Three major business sectors are working together, and cloud computing is emphasized independently

From the perspective of Huawei's three business segments:

In addition, as an emphasis on cloud computing, Huawei also specifically introduced its situation. 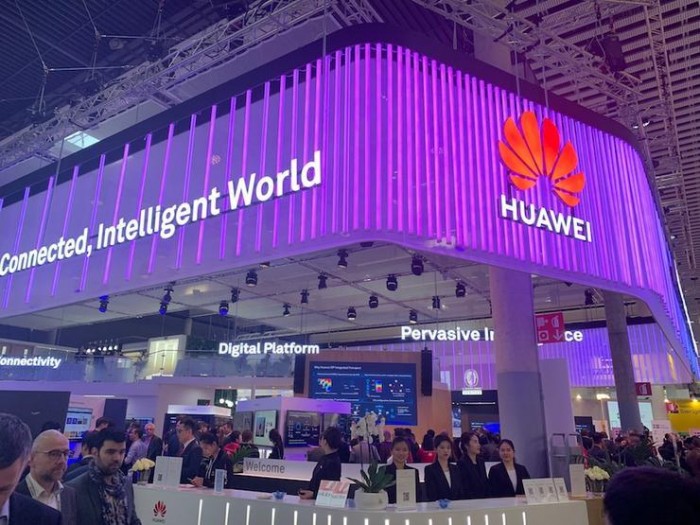 In Q1, in the first quarter, Huawei Cloud opened its business in Singapore, releasing the AI ​​model market, and the one-stop AI development platform ModelArts won the world championship in image recognition training and reasoning on the Stanford DAWNBench list. In terms of quantity, as of now, more than 1 million enterprise users and developers have chosen Huawei Cloud.

For this report, Huawei's evaluation is that the company focuses on ICT infrastructure and smart terminals to improve efficiency and quality, and the business results are stable.

For the first quarter of 2019, the most eye-catching number is clearly the shipment of more than 59 million Huawei phones.

Previously, on several occasions, Huawei's consumer business CEO Yu Chengdong once said that in 2019, Huawei's smartphones (including Huawei brand and glory brand) had global mobile phone sales targets of 250 million units to 260 million units, making it the first in the world. He also said that for every three units sold in China, there is a Huawei mobile phone. In 2019, Huawei's goal is to have one for every two sold, that is to say, the market share in China is over 50%.

Based on Yu Chengdong's frequent rumors and repeated implementations, this time the world's first goal is no longer questioned. Then, with the shipment of 59 million smartphones in the first quarter, can the sales in Yu Cheng Dongkou be realized?

Since the sales week of smartphones will show different results according to the season, we may refer to Huawei's sales in 2018 for reference. Taking the data from the market research organization IDC as an example, Huawei's smartphone shipments in the four quarters of 2018 are:

It can be seen that if the approximate year-on-year comparison is made according to the Q1 data, Huawei Q1's smartphone shipments increased by 50.13% year-on-year, which is a strong growth performance. If this growth momentum is estimated, Huawei will be in 2019. For smartphone shipments, it seems that it is not difficult to achieve the goal of 250 million. After all, in 2018, the total shipment of Huawei mobile phones has exceeded 200 million units. According to IDC data, Huawei’s shipment data in 2018 is 206 million units).

So, can Huawei become the world's number one smartphone manufacturer?

From the situation in 2018, Samsung shipped 2.923 mobile phones, which is nearly 90 million higher than Huawei's. Compared with Samsung's shipment of 317.7 million units in 2017, it decreased by 8%. If this trend is followed, Samsung's shipment performance in 2019 may continue to show a certain degree of year-on-year decline. 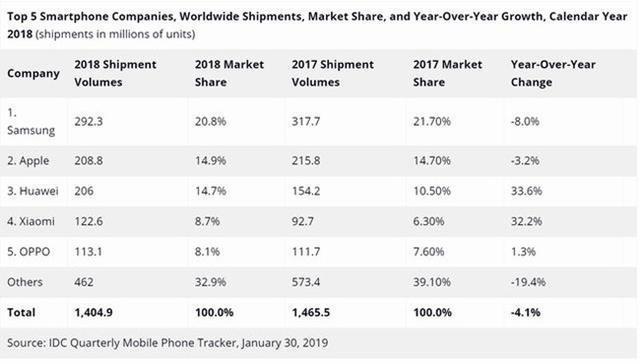 However, despite this, it is not easy for Huawei to surpass Samsung to become the world's number one. Samsung has strong technical strength, complete supply chain and huge channels. Huawei's growth momentum is strong, at least from the current situation, it can only be said that it is possible, but the probability will not be particularly high - of course, Yu Chengdong Did not say anything to death, even if the final result is close to Samsung's sales performance, Huawei is also completed the task.

Related news
Huawei Q1 smartphone shipments skyrocketed by 50% to become the world's first stable?
IDC: European smartphone shipments Q1 fell 2.74%, Huawei and Xiaomi moved against the trend
China's smartphone market cools down in Q1, and shipments will decline by 30%
Q1 mobile market share announced: Huawei is the second largest in the world and the first in China
Xiaomi Q1's performance against the trend grew faster than expected, and the two engine strategy continued to achieve results
India mobile Q1 shipments out! Domestic mobile phone dominates Samsung's list
Q1 the world's mobile-phone market has suffered the worst downturn ever: why is Xiaomi the only one to rise against the trend?
Global smartphone shipments fell 11% year-on-year to 314 million units in Q1, according to the data
Apple became the second largest smartphone vendor in Q1 in 2022
Hot news this week
China has found 35 known cases of the new zoonotic virus Langya
Losses in a single quarter of $ 23.4 billion a record, SoftBank did not carry the plunge of technology stocks and the devaluation of the yen
The prevention and control of the American Monkey epidemic has failed. What should I pay attention to?
Kuaishou launched a self-developed cloud intelligent video processing chip: The chip has been streamed successfully
The new product of Xiaomi MIX is coming: both internal and external dual -screen has been upgraded to make up for the previous generation.
Ministry of Public Security: Single telecommunications network fraud continues to cause 40 % of all electrical fraud cases
A new zoonotic virus, Langya, found in China has not yet been confirmed to be transmitted from person to person
A tech company in Shanghai has been fined 220,000 yuan for swiping orders to improve its ranking on Yelp
Special price "kill ripe"? Bike-sharing platforms have different prices for the same package for different users
Alibaba: Shareholders SoftBank will settle in advance for advanced payment in advance involving a maximum of about 242 million ADR
The most popular news this week
Google Fiber's home has been silent for many years and continues to expand after many years
Gurman: Apple is going to expand advertising into the new iPhone/iPad area
Studies have shown that the attacks by the game company have doubled in the past year
Apple's new iPad does not support 3.5mm headphone hole, Baidu map big update, anchor adopted two protected plants were checked, Rui Dragon 7000 series price stolen, these are the o...
A proposed ban on Internet addiction in California has failed
Industrial star attraction strategy to cope with the American semiconductor strangulation strategy
"Mother of the Chip" suffers! The United States blocked EDA to China: not so simple
8K Super Clear screen records Lingyue of China Space Station! Only 0.72 seconds
Sell to Tencent less than a year Sogou by the big purge: three major businesses are gone
After being suppressed by the United States, why did Ren Zhengfei thank you?