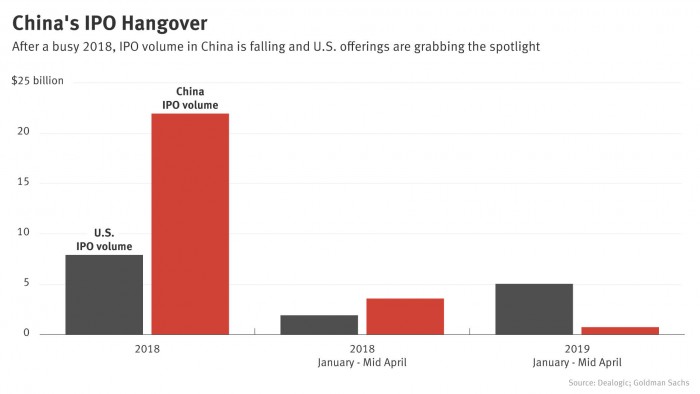 Graphic: Comparison of IPO scales between Chinese and American technology companies in the near stage

Although China has a series of the world's most valuable private technology companies, Alibaba's subsidiary Ant Financial is valued at US$150 billion, Didi's travel valuation is US$56 billion, and the bytebeat valuation is 750. One hundred million U.S. dollars. Although bankers have discussed IPO issues with these companies, investors and other people familiar with the matter say they have no clear listing plans.

According to Dealogic's data, Goldman Sachs said that from January to mid-April, the total IPO of Chinese technology companies in the international market was only $740 million, compared with $3.6 billion in the same period last year.

In contrast, 2019 will be a landmark year for Silicon Valley companies to conduct IPOs. The car company Lyft, the picture social Pinterest and the video conferencing company Zoom have raised billions of dollars. Goldman Sachs said that the total IPO of US technology companies has exceeded $5 billion, much higher than the $1.9 billion in the same period last year. Lyft's competitor Uber is expected to launch an IPO next month, which will be one of the largest IPOs in history. This wave of IPO boom is in stark contrast to the situation in 2018, when Chinese technology companies raised $22 billion through IPOs, almost three times the amount of US$7.9 billion in IPO financing from US technology companies.

Of course, there are still some Chinese technology companies that will conduct IPOs in 2019. According to people familiar with the matter, the video sharing application is considering listing in the US this year and may raise about $1.5 billion. Prior to this, the company had been trying to raise funds through a round of financing before the IPO, with the company valued at $25 billion. Fast supporters include Sequoia Capital, Tencent and Baidu. Quickly refused to comment on the matter.

Rui XingcoffeeA prospectus was filed with the US Securities and Exchange Commission last week and is scheduled to be listed on the NASDAQ. But the company suffered a serious loss in the process of competing for market share. In addition, Tencent's game streaming application, Betta, is also available for listing in the US.

People familiar with the matter said that bankers have been negotiating with Chinese start-ups on the listing of the Hong Kong Stock Exchange. The byte beat operates the popular TikTok video application. However, some investors in the company said that the bytebeat before the listing needs to meet the challenges of overseas markets. Apple and Google recently removed TikTok from local Indian app stores, and India is the most important market for TikTok. Fortunately, India withdrew the order, and TikTok resumed its operations in the local area. In the US market, although the download volume of TikTok has been nearly 100 million times, it is difficult to retain users. Bankers say the IPO date of the bytebeat has not been determined. The company declined to comment on the IPO plan for media coverage.

At the same time, Chinese start-ups in the later stages are paying close attention to the poor stock performance of major Chinese technology companies listed last year. The US group public opinion listed on the Hong Kong Stock Exchange is currently about 20% lower than the IPO price in September, because the company burned a lot of money in the fierce competition with Alibaba. And listed on the Hong Kong Stock Exchange last June.MilletThe share price also fell about 30% from the issue price. In contrast, the share price of e-commerce startups listed on the Nasdaq is much higher than the IPO price of July last year.

The listing plans of some fintech start-ups have also been adjusted. Lu Jin, an online financial services division of Ping An Insurance, postponed the IPO last year and is currently withdrawing its P2P loan business. A spokesperson did not respond to the request for comment. Online loan startup No. 1 has previously planned to conduct an IPO in 2018, but the company has closed most of its offline stores and has been shrinking.

Alibaba Cloud - Up to 1888 yuan universal vouchers are immediately available