Microsoft is back on the browser track. Can the new Edge overturn Chrome? 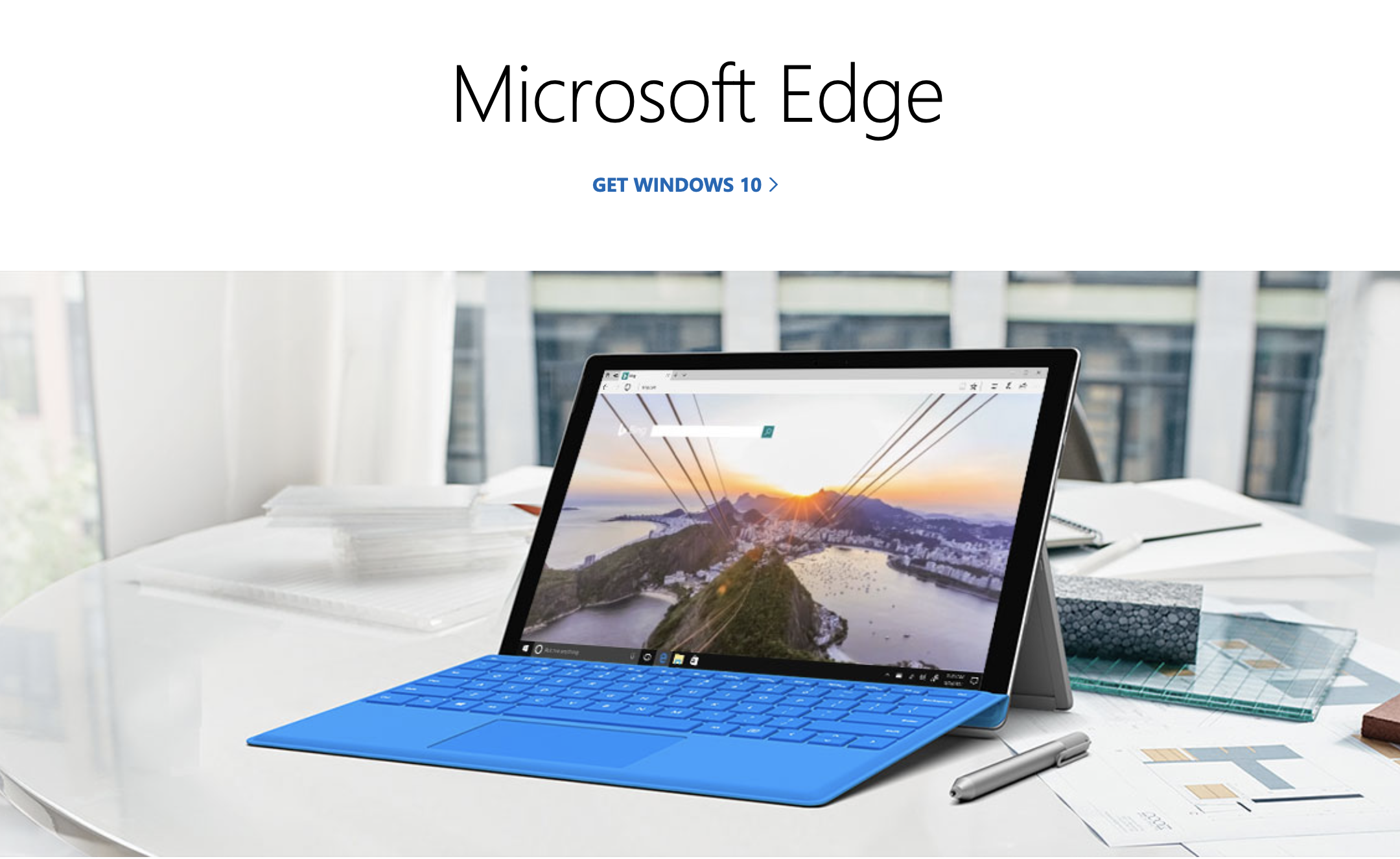 IE, once the monopolist, is now Edge, the marginal.

On May 6, local time, Microsoft held its annual Build 2019 Developer Conference the day before Google. Apart from Azure, Microsoft's most important cloud service, Edge, Microsoft's refurbished browser, has received the highest attention from the outside world. 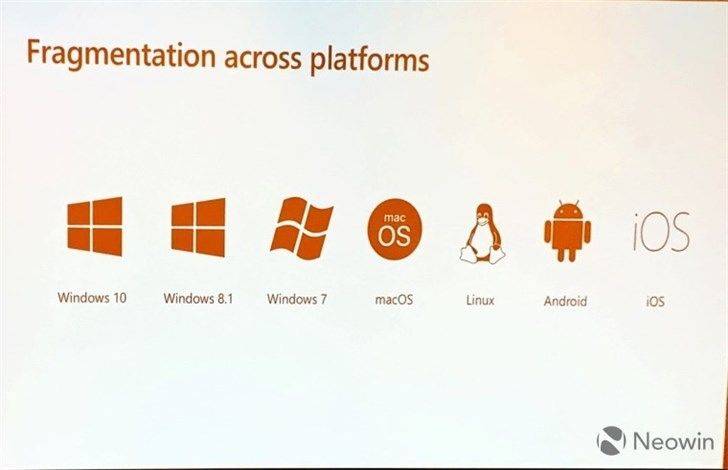 Pictures on the agenda of Build 2019

At the same time, Microsoft has demonstrated many new features and services of Edge, as well as the debut of the Mac Edge.

With the addition of IE mode, Edge, which was announced at the end of 2018 based on open source Chromium, has integrated Microsoft's technology accumulation in IE software for decades, transformed into open source, and broken the closure of its development and compatibility. AcceptIn the interview with The VergeJoe Belfiore, Edge's head of development, said that Edge's IE model aims to achieve seamless connectivity. Without the classic E-Sign of IE in Edge, users simply can't detect whether it's IE or Edge.

Despite the rapid development of the Internet, IE is still the only choice for office enterprises and basic social services around the world. Edge's "IE mode" is to integrate IE into Edge as a "function". Web pages that are only compatible with IE browsers can be opened directly in Edge. At the same time, Edge has more functions, better official support and more humanized design. After the "non-IE can't be opened", users have no reason to choose IE as an outdated one. Browser.

The second key function focuses on Internet privacy, which has attracted much attention in recent years. Microsoft provides three privacy modes for users to choose on the new Edge: unlimited mode, website and browser plug-ins can track users and push advertisements given by algorithms; balanced mode, pages that users have not visited are not allowed to track user data; strict mode, all websites, plug-ins and advertisements are not allowed to track users. 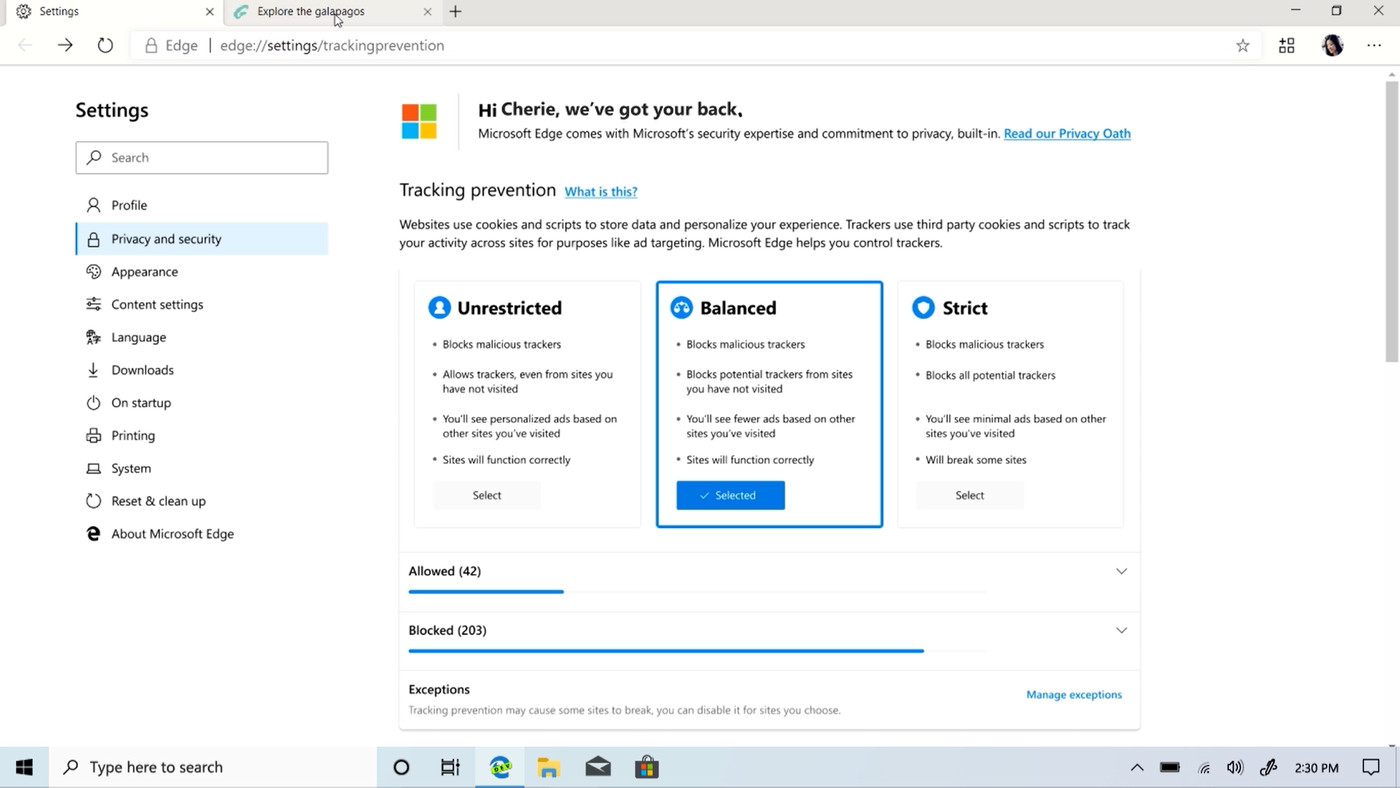 In addition, an official plug-in-like feature has been added to the new version of Edge, which aims to allow users to collect, organize, and share information through the browser's built-in features on the information-exploding Internet. The Collections feature will also support linking with Office, such as opening a favorite file directly with a Office suite, creating a table in Excel with a single click of the collection's comparative data, and importing the contents of a favorite web page directly into Word

Edge with Chromium kernel will also support rich extension plug-ins like Chrome. At present, all plug-ins in Chrome Web Store can be installed on Edge, and Microsoft is launching the Edge Extension Store. 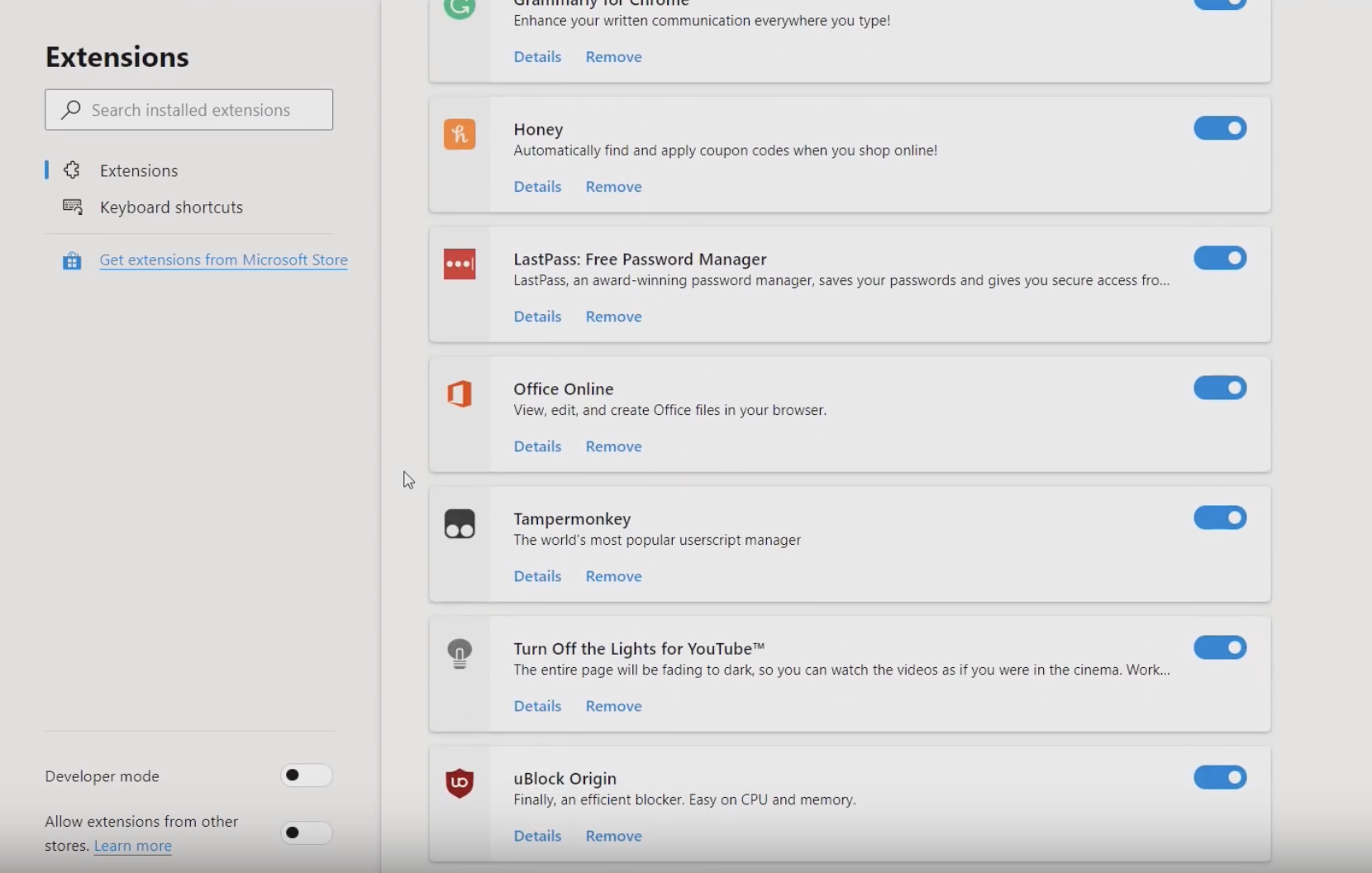 The Mac Edge will also be divided into two versions, Dev for developers and Canary for ordinary users. Although no specific release date has been announced, Microsoft has released demo animations at Build 2019.

One month before Build 2019, Microsoft released its first major Edge improvement after switching to the Chromium kernel. In the Public Beta version, Edge not only showed a design language similar to Chrome, but also improved the key functions of 4K video support, browser security, interface layout and other browser products.

As far as the new Edge promotional video released by Microsoft today is concerned, the multi-platform, open source core and fully functional Edge has shown a little potential for a highly competitive browser product.

Edge has officially replaced IE's default browser in Windows 10 and Windows 10 Mobile since the first preview was released on March 30, 2015. IE, once a monopoly industry, has thus moved to the edge of the historical stage. This time, however, Microsoft not only revived IE in Edge, but also revived Edge.

Edge has been quiet since its launch in 2015. Google Chrome has dominated the browser with its rich functions and accumulated cross-platform users over the years. Apple's native Safari enjoys its perfect integration into the ecosystem of the Apple system. Firefox also has a place with "neutrality" and "operability". IE has long been reduced to an apprenticeship, but it can't. Products that do not need to be used. Edge hasn't made any splash since it was launched. In the mobile Internet environment, both browsers have no names.

Statcounter's share of the global browser market in April 2019

However, Edge is also under pressure from industry leaders after "core-turning". Just as Google launched Chrome against IE monopoly in the browser war more than a decade ago, Apple had to set IE as a default browser in order to enable Microsoft to develop the Mac version of Office suite. Since Apple launched Safari in 2003, Microsoft and Apple have no more. Development on browsers intersects until Edge for Mac is launched.

In the interview with The VergeJoe Belfiore mentioned Edge's dilemma in testing Chromium last year. Although Google and Microsoft engineers worked together in the process of switching to the kernel, so much so that Edge and Chrome were very similar. From the point of view of Chromium as an open source project and related community, Google welcomed Microsoft, but from the point of view of competitors, Chrome was the same. You have to guard against Edge. On desktop systems, the difference between the share of Chrome OS and Windows is much larger than that of browsers, and Chrome outweighs IE. In the future, Edge will be backed by Windows and Safari will have full support for MacOS, but Chrome OS, like Microsoft's struggling Windows Phone, has no hope of grabbing the market.

Shortly after the new Edge released its public preview, many users reported that many Google products, such as Google Docs, Google Meet and Google Earth, had problems accessing Edge. In Google Docs, the "unsupported browser" notification is displayed directly, while in Google Earth, the status of Web page denial is displayed. In response, Google said that because the new Edge is a temporary development preview version and has not yet been added to the white list of relevant Google pages, the official version will be added to the white list.

Last month, former Mozilla executives, who had worked on the Firefox team for eight years, also attacked Google on Twitter, saying that Chrome ads would appear in Google search results for Firefox, and that related Google pages labeled Firefox as "incompatible" browsers. Every time a user finds it, Google calls it an accident and fixes it as soon as possible, but the error always repeats. 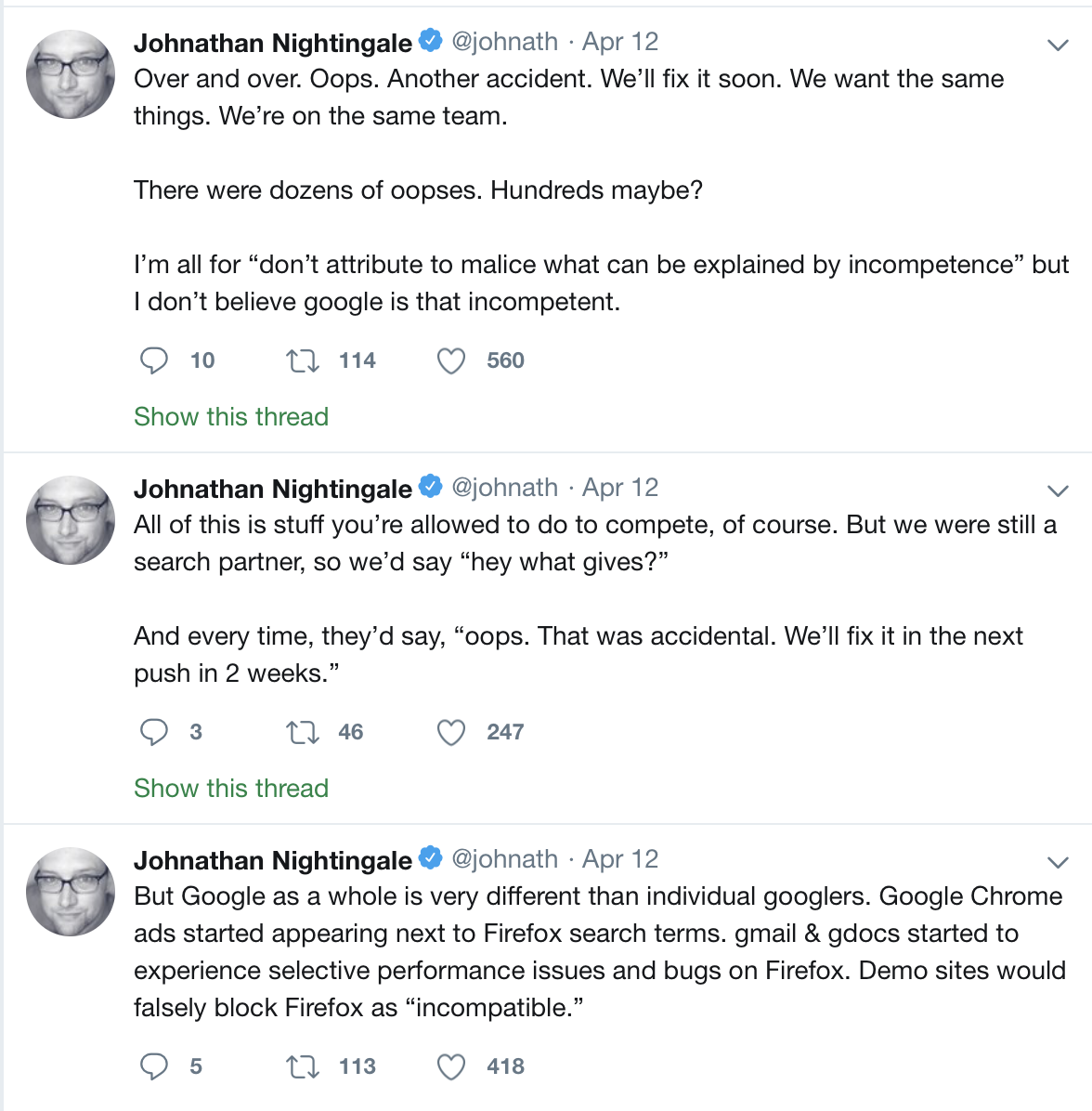 From the monopoly of Netscape, which once occupied 90% of the browser market, to the IE as the rule maker of the industry, and now to the super-strong, the browser market competition has changed with the popularity and use of the Internet. Today's browser market is inseparable from the giants and can't afford to open up. The hosting tool of this Internet-based service is still strong under the impact of the application again and again. Both Google and Apple have seized the application, and Microsoft’s monopolist in the browser has long been a marginalist. Can it be heavy again? Back to the mainstream track, it is necessary to change the core and not forget the old Edge.

Related news
Microsoft is back on the browser track. Can the new Edge overturn Chrome?
The new version of Microsoft Edge uses Chrome's roadmap to eliminate Flash
Microsoft edge has more privacy violating telemetry than other browsers
Is it good for edge to switch to Google kernel? The black history of grilled Chrome
Microsoft Improved Microsoft Edge Rolling Experience
Microsoft edge browser ushers in "surfing the Internet" game
[tip] Microsoft edge now also supports sharing websites through QR code
Hot news this week
Biden signed a chip and scientific bill, a video call of WeChat iOS internal test suspension window, the advanced CPU caused Win11 to be difficult to use, Huawei new machines enter...
How to regulate the "broken card" operation to crack down on electrical fraud to prevent "accidental injuries" with cards?
Musk's eyes! Lei Jun released a full -size humanoid robot Xiaomi self -developed strength explosion table
Japan has confirmed that China has overtaken the US for the first time in the world's top three indicators of scientific papers
iPad 10 will be absent from iPhone 14 conference: October appeared on Apple's last non -comprehensive tablet tablet!
The three major indexes of the US stocks opened sharply: ROBLOX fell more than 4%, Twitter and Tesla rose more than 3%
Kuaishou TOB business Yu Bing: Self -developed chips or mass production after the end of the year, the video must be turned into light industry
The global streaming media have increased the animation circuit is becoming a new "breakthrough" for Youaiteng
Meizu Pandaer Great: All products are reduced by 200 and 30 -containing mobile phone cases, heat dissipation back clamps
After selling Tesla for $6.9 billion, Musk said he was not selling it, but a survey said he was still selling it. The title of the world's richest man may not be guaranteed next ye...
The most popular news this week
The survey shows that nearly half of the US Android users consider changing Apple iPhone
New bottle of old wine! Industry insiders: No one has the best cost control than Apple
Amazon requires US regulators to withdraw votes: bypassing the company's harassment of Bezos to disturb operations
Pet dog infecting monkey acne suspected "Human Poor" American CDC Reform Control Guide
Space Launch System to Fly for First Time
Tencent's second-quarter net profit fell 56% from a year earlier to 18.6 billion yuan
Fabless customers cut back on chip orders affecting Q4 capacity utilization
Washington's suspicion of TIKTOK exacerbated: How will the Bayeon government weigh it?
Pinduoduo launched its cross-border e-commerce platform in the United States in September
Put an SSD in your phone: from 2,499 yuan