The White House hopes to add a $1.6 billion budget to NASA to accelerate the return to the moon 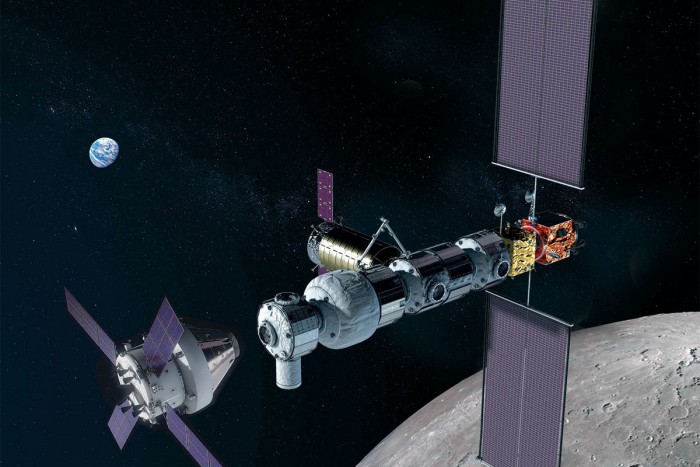 The funding proposal was presented in a new budget amendment made by NASA officials over the past two months, with comments from the White House. Additional funding is designed to help NASA complete the challenge that Penns has proposed to send astronauts to the moon over the next five years. In a speech at the National Space Committee meeting in March, Burns said that NASA's initial goal of sending humans to the moon by 2028 is "not good enough."

In a speech, Pence said NASA Director Jim Brendenstin gave details five minutes before his speech. But it soon became clear that the details of the plan-the budget and the structure-had not yet been determined. Now NASA is ready to release these details after weeks of debate. 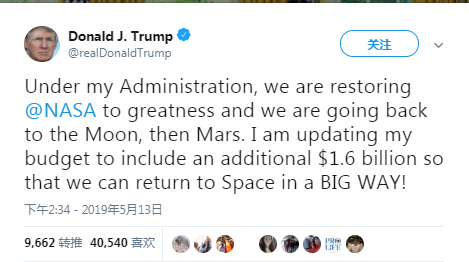 Of the $1.6 billion required by the agency, $651 million was used to accelerate the development of NASA-developed vehicles: a large new rocket called the Space Launch System (SLS) and a new type of capsule called Orion. The purpose of the Orion capsule is to bring humans into deep space and into the moon. These vehicles should fly together for the first time in 2020, marking the debut of SLS. However, the launch date for 2020 is still very uncertain.

In addition, a budget document issued under the announcement shows that $1 billion will be used to begin the development of the lunar lander, which can bring people to the surface of the moon, "three years earlier than previously envisaged." But when the lander plans to get huge financial support, NASA is also downgrading other lunar projects. As part of its lunar program, NASA has been planning to develop a new space station called Gateway around the moon. This new platform is designed to be the outpost of the moon astronauts, where they can live and train before going to the moon's surface. NASA envisions that this lunar space station is made up of modules that can be designed to live or provide power and propulsion.

However, in order to land on the moon faster, Bridenstin said that NASA may focus on a smaller version of Gateway - a single power module and a small habitat module. In the president’s initial budget request, Gateway received $824 million, but the amendment required the budget to be reduced by $321 million.

Most importantly, $132 million was earmarked for the development of new technologies needed for the return of the moon, such as new propulsion devices and hardware that can convert ice from the moon into water. The final $90 million will be spent on science, which will add "the robot explores the lunar polar regions before human missions."

After posting a tweet by Trump, Bridenstein said that NASA will work with aerospace companies to carry out this work. “We envision a strong business partnership that will help increase innovation and reduce the cost of US taxpayers.”

Many commercial companies have been eager to join. After Pence announced the ambitious lunar strategy, a number of companies, including the Blue Origin of Lockhid Martin and Jeff Bezos, have begun to study how to help NASA return to the moon more quickly.

Related news
The White House hopes to add a $1.6 billion budget to NASA to accelerate the return to the moon
NASA's plan to return to the moon was blocked by $1.6 billion in additional funding rejected
Trump thinks NASA's plan to return to the moon is not radical enough.
NASA says it will cost an extra $20 to $30 billion to send astronauts back to the moon
NASA says Australia will help support its Artemis and Moon to Mars programs.
NASA's'Moon to Mars'project may face huge changes
Trump is enthusiastic about landing on Mars! Ask for a 12% increase in NASA's budget for next year
Big house saves money! RMB 299 millet, ax1800 can be matched with ax3600 mesh
Hot news this week
Foreign media revealed White House documents: the ban may make apple and Google "off the shelves" tiktok
Qualcomm lobbied the US government to lift the ban on the sale of components to China
Tencent re racing e-commerce, but does not want to make the next pinduoduo
Understanding Xiaomi's AB side in ten years with 12000 words
Xiaomi 10 supreme commemorative edition press conference Lei Jun's live rehearsal
After the sesame seed, Alipay's "financial points" is officially launched: let's see how much you have.
Lenovo YOGA e-book official Xuan :4 G All Netcom support phone calls SMS
Liquid nitrogen overclocking ASUS motherboard bw2020 highlight time
Huawei is just 30
Power of faith ASUS main board makes bw2020 wonderful
The most popular news this week
Microsoft sends three videos to introduce the features of surface Duo
Kylin's top performance! Huawei mate 40 / 40 Pro screen steel film exposure: Pro version adopts super waterfall screen
Central bank: Digital RMB is the best tool to replace cash as long as the mobile phone has electricity
U.S. extended time to block tiktok in U.S.: more time to prepare for byte skipping
Li Kaifu's comments on Xiaomi's biography "go all the way"
NASA celebrates 15th anniversary of Mars Reconnaissance Orbiter in space
U.S. immigration and Customs Enforcement signs contract with facial recognition technology company Clearview AI
A U.S. official working group survey UFO： will publish video
Mozilla cuts a quarter: free model is hard to continue, making money is the top priority
Ubuntu 18.04.5 and 16.04.7 lts release