Recently, IDC released "China AI Infrastructure Market Survey Report 2018". In 2018, China AI Infrastructure Market sales increased by 132% year-on-year, and the overall sales reached 1.318 billion US dollars. Among them, the wave sales amounted to $660 million, still accounting for more than 50.1% of the total share, ranking first with the absolute advantage of more than half of the market share for two consecutive years. 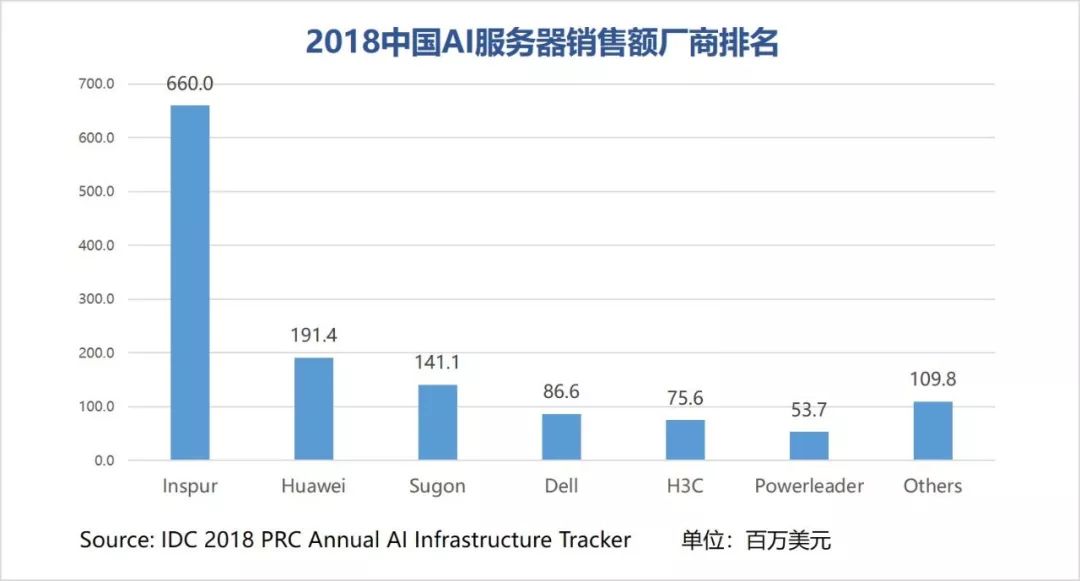 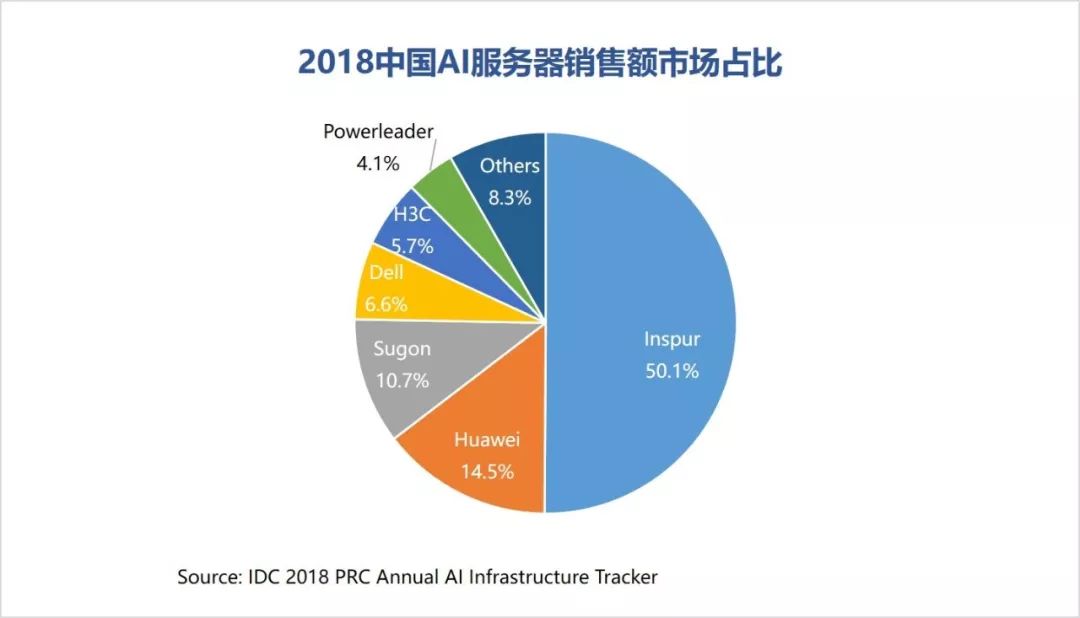 IDC data show that GPU servers continue to grow at a high speed in 2018, with sales increasing by 131.2% year-on-year, which remains the mainstream of AI infrastructure, accounting for 99% of sales. Among them, nearly 80.4% of sales come from GPU servers with more than 4 cards, accounting for 80.4%. 16 cards GPU servers have grown rapidly, with sales increasing from $20.9 million in 2017 to $263 million in 2018, up to 1161.7% year-on-year. The proportion of GPU servers in the overall share of GPU servers has risen rapidly from 3.7% in 2017 to 20.4% in 2018. The market has an absolute advantage, with a share of nearly 80%. The 16-card GPU server shows a high-speed growth trend, which indicates that with the explosive growth of data and the increasing complexity of deep neural network, a single system can provide a higher-density and higher-performance AI infrastructure, which will be more widely used in AI off-line training scenarios. 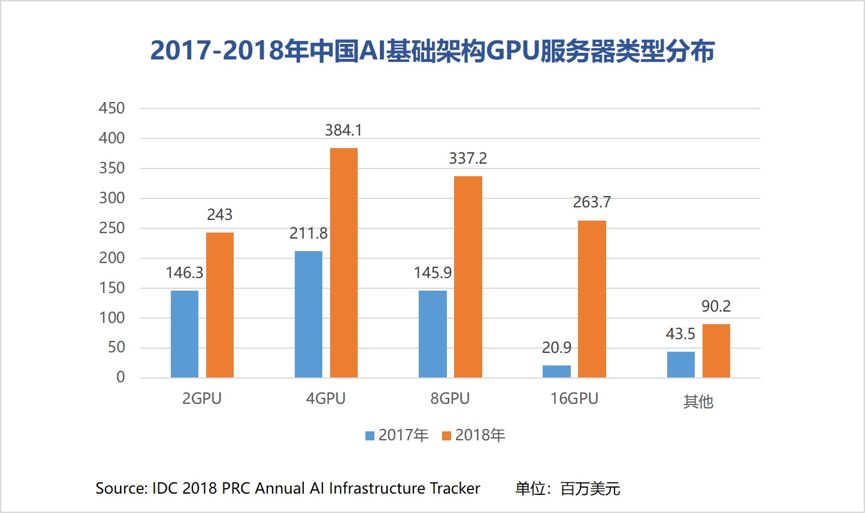 Currently, the wave is the most complete manufacturer of GPU server product line. It covers different AI computing platforms from 4 cards to 64 cards cluster, and meets the training needs of super large-scale model from small-scale sample training to 100 billion samples and trillion parameter level. SR-AI is the first AI scheme designed with PCIe Fabric interconnection architecture in the world. It can support 16 GPUs and 64 GPUs. It has been successfully applied in large-scale AI training such as unmanned driving.

It is noteworthy that acceleration cards for online reasoning scenarios grew rapidly in 2018. According to IDC data, sales of M4, P4 and T4 in GPU increased from $48.1 million in 2017 to $360 million in 2018, and their share increased from 8.5% to 27.6%. Among them, P4 sales increased 691% year on year. At the same time, in 2018, the sales of FPGA reached 13 million US dollars, a sharp increase of 1757.1% compared with the previous year, and the market share increased 10 times compared with 2017. This trend shows that AI in China has gradually entered the stage of large-scale application and the process of industrial AI is accelerating.

The Internet remains the largest market for GPU servers, and the government market is growing rapidly.

IDC reports that the Internet remains the largest vertical area in the GPU server market, but end users in traditional industries have begun to adopt AI solutions and deploy GPU servers.

The data show that the top five industries of AI infrastructure scale in 2018 are: 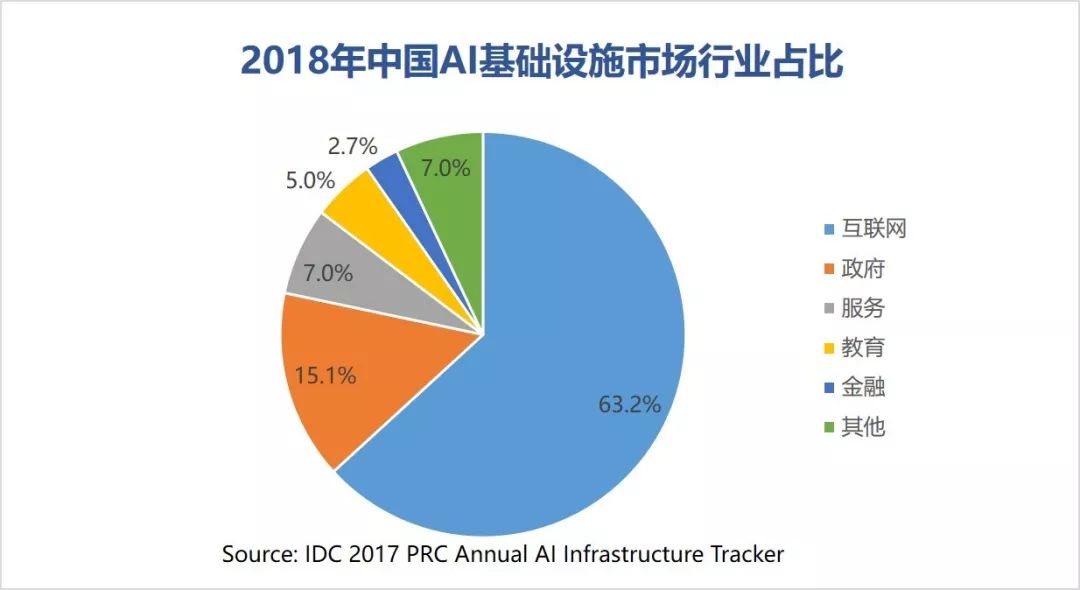 Although the Internet is still the largest market, its share has declined for the first time, from 71.6% to 63.2%. The share of government industry has doubled, from 7.5% in 2017 to 15.1% in 2018, thanks to security, urban brain and other AI application scenarios.

The growth data also show the acceleration of AI penetration in the industry. The top five industries are:

According to the IDC report,

At present, traditional industry users mainly use AI technology for video/image recognition and audio recognition. Their business scenarios include anti-fraud, video surveillance analysis, intelligent customer service, precision marketing, medical image recognition and so on. For traditional industry users, the biggest challenge of AI application lies in the lack of technical capabilities in platform, application development, and model and algorithm adjustment.