President Glory: The product will not be affected by the U.S. ban. 5G mobile phone will be launched in the fourth quarter

(Original title: Zhao Ming: Glory products will be pushed 5G in the fourth quarter without being affected by the international situationMobile phone) 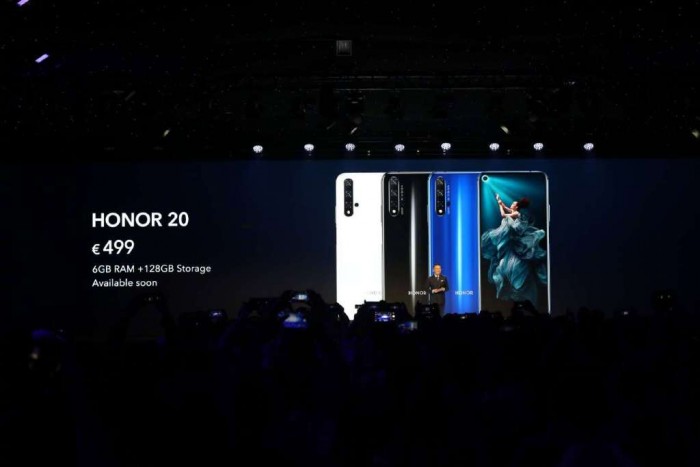 Zhao Ming, president of Glory, explained that it was a month late because Glory wanted to build a product that consumers liked without any discount. According to its disclosure, the Glory 20 series lasted 390 days and nights and eventually appeared.

Glory 20 Pro brings together hard core technologies such as 48 megapixel HD lens, industry's largest F1.4 aperture, 204800 ultra-high ISO sensitivity, double OIS four-axis optical shake-proof and so on, and achieves DXOMARK's second global achievement with 111 points. At this time, this product can be said to be the best answer to the current tense situation. Zhao Ming said that the glory of existing and ongoing products will not be affected by the current situation, there are also corresponding devices and chip alternatives.

"We're sure to keep going." Zhao Ming affirmed, "We will also launch 5G mobile phones in the fourth quarter of this year."

Glory is unaffected by existing alternatives

On May 16, the U.S. Department of Commerce's Industry and Security (BIS) willHUAWEIThe inclusion of the so-called "entity list" means that Huawei cannot buy components and other products from American companies without the permission of the U.S. government.

In response, Huawei responded aggressively that the decision would cause huge economic losses to the American companies that Huawei cooperated with and affect tens of thousands of jobs in the United States. Huawei will seek relief and solutions as soon as possible and take active measures to reduce the impact of the incident. Huawei founder Ren Zhengfei and Huawei executives have said that Huawei has backup and spare tire start-up.

In such a tense situation, Glory still chose to hold a conference overseas and released a new product in the first half of 2019: Glory 20 series, which is the first flagship new product launched in a serialized way.

However, the product is more than a month behind schedule. "We delayed and hoped that we could polish it carefully. This time, we did not have any discount to build a product to consumers. This is the change in the rhythm control of our product planning this year. This product series lasted 390 days and nights." Zhao Ming said.

Zhao Ming stressed that Glory's business strategy will not be affected by the current situation and changes, on the contrary, Glory will be more active and proactive.

"Glory existing and ongoing products will not affect, can continue to sell. We also have alternatives for devices and chips. Zhao Ming said, "We will certainly continue to move forward."

According to reports, Glory will launch 5G mobile phones in the fourth quarter of this year according to the rhythm.

At the end of 2017, Zhao Ming announced that the new strategic goal of Glory Brand will be to achieve the top five in the world in three years, and strive to achieve 50% of China's and overseas markets by 2020 (50% of domestic and 50% of foreign markets respectively). At this time, the international situation has not changed as it is today.

Glory ranks seventh in global smartphone sales in 2017, with Internet brands both online and offline in January 2018, according to GfK. Zhao Ming is confident that glory will enter the top five in the world in the next three years.

"We did not expect such a change in the international situation, but we felt that boots would always fall to the ground. As long as the boots fall to the ground, in any case, the direction and goal will become the only one for us.

This means that the goal of glorifying three years into the top five in the world will not change.

For this year's mobile phone form, Zhao Ming said very early: this year will be a "strong wind knows grass" year, will be more difficult. "In this case, the company's bottom line and ultimate strength, the core concept of the whole company will be displayed, you can look at the comprehensive performance of various brands, manufacturers in this year, when the pressure comes, you can see the real performance."

The so-called industry is the most difficult year. In addition to the market has been declining, technological innovation of mobile phones has also met bottlenecks. Only when Chinese enterprises enter the no-man's land can they have a breakthrough and win global respect.

Therefore, at present, the new position of glory is no longer entangled with a single fixed opponent, but firm and clear strategy, follow the strategy.

"The key to win the market competition this year is whether the strategy is clear and what are the core competencies? To some extent, our core competence is in product innovation and quality, which is the strongest part of the glory. Zhao Ming thinks.

"Glory certainly doesn't say to throw away the strongest part and follow others. It's something that you can't learn. It's like someone says that we're good at marketing, and it's necessary to learn marketing from us."

It was revealed that in addition to products, Glory will work hard on the next step in terms of software and operating system experience.

Related news
President Glory: The product will not be affected by the U.S. ban. 5G mobile phone will be launched in the fourth quarter
The linely group's best mobile processor of the year: God u Kirin 810 wins the title
"Generation God U" Kirin 810 gets The Linely Group's annual "Best Cell Phone Processor Chip"
5g mobile phone "nuclear bomb" attack glory 30s first evaluation: in depth decryption of a generation of God u Kirin 820
Zhao Ming: Glory 30 S Let people who really want to buy 5 G phones don't hesitate
Jingdong's hottest 5g mobile phone, glory 30s, new color scheme, first sale today: 2399 yuan
U. S. cellular starts 5g millimeter wave deployment with Nokia and Ericsson
Hot news this week
Huawei Chinese Academy of Sciences key EUV lithography machine? ASML Chinese Engineer: Arabian Nights
China Semiconductor new era: world's largest Gan plant built in Suzhou
Baidu curiosity night ignites 10.8 billion people to participate in interaction and redefine science and technology evening party
Has soared to 54,000 Wechat and downloads surged in the U.S. over the weekend
Huawei CEO Ren Zhengfei leads a team to visit CAS: Discussion on basic research and key technology development
Samsung Galaxy S20 Fe has been first exposed in the video
The AirPods Studio is said to be equipped with a U1 chip, ultra-broadband, which is said to be critical to future apple ecology
Baidu curiosity night show AI black technology every one is worth your curiosity
"Earn 100 yuan a day on wechat" unfair competition was sued by Tencent and the court awarded 20 million yuan
Tencent: existing wechat users in the U.S. may continue to use but cannot obtain new users, and will continue to negotiate
The most popular news this week
How can Chinese in the United States promote the survival of the Jedi through wechat in the 45 day war?
Chip snatching battle: headhunters exploding orders, companies were hollowed out
Li Xueqin shows up in Luo Yonghao's live room with goods: live experience of Netease intelligent steam foot bath basin
More than 65W, one plus 8t standard C-Port quick charging head: eat MacBook and PD fast charging mobile phones
The possible cause of NVIDIA geforce RTX 3080 / 90 crash is related to the capacitance on the back of the chip
Dong Mingzhu: I don't want oaks to close down, but I hope to go out on behalf of China's image
Leading R & D effectiveness Innovation Tencent through the National DevOps Standards Excellence Evaluation
Cool and sassy! "Freedom and color" color determination anti drop mobile phone case release conference is also too good to play!
Rapid implementation of Baidu health e-commerce service strategy on HPV vaccine appointment day
Play games faster and better! Huawei enjoy 20 Plus hand in hand "werewolf kill" surprise attack