IEEE is the next Chinese scholar to China: Does good science have no borders?

Except to inform "Not available"HUAWEIAs reviewers or editors of the peer review process of journals, the e-mail also claimed that "Huawei employees can stay on the editorial board, but they can't process any documents until the company is removed from the blacklist of the Ministry of Commerce".

"If there are currently papers assigned to Huawei employees, please advise them to find alternatives." "We have no choice but to comply with these new regulations," the email added.

IEEE is the world's largest professional academic organization, with more than 400,000 members, covering more than 160 countries.

IEEE China's official website shows that it has more than 20,000 members in China, the vast majority of whom work in top universities and research institutions. In addition, China has more than 150 IEEE members (IEEE Fellow, the highest-ranking member of the association), covering many high-tech fields.

It is worth mentioning that Huawei has always been an important support force of IEEE and sponsored many academic conferences of IEEE. As a technology giant, Huawei also has a lot of cooperation with IEEE, in addition to its employees holding academic positions.

After IEEE ordered the clearance of the email exposure of Huawei experts, Chinese scholars quickly attracted attention and protest.

Zhang Haixia, a professor at Peking University and senior member of IEEE, made a personal statement at the first time, and sent an open letter to the President-designate of IEEE and the editor-in-chief of IETNANO, announcing that she would withdraw from the editorial board of both IENANO and IEJEMS from now on, "until one day it returned to the professional integrity that we all recognized."

Liu Yiqun, an associate professor in the Department of Computer Science and Technology of Tsinghua University, also declared in the circle of friends that "I personally assume the IEEE-related academic positions will be resigned as soon as possible according to the process", and said that "I have asked students not to submit any meetings and periodicals organized by IEEE". In announcing the decision, he said, "If IEEE chooses not to be divorced from politics, I will choose to be divorced from IEEE." 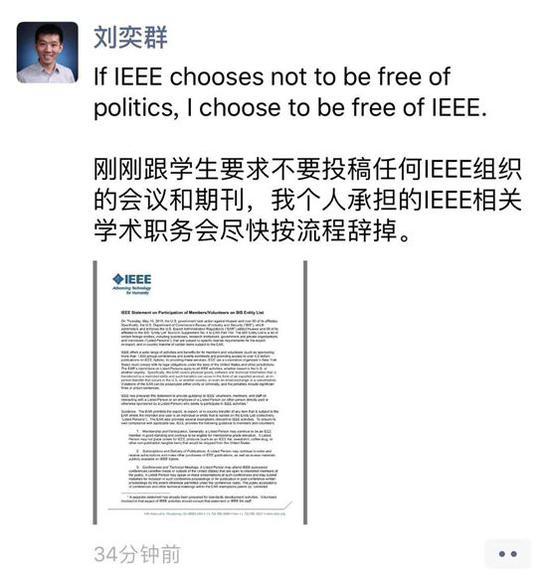 This incident has triggered much more than that in China's scientific and technological circles. Many scholars have condemned the IEEE initiative as "anti-science" and "hindering the progress of science and technology".

Zhang Yunquan, a researcher at the Institute of Computing Studies of the Chinese Academy of Sciences and director of the National Overcalculation Jinan Center: This will tear the international academic community apart

Restricting Huawei's experts from reviewing articles is surprising and ridiculous.

Because all articles submitted are to be published, are open technical information, anyone has the right to access and share, it is only as long as the articles are not officially published before the public use or plagiarism is no problem. Instead of restricting anyone who works in a particular unit or organization to participate in the evaluation activities, it completely undermines the standards and traditions of the international academic community.

Now people are also worried about whether academic organizations such as the International Computer Society (ACM) in the United States will issue similar restrictions after the IEEE ban.

It also reminds us that Chinese academic organizations, such as academies, should strengthen their efforts to promote internationalization, including our academic conferences and journals. They should become more internationalized and go to the forefront of the world as soon as possible. They can also have their own voice and independent development ability in academic journals and activities.

This event will tear the international academic community apart, cause confrontation, hinder the global academic exchange activities, hinder the dissemination of academic ideas and the common progress of mankind.

Explain that it's not Huawei that's hurting. All the IEEE publications can still be seen. What can't be seen on the Internet even if they are not?

It forbids Huawei experts to provide manuscript review services for periodicals. For example, the flowers in the garden can be seen by everyone. Now Huawei is forbidden to water and fertilize freely and voluntarily, which damages the international academic community.

In fact, at least in some areas, it is not from the IEEE publications or various journals to obtain the latest information for a long time. The periodical service is only a kind of reward for the scientific community by the scientific researchers with their own expertise.

However, it is anti-science and hinders the progress of science and technology that qualified experts are forbidden to make returns to the scientific research community.

IEEE is only registered in the United States. It is suggested that experts at all levels of IEEE management within the circle propose to the IEEE to change to Switzerland and other countries to register.

Scientists/engineers in their hearts hope that their achievements can transcend national, national and religious boundaries and serve all mankind. In this respect, American academic organizations, universities and scholars all make us feel convinced, admired and admired.

Although everyone has multiple attributes such as nationality, country and religion, serving the whole human race is still the ultimate goal of most scientific researchers, which can also be said to be a kind of belief.

But in today's view, this goal seems a bit illusory, how fragile this belief appears. In recent days, a series of events, to some extent, will make many researchers suffer a sense of disillusionment. But I believe this situation is only temporary after all.

This is not only an era in which a new order of international economy, trade and science and technology is being established, but also an era in which new ideas, concepts and paths need to be created.

Science has no borders, but scientists have motherland. Similarly, international organizations should not have borders, but they would be restricted by the place of registration.

IEEE does this not only for Huawei, but also for researchers with Chinese background, which violates the purposes of international organizations and makes scientific research tainted with political bias!

As a scholar, today is too angry! The practice of IEEE is a kind of political flattery, which completely destroys academic freedom and academic morality, and should be condemned.

At the same time, we should support more neutral academic institutions; secondly, Chinese scientific and technological circles should increase their support for Chinese and English journals, so as to truly achieve what the General Secretary said, "Write scientific research achievements on the land of the motherland".

At the same time, I also appeal for the reform of the existing talent evaluation system. We should not blindly emphasize international journals and their influence, and break down SCI and ESI as the evaluation indicators of the double-class construction of talents and universities.

Related news
IEEE is the next Chinese scholar to China: Does good science have no borders?
IEEE restrictions: seemingly "forced helpless", in fact, ridiculous
CVPR is quite Huawei's multiple presidents joint statement IEEE's regulations do not affect CVPR participants
In the case of IEEE "reviewing the door", how does the academic community respond?
The English name of Chinese liquor has been changed: Chinese Baijiu has been officially launched
Tesla's Chinese Rivals See Record Monthly Delivery on Further Recovery from Covid
Hot news this week
A small plane in the US has crashed into a 30-metre high voltage power line and got stuck: 80,000 people affected
Can recording others' wechat chat records be used as evidence? The Beijing Internet Court has an answer
Alibaba launched a new cross-border e-commerce platform in Spain, aiming to operate independently in the middle and high-end market
It's not just Huawei! Beidou has penetrated more than 20 industries and applied more than 15.5 million products
When pure water is used in China team to solve the problem of seawater hydrogen production: it is expected to become an original industry
A Tesla crashed into two cars in Taizhou, Zhejiang province, killing two and injuring one, police said
The appearance of Xiaomi's mini console is revealed for the first time: an all-metal body with a strong apple smell
Breaking the spell of "Android 3 year must card", the new Breguet mobile phone will be sold for the first time tomorrow: from RMB3499
Be careful with your phone for a long time! The aunt played with her mobile phone so much that her fingers got stuck
Google's Project Zero team accuses vendors of slacking after ARM GPU bug exposes Android upgrade woes
The most popular news this week
Why is the Apple Pencil 2 not supported? iFixit takes apart the iPad 10 to find out
Zte's experience proves that there is no way out of appeasement and peace can only be fought out
China's growing presence in the global high-tech sector is unacceptable to the US
Us to investigate Lapsus$hack, Microsoft, Nvidia and others were breached
From January to October this year, the number of global travel app downloads approached 2 billion, with China's Amap, Baidu Map and Railway 12306 taking the top three places
With the acquisition of Pulse, Mozilla will develop a new approach to machine learning
Did the United States achieve its goal? More than 40 suppliers went to the United States with TSMC
Microsoft may not be able to offer its Microsoft 365 service in German schools after two years of efforts failed
A record $50 million in compensation! In the final judgment of the dispute over the infringement of Minecraft by Mini-World, NetEase won the lawsuit
Manufacturers like Samsung and Xiaomi have been affected. Google has revealed a dangerous flaw that threatens millions of Android devices