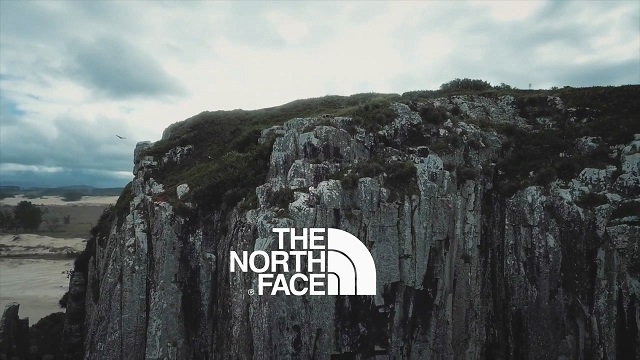 North Face claims to be the first brand to not pay advertising fees to Google.TheVerge)

In an interview with the New York Times, a company spokesman said the incident was caused by a lack of communication between the brand and independent distributors outside the United States. North Face wrote on Twitter:

We are convinced of Wikipedia's mission, but we are also sorry for recent improper actions. We have immediately ended this publicity and will work to ensure that teams and vendors are better trained in website policies.

But in yesterday's blog post, the Wikimedia Foundation was disappointed with the outdoor entertainment company's behavior and criticized Leo Burnett Tailor Made, an advertising agency, for lacking professional ethics in marketing.

In an interview with Ad Age, the agency said that it had demonstrated Party A's products in a completely situational way and found a fairly accurate positioning.

However, even if you can earn marketing gimmicks by breaking through the lower limit for a while, it will still cause more profound damage to the brand's image.

The New York Times points out that North Face has many independent distributors responsible for marketing products around the world. 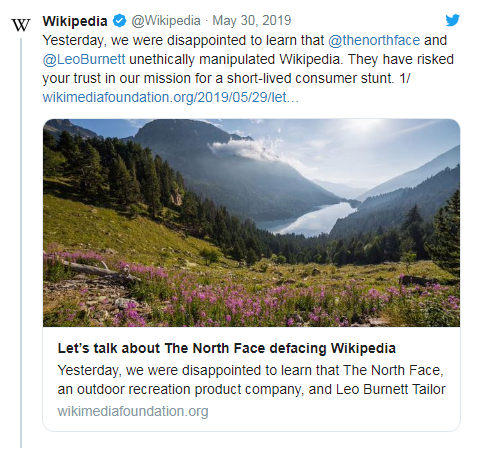 The problem is that Brazilian distributors with exclusive rights to sell the North Face brand have signed a subsequent promotion contract with an advertising company called Leo Burnett Tailor Made, which has caused a lot of trouble.

The advertiser came up with the idea of doing things on Wikipedia, and Brazilian distributors adopted the plan without knowing anything about the North Face brand.

Our mission is to expand our borders and allow consumers to break through their limits. Through the Top of Images campaign, we have achieved our own positioning, and our products are embedded in the same projects as these destinations in a completely situational way.

But it is clear that the North Face brand does not agree with the Brazilian dealer.

Related news
Wikipedia removed photos of attractions that were placed in North Face
North Face apologizes to Wikipedia for improper promotion initiated by Brazilian distributors
Pass 2020 iPhone screen refresh rate 120Hz support ProMotion
IPhone 12 Series in mass production 120Hz promotion displays will be absent (photo)
Sources say the iPad Pro will have an OLED display ProMotion up to 10Hz in 2023
Face ID is coming with a mask! Apple iOS iPadOS 15.4 official version update released
Hot news this week
Young people can't change their mobile phones one brother pressure in the channel inventory up to 50 million
Chinese mysterious female rich 560 million buy European luxury homes: the full amount of cash is paid at a time
Criminal gang candid courier list takes the money 8 people to be arrested
Do you make feed after Yi Lord? Zhenghong Technology M & A has mystery
The first pop -up shop in the United States opened, Bubble Mart opened the North American expansion plan
The goose factory is finally making a move on the metasverse?
The 560m Chinese woman who bought luxury homes has also been involved in JD.com's investments in Tuniu, Vipshop and Fafa Qi
With this charging treasure that can legal "stealing electricity", I don’t worry about the mobile phone out of power
Son's bet that ARM's listing will boost SoftBank's stock price?
Huawei Hongmeng has become! Many mobile phone manufacturers will follow up with Hongmeng OS technology
The most popular news this week
A large number of QQ numbers stolen official announced the results of the investigation
Tencent said major shareholders will sell their shares for a total profit of about 24.5 billion yuan
Born with a silver spoon in one's mouth, IE finally why can't escape the fate of being eliminated?
The first batch of meizu free battery replacement models are announced: Meizu 15 and other five models are listed
Meizu official celebrate Flyme 10th birthday: More surprises, wait for August
The first batch in the country! "Main Driving Unmanned" Autonomous Driving is approved
IPhone 14 revealed the earliest early August mass production Foxconn a large number of recruitment: on entry to send 5400
700MHz gold band! China Radio and Television wechat mini program launched
China Radio, Film and Television has officially announced that ZTE will be the first group to support commercial 5G broadcasting
Japan's chip industry has a 35,000 talent gap? Tech giants warn