Moreover, they strongly support the CVPR program chair, regional chairpersons, and CVPR magazine editors to choose whether or not to review the manuscript. 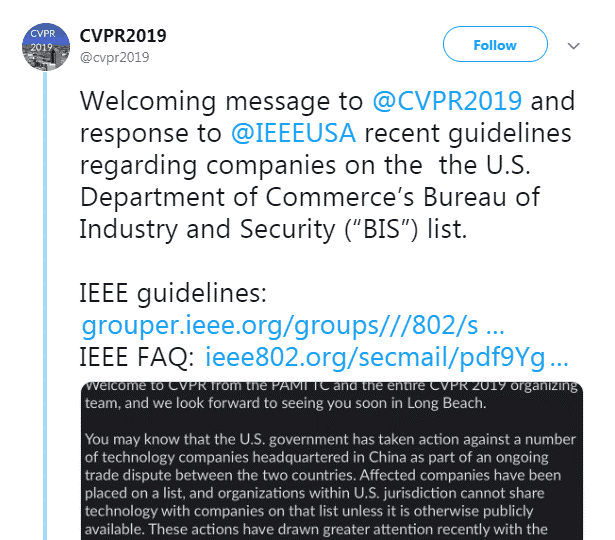 The specific content of the open letter is translated as follows:

PAMI TC and the entire CVPR team welcome you to CVPR and we look forward to seeing you in Long Beach.

As you may know, under the influence of the Sino-US trade war, the US government has already adopted sanctions against a series of technology companies headquartered in China. Affected companies have been included in the list, and organizations under US jurisdiction cannot share technology with companies on the list unless they have been made public. Recently, due toHuaweiThe incident, the US government's actions have received widespread attention, and Huawei has been one of the main players in CVPR. The IEEE has recently carefully announced these restrictions and has established rules to prevent their organizations and companies on the list from sharing papers unless they have been published. This behavior has affected the process of peer review and has caused confusion and incomprehension to people inside and outside our community.

PAMI TC and CVPR have always believed that our meeting is open to all students who wish to submit their research and other participants, and we welcome all our colleagues. The IEEE statement will only affect whether the company's papers on the list are accepted, and our participants will not be affected. We firmly believe that the program chair, the regional chair and the editors of our magazines should be able to choose whether or not to participate in the review according to their wishes, and we will continue to firmly support this idea.

IEEE positions itself as "science andeducationAnd directly to the organization of electrical and electronic engineering, communications, computer engineering, computer science theory and principle research, and the art and science of related engineering branches." In order to achieve this goal, IEEE is responsible for many scientific journals and conference organizers. Role. In addition, it is a wide range of industry standard developers. The IEEE has developed 30% of the world's electronics and electrical and computer science, more than 900 current industry standards, and initiated/cooperated more than 300 international technical conferences each year. It plays an important role in the industry.

The International Conference on Computer Vision and Pattern Recognition (CVPR) is the IEEE's annual academic conference. The main content of the conference is computer vision and pattern recognition technology. This year, CVPR 2019 received a total of 5,165 papers, and finally received 1,300 papers, with a acceptance rate of 25.2%.

Not long ago, an internal mail sent by IEEE to members was circulated. The mail said that due to the US government ban, Huawei employees were forbidden to serve as reviewers or editors but kept Huawei employees in the editorial board until Huawei lifted the ban. The IEEE decision has triggered protests from many Chinese scholars. Professors such as Zhang Haixia from Peking University and Liu Yiqun from Tsinghua University have publicly expressed their views, withdrawing from the editorial board of the IEEE journal and not contributing to the IEEE series.

This year, CVPR 2019 will be held in Long Beach, USA from June 12th to 20th. Although the official statement of CVPR has been well received by the academic circle, many participants have indicated that a large number of Chinese scholar visas have been blocked at this year's CVPR meeting.

Science has no borders, but with the escalation of the Sino-US trade war, many bans by the US government have caused serious turmoil in the academic world, and the result is undoubtedly both losses. In the future, will there be more academic organizations, companies and institutions to stand up and let us wait and see.

Alibaba Cloud - Up to 1888 yuan universal vouchers are immediately available

Related news
IEEE's AI Summit CVPR is quite Huawei: a number of co-chairs co-branded to support free review
CVPR is quite Huawei's multiple presidents joint statement IEEE's regulations do not affect CVPR participants
CVPR 2019 | Interpretation of 7 Selected Papers from Microsoft Research Asia
Video PS artifact! The character stealth and watermark removal, this research on CVPR has just been open sourced.
Hot news this week
A small plane in the US has crashed into a 30-metre high voltage power line and got stuck: 80,000 people affected
Can recording others' wechat chat records be used as evidence? The Beijing Internet Court has an answer
Alibaba launched a new cross-border e-commerce platform in Spain, aiming to operate independently in the middle and high-end market
It's not just Huawei! Beidou has penetrated more than 20 industries and applied more than 15.5 million products
When pure water is used in China team to solve the problem of seawater hydrogen production: it is expected to become an original industry
A Tesla crashed into two cars in Taizhou, Zhejiang province, killing two and injuring one, police said
Breaking the spell of "Android 3 year must card", the new Breguet mobile phone will be sold for the first time tomorrow: from RMB3499
The appearance of Xiaomi's mini console is revealed for the first time: an all-metal body with a strong apple smell
Be careful with your phone for a long time! The aunt played with her mobile phone so much that her fingers got stuck
Google's Project Zero team accuses vendors of slacking after ARM GPU bug exposes Android upgrade woes
The most popular news this week
Why is the Apple Pencil 2 not supported? iFixit takes apart the iPad 10 to find out
Zte's experience proves that there is no way out of appeasement and peace can only be fought out
China's growing presence in the global high-tech sector is unacceptable to the US
Us to investigate Lapsus$hack, Microsoft, Nvidia and others were breached
From January to October this year, the number of global travel app downloads approached 2 billion, with China's Amap, Baidu Map and Railway 12306 taking the top three places
With the acquisition of Pulse, Mozilla will develop a new approach to machine learning
Did the United States achieve its goal? More than 40 suppliers went to the United States with TSMC
Microsoft may not be able to offer its Microsoft 365 service in German schools after two years of efforts failed
A record $50 million in compensation! In the final judgment of the dispute over the infringement of Minecraft by Mini-World, NetEase won the lawsuit
Manufacturers like Samsung and Xiaomi have been affected. Google has revealed a dangerous flaw that threatens millions of Android devices