Image of the International Space Station from NASA

As soon as next year, ordinary people will be able to choose a new tourism project: a trip to the International Space Station, provided they can afford tens of millions of dollars in travel expenses.

The National Aeronautics and Space Administration (NASA), which is dedicated to scientific research, is committed to seeking commercial profits. NASA announced on Friday, 7 U.S. Eastern Time that it plans to open the International Space Station to the public and private enterprises. It will allow up to 30 days of private astronauts to go to space station projects, such as commercial and promotional activities related to NASA projects, or manufacturing, production and development activities in special microgravity environments. 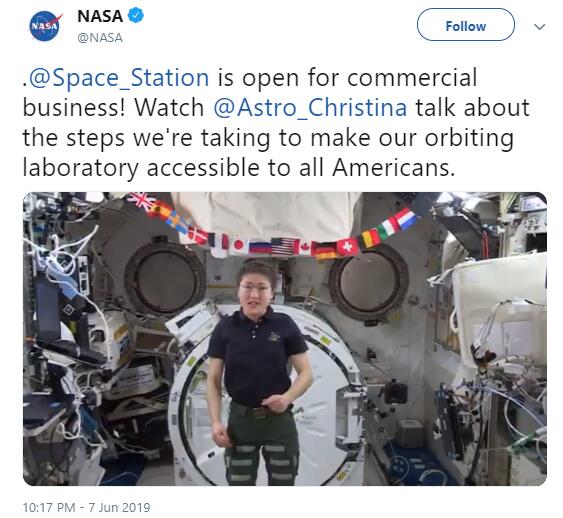 NASA expects the first ISS open project to be launched as early as next year. Up to twice a year, private astronauts roam the space station. Visitors will travel to the space station in an American spaceship. Specific tourists are arranged by two companies, Space X, which are owned by Boeing and Musk. They will select tourists to ensure that astronauts meet the medical and training requirements for space flight.

In terms of transportation, SpaceX will use its own Dragon spacecraft, and Boeing will build a spacecraft called Starliner. They may charge each astronaut a "fare". According to ABC, Jeff DeWit, NASA's chief financial officer, predicted at a press conference on Friday that he would charge about $50 million per person.

However, in 2001, NASA set a precedent by sending Dennis Tito, a California businessman, to the space station. Tito spent about $20 million on this space trip.

After Trump took office, the U.S. government restarted its ambitious space program, adding $1.6 billion to NASA's budget. U.S. Vice President Burns said in March that Trump had ordered American astronauts to land on the moon within five years. Burns said the next man and the first woman to land on the moon should be Americans.

But the media and some experts are not optimistic about Trump's five-year moon landing plan.

According to the Washington Post, returning to the Moon in five years is a bold and formidable challenge that will push NASA to its limit. According to the New York Times, Burns said NASA needed to take more urgent measures to "return to the moon". But in the NASA budget submitted to Congress by the Trump Administration, the growth rate of funding is not obvious, which makes NASA face many doubts about how to achieve this ambition.

Agence France-Presse said the repeated delays in the development of a new heavy rocket, the Space Launch System (SLS), for the U.S. mission to the moon were frustrating. SLS's first unmanned launch test has been postponed beyond 2020.

In his speech in March, Burns criticized "bureaucratic inertia" and "paralysis of analysis" for delaying SLS and called on NASA to foster "new thinking". Boeing, which is involved in SLS development, has also been criticized. Burns threatened that if NASA was not ready in time, the government would use commercial launch systems or seek other partners.

In March, Pang Zhihao, a Chinese aerospace expert, told the Global Times: "I don't think it's reliable for the United States to return to the moon in five years." He mentioned that the United States has not launched a heavy launch vehicle in recent years, and the Falcon Heavy launched by SpaceX last year can only be called a "quasi-heavy" launch vehicle. In the Apollo era, Saturn 5 had a near-Earth orbit carrying capacity of more than 100 tons, while Falcon Heavy had a capacity of more than 60 tons.

This did not affect Trump's expectations for space projects. On May 13, NASA Director Jim Bridenstine announced that the Greek goddess, Apollo's sister Artemis, had been chosen as the code name for the U.S. lunar landing program in 2024. "We're going back to the moon and then to Mars," Trump thrilled.

On Friday, the day NASA announced its mission to the civilian open space station, Trump tweeted that we had invested so much money that NASA should not only talk about going to the moon. We did it fifty years ago. They should focus on bigger things, including Mars (the moon is only part of it), national defense and science.

Unfortunately, the most praised comment under Trump's post corrects him: the moon is a satellite of our planet, not a part of Mars, you big fool. 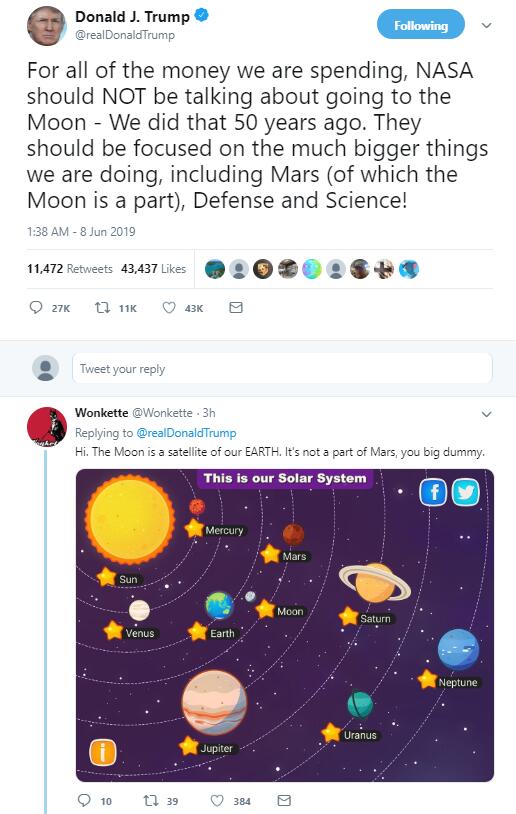 Related news
NASA's first trip to the International Space Station can take the SpaceX "special train"
NASA chooses Axiom Space to provide the ISS's commercial residence module module
SpaceX's first, NASA's last
Hot news this week
The developer of the dating app Tinder has reached an agreement with Google over billing rules for its app store
Still did it! Canada has banned Huawei and ZTE from participating in the country's 5G network on "national security" grounds
Red Elf Lightning erupts in the Himalayas Spectacular Spectacle: Experts Reveal What Exactly Is This?
The founder of the Internet Quick Hand Su Hua was taken away for investigation, and the fast hand responded: the news was not true
Wang Xiang, president of Xiaomi, explained that a shortage of low-end chips is a major challenge in overseas markets
Or for Studio Display Pro, the release of Apple's 27-inch Mini LED-backlit Display has been delayed by October
Tencent Q1: The business service business has "slightly decreased" year -on -year, and resource centralized video cloud and network security | View financial report
One picture to understand! Blue Factory has issued 3 new machines in a row: self-developed chip blessing, the narrowest lower border
Sony released the active noise-canceling headphones WH-1000XM5, equipped with 2 chips and 8 microphones
Tencent established a smart technology company in Chengdu, and its business scope includes Internet data services
The most popular news this week
How does the Internet make People Copy each other
Fed Vice Chairman: The future digital dollar may complement the coexistence of stablecoins and commercial bank currencies
ZHANG Pingan, CEO of HUAWEI CLOUD: The value of data governance in China has not been fully tapped Data and AI should be accelerated
Shenzhen Atmosphere! The sales price of mobile phones, computers and other products is subsidized by 15%
Microsoft shows third -party components: Win11 chicken rib function is saved
No need to grab it! Sony announced an increase in PS5 shipments
Audi advertising poster photos only sell for 8 yuan? Photographers question the unreasonable use of the photo purchase
Twitter spent $150 million to settle privacy and security lawsuits with the U.S. government
Hong Kong Hang Seng Index Opens 0.5% Baidu Hong Kong Stocks Open More Than 2%
Amazon's new CEO participated in a shareholders' meeting for the first time: to restore normal profit, ready to cut off the excess warehouse