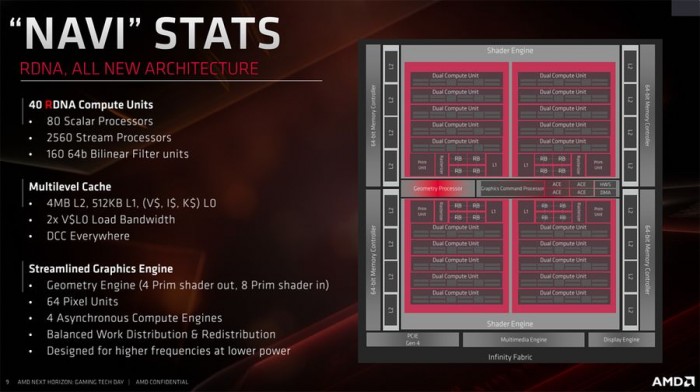 Before 2000, the core of the R100 was the first generation architecture of the A card. Whether it was designed with fixed units, 3D geometry conversion and lighting effects now look very primitive.

The 2001-2007 R200-R500 is the second generation architecture. Simple VS texture shader and PS pixel shader are designed separately, but the different proportion is different. The whole rendering pipeline is like a single-channel one-way street.

The third generation TeraScale architecture (representing core R600) of 2008-2011 has achieved a leap. VS and PS are integrated into a unified shader, which is what we often call a stream processor, supporting VLIW (super-long instruction word), and then the GCN architecture (representing core Southern Islands) of 2011-2019. The unified shader plus independent scalar and vector units, the ratio of which is 1:4. 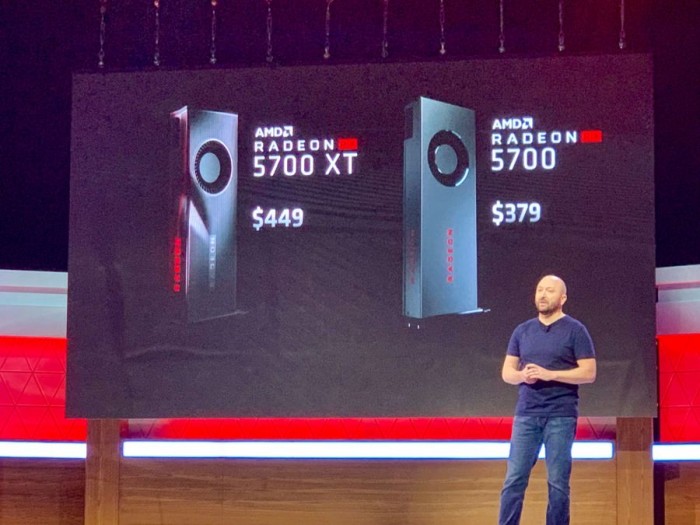 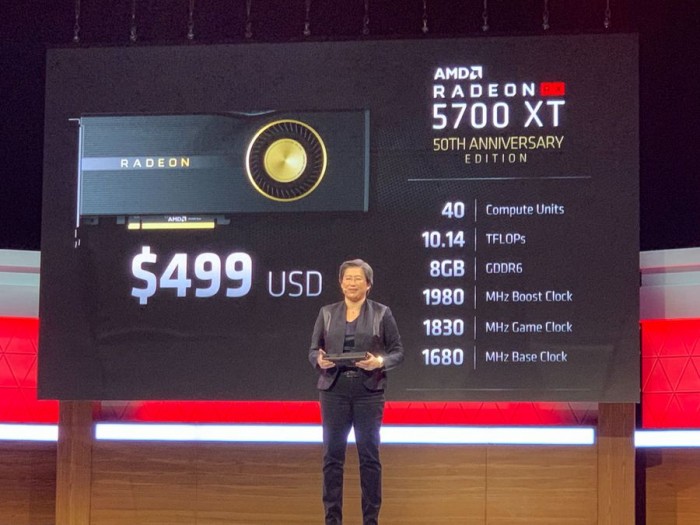 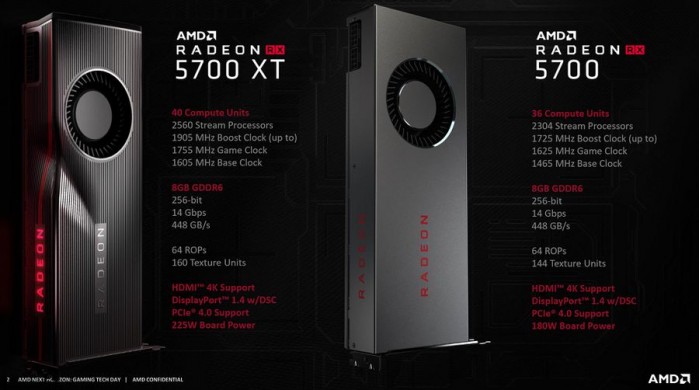 It should be emphasized that,RDNA is an all-round redesigned architecture, not another upgrade of GCN, nor a hybrid of GCN and RDNA.However, with the integration of GCN architecture instructions to maintain downward compatibility, existing technologies can still be supported on RDNA architecture.

RDNA architecture will be the cornerstone of AMD GPU graphics cards for many years to come.Next we'll see the second generation version of RDNA 2 using the 7nm processLook at the road map. We are expected to meet early next year.

In addition to the new architecture of RDNA, the Navi core has many new features such as 7Nm technology, GDDR6 memory, PCIe 4.0 bus, Radeon media engine, Radeon display engine and so on.

Although transistors are smaller and smaller,Compared with Vega 64, the performance of Navi 10 core improves by 14%, while power consumption decreases by 23% and energy efficiency ratio increases by 50%.

In terms of pure architecture performance, Navi improves up to 50% compared with Vega under the same power consumption and configuration, which contributes about 60% to the actual product performance improvement. In addition, about 25% comes from the support of 7Nm new process, and about 15% comes from the improvement of frequency and power consumption.

According to AMD, there are four main design concepts of RDNA architecture.In terms of performance, it is necessary to satisfy the demand of modern game load, optimize the power consumption and bandwidth utilization in terms of energy efficiency, strengthen the ecology in terms of function, and eat everything from mobile to desktop to cloud in terms of scalability.

In order to achieve the above goals, RDNA architecture has been transformed from three main aspects, including CU computing unit, cache and pipeline. Next, we will share with you one by one. However, due to the strong technical nature of GPU architecture, we just have a rough look at it, and finally, AMD's planning on ray tracing.

The new cell design is divided into 40 groups, each with 2 scalar processors, 64 stream processors and 4 64-bit bilinear filtering units, totaling 80, 2560 and 160 units.With lower execution delay, stronger single thread performance and higher cache efficiency, the overall computing energy efficiency has been greatly improved compared with GCN architecture, and can be adapted to all kinds of loads from games to computing.

The whole graphics engine has been readjusted to be smoother and more efficient, including geometry engine, 64 texture units, and 4 asynchronous computing engines (ACE). The load distribution is more balanced, and higher frequency and energy efficiency can be achieved with lower power consumption.

In terms of CU computing units,Although it seems that there are 64 stream processors in each group, the number remains unchanged, but this number is the most balanced combination of AMD's repeated design and processing resources. At the same time, the structure of the whole computing unit has been thoroughly restructured, which is totally different from the GCN era. 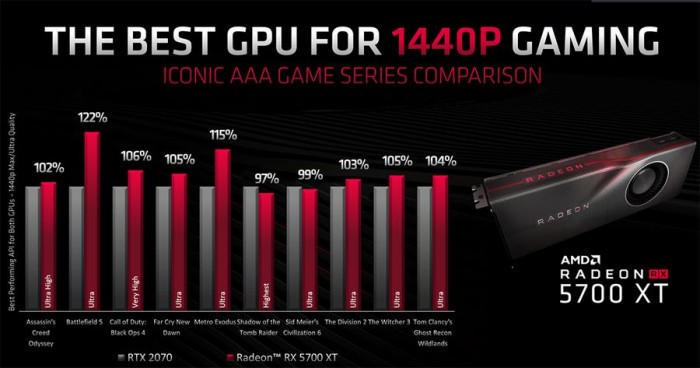 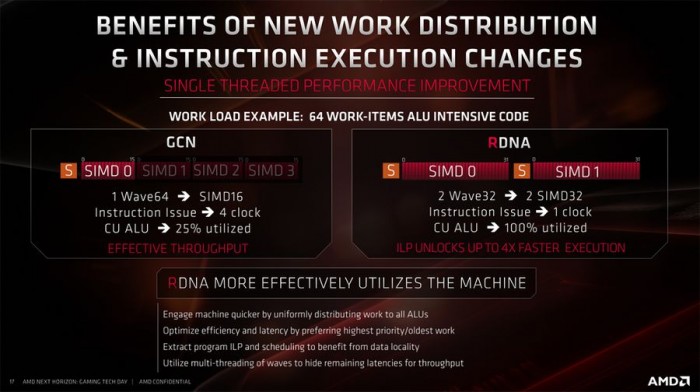 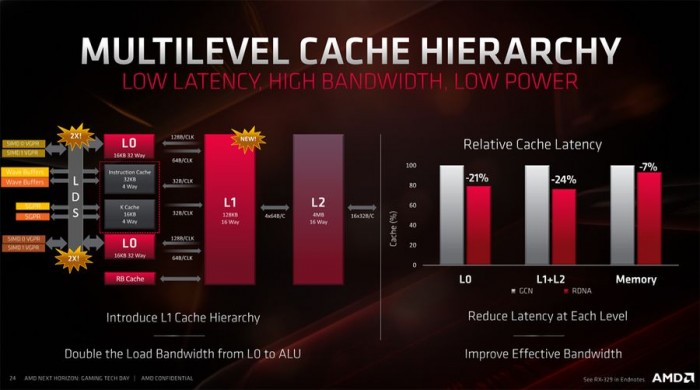 In addition, in order to enhance the efficiency of resource scheduling and utilization,The RDNA architecture also tightly bundles two CU computing units together to form a Work Group Processor, doubling the number of available ALU units and registers and quadrupling the cache bandwidth.

In terms of cache, RDNA architecture designs a multi-level coherence structure. Each dual-CU combination has its own zero-level cache. It doubles the load bandwidth of ALU cells, adds four new first-level buffers (all 16-way 128KB), reduces the congestion of secondary buffers (16-way 4MB), and greatly reduces the overall latency and power consumption.

According to AMD, zero-level cache latency is reduced by 21%, primary and secondary caches by 24%, and memory latency by 7%.

In addition, under the consistency multi-level cache, it is supported everywhere.Delta Data Compression(The yellow arrow in DCC/figure) improves the transmission rate, and also improves the color compression algorithm, which can be read by the display engine, and the shader can also read and write the compressed color data at the same time.

Asynchronous computing has always been the unique skill of A card and the key to better performance under DX12 and Vulkan API. Now it has been enhanced, it can control other modules more accurately in real time. 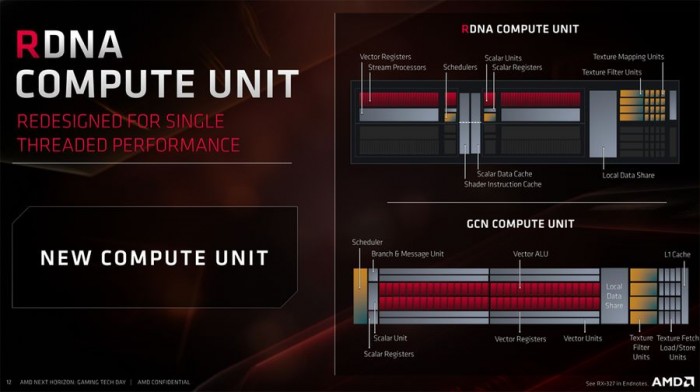 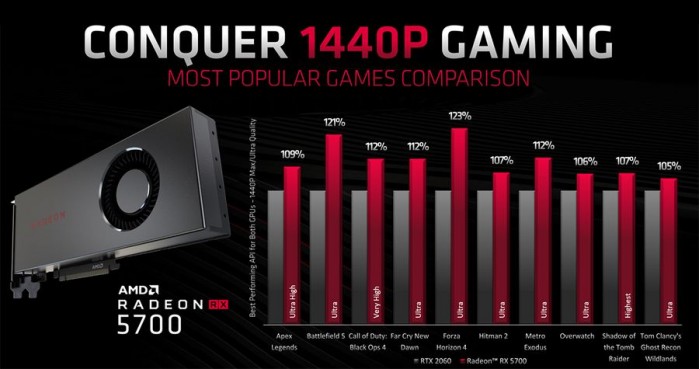 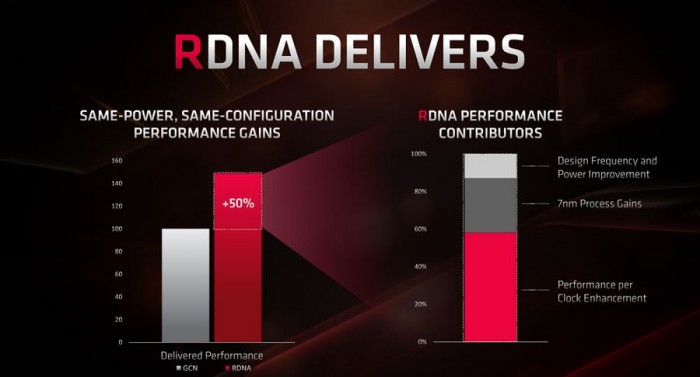 Radeon Display Engine has also made a big leap forward in supportFreeSync 2 HDR, HDMI 2.0/DisplayPort 1.4 HDRFor high resolution HR display optimization, output4K/240Hz, 8K/60HzAnd it can be achieved with only one data line, and VR header display is optimized.

For ray tracing support, GCN and RDNA architectures do not have dedicated hardware units to accelerate, but in fact, AMD ProRender and Radeon Rays have long supported ray tracing, content-oriented rendering and game development respectively.

In the next generation RDNA architecture, AMD will support the real-time rendering of specific ray tracing effects in the game through hardware units. Even in the more distant future, AMD will not throw all ray tracing to hardware for local processing, otherwise the efficiency will be very low. Instead, it will use cloud computing to achieve the whole scene ray tracing, ensuring the effect of the picture at the same time, will not. Too much pressure on local hardware. 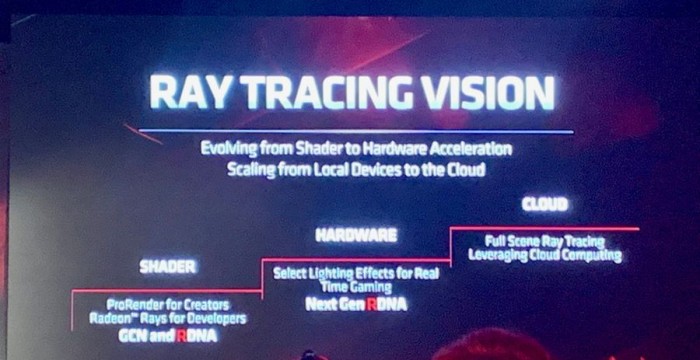 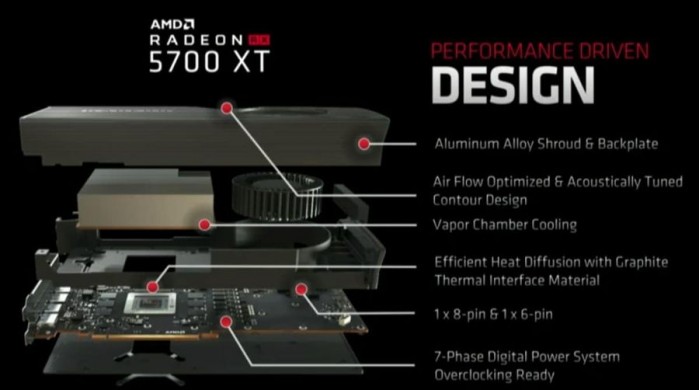 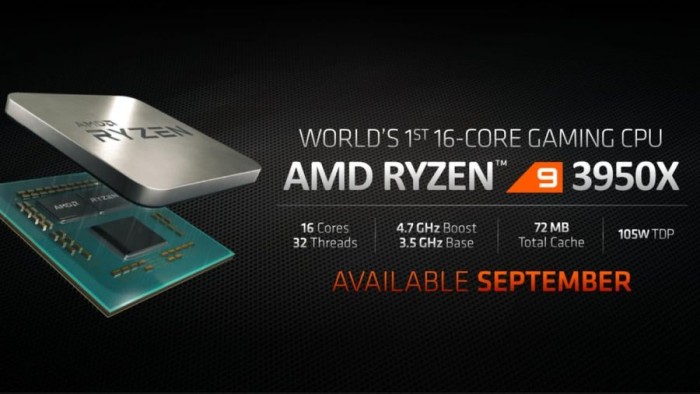 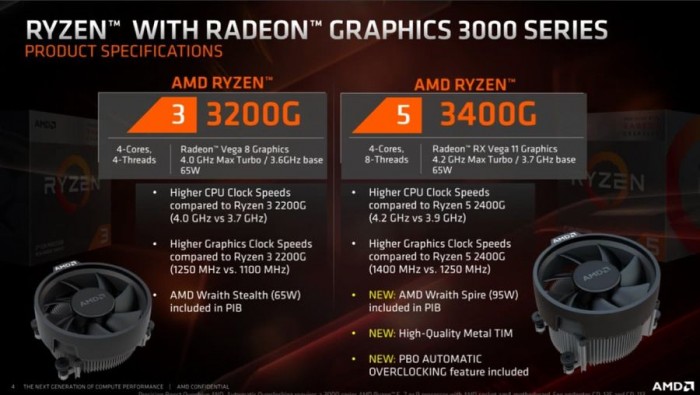 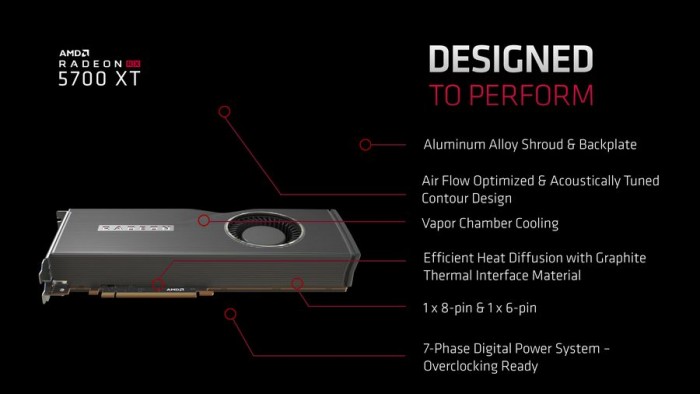 Related news
AMD Navi is based on RDNA/GCN hybrid architecture: 2070 60% area, higher performance
Exploration of AMD RDNA's New GPU Architecture: Three-pronged Approach
AMD Announces RDNA Architecture White Paper (with PDF download)
What's good about the 7Nm rDNA graphics card? AMD: our performance and price are better than our friends
Amd secretly transferred Zen architecture team to optimize GPU frequency: rDNA generation 2 graphics card increased by more than 60%
Amd rDNA 2 architecture has three cores: ray tracing is only high-end
AMD will return to the notebook video card market next year, with at least three rDNA 2 Mobile GPUs ready
Amd may launch rDNA framework special mine card against NVIDIA
Hot news this week
Is Hongmeng OS Android shell? HUAWEI Wang Chenglu: Tucao people do not make complaints about what is open source.
Netizens said that the ps5 host has been cracked: it is able to mine and calculate the power of super high-end graphics card
Tencent publishes the title party recognition patent for the first time: Based on Artificial Intelligence
I'm hiking in the tropical rain forest of China with apple watch, but my sports record is the last thing I care about
Xiaomi's new patent exposure: four shots are distributed in the four corners of the mobile phone, which can realize 3D photography
The internal test of flyme 9 of Meizu 16 series was launched at the end of April: design, privacy and function upgrade
Ma Yun bought the invention of scanning code to pay several 80s will ring the bell: an estimated value of 54 billion
Three years in vain! Sun, a programmer, compensated Tencent 976000 yuan and returned 158000 yuan for violating the competition agreement
Tencent document online mind map and flow chart, using structured thinking to achieve information management
This year's first big West Mercury show will be held on the 6th! Feel the true face of the smallest planet in the solar system
The most popular news this week
Samsung has registered "Galaxy Z" trademark
Huawei's cheapest real wireless noise reduction headset freebuses 4I first sale today: 449 yuan
The report said that Russian intelligence forged news websites to spread the wrong information about the new vaccine
From March 1, will wechat start charging for good morning and good morning pictures? Official response
Do you charge for sending such pictures on wechat? Here comes the official response
150 people have been cut in two years! Google understands how much it costs to play games
Huawei's P50 release time is suspended at the end of April: new tablet comes on stage simultaneously
Linux kernel 5.11.4 release adds support for some mainstream hardware
Samsung releases 2021 49 inch G9 super curved display: upgrade Mini LED screen, double brightness to 2000 nits
Sony drift to PC?