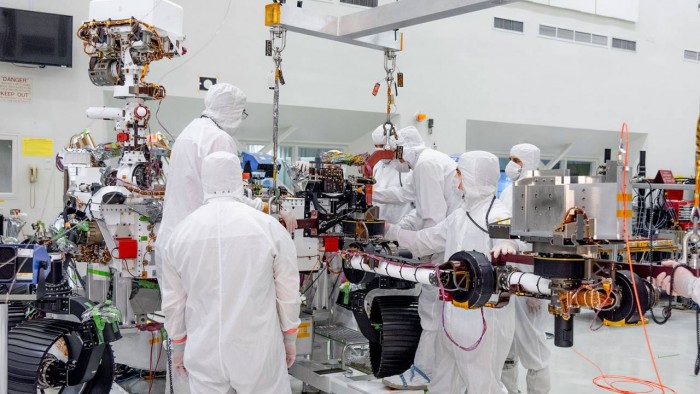 The NASA team last week installed custom-milled aluminum wheels for the rover, each with a diameter of 21 inches. Also installed in a series of complex pivot points and pillars. They allow the Mars 2020 Mars to spin in place, maintaining traction as it passes through the soft sands of Mars and harder rocky terrain.

The Mars 2020 probe will also conduct scientific experiments and collect samples, and NASA hopes to bring these samples back to Earth. The key is the main mechanical arm. In fact, given its size and articulated joints, it is more similar to the elephant trunk. 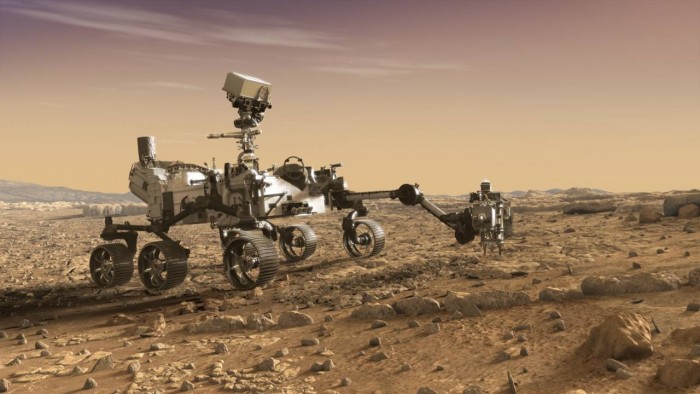 This is a different set of tools, including scientific cameras, mineral and chemical analyzers, and drill bits. With it, the Mars 2020 detector can identify interesting points from which samples can be collected. Also included is a series of interchangeable 1-inch drill bits, so the detector can collect rock samples with a diameter of 0.5 inches for testing.

The Mars 2020 Rover team at the Jet Propulsion Laboratory said that the "turret" would not be installed on the robot until a few weeks later. The detector is expected to be launched from July 2020 at Cape Canaveral Air Force Base, Florida.

Related news
NASA scientists equip the Mars 2020 Mars with an impressive robotic arm
NASA begins to fuel the nuclear power plant of the Mars 2020 Mars
What is the Mars 2020 Mars Rover? Go to the NASA assembly room and have a look.
NASA Engineers Install Sample Cache System on Mars 2020
NASA completes separation of Mars 2020 landing platform
NASA Mars 2020 probe completes the first "stand up"
NASA's'Moon to Mars'project may face huge changes
NASA plans to collect Martian soil samples and bring them back to earth through the Mars 2020 mission
NASA showcases a new generation of supercam cameras to be used in Mars 2020
Hot news this week
Yao Ting, a "gifted girl" who won Huawei's 1.56 million yuan annual salary, responded: what does salary not mean
Qualcomm lobbied the US government to lift the ban on the sale of components to China
Tencent re racing e-commerce, but does not want to make the next pinduoduo
Tencent's response to wechat ban issued by the United States: under evaluation
Xiaomi 10 supreme commemorative edition press conference Lei Jun's live rehearsal
Wechat in Apple's Google App store may be banned. What if wechat can't be used on iPhone
Ali 88vip bought value: you can get Netease cloud music black glue annual card for free
Tencent launched the largest school recruitment in history, and these positions are most popular
The United States blocked tiktok and wechat one after another: This is the real purpose!
Votebymail is dedicated to helping American voters easily apply for postal ballots
The most popular news this week
Microsoft returns to mobile phone market! Price exposure of surface Duo: from 9700 yuan
Xbox series X has decided to postpone its launch in November to next year
Facebook profit is expected to be affected by iOS 14 advertising tracking restrictions
Internal employees leak important OLED screen technology to Chinese Enterprises: Samsung lost millions of dollars
Residents in nearly 30 states of the United States have received a mysterious package from China: after being opened, it turned out to be plant seeds
The Supreme Court of New Jersey ruled that suspects could be forced to unlock passwords for smartphones
Google brings earthquake detection and early warning capabilities to Android devices
US $765 million loan suspended Kodak shares on "roller coaster"
Mozilla to lay off 250 jobs after covid-19 pandemic affects revenue
A new patent shows that Apple Watch antenna can be moved to improve signal quality