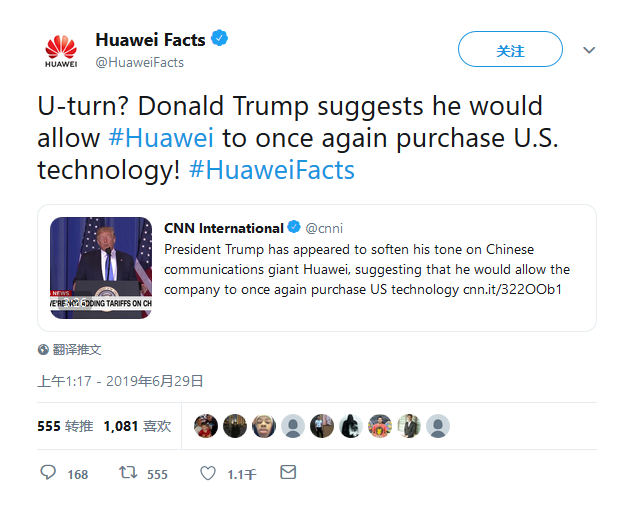 According to Voice of America, Trump said at a press conference held during the G20 Summit on the 29th that U.S. companies would like toHUAWEISelling a lot of products involves a lot of money, "I like American companies selling products to other people." He said U.S. companies were unhappy with the sales ban, and the government now allowed them to continue selling products to Huawei without endangering national security. But Trump refused to respond directly, despite repeated questions about whether Huawei would be removed from the U.S. Department of Commerce's "entity list" blacklist. He said that he did not want to talk about it at the moment and that the government would handle it with caution.

"Six weeks later, Trump's gesture was called a U-turn by Huawei," CNN said.televisionHuawei's official Twitter account responded the same day by saying, "U-turn? Trump said Huawei was allowed to buy American technology again! "Reported that the U.S. Department of Commerce in May issued a"physical list"ban against Huawei, but this is not the only policy obstacle Huawei faces in the United States. An executive order signed by Trump in May also prohibited American companies from buying or using Huawei telecommunications equipment.

U.S. technology companies such as Google have complied with an order issued last month banning U.S. companies from doing business with Huawei without special approval, the United Arab Emirates newspaper El Pais said Wednesday. But in the next week, the White House avoided the immediate implementation of these prohibitions and granted the company a three-month "probation" after the U.S. technology stock crash. Analysts said Trump's decision to allow U.S. companies to supply goods and services to Huawei would reduce the problems Huawei faces while ensuring a stable market for U.S. suppliers. "This is a relief for Huawei and American suppliers and will ensure smooth global trade," Bazac, vice president of Counterpoint, a Hong Kong-based research firm, told the newspaper. Another analyst, Bradis, said: "Let's see what happens. We have to watch. It is not clear whether Huawei will be completely removed from the list of entities.

"Huawei is one of the few effective leverages that we can leverage China's fair trade," Senate Democratic Leader Schumer tweeted Tuesday, according to a report on the website of the US Capitol Hill newspaper. If Trump retreats as he seems to be doing, it will greatly weaken our ability to change China's unfair trade practices. Republican Senator Rubio, who has always been anti-China, tweeted on 29 that if Trump really lifted the Huawei ban, "he would make a big mistake. We must legislate to restore these restrictions.

CNBC said that in an interview with Fox News on the 30th, President Kudrow of the White House National Economic Commission said that Trump's decision against Huawei was "not an amnesty" and Huawei would continue to be listed on the "entity list", but the U.S. Department of Commerce would issue licenses to more American companies to allow them to sell. More equipment to Huawei.

"The liberalization of Huawei's lifeline shows that Trump prefers to reach a business agreement rather than a cold war," Bloomberg said on Wednesday. Trump has sparked some hawkish anger in the US Congress in recent weeks because he hinted that he would abandon blacklisting Huawei to ensure a trade agreement with China. On Saturday in Osaka, he "took a big step" in that direction. "This shows that Trump is more concerned about selling American products to China than about starting the clash of civilizations advocated by his top advisers. In the long run, these business intuitions may explain more about the direction of Sino-US relations.

The U.S. government's stance on Huawei also seems to have an impact on other countries. The Wall Street Journal noted on the 30th that Trump did not mention his concerns about Huawei or other Chinese companies when he met with Korean entrepreneurs in Seoul on the same day. "This is a relief for many people in the room." Earlier, according to South Korean media reports, senior U.S. officials such as the U.S. ambassador to South Korea have repeatedly pressed South Korean enterprises not to cooperate with Huawei, which has led to a "dilemma" for South Korean enterprises.

New Zealand is also concerned about this trend. New Zealand Radio website said Wednesday that technical commentator Brisslen believed that Trump's latest statement was Huawei's "amnesty card", which would enable other countries, including New Zealand, to reconsider their position on the 5G issue in China. The New Zealand Government Communications Security Bureau (GCSB) has previously said that, based on current and future network security, New Zealand companies are required not to use 5G products, but the Department will now have to re-examine the issue. "If Americans no longer care, should New Zealand care about this issue?"

Related news
Trump said U.S. companies could continue to supply Huawei Huawei official push: U-turn?
16 GB Memory Windows HUAWEI Mate Book 13 Reel Dragon Edition Upgrade Time Limit in rush
Hot news this week
Tencent Music rose more than 3%, and its average monthly revenue of more than 10,000 musicians in 2021 doubled, and NFT will generate revenue for musicians
China Telecom and Huawei jointly released "Super Time Frequency Fold" 5G Determine Network wireless key technology
CNKI is a wholly foreign-owned enterprise? A-share listed company Tongfang shares responded in this way...
Apple has increased incentives in China to up to 15,000 yuan after cutting the trade-in price in the US
Washing your nose with salt Water may Prevent COVID-19, experts warn
"Tmall responds to over 300 minus 50" to the hot search, netizens: Don't engage in Olympiad, less routine more sincerity
Gree Electric has nothing to do with Gree Real Estate! Dong Mingzhu reiterated that he did not do finance and real estate
Xiang responded to Tesla's lawsuit by saying he was dissatisfied with tesla's arrogant attitude but not defamatory
Microsoft has launched an adaptive mouse for people with disabilities that can be assembled as many parts as they want
After the release of the 2999 yuan new machine, it instantly became the hottest model in the headlines: dominating the list all night
The most popular news this week
The domestic screens are rolled to the 2K screen. Why don't Apple follow the roll?
Experts remind: Do not put disinfection pieces to the sewer, it is useless and harmful to disinfection outdoor outdoor disinfection
Flying Pig's new "Yunyou Museum" can watch the live broadcast of nearly 20 museums in China
DEEPMIND training more than 600 tasks such as chatting, playing games, and accumulating wood
4K display uses 240Hz for the first time! Samsung's new flagship display is coming
Accidentally found a new track! AMD Rayon 7 6800U batch arrived
Better iPhone signal! Apple has released a new official version of iOS
iPhone security big overturn, built-in chip low-power operation, after shutdown can still be tracked location
Hong Kong stocks popular technology stocks rose sharply: JD.com rose more than 9% Ali rose more than 8%
Yu Minhong: Strive to open source while reducing costs quickly, or New Oriental will die