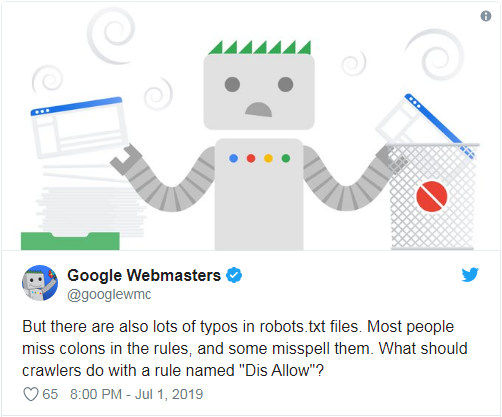 For example, Googlebot will scan a robots.txt file when indexing a website to determine which parts it should ignore. If the file is not included in the root directory, the search engine will index the entire site by default.

It is worth mentioning that this file can be used not only to provide a direct crawler index, but also to populate some keywords to achieve "search engine optimization" (SEO). In addition, not all crawlers will strictly follow the robots.txt file.

It should be noted, however, that even though REP has become the default implementation standard, it has never actually become a true Internet standard, as defined by the Internet Engineering Task Force (IETF - a non-profit open labeling organization).

In order to promote this change, Google is actively participating in the action. The search giant said that the current REP can be "interpreted" but does not always cover marginalized cases.

In addition, Google has proposed a more comprehensive "undefined scene." For example, how should a crawler handle a "scan for known content" task?serverA robots.txt file with an inaccessible failure, or a spelling error rule?

Google wrote in a blog post: "This is a very challenging issue for website owners. Because of the vague factual standards, it is difficult for them to write rules properly."

We want to help website owners and developers create amazing experiences on the Internet without worrying about how to limit crawling tools.

So Google worked with REP original author Martijn Koster, webmasters, and other search engines to submit a proposal to the IETF on how to apply REP on modern networks.

The company has not yet released the full picture of the draft, but it has provided some guidance. For example, any URI-based transport protocol can be applied to robots.txt. And it is no longer limited to HTTP, but also to FTP or CoAP.

It is reported that developers must parse at least the first 500 KB of robots.txt. Defining the size of the file ensures that each connection is not opened too long, reducing unnecessary server stress.

In addition, the new maximum cache time is set to 24 hours (or available cache command values), giving site owners the flexibility to update their robots.txt at any time, and the crawler does not overload the site.

For example, in the case of HTTP, the Cache-Control header can be used to determine the cache time. When a previously accessible robots.txt file becomes unavailable due to a server failure, the site is no longer retrieved for a significant period of time.

The point to note here is that the crawler can parse the instructions in the robots.txt file in different ways, which can lead to confusion for the site owner.

To this end, Google has specifically introduced the C++ library, which supports the parsing and matching system provided by Googlebot on GitHub for anyone to access.

According to the release notes on GitHub, Google wants developers to build their own parser to better reflect the parsing and matching of Google's robots.txt file.

Related news
Google open source robots.txt industry standard to lead search engine crawlers
Google open source robots.txt parser
Hot news this week
Alibaba: Shareholders SoftBank will settle in advance for advanced payment in advance involving a maximum of about 242 million ADR
Biden signed a chip and scientific bill, a video call of WeChat iOS internal test suspension window, the advanced CPU caused Win11 to be difficult to use, Huawei new machines enter...
Text message color, picture quality compression! Google calls out Apple for improving cross-device messaging
How to regulate the "broken card" operation to crack down on electrical fraud to prevent "accidental injuries" with cards?
Musk's eyes! Lei Jun released a full -size humanoid robot Xiaomi self -developed strength explosion table
Japan has confirmed that China has overtaken the US for the first time in the world's top three indicators of scientific papers
SoftBank Group announced the early settlement of up to 242 million forward contracts for ADRs in Alibaba, reducing its stake to 14.6 percent
iPad 10 will be absent from iPhone 14 conference: October appeared on Apple's last non -comprehensive tablet tablet!
Kuaishou TOB business Yu Bing: Self -developed chips or mass production after the end of the year, the video must be turned into light industry
The three major indexes of the US stocks opened sharply: ROBLOX fell more than 4%, Twitter and Tesla rose more than 3%
The most popular news this week
Fabless customers cut back on chip orders affecting Q4 capacity utilization
Washington's suspicion of TIKTOK exacerbated: How will the Bayeon government weigh it?
Pinduoduo launched its cross-border e-commerce platform in the United States in September
Put an SSD in your phone: from 2,499 yuan
China's largest general purpose drone! The first five flights were successful
IPhone 14 to be released alongside Huawei Mate 50: Which bangs do you choose?
Tencent's agent of the Russian war online game announced the suspension: Customs Customs in October
Will the heat this summer cause the winter to be extremely cold? Expert science
New Intel NUC Mini! First time with Core P 12 and a castrated version
Lenovo and Motorola are involved in the case! US ITC launched 337 surveys on mobile electronic devices