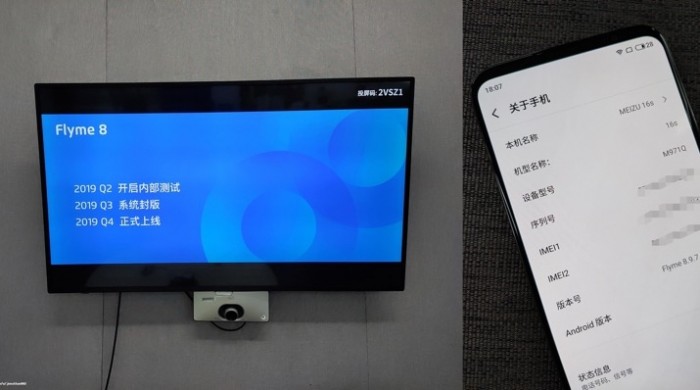 The last Flyme 6 was released on November 30, 2016, while Flyme 7 was released on April 22, 2018, with an interval of nearly one and a half years. If the above time points are followed,Meizu should have launched Flyme 8 project a year ago. Such a long research and development cycle also means that Flyme 8 will have great changes and system optimization.。

At the same time, we noticed that Flyme 8's sealing time was set at Q3 and its official release time was Q4. In other words, at least three months were spent in testing and repairing the vulnerabilities. This shows that Meizu attached great importance to Flyme 8, which also reflects that Flyme 8's update range will not be small.

In addition, the exposure of the picture also appeared in the Meizu 16S system settings of the "About"Mobile phone” Interface, version number displayed as Flyme 8.9.7.9 daily,Compared with Flyme 7, the interface of the new version has changed a lot. It can be seen that Flyme 8 greatly reduces the "dividing line", which means that the new version is expected to introduce the concept of "wireless" to reduce the impact of line on vision.

In fact, before that, Meizu Flyme Engineer Hong Hansheng exposed the return information of engineers on micro-blog, including BSP experts, performance tuning experts, the original author of small window mode, stability experts and so on. These engineers have done excellent functions and Optimization for Flyme system. I believe that with the return of these engineers, Flyme 8 system will be more worthy of improvement.

Related news
Meizu Flyme 8 Exposures: Q4 released this year
Meizu Flyme 8 UI interface first exposure: icon regression quasi-physical design
Meizu Flyme 8 poster exposure: suspected release on August 13
7 key points of Intel Q4 revenue easily exceeding expectations
Tesla 2019q4 financial report: not enough money to go to Mars
Xunlei Q4 financial report: sharing computing into the main power blockchain to open up the future market
Smart watch is coming, Meizu apply for Meizu watch and flyme for watch
Amizu watches are expected to be released this year and are applying for a Flyme For WATCH" trademark
Memory prices fell rapidly in August, and experts said the contract price would fall in Q4
SA: Global smartphone wholesale revenue in Q4 2021 increased by 6% year-on-year
Hot news this week
With the NIL technology, Canon wants to provide China with a lithography machine comparable to the EUV
Genius hacker Geohot promised Musk 12 weeks to fix Twitter search, but posted for help because he wouldn't react
Google's parent company is planning to cut tens of thousands of jobs
The Long March 9 is basically confirmed: the low-orbit carrying capacity of 150 tons can carry the entire space station into space
A small plane in the US has crashed into a 30-metre high voltage power line and got stuck: 80,000 people affected
Can recording others' wechat chat records be used as evidence? The Beijing Internet Court has an answer
Alibaba launched a new cross-border e-commerce platform in Spain, aiming to operate independently in the middle and high-end market
Google is concerned that Microsoft's acquisition of Activision Blizzard will affect the ChromeOS experience
The second generation Snapdragon 8 flagship! Mi 13 toughened film appeared: four sides and other narrow screen accounted for a stable ratio
A Tesla crashed into two cars in Taizhou, Zhejiang province, killing two and injuring one, police said
The most popular news this week
The most controversial generation of Windows: Vista turns 16!
Apple lost $56.1 billion on Black Friday! Production of the iPhone 14 is expected to drop by nearly 10 million units
Chinese storage stands up: SSD forced overtaking! World giants like Samsung lag behind
QQ membership via SMS has become a thing of the past: Tencent officials said the relevant business functions have been offline
Two men ransacked an Apple store and made off with more than 200,000 products: a textbook move by the employees
South Korea 2-1 Portugal repeat Asian miracle: Lei Jun with Xiaomi 13 thumbs up
The standard version is unbeatable and sells for 3,999 yuan for Mi fans
Two new Huawei devices are ready to launch: one is more creative
For the first time ever! NVIDIA graphics card to play the game flash screen must refresh the BIOS
Samsung Galaxy Z Flip5 exposure: Larger screen, fewer creases