The latest research from Canalys’ Cloud Channels Analysis service shows that the total spend on cloud infrastructure services in China reached US$2.1 billion for the first time in Q1 2019. China accounted for 9.2% of the worldwide total, making it the second largest market behind The US at 48.4%.

Amazon Web Services (AWS), Microsoft Azure and Google Cloud dominate globally but this is not the case in China. Government initiatives and regulations mean cloud service providers headquartered in China account for four of the top five. Alibaba Cloud led in Q1 with 47.3% Of the market, followed by Tencent Cloud with 15.4%. AWS was third, accounting for 8.8%, closely followed by Baidu Cloud (8.0%) and China Telecom (6.8%).

Amazon Cloud Services (AWS), Microsoft Azure, and Google Cloud dominate the world, but not in China. Government push and industry policies help China-based cloud service providers to take up four of the top five. Alibaba Cloud topped the list in the first quarter with a market share of 47.3%. Next is Tencent Cloud, with a market share of 15.4%. AWS ranks third, accounting for 8.8%. Followed by Baidu Cloud (8.0%) and China Telecom (6.8%). 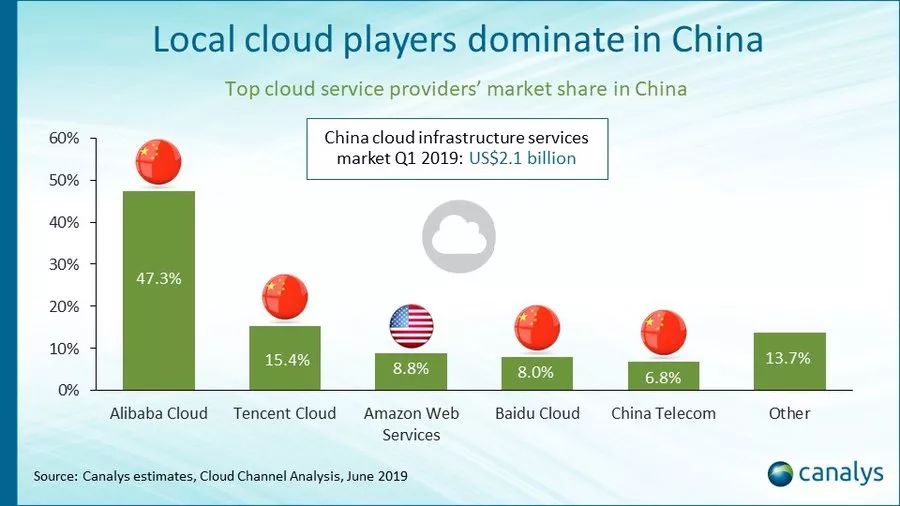 China's investment in cloud infrastructure services has benefited from China's largest Internet and smartphone subscriber base, which has greatly boosted the use of digital consumer services. Liu Chang, a research analyst at Canalys, said: “In the past decade, Chinese start-ups have grown rapidly and developed into global companies. They focus on delivering innovative digital online services in the video, gaming, e-commerce, social media and digital finance sectors.

<;Alibaba is the leading ecommerce platform in the country, while Tencent leads in social media with WeChat, and Baidu is the leader in online search, all underpinned by cloud computing. This has driven significant investment in distributed data centers across the country to support Incremental customer demand and the launch of new services, and to maintain high levels of availability.”

“Alibaba is China's leading e-commerce platform. Tencent is leading the social media field with WeChat. Baidu is a leader in online search, all of which are based on cloud computing. This has driven their massive investments in distributed data centers across the country to support their growing customer demand and new business launches while maintaining high availability of services. ”

Government organizations have been active cloud adopters, valuing it as a core component to support data-intensive projects, such as secure and smart cities and egovernment services. “The combination of cybersecurity policies and requirements for data localization, as well as the China Telecommunications Regulation, have helped to accelerate the growth of home-grown cloud service providers." added Liu. “The current trade issues between China and the US will amplify this further.

Government agencies have been actively adopting cloud technology as a core element in supporting data-intensive businesses such as security and smart cities, as well as e-government services. “The combination of cybersecurity policies and data localization requirements, as well as the China Telecom Regulations, can help accelerate the growth of local cloud service providers. & rdquo; Liu Chang added. “The current trade problems between China and the United States will further exacerbate this situation.

Internationally, the Chinese providers continue to expand, especially in Southeast Asia, the Middle East and parts of Europe. If the US-China relationship worsens, countries around the world will not only be forced to decide between Chinese or non-Chinese infrastructure for 5G Networks, but also for the roll-out of cloud infrastructure services.”

Internationally, Chinese cloud service providers are continuing to expand, especially in Southeast Asia, the Middle East and parts of Europe. If Sino-US relations deteriorate further, countries around the world will not only be forced to decide whether 5G network services will use Chinese or non-Chinese technology equipment, but also face the same choice in deploying cloud infrastructure services. ”

Related news
Huawei Q1 smartphone shipments skyrocketed by 50% to become the world's first stable?
Q1 global cloud infrastructure market share in 2019: AWS 33%, Microsoft 16%, Google 8%, IBM 6%, Aliyun 5%, Tencent 2%.
2019 Q1 China's public cloud market share: Alibaba Cloud 47.3% lead
Tencent Q1's net profit of 108.1 billion yuan was 29.4 billion yuan, a year-on-year increase of 6%
After Tencent's Q1 financial report, the market value of Tencent hit a new high
Baidu released Q1 financial report: revenue of 22.5 billion yuan exceeded expectations
India mobile Q1 shipments out! Domestic mobile phone dominates Samsung's list
Synergy Research released 2020Q1 China public cloud market report Baidu Intelligent Cloud stable third
Global smartphone shipments fell 11% year-on-year to 314 million units in Q1, according to the data
Hot news this week
China has found 35 known cases of the new zoonotic virus Langya
Losses in a single quarter of $ 23.4 billion a record, SoftBank did not carry the plunge of technology stocks and the devaluation of the yen
The prevention and control of the American Monkey epidemic has failed. What should I pay attention to?
Kuaishou launched a self-developed cloud intelligent video processing chip: The chip has been streamed successfully
The new product of Xiaomi MIX is coming: both internal and external dual -screen has been upgraded to make up for the previous generation.
Ministry of Public Security: Single telecommunications network fraud continues to cause 40 % of all electrical fraud cases
A new zoonotic virus, Langya, found in China has not yet been confirmed to be transmitted from person to person
A tech company in Shanghai has been fined 220,000 yuan for swiping orders to improve its ranking on Yelp
Special price "kill ripe"? Bike-sharing platforms have different prices for the same package for different users
Alibaba: Shareholders SoftBank will settle in advance for advanced payment in advance involving a maximum of about 242 million ADR
The most popular news this week
Apple's new iPad does not support 3.5mm headphone hole, Baidu map big update, anchor adopted two protected plants were checked, Rui Dragon 7000 series price stolen, these are the o...
A proposed ban on Internet addiction in California has failed
Industrial star attraction strategy to cope with the American semiconductor strangulation strategy
"Mother of the Chip" suffers! The United States blocked EDA to China: not so simple
8K Super Clear screen records Lingyue of China Space Station! Only 0.72 seconds
Sell to Tencent less than a year Sogou by the big purge: three major businesses are gone
After being suppressed by the United States, why did Ren Zhengfei thank you?
The fightback is coming! After ditching 34 Chinese suppliers, Apple was decisively rebuffed by two Chinese companies
Too sudden! The United States is clamping down again
Why is brain labor tired? Scientist: The brain can make poison