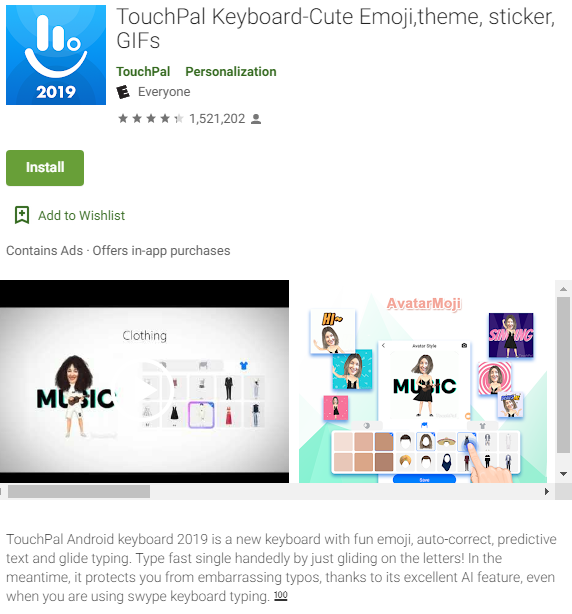 As a Shanghai-based company listed on the New York Stock Exchange, it has hundreds of Android applications in Play stores, including the popular Touc.HPAl input method.

By the time foreign media published, more than 60 Apps had been taken off the shelves of Google Play Store and were completely banned from using Google's lucrative advertising platform. A spokesman said that as the operation continued, more irregular applications would be cleaned up.

Google spokesman acceptedBuzzFeed News"Our Play developer policy strictly prohibits malicious or deceptive behavior, as well as destructive advertising," he said in an interview. Once the violation is found, our company will take action immediately.

As a developer with a market capitalization of $500 million and close ties with Baidu, an e-commerce giant, CooTek is the second largest Chinese application developer to be punished by Google this year.

In April, BuzzFeed reported that it was carrying out an advertising bombardment that violated Google's policies and that all subsequent applications from Do Global had been removed.

WhenMobile phoneIn the case of hibernation, lockout or other situations, unused CooTek can also trigger advertisements that seriously damage the user experience through the plug-in.

Lookout Security Intelligence Engineer Kristina Balaam revealed her findings in a blog post, saying that although advertisements outside App are nothing new, the plug-in can cause users to be bombarded to continue using mobile phones.

Because of the continuity and universality of advertising, even users report that they are unable to answer the phone or interact with other Apps.

In response, CooTek apologized and uploaded a new pure version of App that removed the ad plug-in. The Google App Store accepted this and confirmed its effectiveness and security.

However, evidence from BuzzFeed News and Lookout shows that at least 58 updated Apps still contain old and new code, which can help them achieve the same malicious advertising campaign.

In an interview with BuzzFeed News, Balaam said that although the BeiTaAds plug-in has disappeared, advertising still exists and 58 applications have added new features.

According to Lookout, CooTek updated its App again sometime in June and deleted the problematic code and functionality, but the damage was irreversible.

However, in several e-mail messages before the ban was issued, CooTek spokeswoman Mina Luo denied that the updated application involved malicious advertising activities and raised objections to Lookout's new analysis:

Luo said in a message that the company reiterated that it had not re-entered the advertising campaign in any updated version. Lookout's findings lack evidence and the logic is unconvincing.

But now, Google has confirmed Lookout's findings. Given that App development and monetization are the core business of CooTek, this may have a significant impact on the company's revenue outside China.

But inAppleOn AppStore, users can still continue to use CooTek's iOS application because the iOS version does not report any problems.

CooTek also opened a new office in Santa Clara, California, in March to renew its commitment to global markets.

Related news
App Store continues to outperform Google Play in consumer revenue
Continuous Violations of Advertising Bombing: Google Play Stores and Advertising Platforms Undercover App
The advertisement is divided into 10%, the internal purchase only draws 15%,Huawei launches the general attack to the Google Play.
China Cracks Down on Cosmetic Medicine Advertising
Breach of competition law? Google Play is under regulatory investigation in the Netherlands
Hot news this week
Kuaishou launched a self-developed cloud intelligent video processing chip: The chip has been streamed successfully
Ministry of Public Security: Single telecommunications network fraud continues to cause 40 % of all electrical fraud cases
Special price "kill ripe"? Bike-sharing platforms have different prices for the same package for different users
A tech company in Shanghai has been fined 220,000 yuan for swiping orders to improve its ranking on Yelp
Text message color, picture quality compression! Google calls out Apple for improving cross-device messaging
Alibaba: Shareholders SoftBank will settle in advance for advanced payment in advance involving a maximum of about 242 million ADR
It is also the collapse of the mine card: NVIDIA graphics card plummeted, AMD graphics card increases against the trend
Gaming phones also have optical shake protection: a 50-megapixel large-background master camera on the Rescuer Y70
Musk's eyes! Lei Jun released a full -size humanoid robot Xiaomi self -developed strength explosion table
Biden signed a chip and scientific bill, a video call of WeChat iOS internal test suspension window, the advanced CPU caused Win11 to be difficult to use, Huawei new machines enter...
The most popular news this week
Economic Daily: US Chip Act will not stop China Chip!
Because of violating consumer law, Google was fined about 288 million yuan
Global e-commerce revenues may shrink for the first time
Apple's M2 processor is coming down: The iPad Pro 2022 is scheduled to ship in October
Are the suitcases hot? Meteorologist alert, the climate crisis is here!
Has been taken 4 pins, the new crown vaccine, the American Pfizer CEO is positive: taking special effects medicine
A fire broke out in Nintendo Japan headquarters, and the news said that it was caused by the charging electronic device
YouTube has been revealed as early as this fall to launch an online store to support streaming platform subscriptions
Video game company Unity rejected AppLovin's $17.5 billion takeover offer
Huawei Mate 50 series first emergency mode: can make phone calls and scan when the battery is exhausted