GitHub Trending has long been “hidden” by Chinese developers. Foreign developers SAY NO 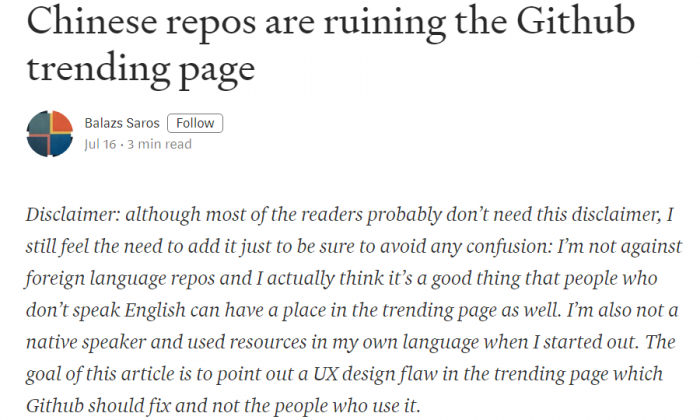 ▲ At first glance, I thought that the Chinese developer’s open source project had a big news.

At the beginning of the article, the author wrote a statement aimed at avoiding misunderstandings. He said that he does not object to the non-English repo on GitHub Trending, because this is a good thing after all, and developers who can guarantee poor English can also Have a place on this popular page. He mainly wants to point out that the user experience design of the GitHub Trending page is flawed and hopes that GitHub can fix it.

Balazs said that when he opened the GitHub Trending page at any time, he would most likely see many repos created by Chinese developers, and even encountered nine of the top 10 projects using Chinese, as follows: 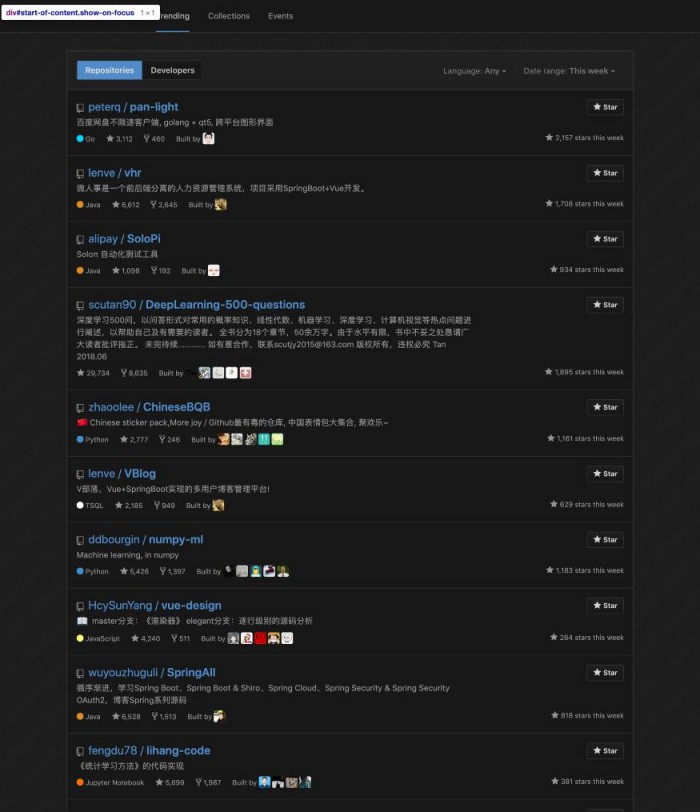 GitHub Trending was originally a very meaningful feature. For developers, this is a great place to discover interesting and excellent open source projects. For open source projects, this is also an effective channel for exposure and attention. But Balazs said that he is increasingly reluctant to open this page because GitHub Trending is basically a repo “hegemony” created by Chinese developers for a long time.

Balazs said that although the repo's readme file can be translated by the translation tool to understand the project, the text in the project's demo page and screenshots is not in English, and even the code comments are not in English. In addition, most of these projects are created for specific groups, such as “face-to-face” materials that are prepared for developers looking for a job, or someTutorialThe content of the class.

For the emergence of this phenomenon, Balazs gave his own analysis for three reasons:

In the end, Balazs re-emphasized that he was not complaining about these repos and the users who created them. He thought it was a good thing overall, but it undermined the GitHub Trending experience. To this end, he put forward his own ideas:

Related news
GitHub Trending has long been “hidden” by Chinese developers. Foreign developers SAY NO
Three questions about GitHub's entry into China: why come to China? How to enter China? What's the point?
The English name of Chinese liquor has been changed: Chinese Baijiu has been officially launched
Hot news this week
During the quarter, we signed a multi-year intellectual property patent licensing agreement with a major licensee. This positive result enables us to obtain more 5G patent licensin...
Win10 digital version will be discontinued: free whitewash is still available Microsoft has not been under the dead hand for 7 years
Microsoft posted $17.4 billion in non-GAAP net income on revenue of $52.7 billion in the second quarter of fiscal 2023
YouTube complained about: using offline return-to-work policy to illegally block contract workers from unionizing
India receives Radio Signals from Galaxies 9 billion light-years Away Astronomers: Aliens not involved
Beautiful country semiconductor ushered in the winter, US high enterprises inverted, our country market doesn't buy it!
Cybertruck skipped tickets again! Mass production of Tesla electric pickup truck will not wait until 2024.
Apple will relax measures to deal with COVID-19 's epidemic and encourage employees to go back to work
Huawei P60 Pro latest configuration chart revealed: variable aperture and satellite communications are on the list
Intel: 14 generations of Core in the second half of the year, and build a new architecture from zero next year.
The most popular news this week
The iPhone is No. 1 in China! Why do people prefer Apple to Android?
China develops starch and protein synthesis technology for corn stover: Costs drop dramatically
Technology tree point crooked? Toyota's new patent: hold the door handle can be sterilized
Eight satellites in eight hours! China rushed to Venezuela's relief efforts
Apple bet on mixed reality, but the selling point of the product is not enough.
Baidu is reported to launch an AI chat robot service similar to ChatGPT in March this year.
The most powerful SSD becomes the last song Intel retired Aoteng hard disk: 6 years of performance is still leading
Don't wait for the entry-level Tesla! Extreme Krypton 003 prototype revealed: or 160,000 starting price
Apple's car accident detection function has been misreported constantly, and the rescue department has been tortured.
To accelerate electrification, Honda China's technical research Technology and production technology companies merge