Ren Zhengfei: Trump wants to use Huawei as a bargaining chip. China won't buy it.

On May 16, the United States took some surprising steps to include Huawei in the so-called “list of entities”, prohibiting the Shenzhen company from doing business with any US company.

After Trump put Huawei on the "list of entities,"IntelAnd Qualcomm can't sell chipsets to Huawei, and Google's Android system can't provide any updates for Huawei's smartphones.

In an interview, Ren Zhengfei admitted that the initial company was not prepared for inclusion in the “list of entities”. According to Huawei's senior management, due to concerns about operating system updates, Huawei's smartphone sales in individual markets fell by 40% in the first two weeks after the ban was issued.

However, after review, Ren Zhengfei said that Huawei is fully capable of getting rid of its dependence on US core products, and they decided to cut back on some non-core products in the United States.

One month after the ban was issued, Trump’s attitude toward Huawei eased after meeting with Chinese leaders at the G20 summit in Japan. Ren Zhengfei said that after the US SMEs began to ship to Huawei.

"The comments made by Trump at the G20 summit did not have a material impact on Huawei," Ren Zhengfei told Yahoo Finance. “The vast majority of less important component supplies have been restored. But the US has yet to make any decisions about the supply of critical components.”

Another core of the US government's focus on Huawei is 5G network technology. According to Huawei, Huawei's 5G technology is self-sufficient, which means it will not be affected by any US behavior. “The more advanced the product, the less risk we face,” Ren Zhengfei said.

“This makes it difficult for us to manage this company and work with them,” Ren Zhengfei said. “Now we can't invest further because we can't get in touch with Futurewei employees. What is our next step? It will depend on the direction of the US government.” 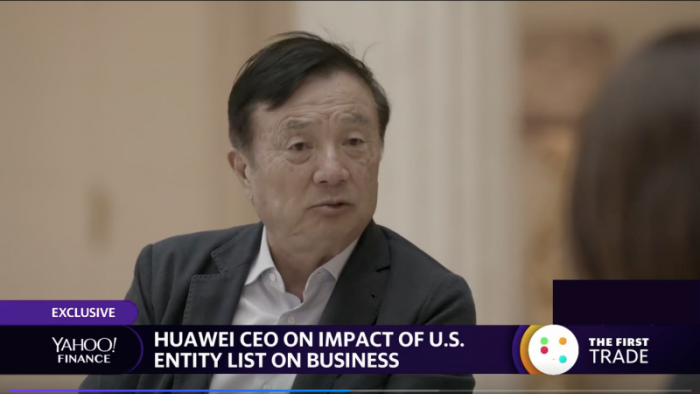 "Trump knows nothing about us"

For a long time, Huawei's equipment has been regarded by US lawmakers as “threatening national security,” but the Trump administration has targeted the company in an unusual way, not only restricting its operations in the United States, but also trying to convince its allies to join the battle group. , isolated this Chinese company.

For Ren Zhengfei, the United States is doing this to curb Huawei's advanced technology. Ren Zhengfei, who has been tracking Trump's post, said that Trump's position has changed since the US Department of Justice filed a criminal charge in January that the tech giant had stolen trade secrets and violated US sanctions against Iran.

"The United States is a country ruled by law. Is the legal issue allowed for negotiation? The legal issue should be resolved in court, right?" he said.

Since Huawei’s chief financial officer, Meng Yuzhou, was arrested in Canada last November, Huawei has filed lawsuits against the US government on several occasions. However, Ren Zhengfei does not believe that Huawei poses a security threat to the United States. "We don't have any network in the United States, and we don't plan to sell our 5G products there," he said. "Trump knows nothing about us. He wants to use Huawei as a bargaining chip, but China doesn't seem to buy it, right?"

Huawei has repeatedly denied any relationship with the Chinese government and the military and said it would not seek assistance from the government.

"Huawei is far ahead of American colleagues"

Ren Zhengfei praised the United States when talking to Yahoo Finance and talked about how American entrepreneurship inspired him to start his own company. In an hour-long interview, he reiterated his trust in the US legal system and hoped to solve Huawei's problems in court.

Despite this, he believes that Huawei is leading the US in key areas such as new technologies and 5G.

"Although the United States is very strong, they have not developed all the technology, so we will pick us up with some trivial problems," Ren Zhengfei said. "Our optical chips are the most advanced in the world. We can survive in many places without US suppliers, but we don't want to."

In the past 20 years, Huawei has always symbolized the progress of China's science and technology. The development of the company is consistent with the government's goal of achieving self-sufficiency in key technical fields. Now, it has a dominant position in the 5G field, with more than 50 commercial contracts, and is the largest among the major equipment manufacturers. But based on the so-called "national security" issue, US operators are now only working with companies such as Nokia.

Ren Zhengfei said that the future of the Internet of Things (IoT) involves supercomputers, super-large storage and ultra-fast connections. He believes that the US ban on Huawei will make the United States lose the advantage of developing 5G.

"Even if you have a supercomputer and a very large capacity connection, the US may still lag behind because they don't have ultra-fast connection technology," Ren Zhengfei said. "Rejecting Huawei is the beginning of the United States."