The article on AMD's new processor code and roadmap on Planet3DNow has drawn a lot of attention and provides a lot of information that was previously unknown.

Among them, the third generation of the ThreadRipper product line codenamed Castle Peak, the fourth generation product code Genesis, which is located in two geographical coordinates of Washington.

After reading the HEDT, let's take a look at the Ruilong family. 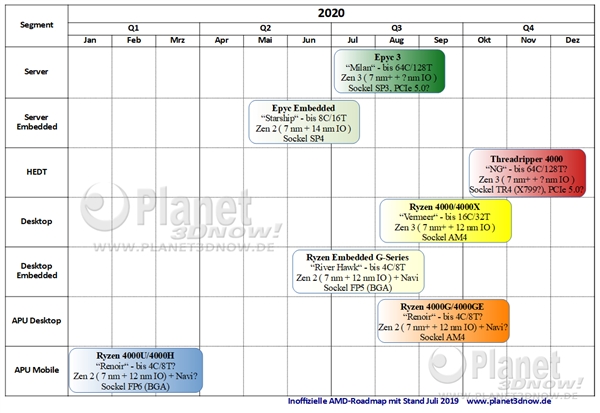 The products in the third quarter are the most competitive, after all, the Zen 3 architecture will be freshly debuted.The first show is the third generation EPYC codenamed Milan, with a maximum of 64 cores and 128 threads.In August, it will be the Ruilong 4000 desktop processor and the Ruilong APU product. The former will of course be upgraded to Zen 3, codenamed Vermeer, up to 16 cores, continuing the AM4 interface; the latter will be upgraded to the Zen 2 architecture with Ryzen 4000G. /GE's naming, Zen 2 architecture + Navi.

The fourth quarter of the same year was a thread tearer 4000 product with a maximum of 64 cores and 128 threads. This roadmap echoes the news on Monday, AMD's fastest third-generation thread ripper in October, up to 48 cores?