In May this year, Rebao acquired about 10% of its shares through stock exchange and strategic alliance, stepped into the market of micro-LED production, research and development and sales, and deep layout of wearing devices. Both sides have completed the development of micro-LED modules, and made public their research and development achievements at the 2019 SID exhibition.AppleFavorite, it symbolizes a major breakthrough in Taiwan's new generation display technology, and it is also the first time that Taiwanese factory has won the application order of Apple's new generation display.

For Apple Micro LED, Mr. Jung said he did not comment on a single customer. Rebao said that its micro LED module production line is ready, aiming at full-color micro LED applications under 3 inches, and there is indeed a contact with the American wisdom watch industry.

According to Rebao, with past experience, it takes about nine months on average to contact European and American customers for new products to go on the mass market. After finalizing this season, it may start to prepare for mass production in the fourth quarter, and the end products will be available as soon as 2020. It can be inferred that the time frame for brand companies to launch new products using Micro LED will be next year. 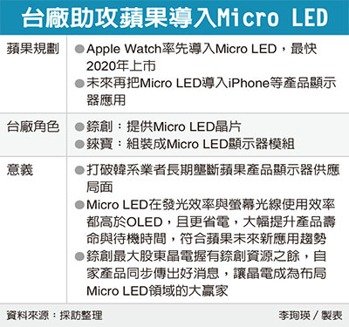 Industry analysis, since the advent of Apple Watch, has adoptedOLEDDisplay, Lejin Electronics, South Korea（LGD) As the main supplier, Laobao and Niang Chuang supply Apple Watch together, which means that the industry has long been looking forward to the commercialization of Miro LED technology. Apple will also get rid of the long-term dependence on Korean manufacturers to supply displays. Laobao and Niang Chuang have the experience of supplying Apple Watch, which is expected to extend to the future.The iPhoneAnd other products.

According to Apple's May earnings report, wearable devices and services account for nearly 30% of revenue in the second quarter, including Apple Watch, AirPods and Beats headphones, which are the fastest growing businesses. Apple is optimistic that non-iPhone revenue will continue to grow strongly, which will benefit the supply chain.

According to the industry, the efficiency of micro LED in light emission and screen light use is higher than OLED, and more power-saving, greatly improving product life and standby time. In particular, Watch OS 6, a new generation of Apple watches operating system, has the greatest feature that it can be completely separated from the iPhone and run independently. Its endurance is more important. The endurance brought by the power saving of Micro LED is in line with the new application trend of Apple in the future.