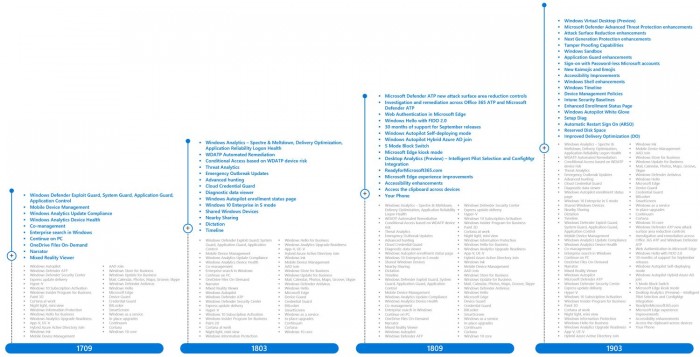 The traditional Windows service method is the release of major Windows versions, followed by the launch of service patch packages and monthly update rollups. With Windows as a service, Microsoft has greatly simplified the way Windows systems are updated. Windows 10 currently only needs to provide two updates -- feature updates and monthly updates. 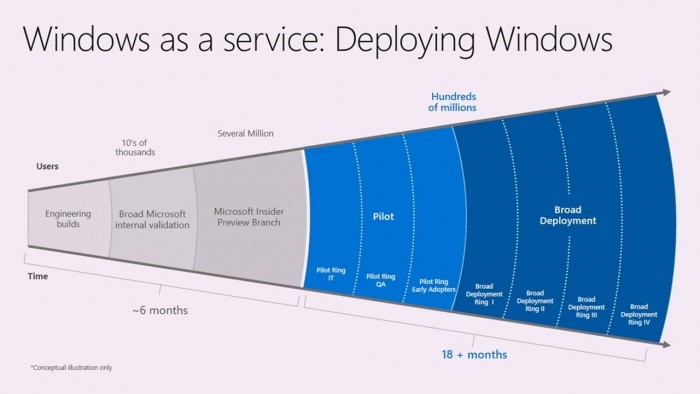 Microsoft said that Windows as a service has many advantages, including the ability to update Windows systems faster, consistent release stability and quality improvements, and better compatibility with the latest standards and applications. There is still about 8 months to stop support from Windows 7, which means that the traditional Windows Update update method has to say goodbye to us. In today's updated blog post, Microsoft shared the main reasons why Windows as a service is more efficient than traditional update methods:

Microsoft said that the Windows-as-a-service approach greatly improved the stability of the system by updating the system every month. Currently, Windows 10 updates need to be pushed to 800 million active devices, with more than 35 million applications, including more than 175 million application versions. Microsoft also provided updates for 16 million unique hardware and driver combinations.

Another big advantage of WaaS is that users don't have to install a new operating system every few years to get security patches and features. Users can continue to use Windows 10 and receive regular updates without worrying about security patches.

Over time, Windows 10's feature updates introduce new features, many of which are designed to increase the productivity of IT professionals.

Windows as a Service also lowers total cost of ownership by helping administrators and IT professionals focus more on the following:

Based on the accumulated push experience accumulated in the past few years, especially after the major update of Windows 10 October update (Version 1809), Windows 10 May 2019 (Version 1903) has some problems, but the upgrade experience is smoother than the previous version. There are fewer problems with user feedback. And in software updates, Microsoft gives users more control, providing updates with higher quality and transparency.

Related news
Microsoft lists Windows as a Service advantages: safer, more efficient and more cost effective (Figure)
Hot news this week
The developer of the dating app Tinder has reached an agreement with Google over billing rules for its app store
Red Elf Lightning erupts in the Himalayas Spectacular Spectacle: Experts Reveal What Exactly Is This?
The founder of the Internet Quick Hand Su Hua was taken away for investigation, and the fast hand responded: the news was not true
Or for Studio Display Pro, the release of Apple's 27-inch Mini LED-backlit Display has been delayed by October
One picture to understand! Blue Factory has issued 3 new machines in a row: self-developed chip blessing, the narrowest lower border
Tencent established a smart technology company in Chengdu, and its business scope includes Internet data services
Economist credit card monthly bill $11.4! Only paying for a purchase of Tencent Music, the account manager is busy "condolences"
I once touched the ceiling of the mobile phone screen! Well-known brands announced that the new flagship is the first to carry the Snapdragon 8+
Or has it been spread insidiously in Communities in Europe and the United States: Should We Be Worried About Monkeypox? Experts demystify
Huawei and the Chinese Academy of Sciences jointly developed the new 3D DRAM solution is expected to break through the key root technology of storage
The most popular news this week
The 780 billion "oil leader" CNOOC rose and fell in the intraday, and the stock price hit a new high since its listing
The largest acquisition case in the history of 400 billion chips Chen Fuyang and Dell only used to meet
Visual China responded to 8 yuan Audi photo questioning: 1500 yuan for sale, the original author only received 2 yuan
Musk: The U.S. recession "is actually a good thing"
Online literature lost 6.2 billion yuan due to piracy last year? 522 online writers signed a petition against piracy
Baidu opened up nearly 15% and Alibaba opened up more than 12% in Hong Kong
Game cards sell crazy and make a lot of money! NV's fiscal first quarter revenue increased 46% year-over-year
Apple's iOS 16 Ultimate video leak will add a ton of utility features
Nearly 2.5 billion huge cash-outs! Lei Jun's subordinate Shun for capital to let go, tens of billions of "sweeping mao" and then usher in a large reduction
Suspected new Xiaopeng P7 exposure: multiple large screens, rear passengers can play games