WPS is not clean QQ function is too bulky? Why not try the international version?

Opening the international version of QQ for the first time gave the world an illusion that it had opened up QQ a decade ago. 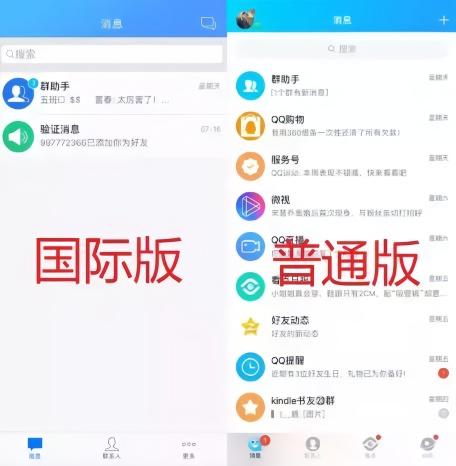 All the complicated functions of QQ in the domestic edition, such as micro-view, service number and reading daily.No international edition!

Is this not the QQ that has not been updated in a decade?

Even the next announcement is filled with a kind of retro-classic unique to the post-90s era. 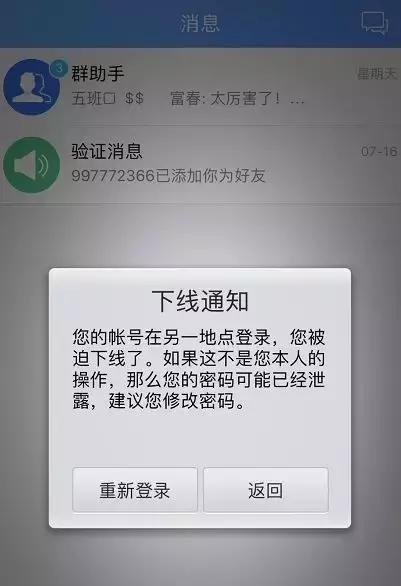 At the bottom of the interface bar there are only messages, contacts and more settings, these simple options.

But a more compact vintage design also means that the international version of QQ does not have so much advertising!It is just a clean and concise communication tool. 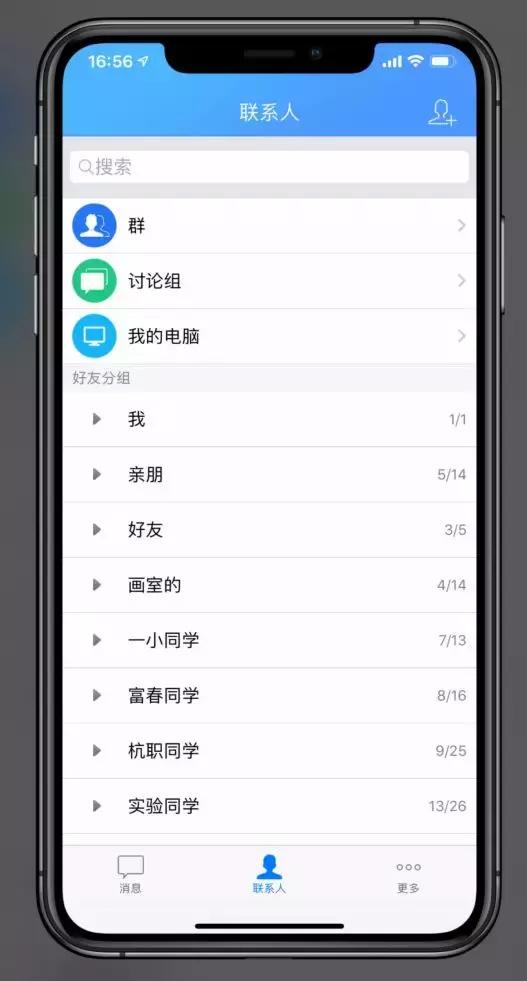 As an international version of QQ, its core function is to meet the needs of people in different languages to chat.

The international version of QQ can be directly linked to your facbook, Google and other accounts.

With the exception of no advertising and concise pages, Shichao could not find a reason to recommend the international version of QQ to its friends.

But interested friends can go to this international version of QQ archaeology exam, it can absolutely remind you of surfing the Internet. 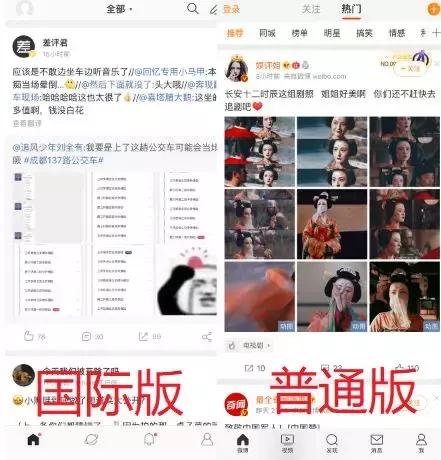 Compared with the ordinary version, the international version of microblog has reduced all-pervasive advertising and marketing numbers. Most importantlyIt's back to normal time line!

But the corresponding international version of micro-blog is also a castrated micro-blog, you middle-aged and old friends want to make a list for Jay Chou? 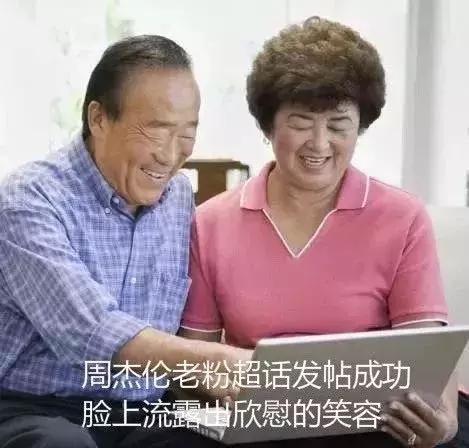 Sorry, the international version of the microblog tells you: No, you can't...

There is not even a list entry for the international version of Weibo. 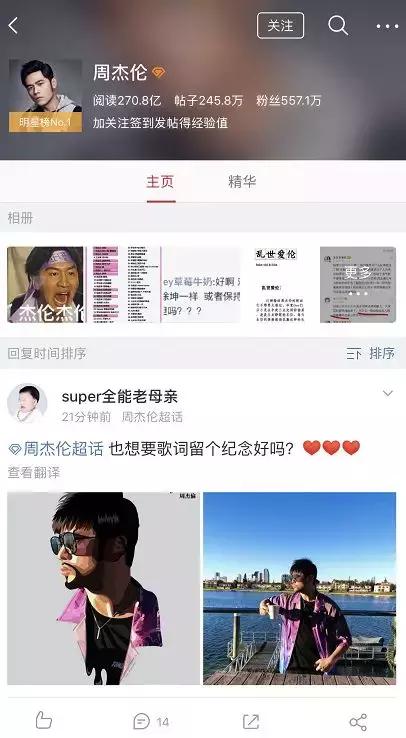 If you're tired of the chaotic product logic of microblogging, the ubiquitous advertising and various recommendations, and just want to see what bloggers you care about update, then the international version of microblogging is worth recommending.

The above two international versions of APP can be summed up as clean and tidy. 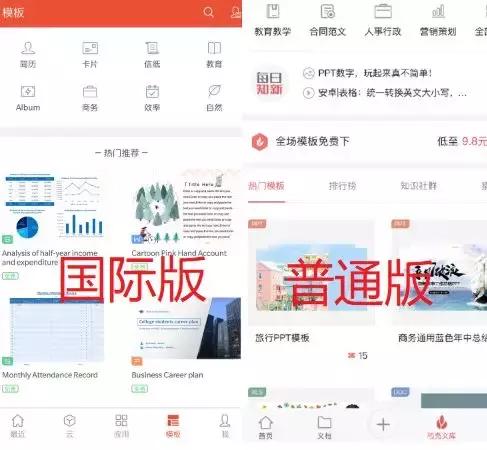 Yes, you heard me right.

The international version of WPS is so conscientious that apart from free templates, there are no redundant advertisements for the entire APP. 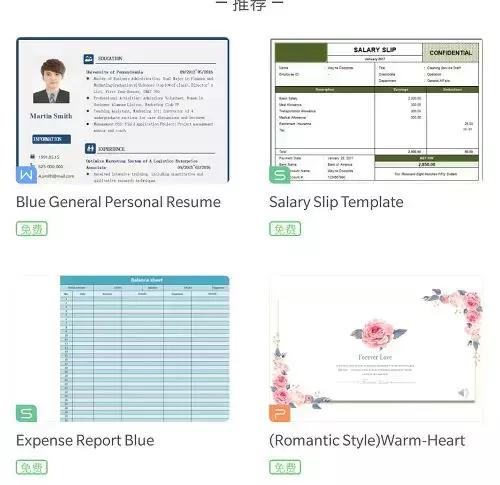 However, the international version of WPS still has some payment items.For example: PDF to Word, OCR scanning these need to buy members to unlock the advanced functions.

Shichao feels that the international version of WPS is already ahead of the domestic version of WPS in terms of template free. It is highly recommended for friends to download.

Finally, what I want to tell you is:The two versions of WPS account are also not universal, and buddies need to register an international version of WPS account.

For example, Youku and Ikeyi are the same overseas editions.The long opening advertisement at the beginning of the video was cancelled. 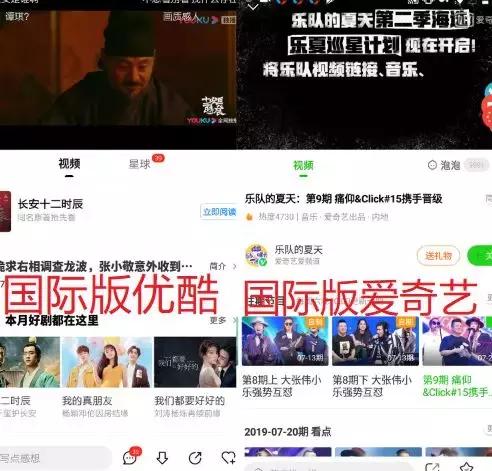 However, the paid viewing content of the two videos APP still needs to buy members to watch in the international edition.After all, everyone still wants to have a good meal. It's good enough to remove the first advertisement.

But it is worth noting that:Due to regional constraints, many video content can not be viewed on the international version of video APP. 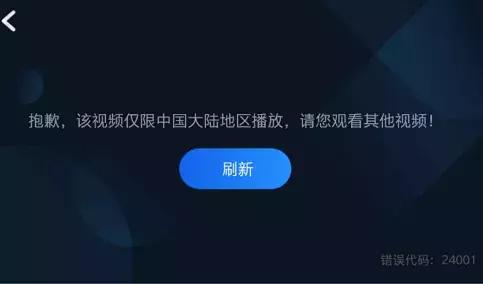 Well... Want to go to the international version of the video buddies, or to find out whether these video broadcasting copyright has spread to overseas markets.

Otherwise, I downloaded the international version of APP for the purpose of avoiding advertisements reasonably.One of the videos was only broadcast in mainland China, but the power was discouraged.

Above are several international versions of APP summarized by Shichao. It is not difficult to see that no advertisement is the common feature of these apps.

However, poor friends do not need Tucao: the moon in foreign countries is more round.

Because of the audit mechanism,PPP with various advertisements and permissions is very difficult to pass audits in overseas markets.And in order to open up the overseas market, these apps also give some small benefits.

"Home flowers do not have the fragrance of wild flowers"

Related news
New office suite choice WPS Office for Mac vs. Microsoft Office 2019
Golden Mountain WPS, aiming at the "next generation" office, announces "the future is coming"
WPS is not clean QQ function is too bulky? Why not try the international version?
Jinshan office WPS will be launched tomorrow! Lei Jun: an inspirational story of persisting in dreams and winning in the end
Wait 20 years! Listing of Jinshan office WPS: opening price increased by 205%
Following WPS's split and listing, jinshanyun's going to the U.S. to go public is to dig "cloud mine"?
Even better than excel? These functions of WPS are really fragrant
Hot news this week
The developer of the dating app Tinder has reached an agreement with Google over billing rules for its app store
Still did it! Canada has banned Huawei and ZTE from participating in the country's 5G network on "national security" grounds
Red Elf Lightning erupts in the Himalayas Spectacular Spectacle: Experts Reveal What Exactly Is This?
The founder of the Internet Quick Hand Su Hua was taken away for investigation, and the fast hand responded: the news was not true
Wang Xiang, president of Xiaomi, explained that a shortage of low-end chips is a major challenge in overseas markets
Or for Studio Display Pro, the release of Apple's 27-inch Mini LED-backlit Display has been delayed by October
Tencent Q1: The business service business has "slightly decreased" year -on -year, and resource centralized video cloud and network security | View financial report
One picture to understand! Blue Factory has issued 3 new machines in a row: self-developed chip blessing, the narrowest lower border
Sony released the active noise-canceling headphones WH-1000XM5, equipped with 2 chips and 8 microphones
Tencent established a smart technology company in Chengdu, and its business scope includes Internet data services
The most popular news this week
Xiaomi's first Leica flagship! Xiaomi Mi 12 Ultra's latest appearance map: the screen ratio is amazing
The founder of Xiaopeng Auto! He Xiaopeng uses "Keda Duck" to ask for help online
Not afraid of merchants "first rise and then fall"! 618 Taobao launched a new feature: one-click refund of the price difference
How does the Internet make People Copy each other
Fed Vice Chairman: The future digital dollar may complement the coexistence of stablecoins and commercial bank currencies
ZHANG Pingan, CEO of HUAWEI CLOUD: The value of data governance in China has not been fully tapped Data and AI should be accelerated
Shenzhen Atmosphere! The sales price of mobile phones, computers and other products is subsidized by 15%
Microsoft shows third -party components: Win11 chicken rib function is saved
No need to grab it! Sony announced an increase in PS5 shipments
Audi advertising poster photos only sell for 8 yuan? Photographers question the unreasonable use of the photo purchase