From the financial report,Although 10 nanometers have been postponed, Intel's performance in the PC market remains strong. However, in the data center that has grown in recent years, revenues in this quarter fell 10% year-on-year. 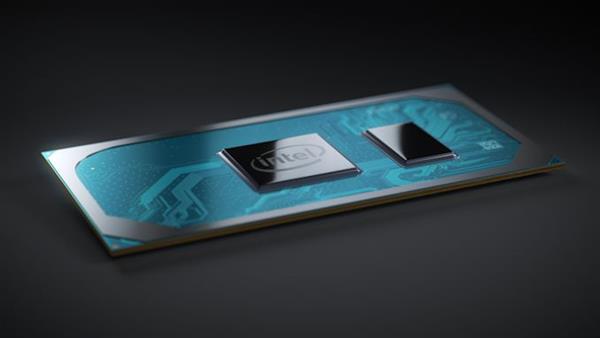 Intel this week announced its second quarter earnings for the 2019 fiscal year. Overall, revenue fell 3% year-on-year to US$16.5 billion, and gross margin was still below 60% that Intel hopes to maintain, but this quarter's 59.8% gross margin has improved significantly from the previous quarter's 56.6%. Operating income for the quarter fell 12% to $4.6 billion, and net income fell 17% to $4.2 billion. Earnings per share were $0.92, down 12% from a year ago.

Of particular note is that in the earnings conference call, Intel said it has begun shipping its 10th generation Ice Lake core processor since the second quarter. These CPUs are based on Intel's 10nm process technology and were approved by OEMs in early 2019 and are expected to enter the mobile PC market during the US holiday season.

According to reports, Intel began to produce Ice Lake processors in the first quarter to build inventory to support large-volume shipments in the second half. These processors passed PC manufacturer certification in the first quarter to the second quarter, and Intel began shipping later this quarter, which was earlier than market analysts expected.PCs with Ice Lake processors are expected to arrive in the fourth quarter of this year, given the time required to assemble from PC to market. Of course, some retailers may be faster.

“We will begin shipping Ice Lake processors in the second quarter to support sales during the holiday season.. ” 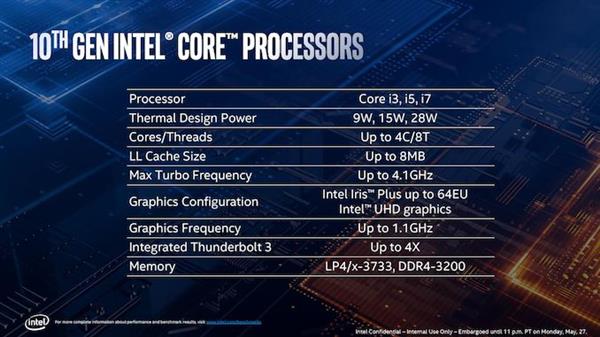 Intel officially launched the notebook-based Ice Lake-U and Ice Lake-Y CPUs based on the Sunny Cove microarchitecture at the end of May. This series of products is officially called "Intel's 10th generation core" processor, which contains 11 processors (from Core i3 to Core i7), has two or four general-purpose CPU cores and different GPU configurations, and 9W, 15W and 28W TDP are on the market.

Intel is committed to a new CPU that delivers an average 18% improvement in raw clock performance compared to the 2016 Skylake core (which has been making minor adjustments since then) and VNNI and encrypted ISA instructions. In addition, the Ice Lake CPU integrates Intel's Gen11 graphics core with up to 64 execution units and delivers significant performance gains. The updated iGPU restore supports DisplayPort 1.4 and HDMI 2.0b output as well as HDCP 2.2 technology. 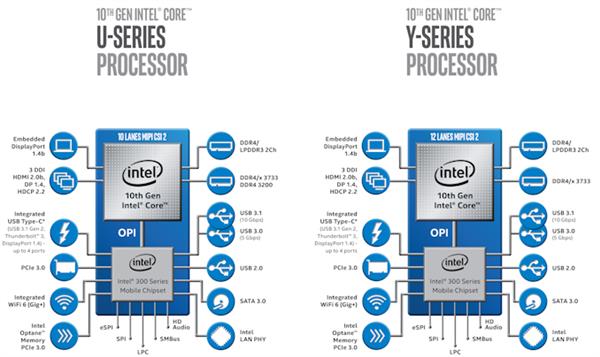 These processors continue the tradition of Intel's low-power mobile processors, with the new 300-series chipsets natively supporting Thunderbolt 3, Wi-Fi 6 MAC (RF modules will be sold separately, and other features such as PCIe 3.0).

Looking back at the history of Intel's 10 nanometer process, it is a bit long and bumpy. Fortunately, the company seems to be finally released in the fourth quarter of 2019.

In the past few years, the data center group has been the highlight of Intel's revenue growth, but now the growth of the data center group is also the first to be affected by the economic slowdown. In fact, Intel's PC Group managed to keep revenues comparable to last year. In terms of earnings, it grew 1% from the second quarter of 2018, with revenues of $8.8 billion. During the quarter, the client computing group's operating income was $3.7 billion, up from $3.2 billion a year ago, so despite the 10 nanometer delay and increased competition, Intel's performance in the PC space is still quite strong. 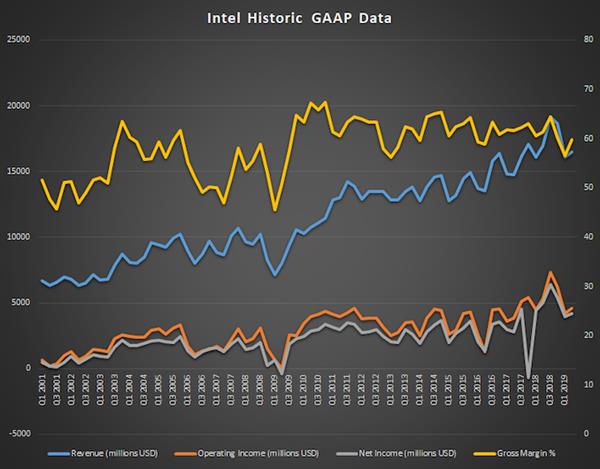 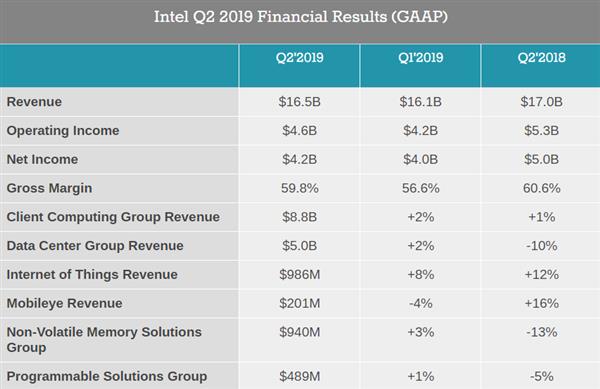 However, Intel Data Center Group's revenue fell 10%, and revenue in the second quarter was $5 billion. The biggest single decline was corporate and government revenue, which fell by 31%, and cloud revenues fell, although it was down only 1% compared to last year, and the communications service provider sector revenue rose by 3%, offsetting some decline. despite this,

Intel's IoT revenue continued to rise, reaching a threshold of $1 billion/quarter, and achieved record quarterly revenues in the second quarter with revenues of $986 million. Compared with a year ago, the growth rate was 12%, and the demand for high-performance processors drove revenue growth. Operating income also increased by $51 million to $294 million. Mobileye's revenue increased 16% to $201 million and revenue was $53 million, an increase of 20.4%.

Finally, the revenue from the programmable solution was $ 489 million, a 5% drop from last year, and Intel did not give any explanation. The group's operating income has decreased by nearly half compared to last year, which was $52 million in the quarter, compared to $101 million a year ago.

Related news
Intel: 10nm Ice Lake processor has an 18% IPC boost over previous generations
The 10nm Ice Lake processor is worth waiting for! Intel indicators fully surpass TSMC 7nm
Intel: 10nm Ice Lake processor has started shipping in the second quarter
Deep analysis of Ice Lake architecture Intel's Athena goddess
Intel 10nm process ice lake SP server chip soars 38 cores support PCIe 4.0
Benchmark test shows that the graphics performance of tiger Lake chip is twice that of ice lake chip
Intel roadmap update: ice lake SP and alder lake will be launched in the second half of this year and next year
Hot news this week
Titanium Media Publish Assesum: People's Bank: Digital RMB Winter Olympics pilot has entered the sprint phase; Tesla announced that 250,000 Powerwall energy storage power stations have been installed
Capital does not love SAIC, "flying" subsidiary, Jet Hydrogen Technology intends to go to science and technology board
Study on the sequelae of COVID-19 in the Chinese team: Shortness of breath, depression and other problems still existed nearly one year after discharge
Great Wall electric car goods wrong board! Little sister rights: female car owners are not stupid money
Tencent responded to "APP to get ridiculous": Upgrade APP is now downloaded for user rights protection
US media: If it is unable to quickly solve the problem of incomplete behavior in the company, the moving Blizzard CEO will consider resignation
Gree announced the implementation of the double-holiday work system Dong Mingzhu from the media voice netizen God reply
Wechat: It will not be possible to create an account for controlling comments and Revelations related to star artists
Netease Cloud Music will soon be listed on the back of 200 million monthly live users how to make money
The ninth batch of online anchor warning list announced Wu Yifan, Zheng Shuang and other 88 people in column
The most popular news this week
Huawei Watch GT 2/2E Upgrade: Download third-party apps
Miit: China's 5G terminal users reach 450 million! Accounting for more than 80% of the world
Sources say tesla's German plant will start production in December, while Volkswagen's Audi will start production of the Q4
The first batch of invited to become Apple ecological developers, Bunkes launched a variety of Magsafe accessories
Intel ignition level 56 core bubble! AMD can go to sleep
5G Core Standard Essential Patent Competition: Huawei Wins again!
MIUI development version upgrade! 4G was "discriminated against"
Tea Party CEO Tan Jong: Bringing together youth and women to build a new future for Asia
The birth of the Chinese own genetic variability is named "female 娲"
The most dead industry: the Internet can only row the second first thoughts