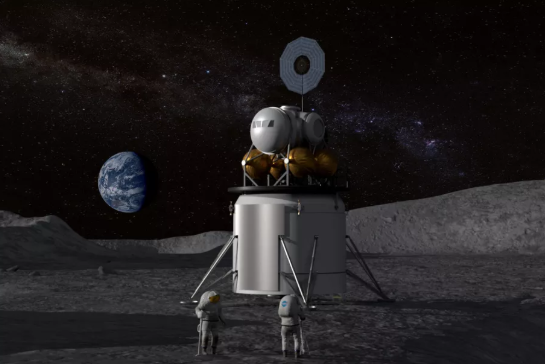 Ten companies now have 19 partnerships with NASA through the agency's Collaborative Opportunity Initiative (ACO). Last October, NASA called on the industry to make a suggestion detailing the different technologies they hope to develop through the program. Now, selected companies will gain the expertise and resources from various NASA centers to help make these space technologies mature - the company itself does not need any fees.

One of the big winners of the plan was Jeff Bezos (Jeff Bezos) 's Blue Origin, through which it established three development partnerships with NASA. The company recently unveiled the concept of a lander called the Blue Moon (Blue Moon), which aims to bring humans to the moon's surface. Now, Blue Origin, with the help of NASA, will develop a new lunar navigation and landing system and test new materials that can be used in lunar lander engines. The company will also try to develop a new power system that will help keep the "blue moon" lander running at night-in two weeks of complete darkness, the temperature can drop to-280F (- 173C).

At the same time, Blue Origin's competitor SpaceX is also working with NASA through the ACO program to develop technologies that are critical to the company's future Starship rockets. SpaceX is currently developing the interstellar spacecraft to bring cargo and personnel to deep space destinations. Now, SpaceX will get help from the agency to figure out how to land giant rockets such as starships on the moon's surface. In addition, SpaceX is letting NASA help figure out how to transfer rocket propellant in space, which is a necessary condition for sending a spaceship to the Earth.

Developing a method of transferring propellant in space can also change the "rules of the game" for companies other than SpaceX. For example, many companies want to dig the moon's water and turn it into a rocket propellant that can be stored in so-called "warehouses" in space. In this way, the rocket can get fuel and travel further afield. But the only way to do this is for engineers to develop autonomous spacecraft capable of transferring ultra-cold and sometimes volatile propellants in space, which is especially difficult in an environment without gravity. NASA has been working on this technology, and some spacecraft have demonstrated this capability in space. But this process is still far from mature.

Other companies like Maxar are also working to develop some of the key geospatial technologies, including new solar panels and robots that can be assembled on the track. Some groups will study technologies related to the reuse of rockets, which SpaceX has been paying attention to in recent years. For example, Sierra Nevada will look at a way to recover the upper part of the rocket after it is launched from Earth - a feat that SpaceX has not yet tried.

All of these technologies sound very exciting, and some are critical to achieving NASA's goal of bringing people to the moon and Mars. However, these partnerships are just getting started, and it is unclear when these technologies will become a reality. Ultimately, NASA hopes that by providing some help to the industry, the organization can avoid the high cost of developing these features independently - and then benefit from these technologies as they mature.

Related news
NASA will help companies such as SpaceX/Blue Origin develop technologies that involve the moon and Mars
What is the Mars 2020 Mars Rover? Go to the NASA assembly room and have a look.
NASA completes separation of Mars 2020 landing platform
NASA's'Moon to Mars'project may face huge changes
NASA is finally going to unveil the official name of Mars 2020
NASA chooses SpaceX, blue origin and dynetics to develop lunar landers for it
NASA rated Artemis lunar mission partner blue origin better than SpaceX
Hot news this week
Apple store staff committed suicide due to work pressure?
Xiaomi has issued a patent for autonomous driving, which can automatically adjust its driving ability according to the road class
U.S. inflation blasts Nearly half of households aim to live: the price of the commodity has gone up outrageously
Jiangsu Bank's Beijing branch was fined 4.9 million for "seven crimes" involving the illegal issuance of loans
Huawei has released a patent on the packaging structure that solves the problem of black spots on display panels
More than 20,000 domestic Model Y "broken shaft" recalls Tesla's ability to dump pots surprised netizens
Alipay announces automatic identification of automatic identification of vehicles to enhance the quality of drivers
Browser Search Engine Giants Quasi-Upgrade Microsoft to issue an unsafe warning to 2 billion Chrome users
Could new SEC rules prevent Chinese companies from listing in the US? The Foreign Ministry responded: firmly opposed
The U.S. blocked Avista's acquisition of chip giant ARM, fearing it would hurt competition and neutrality
The most popular news this week
AMD YES! Musk praises Tesla's 'Witcher 3'
Standard Snapdragon 8 Gen1! Exposure millet 12 Pro released this month: screen specifications are higher
A Japanese billionaire has flown to the International Space Station on the most expensive charter flight in history
US group public bag app: system network abnormal recovery rider can be delivered normally
Visa CFO: The company can solve the problem with Amazon, and the relationship will resume as it did
Yumei Technology responds to employees: there is cash compensation and option compensation, and the company operates normally.
Abandon ARM! Huawei's all-self-research chip announced: new architecture CPU plus holding
It is 200 million to learn Tesla Volkswagen will be involved in clean energy construction.
TNGA + hybrid! Toyota's flagship Sedan in China looks a lot like a Lexus
Liang Jianzhang: The real universe will certainly prevail over the meta-universe, which may bring population risks and technological stagnation