The 2019 World Artificial Intelligence Conference will be held in Shanghai on August 29-31. Musk has confirmed attendance and will deliver a keynote speech. 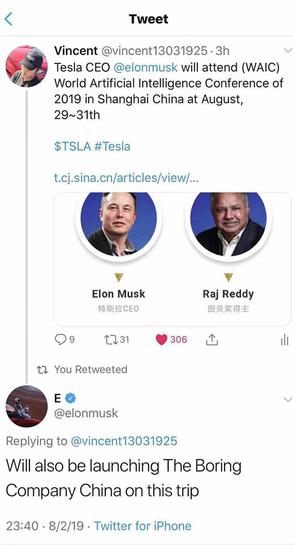 In December 2016, Musk, who was in a traffic jam, said that he wanted to set up an underground tunnel company to solve the traffic congestion problem. Because in English, the word Boring has the meaning of excavation, so the company was named The Boring Company.

According to Musk's vision, he will install a "pallet" for the car to be suspended on the ground. After the car is parked, the pallet will drop to the ground and transport the car quickly between the underground tunnels, reaching a maximum speed of 200 kilometers per hour. In addition, these trays have unified computer monitoring that optimizes pallet speed through seamless arrangement. In the tunnel, the system will automatically transfer the car through the electric skateboard, which has a maximum speed of 130 mph. Musk has said that this underground tunnel network will have up to 30 tunnels for transporting cars and super trains.

It’s unrealistic to send a car to the underground. In fact, more than two years since its establishment, Musk’s “boring company” has made some progress in the United States.

On July 20, 2017, Musk announced that the “boring company” had been “verbally” approved by the regulatory authorities and began planning to establish a super-high-speed underground transportation system connecting New York and Washington (about 363 km). Travel time between cities is reduced to 29 minutes.

On May 22 this year, "boring company" also received the first order. The Las Vegas Rally and Visitors Authority (LVCVA) voted through a $48.6 million contract with Musk's tunnel mining company, The Boring Company. Under the contract, “Borry Company” will build the LVCC loop on the ground floor of the Las Vegas Convention Center, including two lanes, three stations and a pedestrian tunnel, so that visitors or visitors can be transported from the new showroom to the new North Hall. .

Musk came to China to dig a tunnel? Plan to launch the Boring Company China project

Related news
Musk confirmed that attending the World Artificial Intelligence Conference will launch its China project
IBM exits RSA conference 2020 security technology summit due to public health and health concerns
Semicon China: Huawei and Exxon bring semiconductor intelligent quality inspection and measurement solutions
Cheers! NVIDIA RTX space appears in bilibilibili world 2021
China Vows Full Carbon Neutralization for Beijing Winter Olympics
China, U.S. Issue Joint Declaration on Climate Action at GOP26
Hot news this week
Zhao Lijian responded to the British "blocking" Huawei: generalizing the concept of national security harms others and harms themselves
Zhao lijian said the UK's decision to block Huawei under PRESSURE from the US was damaging others and not benefiting itself
Tencent web drama "Beginning" Douban opening score 8.2: the male protagonist's mobile phone has become a highlight!
Samsung's new notebook patent publication: the keyboard is divided into two-quarters after two folds.
AsiaInfo Technology Announces Acquisition of iResearch Consulting to continue to increase digital operations and digital and intelligent transformation
Canon China plans to close some production lines in Zhuhai in response to the zhuhai company's suspension of production
Breakthrough: Chinese scientists have discovered and confirmed the boson exotic metal for the first time
Volkswagen's sales in China plummeted, a record low in 8 years! The CEO revealed the reason for the helplessness
Only 2 decisive headphones Class A Certification of the Ministry of Industry and Information Technology? Perhaps it is misunderstanding
1KW electric energy production 3KW heat Tesla hot pump low temperature hidden dangers were investigated
The most popular news this week
Can Jay Chou listen free? Look at 15 seconds, listen to 30 minutes song, QQ music internal test free listening song mode
Activision Blizzard employee: It's good that the company is being bought by Microsoft. Maybe it can be saved
The Hang Seng Technology Index is 0.95%: Netease has fallen over 3%, and the quick hand fell over 2%.
China's groundwater resources reserves are identified for the first time: the southern freshwater reserves account for only 5% of the country's total
Microsoft Gaming Executive: Had a friendly call with Sony management
The United States seeks to contain scientific giants Google 2021 year tour spending increased by 13 million yuan
QQ Music ranked third among the world's most popular music platforms
IPHONE open side load? The US Senate Group has approved the bill to vote
钛媒体科股早知道：价格创十年新高，需求占比或提升5倍以上，特斯拉全球出击疯狂抢占该资源；国家卫健委研究出台更多积极生育支持措施
Take stock of Microsoft's top ten acquisitions: 3 of the more than 10 billion US dollars Nokia is not in the top 5