What is the Mars 2020 Mars Rover? Go to the NASA assembly room and have a look. 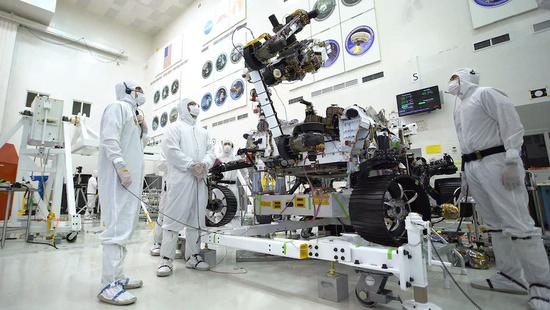 Illustration: This photo was taken on July 19th in the clean room of the JPL spacecraft assembly facility in Pasadena, California. The 2.1-meter-long robotic arm of the rover and the 40-kilometer turret work together.

The Mars 2020 Mars Rover is scheduled to take off from Cape Canaveral on July 17, 2020 with the Atlas 5 rocket of the United Launch Alliance (ULAA). When the engineering team assembled the rover in JPL, other engineering teams also completed the manufacturing of the cruise and descending phases of the Mars exploration mission, allowing Mars 2020 to sail from Earth to Mars and through the Martian atmosphere until February 21, 2021. Smooth landing.

Matt (Matt Wallace), Deputy Project Manager for JPL Mars 2020, said: "We are very close to completing the assembly of the Mars 2020 rover. Our progress has exceeded 95%, and may even reach 98%. " 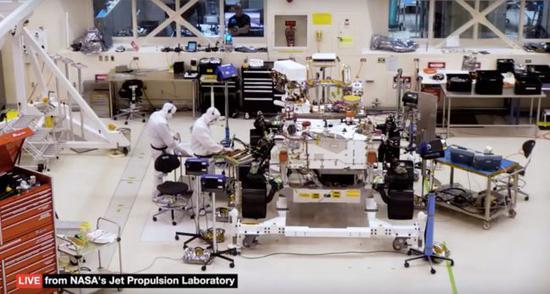 Illustration: JPL, Pasadena, Calif., June 14, 2019, technicians are working for the Mars 2020 Mars. This image is a screenshot of NASA's "Seeing 2020" live broadcast, which clearly shows the first set of wheels of the Mars.

In June of this year, workers in the JPL spacecraft assembly facility assembled the Mars 2020 Mars Rover's remote sensing mast, six wheels and a 2.1-meter-long robotic arm. JPL's staff also completed the installation of most scientific instruments, many of which were installed directly at the end of the remote sensing mast and the robotic arm.

The experience of JPL engineers in creating the Curiosity Mars also accelerated the assembly of the Mars 2020 Mars.

In order to search for signs of the existence of ancient microbes on Mars, the Mars 2020 Mars is also equipped with a series of new scientific instruments. In addition, the Mars 2020 Rover also carries a set of untested internal devices for collecting, storing and sealing core samples for bringing them back to Earth. The improved wheel design avoids the problems that plague the Curiosity Rover. The upgrade of terrain-associated navigation can guide the Mars 2020 Mars to avoid boulder, craters and other obstacles during the down phase to ensure a smooth landing.

The scientific instruments and sample storage systems of the Mars 2020 Mars Rover are the most difficult part of the development task. But Wallace said, "All the instruments are working well." 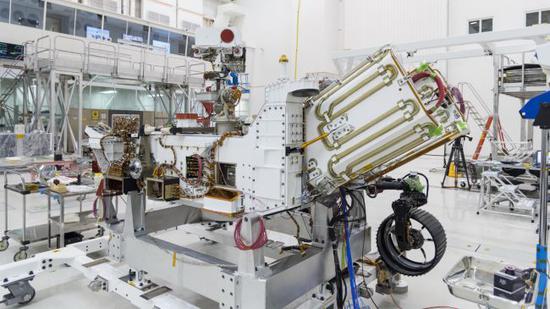 Illustration: The power system of the Mars 2020 Mars Rover is called the Multitasking Radioisotope Thermoelectric Generator (MMRTG) and will be installed between the white panel and the gold pipe at the rear of the Mars.

The last major instrument delivered to JPL was a complex sensor system, the SuperCam, which included a camera, laser generator and spectrometer to cut Mars rock from a distance of 6 meters and measure its chemical and mineral composition. This system recognizes the organic molecules in it.

Developed by an international team of researchers including US, French and Spanish, SuperCam is an upgraded version of NASA's Curiosity ChemCam chemical detection instrument.

Wallace said: "French partners have put a lot of effort into the development of SuperCam. In the past six months, they have been on schedule and doing things around the clock. PIXL and SHELOOC are in the past few weeks. Delivered, installed at the end of the arm. All scientific instruments on the surface of the rover have been installed."

PIXL is an abbreviation for X-ray rock chemical composition planetary instrumentation, which measures the chemical elements present in Martian rocks and soil. The SHELOOC comes with an organic laser and spectrometer for detecting organic matter and minerals on the surface of Mars, and the device comes with an environmental camera. 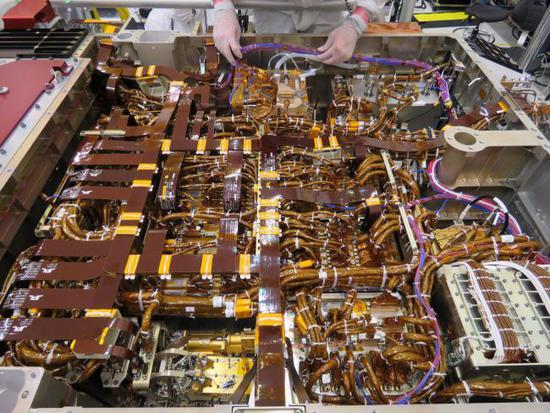 Illustration: This photo was taken on June 1st and was assembled by an JPL engineer at the Mars 2020 Mars in Pasadena, California.

JPL engineers installed the turret of the robotic arm on July 11. The turret is 40 kilograms in weight and contains PIXL and SHERLOC instruments as well as multiple cameras. The turret is also equipped with impact drills and coring equipment to collect rock samples that will eventually be brought back to Earth.

The engineering team started the motion test of the robot arm on July 19, and the whole system operated smoothly.

There are two other instruments on the Mars 2020 Mars. MOXIE will demonstrate the process of carbon dioxide production in the atmosphere of Mars, and the ground penetrating radar developed by Norway will study the geological formation beneath the surface of Mars.

The last major assembly project on the Mars is a complex device for sorting, transferring and storing rock samples, allowing future unmanned Mars exploration missions to send samples back to Earth.

Sample Cache System This complex set of equipment has 17 independent motors, a roller that holds 9 drill bits, and 43 bushings for sealing samples from the Mars core.

Wallace said: "The most important thing (to be assembled) is what we call the storage system. This mechanism is located at the front of the rover. They are hidden inside the rover, when we use the drill bit at the top of the arm. Once the core sample is removed, it is transferred to the conveyor at the front of the rover and finally sealed and stored in the casing."

The part of the storage system inside the Rover is called the adaptive cache component and consists of only more than 3,000 components. Wallace said: "There is a small robotic arm that is responsible for the operation of the core, and a hardware for sealing and inspection of the casing."

After the core sample collection is completed, the Mars 2020 Mars will leave some of the casing containing the sample on the storage point on Mars for subsequent missions to bring it back to Earth.

JPL will also install the Mars helicopter on the abdomen of the Mars 2020 Mars, which will be the first ever to fly over the atmosphere of another planet.

"There are helicopters," Wallace added. "The helicopter (soon) will be assembled. It is located below the rover."

This fall, engineers will conduct a series of tests on the Mars. The first is to connect the probe car to the descent phase for vibration testing. The fall phase of the Mars 2020 Mars uses the same type of landing system that sent the Curiosity Mars to Mars.

"We are making progress in all areas, including the completion of the cruise phase leading us to Mars and the landing system that slowly landed us on the surface of Mars," said John McNano (ohn McNamee), JPL Mars 2020 mission manager.

The rover will then be separated from the descent phase and subjected to a thermal vacuum test to test the ability of the rover to adapt to the low temperature and low pressure of Mars. Wallace said they also plan to test the electromagnetic properties of the Mars 2020 Mars.

The insulation that protects the rover from entering the Martian atmosphere will also be transported to the launch site by the end of this year from Lockhid Martin, Colorado, Wallace said.

After the rover, the descent phase and the cruise phase are all in place, the ground team will assemble the entire spacecraft onto the Atlas 5 rocket and connect to the rover's nuclear power source before the start of the 20-day main launch period. .

Earlier this month, NASA approved the use of 钚238 to fuel the Mars 2020 Mars. 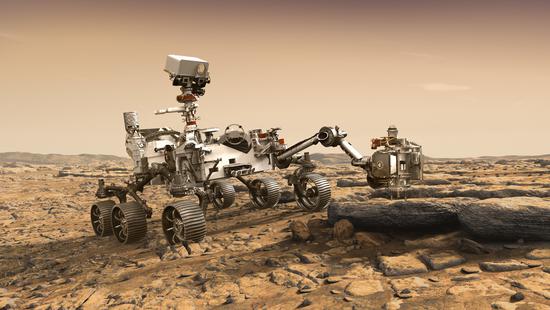 It is possible to launch spacecraft directly from Earth to Mars every 26 months, and next year's launch will begin on July 17.

According to the latest analysis, the launch window on July 17 will open at 9 am EST, and the daily launch window will be between 1 and 2 hours until August 5th. 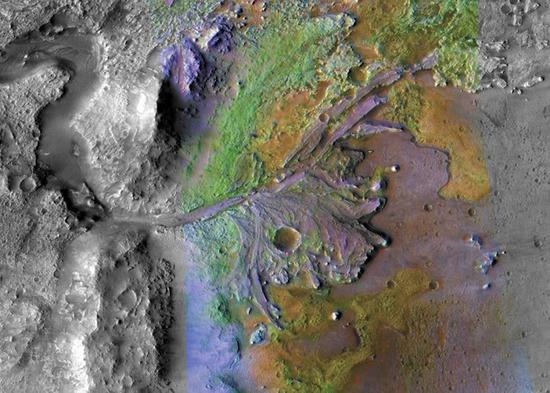 Illustration: Mars 2020 Mars Rover is about to land in the Jay Zero Crater

The Mars 2020 Mars Rover plans to land on the 45-kilometer Jezero crater. Scientists believe that between 3.5 and 3.9 billion years ago, there was an ancient delta and lake in the Jay crater.

Related news
NASA begins to fuel the nuclear power plant of the Mars 2020 Mars
What is the Mars 2020 Mars Rover? Go to the NASA assembly room and have a look.
NASA Engineers Install Sample Cache System on Mars 2020
NASA completes separation of Mars 2020 landing platform
NASA Mars 2020 probe completes the first "stand up"
NASA plans to collect Martian soil samples and bring them back to earth through the Mars 2020 mission
NASA showcases a new generation of supercam cameras to be used in Mars 2020
NASA is finally going to unveil the official name of Mars 2020
Hot news this week
Tencent Music rose more than 3%, and its average monthly revenue of more than 10,000 musicians in 2021 doubled, and NFT will generate revenue for musicians
China Telecom and Huawei jointly released "Super Time Frequency Fold" 5G Determine Network wireless key technology
CNKI is a wholly foreign-owned enterprise? A-share listed company Tongfang shares responded in this way...
Apple has increased incentives in China to up to 15,000 yuan after cutting the trade-in price in the US
Washing your nose with salt Water may Prevent COVID-19, experts warn
"Tmall responds to over 300 minus 50" to the hot search, netizens: Don't engage in Olympiad, less routine more sincerity
Gree Electric has nothing to do with Gree Real Estate! Dong Mingzhu reiterated that he did not do finance and real estate
Xiang responded to Tesla's lawsuit by saying he was dissatisfied with tesla's arrogant attitude but not defamatory
Microsoft has launched an adaptive mouse for people with disabilities that can be assembled as many parts as they want
After the release of the 2999 yuan new machine, it instantly became the hottest model in the headlines: dominating the list all night
The most popular news this week
The domestic screens are rolled to the 2K screen. Why don't Apple follow the roll?
Experts remind: Do not put disinfection pieces to the sewer, it is useless and harmful to disinfection outdoor outdoor disinfection
Flying Pig's new "Yunyou Museum" can watch the live broadcast of nearly 20 museums in China
DEEPMIND training more than 600 tasks such as chatting, playing games, and accumulating wood
4K display uses 240Hz for the first time! Samsung's new flagship display is coming
Accidentally found a new track! AMD Rayon 7 6800U batch arrived
Better iPhone signal! Apple has released a new official version of iOS
iPhone security big overturn, built-in chip low-power operation, after shutdown can still be tracked location
Hong Kong stocks popular technology stocks rose sharply: JD.com rose more than 9% Ali rose more than 8%
Yu Minhong: Strive to open source while reducing costs quickly, or New Oriental will die