DRAMeXchange, a semiconductor research center of Jibang Technology, today released the global DRAM memory market report for the Q2 quarter of 2019, saying that the total output value of the global memory industry in the Q2 quarter was only $14.844 billion, down 9.1% from the $163.32 billion in the Q1 quarter.

The main reason for the decline in memory market revenue is the Q2 quarterly memory price decline. DRAMeXchange pointed out that in addition to the decline in mobile memory, the standard falls.serverThe price of both consumer and consumer memory fell by about 30%. The server-level memory price plunged 35% due to the most severe inventory. Therefore, even with the large price drop, even the total output of the manufacturer is still growing, but the total output value is still It fell by 9.1%.

Recently, the Korean-Japanese dispute has provoked South Korea.SamsungSK Hynix may be forced to reduce memory capacity rumors, memory spot prices rebounded in July, but DRAMeXchange pointed out that the spot size is too small, accounting for 90% of the contract memory, the current inventory is still high, terminal demand remains Weak, so the memory contract price continued to fall in July. 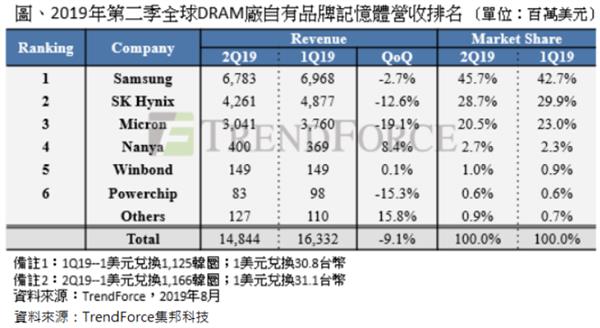 In the specific memory vendor rankings, Samsung Q2 still ranked first with $6.783 billion in revenue. During the quarter, Samsung’s memory capacity increased by 15%, but due to price drag, total revenue remained. The chain fell by 2.7%, but the market share increased from 42.7% in Q2 to 45.7%, an increase of 3 percentage points.

SK hynix ranked second with a revenue of 4.261 billion US dollars, down 12.6% from the previous month.

Micron is still the third in the world. Q2 quarter revenue was 3.041 billion US dollars, down 19.1% from the previous quarter. It is the most obvious decline among the three major companies. In addition to the large environmental factors of memory price decline, Micron is a US company. The impact of US trade volatility is more serious,HuaweiThe outage event will also affect Micron's revenue.