1. What are the new features of the ten generations of Core Rui?

First of all, the most intuitive is the trademark change, i3, i5, i7 LOGO re-change, are more flat, and the first time into gray without color, and the sharp torch Iris Plus core graphics card set up a new LOGO, which will appear in the form of stickers on the ten-generation Core notebook. 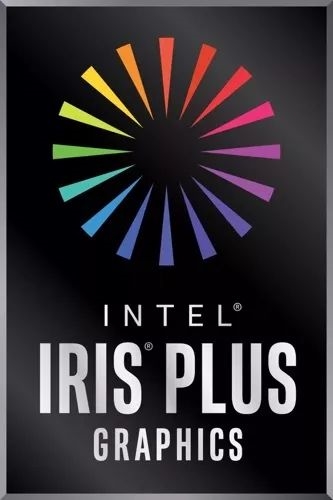 The new features are mainly European:

For the first time, AI has been introduced to PC on a large scale. The version of Iris Plus can achieve 2.5 times faster AI performance.

Integrated Lightning 3 support. Based on ten generations of Core computers, it can support up to four native lightning 3 interfaces.

-support for the latest generation of Intel Wi-Fi 6 (Gig) wireless networks, up to three times faster.

2. Where can the 10-generation Core New Products be used?

The first 11 products released at present are designed for fashionable and beautiful light-weight notebooks and two-in-one notebooks, which enable mobile products to have outstanding AI performance, entertainment function and connectivity, satisfy content creators and entertainment enthusiasts in terms of performance, and meet stringent requirements for volume and weight in terms of portability. Users. 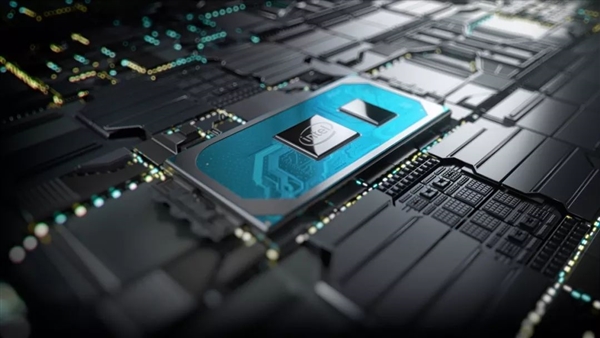 3. What kinds of models can we choose from?

Intel has released 11 10-generation Core processors, covering Core i3, i5 and i7, including 6 U-series and 5 Y-series. They support up to 4 cores and 8 threads. The highest single-core Core frequency is 4.1 GHz, and the highest graphics card frequency is 1.1 GHz. 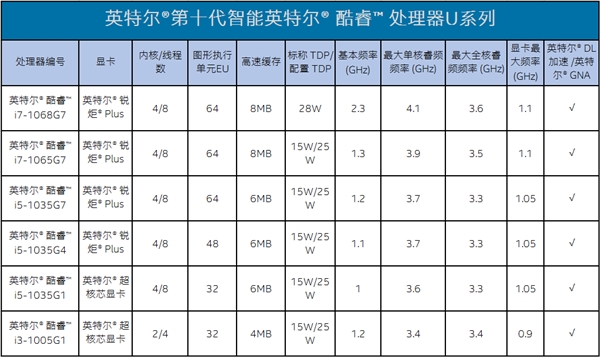 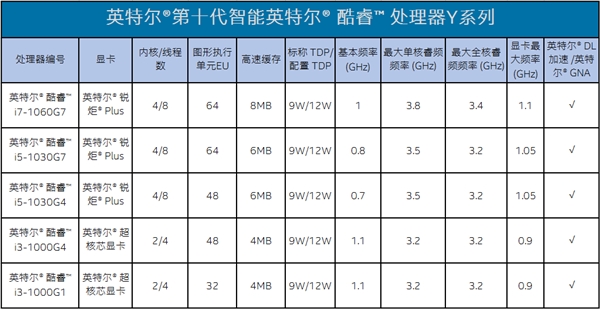 Why is TDP 15W/25W or 9W/12W? This is also the new change of the ten generations of Core, that isConfigurable TDP, in addition to the nominal TDP, there is also a TDP that can be adjusted according to heat dissipation capacity and usage scenario configuration.

4. How can we understand the naming rules of ten generations at a glance?

As you can clearly see, the 10-generation Core introduced a new processor numbering and naming structure. It may seem inappropriate, but once you understand this set of rules, you can basically easily identify the processor model.

5. What is Iris Plus? Will it bring a performance leap?

Let's start with a set of features:

-Iris Plus was the first nuclear display with a performance of 1 Teraflop, and the performance almost doubled.

The encoding ability of HEVC (H.265) is twice as high.

These characteristics meanIris Plus can run mainstream 3D games smoothly at 1080p resolutionFor example, Field 5, another 4K video editing, fast application of video filters and high-resolution photo processing will also benefit. Support for VESA adaptive synchronization gives better fluency to games such as Dust Rally 2.0, Fortress Night and so on.

6. It sounds great to add AI to notebooks, but what are the benefits?

When it comes to apps, the benefits of adding a laptop to AI are obvious, and that is to really make your computer "smart." For the time being,AI can be widely used in automatic image enhancement, photo indexing, realistic sound effect, voice control and other application scenarios.

Take automatic image enhancement as an example, since then your computer can AI automatic repair of graphics, such as low-resolution photos can be automatically repaired into high-definition photos, or, for example, during fitness, the computer can monitor the standardization of various actions through image analysis.

These applications are just the tip of the iceberg for AI applications. With the development process, AI will further change the computer experience.

Use AI to monitor the standardization of fitness movements through cameras.

Ten generations of Core Rui also have special support on AI voice. A simple example is that a user can wake up a computer by saying a word and instruct the computer to achieve more functions and actions. Through GNA special engine, it can run backstage loads such as voice processing and noise suppression with very low power consumption, thus maximizing battery life.

What are the changes in the support of 7, 10 generations of Core on the interface? What is the relationship between Lightning 3 and USB 4.0?

Whether it's Lightning 3 or USB 4.0, in fact,Both of them adopt the USB Type-C interface. They share the same underlying protocol and are complementary and compatible. 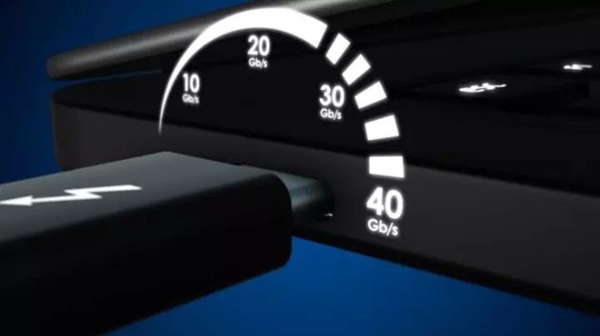 8. what has changed in the support of Wi-Fi?

Wi-Fi 6 is well understood, but not all people named Wi-Fi 6 have the same performance. Intel Wi-Fi 6 (Gig), is supported on 10-generation Core based computersIt uses 160MHz channels to achieve real Gigabit speeds, twice as fast as the mainstream Wi-Fi 6 solution. 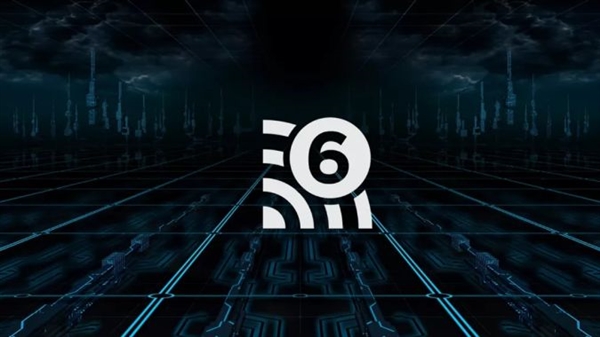 9. Ten generations of Core will accelerate the landing of Athena's plan?

Readers who have seen Athena's plan vision video are probably impressed by the scene shown in it.

PC manufacturers will launch the first systems on Christmas sales day, and laptops that meet the "Project Athena" standard are coming!

10. What new news will the ten generations of Core Rui have in the future?

This release is just the beginning. Intel will launch more 10th generation Core processor family products.More details will be released at the end of this month. 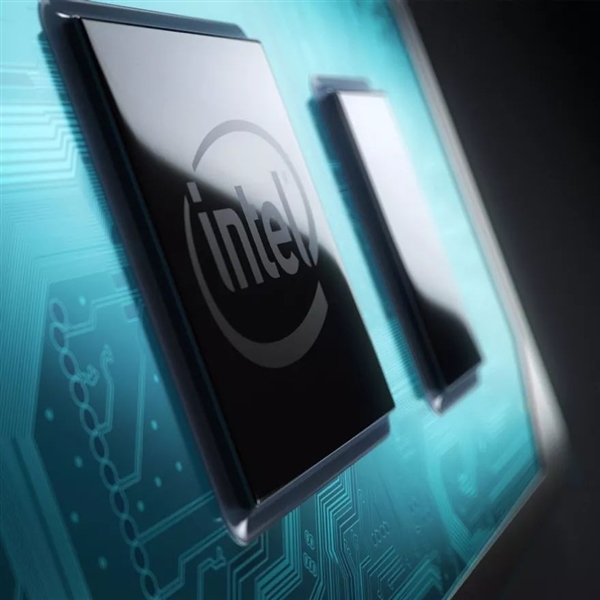 Related news
Science "persuasive retreat": reading Bo pressure mountain, it is time to drop out of school
Chinese scientists protest against the scientific research environment in the United States. "Poisonous," Nature and Science speak out!
AI has captured many people and has re-entered Science, training costs $150, and wins 1,000 knives per hour.
Google quantum computing breaks through science cover! The first quantum simulation of chemical reactions was carried out
Hot news this week
Tencent Music rose more than 3%, and its average monthly revenue of more than 10,000 musicians in 2021 doubled, and NFT will generate revenue for musicians
China Telecom and Huawei jointly released "Super Time Frequency Fold" 5G Determine Network wireless key technology
CNKI is a wholly foreign-owned enterprise? A-share listed company Tongfang shares responded in this way...
Apple has increased incentives in China to up to 15,000 yuan after cutting the trade-in price in the US
Washing your nose with salt Water may Prevent COVID-19, experts warn
"Tmall responds to over 300 minus 50" to the hot search, netizens: Don't engage in Olympiad, less routine more sincerity
Gree Electric has nothing to do with Gree Real Estate! Dong Mingzhu reiterated that he did not do finance and real estate
Xiang responded to Tesla's lawsuit by saying he was dissatisfied with tesla's arrogant attitude but not defamatory
Microsoft has launched an adaptive mouse for people with disabilities that can be assembled as many parts as they want
After the release of the 2999 yuan new machine, it instantly became the hottest model in the headlines: dominating the list all night
The most popular news this week
The domestic screens are rolled to the 2K screen. Why don't Apple follow the roll?
Experts remind: Do not put disinfection pieces to the sewer, it is useless and harmful to disinfection outdoor outdoor disinfection
Flying Pig's new "Yunyou Museum" can watch the live broadcast of nearly 20 museums in China
DEEPMIND training more than 600 tasks such as chatting, playing games, and accumulating wood
4K display uses 240Hz for the first time! Samsung's new flagship display is coming
Accidentally found a new track! AMD Rayon 7 6800U batch arrived
Better iPhone signal! Apple has released a new official version of iOS
iPhone security big overturn, built-in chip low-power operation, after shutdown can still be tracked location
Hong Kong stocks popular technology stocks rose sharply: JD.com rose more than 9% Ali rose more than 8%
Yu Minhong: Strive to open source while reducing costs quickly, or New Oriental will die