Hongmeng OS Warehouse will be listed on GitHub's top mobile phone by the end of the year.

According to the English version of Global Times, Huawei will launch low-end intelligence equipped with Hongmeng system by the end of this year.Mobile phoneThe price is 2,000 yuan. According to Blue Whale TMT, informed sources of information, Huawei's internal smartphone shipment target this year is 270 million.

On the other hand, a repository called Awesome-HarmonyOS appeared quietly on GitHub. From the repository account information, you can see that the account was registered 4 days ago, and it was very active recently. The first repo was uploaded on the 9th. More than 30 commits have been submitted so far. In just 3 days, he won more than 3,000 stars and continued to occupy the GitHub Japan Championship.

This account only focuses on the harmonyos account. The harmonyos os was registered on July 14 and there is no activity.

Compare the names of the two accounts: harmonyos vs Awesome-HarmonyOS, and the updated content. Guess that the future may update all the related content of the Vision OS under the Awesome-HarmonyOS account, including publishing updates, source files, documents, etc. .

Although the account does not clearly indicate whether Huawei is officially registered, it seems that the most comprehensive and up-to-date information about Hongmeng is here.

Huawei started mobile phone testing this year, all OS-related security information,TutorialThe documentation should all be in preparation. At present, there is no official source code or ISO release from Hongmeng OS. If you download the so-called "Hongmeng OS" file from a third-party channel, remember to check the security of the file.

The warehouse allows us to have a very clear understanding of the Hongmeng OS roadmap. Next, students who want to experience Hongmeng OS are looking at this repo, pull at any time, pay close attention to the commit, and strive for the first time to experience.

However, Hongmeng's architecture reference comes from LiteOS, so you can also use LiteOS as a substitute to experience it. 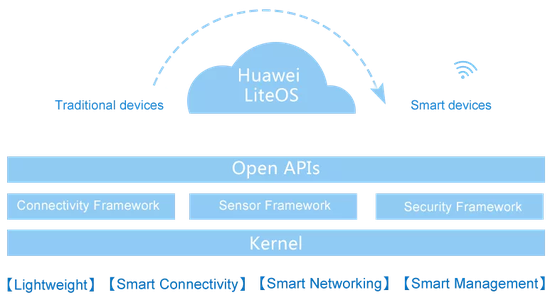 Let's take a look at what resources Awesome-HarmonyOS has now.

I. Introduction to Hongmeng System

HarmonyOS is the first full-distributed distributed OS based on microkernel. It is an operating system independently developed by Huawei. On August 9, 2019, Hongmeng System was officially released at the Huawei Developer Conference <HDC.2019>. Huawei will be the first to deploy on smart screens, car terminals, wearables and other smart terminals. More and more smart will be in the future. The device uses the open source Hongmeng OS.

The original design of Hongmeng OS is to meet the high standard connection requirements of the full scene smart experience. For this reason, Huawei has proposed four system solutions.

1. Distributed architecture is used for terminal OS for the first time to achieve seamless collaborative experience across terminals.

2. Determine the delay engine and high-performance IPC technology to achieve a natural and smooth system

Hongmeng OS solves the problem of insufficient performance of existing systems by using two techniques: determining the delay engine and high-performance IPC. It is determined that the delay engine can allocate the task execution priority and time limit in the system before the task is executed, and the task resources with higher priority will be preferentially guaranteed to be scheduled, and the application response delay is reduced by 25.7%. The compact nature of the Hongmeng microkernel enables IPC (interprocess communication) performance to be greatly improved, and the process communication efficiency is increased by 5 times compared with the existing system.

Hongmeng OS adopts a new micro-core design with stronger security features and low latency. The basic idea of ​​microkernel design is to simplify kernel functions, implement user services as much as possible outside the kernel, and add security protection to each other. The microkernel only provides the most basic services, such as multi-process scheduling and multi-process communication.

Hongmeng OS applies microkernel technology to the Trusted Execution Environment (TEE) to reshape trusted security through formal methods. The formal method is an effective means of verifying the correct and flawless system from the source by using mathematical methods. Traditional verification methods such as functional verification, simulated attacks, etc. can only be verified in selected limited scenarios, while formal methods can verify all software running paths through the data model. For the first time, Hongmeng OS used the formal method for terminal TEE, which significantly improved the security level. At the same time, because the code of the Hongmeng OS microkernel is only one thousandth of the Linux macro kernel, its attack probability is also greatly reduced.

Hongmeng OS develops IDE with multi-terminal, multi-language unified compilation, distributed architecture Kit provides screen layout control and automatic adaptation of interaction, supports control drag and drop, and visual programming for preview, so that developers can build multi-end efficiently based on the same project. Automatically run the App to achieve a true development, multi-end deployment, and a shared ecosystem across devices. Huawei's Ark compiler is the first to replace Androidvirtual machineA static compiler for schemas that allows developers to compile high-level languages ​​into machine code at once in a development environment. In addition, the Ark compiler will support multi-language unified compilation in the future, which can greatly improve development efficiency.

[Publishing information] (to be improved)

[Safety Information] (to be improved)

[Getting Started Guide] (to be improved)

[Official Document] (To be improved)

[Mirror] (to be improved)

[Device compatibility] (to be improved)

[Standards & Protocols] (to be improved)

[Hareware Quality Specification] (to be improved)

[Driver Development Kit] (to be improved)

[Driver Samples] (to be improved)

[Debugging Tools] (to be improved)

[Security] (to be improved)

[5th ​​Gen Drivers and Firmware] (to be improved)

[Boot and UEFI] (to be improved)

[Printer] (to be improved)

[Ark] Hong Meng is an operating system compatible with Android applications. The ARK compiler can improve the fluency of Android system operation by 24%, response speed by 44%, and the fluency of third-party applications by up to 60%.

[Video explanation] (to be improved)

Screenshot of QA for everyone to forward friends circle

Related news
Hongmeng OS Warehouse will be listed on GitHub's top mobile phone by the end of the year.
Huawei Ark Compiler Officially Open Source Separated from GitHub to Realize Autonomous Hosting
What does Hongmeng OS, which is not used for smart phones, mean for Huawei?
GitHub completes Arctic source code Archive
GitHub will replace the term "master" with "main" from next month
Learn about Huawei Hongmeng OS 2.0 series beta 2: Android goodbye
Wang Chenglu: Huawei mobile upgrades Hongmeng OS at the end of June
Hot news this week
Templates for creating new Twitter in the future? Musk's praise of WeChat has triggered a heated discussion on the whole network
Tencent Music's TME live will re-screen Jay Chou's concert on may 20 and 21
Sony's new LinkBuds S headset parameter exposure: only 4.8 grams of comprehensive battery life 20 hours
Weak demand in the mobile market! Domestic shipments of mobile phones fell 40.5% in March to a two-year low
Henan 4 village bank line cannot withdraw cash? CBRC responds! The public security organs have registered an investigation
Baidu: In 2021, an average of 56 billion malicious information of all kinds will be intercepted every year
"Chinese version of LV" is re -executed 680 million! Reporting the property clues of the chairman, up to 8.66 million yuan
Still did it! Canada has banned Huawei and ZTE from participating in the country's 5G network on "national security" grounds
Pig companies continue to increase technology, just launched the smart pig farm, another 100 million to set up a technology company
The Jingdong Express bulk order sent to Shanghai across the country is completely static? JD.com: Not true No such information has been published
The most popular news this week
The domestic screens are rolled to the 2K screen. Why don't Apple follow the roll?
Apple spends a lot of money to build dinosaurs! Prehistoric Planet trailer released: Airs on Monday
The country line had dropped nearly 2K no one to buy! Apple's most non-existent new version of the new revealed helpless
The average price of AMD graphics cards is infinitely close to the original price NVIDIA still has a long way to go
B station was exposed to layoffs: involving games, overseas business, OGV and other departments
Continuous business adjustment? Ali has been exposed to many sectors layoffs, and the scale of spring recruitment has shrunk sharply
Exposure of Tencent's game business or layoff 10 %: CSIG business group has previously layoffs 15 %
Meizu 19 series coming? Meizu mobile phone appearance patent disclosure: the return of secondary screen
Jingdong crowdfunding 10000mAh mobile power supply: with Apple Lightning and Type-c dual wires
Mobile phone chip CPU energy efficiency ranking: it is comparable to A14