After operating independently, Redmi has been working in multiple areas.Mobile phoneRedmi Note 7 redefines the configuration of the thousand yuan machine, the flagship machine Redmi K20 Pro is comparable to Xiaomi 9; Redmi also launchedwashing machineAnd products such as laptops. 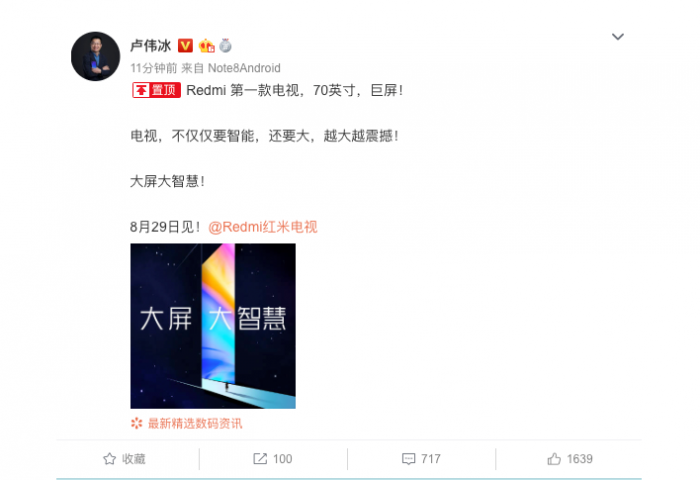 About RedmiTVThe rumors finally ushered in a real hammer. Today (August 19, 2019), Xiao Wei, vice president of Xiaomi Group and general manager of Redmi, said on Weibo that on August 29, Redmi will launch the first TV. The screen size is 70 inches. He said in Weibo, "Television, not only to be smart, but also to be bigger, the bigger the more shocking!"

According to the news, Redmi TVs are available in two sizes, 40 inches and 70 inches, respectively.4KResolution, where the 40-inch version may sell for less than $1,000.

In fact, Redmi has already had various hints and indications about the news of TV.

On June 12 this year, when forwarding the record of Xiaomi TV in India, Lu Weibing asked tentatively, “Do you want Redmi TV?”; when Xiaomi TV won the first place in the country, Lu Weibing once again on Weibo Ask everyone's opinion, "Do Redmi want to do TV?" Just a few days ago, Li Xiaoshuang, the principal person in charge of Xiaomi TV, and Lu Weibing met and said, "Friends are quite powerful and should be taken seriously." 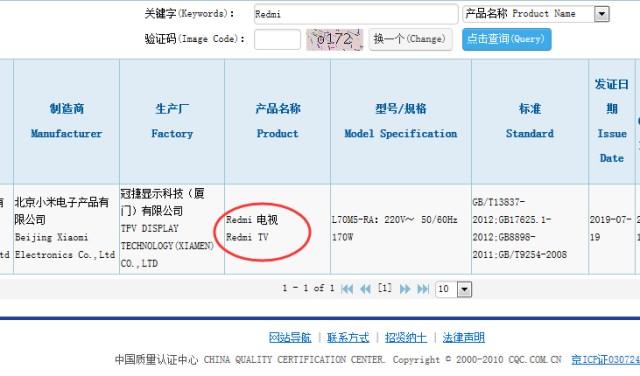 Previously, netizens also found that Redmi TV has appeared on the website of the National Quality Certification Center. The product certification certificate shows that the Redmi TV is issued on July 19th. The product model is L70M5-RA, which is produced by TPV (AOC) Display Technology (Xiamen) Co., Ltd. The company's OEM production is expected to be available for sale as soon as possible in September this year.

Recently, RedmiRed riceThe official TV microblog has also been officially launched through the audit, but Weibo has not yet been released.

It's not hard to know from this series of actions that Redmi started to lay out the categories outside the mobile phone long ago, trying to build their own ecosystem.

And Xiaomi is also an "enemy" friend

As early as 2013, Xiaomi released the first generation of smart TV; in this respect, Xiaomi does have rich experience and strong strength - in the first quarter of 2019, Xiaomi TV shipped 2.354 million units nationwide. In the first half of 2019, the sales of Xiaomi TV ranked first in the country, becoming the only TV brand with a semi-annual shipment and sales volume exceeding 4 million.

Even if Redmi has left Xiaomi to become an independent brand, there are still many netizens speculating about Redmi's TV launch. "Redmi TV will pick up the low-end market and Xiaomi TV will make a big screen and high quality." 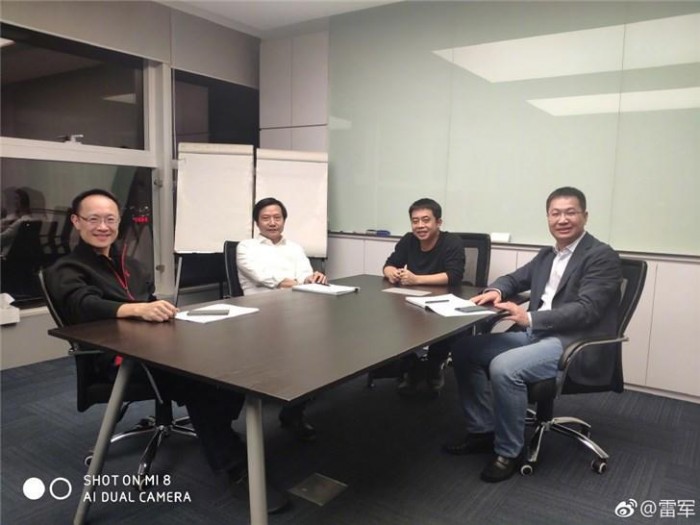 The picture above shows the photo of Lei Jun, Lin Bin, Li Wanqiang and Lu Weibing.

As Lei Jun once said, the millet and the red rice are separated and developed in different directions to make the millet brand better; Redmi focuses on the most cost-effective, and Xiaomi focuses on high-end and new retail. However, if the millet brand wants to enter the high-end market, it must get rid of the stereotype of “price-performance ratio” and leave the low-end market (the price of Xiaomi 55-inch TV is already less than 2,000 yuan). The vacancy after Xiaomi’s exit from the low-end market is filled by Redmi, which has the best price/performance ratio.

However, some netizens believe that "it should not be a high-end one to rush to the lower end, because one end is equal to voluntarily giving up the other end; if the relay is not connected, the gear may be eaten by others." 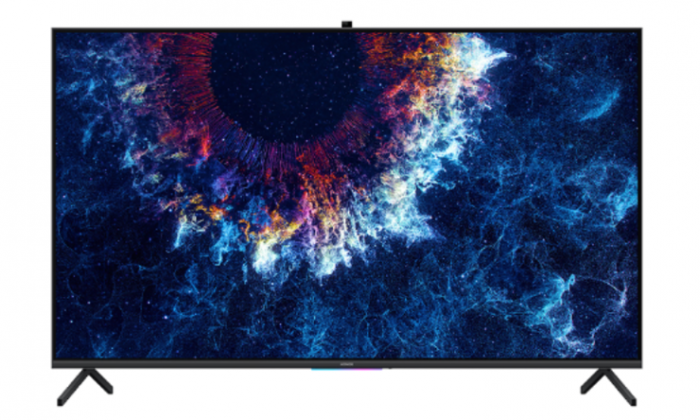 The picture above shows the picture of Huawei's official website about the glory wisdom screen.

Today, glory has entered the field of television. On August 10 this year, Huawei's brand glory released the glory wisdom screen, which is the first device equipped with Hongmeng OS. At the same time, it is equipped with Haisihong 818 smart chip and cooperation. The HiSilicon NPU chip of the AI ​​lifting camera and the HiSID Hi1103 WI-FI chip. Huawei also said that it will launch a smart screen.

This may bring pressure to Xiaomi TV to a certain extent.

In addition, due to brand considerations, glory was independent from Huawei in 2014. Since then, Huawei has benchmarked in the high-end market.SamsungwithappleFor other manufacturers, the low-end market is handed over to glory for collaboration.

Xiaomi also has the consideration of learning from Huawei and glory. At present, Xiaomi TV has begun to develop into high-end, such as full-screen TV and mural TV; among them, the price of mural TV is as high as 7,000 yuan. In the increasingly competitive battlefield of TV, Xiaomi needs Redmi to be the most cost-effective brand to fill the gap.

In recent years, the TV field has gradually become a competition place for mobile phone manufacturers. A large part of this is due to the saturation of the smart phone market. In addition, with the advent of the 5G era, IoT/AIoT will become the trend of the times, and it will become more important to enter the big screen field. A big grasp occupies the entrance of the smart home.

However, even Xiaomi, who has been in the TV field for six years, faces many new challenges; and Redmi's final results, I believe time will give an answer.