Baidu Q2 reversed the loss situation in the previous quarter, but the decline in net profit is still in the painful period 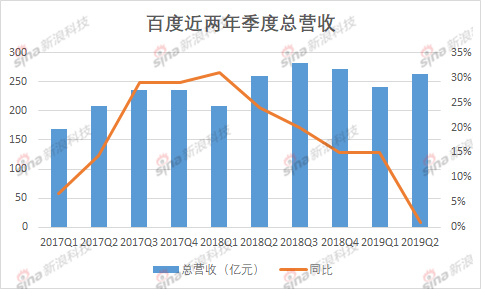 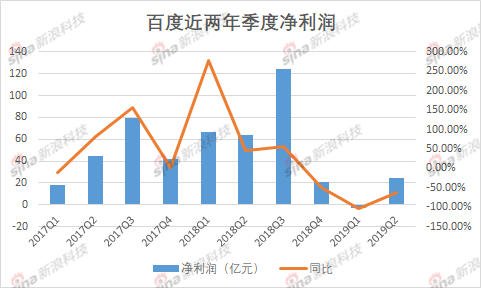 After the release of the earnings report, Baidu Chairman and CEO Li Yanhong said in an internal letter to all employees that “this time, faced with severe external challenges and a weak macro environment, the company promoted a series of subversive changes from top to bottom, involving organizations. Architecture, personnel changes, business consolidation, etc. These changes will bring phased pains, and will have a positive and far-reaching impact, making Baidu more stable and farther."

Compared with the previous quarter's bleak performance, Baidu's quarterly earnings performance was outstanding. In the first quarter of 2019, Baidu ushered in its first quarterly loss since its listing in 2005, leading to a pessimistic outlook for the second quarter.

However, from the specific data point of view, as well as compared with the same period last year, Baidu's performance is still weak, "water reverse period" has not completely ended.

As of press time, Baidu's market value is 36.128 billion US dollars. Currently, it ranks fifth in the market value of listed Internet companies in China. The top four are Ali, Tencent, and the US group.Jingdong. Baidu’s market value at the peak of the year reached $99 billion.

On the road to change, Baidu has a long way to go.

Medical revenue is still negative growth. Li Yanhong: It is a good thing.

According to Baidu's second-quarter earnings report, in terms of revenue, network marketing revenue in the second quarter was 19.2 billion yuan, down 9% year-on-year, up 9% from the previous quarter; other revenues were 7.1 billion yuan, up 44% year-on-year. Mainly due to the iQiyi membership service,cloud serviceAnd the smart device business is growing strongly.

In the conference call, Baidu CFO Yu Zhengxi said that the largest contribution to the company's advertising revenue is the medical and health industry, and other industries account for a relatively small proportion.

However, Li Yanhong mentioned that the medical industry's revenue has experienced double-digit negative growth. Compared with last year's figures, the medical revenue in the second quarter accounted for less than one-seventh of Baidu's core revenue. "But I think this It's a good thing for us because we have a better way to improve the quality of the content through the landing page and to monitor the communication between advertisers and users."

In addition, Baidu Vice President Shen Xiao revealed in a conference call that Baidu’s number of advertisers in the medical industry continued to fall from the beginning of the second quarter to the second quarter. It is reported that Baidu regulates customers through smart small programs and management pages, so that it can use AI to review and filter systems, supervise communication between advertisers and users, and ensure information security. On the other hand, it also filters out some non-compliant advertisements. client.

In a conference call, Li Yanhong said that the main contribution to traffic growth is retail, e-commerce,educationAs well as the service industry, this is the highlight industry in the second quarter.

Power mobile to the service platform

Entering the mobile era, Baidu's advantage is no longer as strong as the PC side in the past, and it is affected by all parties. Baidu has made the mobile content and service ecology a key part of this year. For example, the "search + information flow" dual-engine strategy is proposed, and the content ecology is established through the Baijia number and Baidu applet, as well as the investment layout.

Shen Xiao said in the conference call that the content producers of Baijiahao increased year-on-year, and now it has reached 2.2 million, but this is not enough, because users use Baidu for the purpose of service, while Baidu applet is used. Provide a variety of services.

In addition to its own content system Baijiahao and Baidu small programs, Baidu is also seeking other content that can cooperate and expand the types of services. For example, investment has brought more information and support to Baidu.

Since the beginning of this year, Baidu has increased the investment layout of content, such as investing in Kai Shu storytelling, fruit shell network, knowing and other content companies.

An obvious trend is that Baidu is shifting its thinking from a technology model to a service-oriented model.

Li Yanhong said in an internal letter that search is the foundation of Baidu and the core value of Baidu. In the past 20 years, Baidu search has continued to invest in core technologies to create competitive barriers. Now, it has evolved into intelligent search and has broken through restrictions.Mobile phoneExtend to smart speakers, smart cars and other scenes.

"Based on a solid search base, Baidu is building an unprecedentedly prosperous mobile ecosystem." Li Yanhong said.

Yu Zhengyi also said in a conference call that Baidu is realizing the transition from a technology company to an in-app service delivery platform. He mentioned that technology investment may see results in the current quarter, and channel costs, marketing expenditures and service investment may not appear until several quarters later. In the next year, the company will continue to pay attention to related investments. opportunity.

According to its disclosure, Baidu's content system is divided into three categories, one is knowledge content, such as knowing, Baidu knows; the second is service content; the third is vertical industry content. This part of the content is still fragmented on the Internet. Baidu believes that it can play its own role to aggregate these contents, improve user participation and improve user experience.

Baidu used to invest too much in AI, but the return from AI is still difficult to reflect in a short period of time. At present, Baidu's top challenge is more of a challenge in the mobile search business.

With the pace of byte-hopping layout search speeding up, Baidu's road ahead is not optimistic. In response to an analyst question, Shen Sha said that in the search field, there are new competitors joining the news, the profit of the search business is very good, and new companies have been trying to carry out this business in the past few decades.

But he believes that the search industry has a high barrier to entry, search engines need to find content that meets user needs in hundreds of billions of web pages, and the information stream only provides content that roughly matches the recommendation, without identifying the right or wrong. “It’s relatively simple to go from search to information flow, and vice versa.”

At present, Baidu has been strengthening its defense in the content field, and the mobile ecology is also a major measure to meet the challenges in the search field. In the follow-up, Baidu may speed up integration and aggregate the content ecosystem.