China's mobile phones, such as Millet Ov, swept the Southeast Asian market, with Q2 taking 62% of the market share.

Doan Kim Chi works for a local bank in Hanoi, Vietnam's capital, for many years.IPhoneLoyal users of.

Recently, she received a iPhone XS Max gift from her husband. IPhone XS Max isappleThe most expensive smart model ever launched.cellphoneIn 2005, the retail price was about 8000 yuan.

Doan Kim Chi is very satisfied with her new mobile phone, but she says she also notices that new mobile phones from Chinese brands have become more popular in Vietnam in recent years, and the market is no longer free from it.SamsungAnd Apple and other brands dominate.

The 31-year-old Vietnamese banker said in an interview that "advertisements from companies like OPPO can be seen everywhere [in Hanoi]. They also hired local celebrities to help them promote mobile phones here.

OPPO,VivoandmilletSuch brands are increasingly favored by consumers in Vietnam. These wealthy Chinese smartphone manufacturers have aggressively marched into emerging markets in recent years, adopting the same strategies as they did when expanding their markets at home, such as adopting radical marketing strategies and offering innovative phones at attractive prices.

"OPPOtelevisionAdvertisements will be broadcast in prime time and between movies after news shows. Doan Kim Chi says, "When there's a hot TV show, you always see OPPO ads."

OPPO, vivo and millet have turned their attention to Southeast Asia after China and India, the two largest smartphone markets in the world, have taken a large share of the market. A report released this month by Canalys, an industry research institute, shows that in the second quarter of this year, China accounted for 62% of the total shipments of 30.7 million mobile phones in Asia, up from 50% in the same period last year.

"New brands are very popular in Southeast Asia, where manufacturers are more likely to succeed than the rest of the world." Matthew Xie, an analyst at Canalys, said in the report that "75% of shipments come from models below $200, and Southeast Asia is mainly engaged in Mid-and low-end smartphones, while brand loyalty in this segment is relatively low."

Although Samsung Electronics, the market leader, once declined for three consecutive quarters, it stopped its decline in the second quarter with a 5% growth and a 25% share. It is still the leader in Southeast Asia. OPPO, vivo and millet ranked second, third and fourth respectively. In the second quarter, OPPO achieved its largest ever increase of 49%. 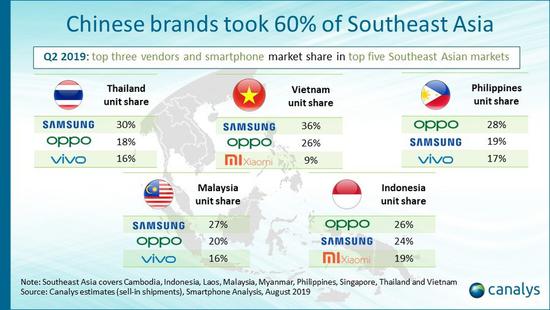 According to Canalys, Realme, a Chinese brand focused on India, ranked among the top five in Southeast Asia for the first time, with 1.6 million smartphones shipped, accounting for 5.2% of the market.

Kierangitkal (Kiranjeet Kaur), senior research manager at IDC in Singapore, said: "they [Chinese smartphone brands] are continuing their journey, not only to bring high value for money to consumers, but also to bring innovative features to market. This includes new charging methods and attractive camera features for consumers. "

In Southeast Asia, OPPO is catching up with Samsung, and millet has replaced it in the second quarter, Canalys said.HUAWEIHuawei is no longer in the top five, occupying the fourth place in the market. Canalys did not list Huawei's shipments and rankings in the report.

According to Canalys, Samsung, OPPO, vivo and millet currently dominate smartphone shipments in Thailand, Vietnam, the Philippines, Malaysia and Indonesia - the top three in all five markets.

"Any gaps left by Huawei will be grabbed by competitors, especially in areas where prices are slightly higher," said IDC's Cole.

Related news
Q2 China Smartphone Scorecard in 2019: OV, Millet, Apple, etc. all declined
Millet Ov swept the Southeast Asian market, Q2 won 62% share
China's mobile phones, such as Millet Ov, swept the Southeast Asian market, with Q2 taking 62% of the market share.
How many overseas markets did Xiaomi ov grab from Huawei's retreat?
Hot news this week
Titanium Media Publish Assesum: People's Bank: Digital RMB Winter Olympics pilot has entered the sprint phase; Tesla announced that 250,000 Powerwall energy storage power stations have been installed
Close to the apple millet, two weeks of consecutive weeks, China Smartphone second: 3 years, the world's first
Alibaba and Tencent have received more than half of the 43 antitrust fines, and lawyers say the penalties are likely to increase
Study on the sequelae of COVID-19 in the Chinese team: Shortness of breath, depression and other problems still existed nearly one year after discharge
Capital does not love SAIC, "flying" subsidiary, Jet Hydrogen Technology intends to go to science and technology board
Huawei redefines one of the three major communication networks of the underground communication network
Tencent responded to "APP to get ridiculous": Upgrade APP is now downloaded for user rights protection
Gree announced the implementation of the double-holiday work system Dong Mingzhu from the media voice netizen God reply
The approval of Sensetime's IPO gives the metasurverse concept another ride
Netease Cloud Music will soon be listed on the back of 200 million monthly live users how to make money
The most popular news this week
Huawei Heavy Machinery is re-incorporated! Generators except logo exactly
Samsung PCIe 4.0 hard drive upgrade: more heat sinks fully support PS5
New crown latest variament has emerged in early November: New York, USA has a bad feeling
Black Friday us stores face embarrassing situation! Got stuck in the neck
Vehicle positioning signal weak puzzle! To be completely solved by Huawei
Apple resumed sales of the iPhone and iPad in the country after an emergency removal, with prices rising by 25%
In the first 10 months of the year, China's software business revenue increased 19.2%
Guangming Daily: Bid farewell to disorderly competition, platform economic development to tighten the bottom line
Can WeChat transfer borrowed money?
Sources say Huawei has begun mass production of a generation of foldable phone price surprise