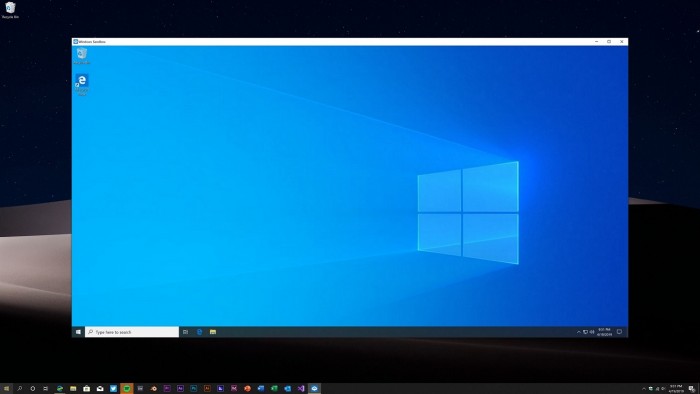 These four questions include:

The Windows Sandbox is a "lightweight virtual environment" and one of the biggest highlights of the Windows 10 1903 update. However, many users are now experiencing problems here. When they try to start it, it always displays an error message, which makes it unusable. 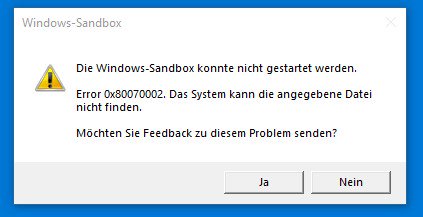 Windows Sandbox may fail to start with "ERROR_FILE_NOT_FOUND (0x80070002)" on devices in which the operating system language is changed during the update process when installing Windows 10, version 1903.

Technicians from the Microsoft support team have stated that this issue affects devices that have changed their operating system language during the Windows Update installation. Today, Microsoft updated its documentation to confirm that it is addressing the issue and estimated that a fix "will be available at the end of August."

Currently, in addition to Windows 10 v1903, Visual Basic application corruption issues on all Windows versions have been fixed.

Unfortunately, the current Windows 10 May 2019 (Version 1903) feature update still has this problem, Microsoft has not been fixed. However, Microsoft stated in the instructions that the relevant solution will be launched before the end of August.

Microsoft announced a block between the use of v15.1.0.1002 and 15.5.2.1053IntelThe Rapid Storage Technology (Intel RST) driver's device is upgraded and the official support documentation states that there is an incompatibility issue.

Microsoft explained: "Intel and Microsoft have found incompatibilities with certain versions of Intel Rapid Storage Technology (Intel RST) drivers and Windows 10 May 2019 updates (Windows 10, version 1903). To protect your update experience, we have A device with an Intel RST driver version installed between 15.1.0.1002 and 15.5.2.1053 initiates a compatibility pause, preventing it from being upgraded to Windows 10 v1903 or Windows Server v1903 until the driver is upgraded to a newer version."

Microsoft explained: "To resolve this issue, you need to update your device's Intel RST driver to 15.5.2.1054 or higher. Please consult your device manufacturer (OEM) to find out if the updated driver is available and install it. ""

For businesses, this month will resolve errors that cause boot failures on devices connected to domains configured to use the MIT Kerberos realm.

Related news
Windows 10 May 2019 Start Menu Improvement Inventory: More Simple and Fashionable (Figure)
Microsoft will block Windows 10 May 2019 updates for these devices
Microsoft Windows 10 May 2019 update officially started to push globally within a few weeks
Windows 10 May 2019 starts full push Manually check for updates to upgrade
Windows 10 May 2019 update causes Sandbox to not work properly (Figure)
Microsoft promises to fix four major problems of Windows 10 May 2019 before the end of the month (Figure)
Windows 10May 2020 information summary: release time, new features, etc .(figure)
Windows 10 may 2020 is expected to meet you next week (Figure)
Get ready: Microsoft starts to push windows 10 may 2020 updates "step by step" this week
Windows 10 may 2020 ready to launch: inventory of major new features (Figure)
Hot news this week
Zhao Lijian responded to the British "blocking" Huawei: generalizing the concept of national security harms others and harms themselves
Zhao lijian said the UK's decision to block Huawei under PRESSURE from the US was damaging others and not benefiting itself
Half a billion! Pay treasure collect five blessing to come: exceed 50 thousand people collect qi have you
Behind Microsoft's acquisition of Blizzard: Intended to build a super game carrier, SONY is the most hurt
Behind the exposed layoffs, China has praised the loss growth, and the stock price has fallen 67% in three months.
Mediatek's 40% share topped the mobile SoC market, leading for six consecutive quarters, followed by Qualcomm and Apple
The largest transaction in Microsoft's history! Hao Zhi 436.1 billion cash acquisition moving blizzard
Microsoft's $68.7 billion acquisition of Activision Blizzard became the largest acquisition in the company's history
Huawei applied for the Tianchi trademark again, and the international classification is scientific instruments and website services
Cait: it is not recommended to take quarantine measures directly for travel card users with asterisks
The most popular news this week
7 years! The classic control panel doesn't die: Windows 11 takes another step back
The most comprehensive summary! Apple will release the most equipment in history this year.
Microsoft forced upgrade Windows 10 20H2: It also uses machine learning
VR/AR global invention patent ranking TOP100: Samsung, Tencent, baidu top 3
Good start! China's software business revenue increased by 17.7% to 9,499.4 billion yuan in 2021
Microsoft Surface Pro 8 pushes the January driver update
How hard does the physics teacher work in class? Dismantle your own iPhone and induction cooker for students to see
Huawei applied for the registration of petal series trademarks
Tencent, China Merchants Port established The Port teng Internet technology company, registered capital of 50 million
Xiaomi applying for a Mibao trademark, international classification is a financial property management