The most authoritative CPU processor and related hardware identification tool CPU-Z has recently been upgraded to version 1.90, which is updated again after more than three months.

The update rate of CPU-Z 1.90 is not very large, but the first one is exciting. It has clearly supported the AMD Ruilong Threader Ripper 3000 series!

According to AMD CEO Su Zifeng, more news about the three generations of tearers will be announced this year, but it may take up to one year to release the listing. After all, on the one hand, the ripper has no rivals in performance, on the other hand, its own specifications. It also achieved an extreme, naturally not eager to update. 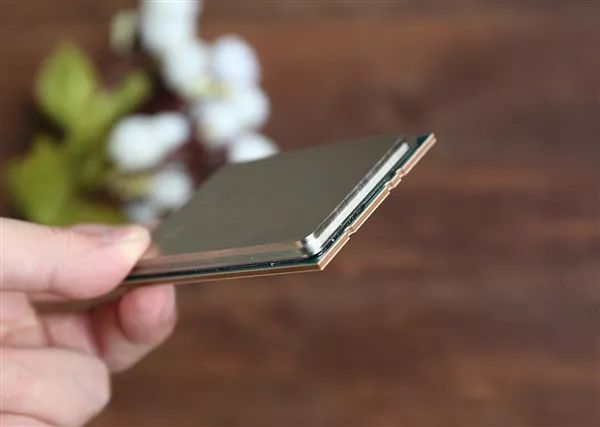 However, there have been more and more exposures about the three generations of tearers. On the one hand, they are constantly appearing in various test software. On the other hand, AMD TRX40, TRX80 and WRX80 are also available in the list of USB-IF official website certification products. The chipset, which has been certified by USB 3.1 10Gbps, is likely to be a new partner for the three generations of tearers.

Guess, the TRX40/TRX80 should replace the X399. The WRX80 is likely to support eight-channel memory and support more PCIe 4.0, specifically for content workstations, namely the Intel C621 and its partner Xeon W-3175X. 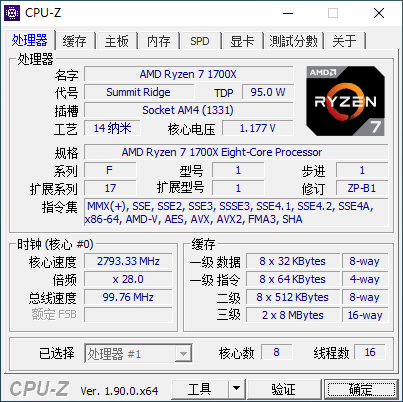 According to AMD CEO Su Zifeng, the third-generation thread tearers that many enthusiasts and content creators are looking forward to will announce new news during the year, but the release time is still a mystery.

Of course, the new Ripper has been advancing in an orderly manner, and GeekBench and UserBenchmark have been showing up with various test software. Today, another new tearer appeared in the UserBenchmark database, which is quite fierce.

The second generation of tearers has a maximum of 32 cores and 64 threads. Now that the Zen 2 architecture of the 7nm process has been released, Snapdragon has done up to 64 cores and 128 threads, but almost certainly, the ripper will not cross the 64 cores in one step.

At present, the three generations of tearers are likely to stay at 32 cores. After all, this is enough for consumer applications, and there are no opponents at all. 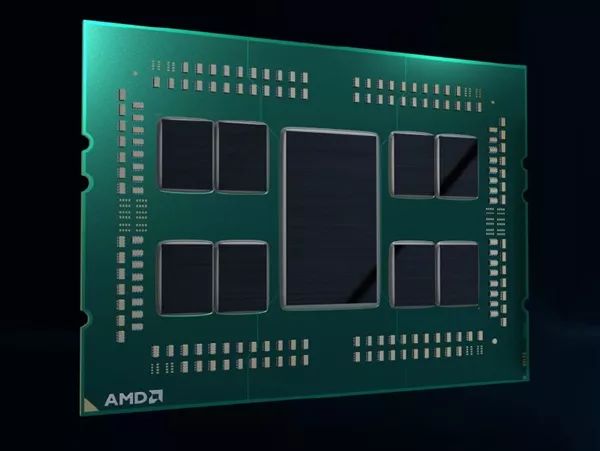 The exposure in UserBenchmark is32 core 64 thread version, the state is still ES1 engineering sample, but the frequency has achieved the benchmark 3.6GHz, the highest acceleration 4.2GHz, the average acceleration frequency in the test is 3.75GHzCompared with the three generations of Ruilong, this is not low, I don't know if the final version will continue to improve.

In this state,64 thread test score is 5649, while the same 32 core 64 thread, 3.0-4.2GHz frequency second generation flagship tearer 2990WX score of 4328 points, which means that the new generation in the case of the same number of core threads, multi-threaded performance Soared by 30.5%!

In contrast, Intel's enthusiast-class Core X series is also preparing for the next generation, but the process architecture is unchanged, at most only slightly increased frequency, and it is likely to be up to 18 core 36 threads & mdash; — how can this be parried … … ; 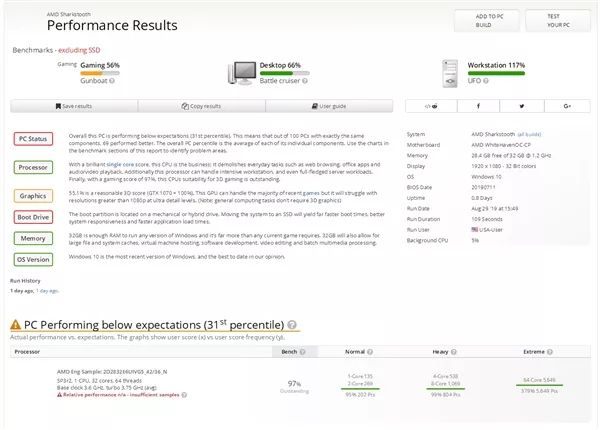 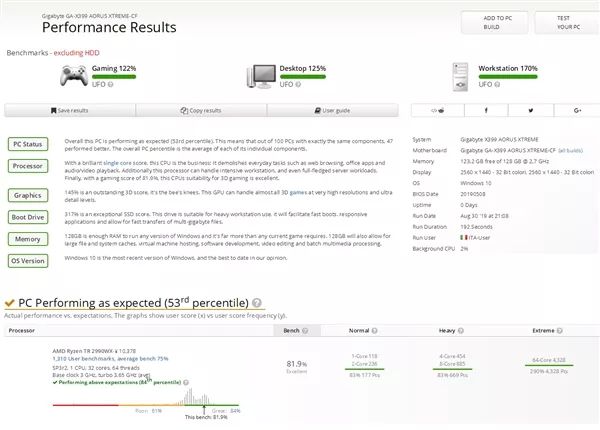 From the running sub-page,The thread tearer has a base frequency of 2.2GHz and a maximum clock speed of 4.17GHz and 32 core 64 threads.

This is slightly different from the previous 3GHz frequency of UserBenchmark exposure, which should be a problem with the test chip.

This new three-generation thread tearer ran with 32GB of memory on Windows.He ran out of a single core of 5523 points and a multi-core score of 68,576 points.

Of course, considering the consistent urine and the instability of the test chip of the GeekBench running desktop CPU, the running score is only for reference.

At present, the three generations of tearers are likely to stay at 32 cores. After all, this is enough for consumer applications, and there are no opponents at all. 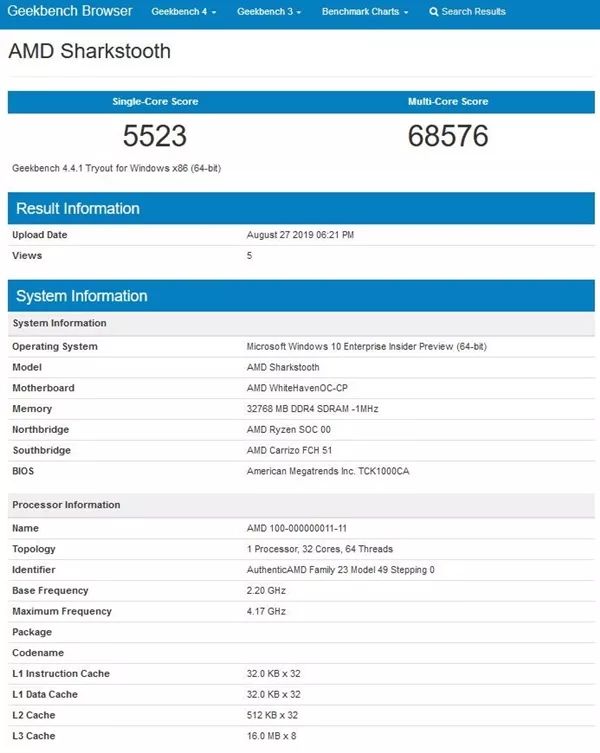 The three generations of Ruilong processors have evolved into the 7nm process and the Zen 2 architecture. The third generation of the Ripper processor is also about to catch up, and in the APU that the people like to see,Next year's next generation "Renoir" (Reano)Will follow up.

Previous Linux driver patches showed that the graphics core of the Renoir APU would not use the latest Navi, but the previous generation Vega, specificallyVega 10, up to 640 stream processors, but also upgraded, such as VCN video decoding unit from 1.0 to 2.0. 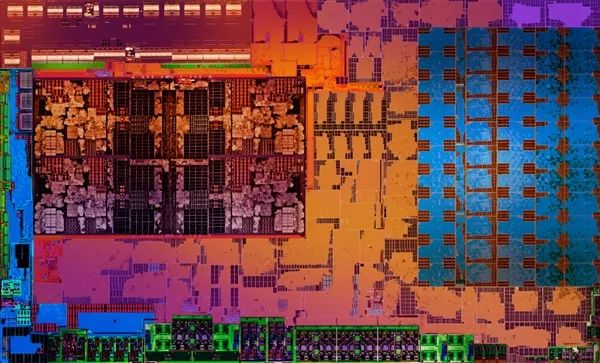 The latest deployment of the Linux driver patch on August 28 gives more information on the Renoir APU. The first isThe DCN display engine version is the latest 2.1, even higher than the 2.0 version of the Navi core, and the current Acer APU is only version 1.0.

Therefore, although the new APU GPU part of the architecture has not changed greatly, but there will be new features, even leading the current discrete graphics, which can be assured. 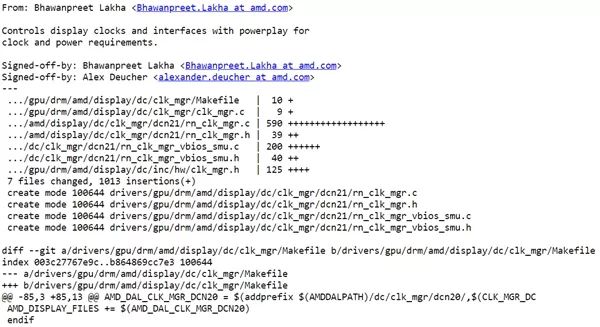 The importance of memory channel, frequency and bandwidth for APU is self-evident, especially game performance, which has great impact. According to the latest information,The Renoir APU will be the first to support the new LPDDR4X with a frequency of up to 4266MHz for greater performance and energy savings.

The LPDDR4X memory specification was born in 2014. The initial frequency limit was only 3200MHz. After several years of development, it has been pushed to 4266MHz. AMD does not support it, and the highest support is achieved. 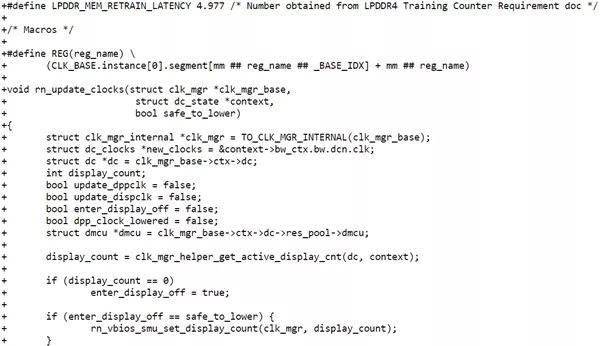 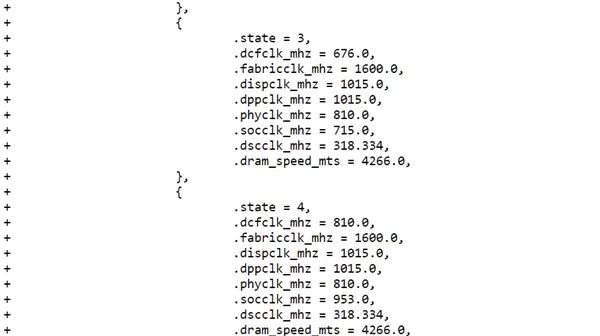 Excellent products will naturally be called and called.

Mindfactory.de is one of the most popular PC hardware retailers in Germany. Although its CPU sales do not reflect the global sales of AMD/Intel products, it also reflects certain market trends.

Recently, according to the latest data from Mindfactory, the Ruilong 3000 processor became one of Mindfactory's best-selling products after its official launch on July 7. It doubled its sales and sales in June.

Although AMD CPUs have surpassed Intel in Mindfactory for a long time, the sales of AMD and Intel are actually not much different because of the lower average price.

But when the Ruilong 3000 processor went on the market, this balance was broken.First, AMD sales accounted for 79% of the overall CPU sales in July (Ruilong 3000 accounted for more than half of them), and in terms of sales, AMD also reached more than three times its competitors.

In other words, AMD has doubled its sales and sales with the outstanding performance of the Ruilong 3000.

Thanks to this, Mindfactory's CPU sales and sales have increased significantly since July.