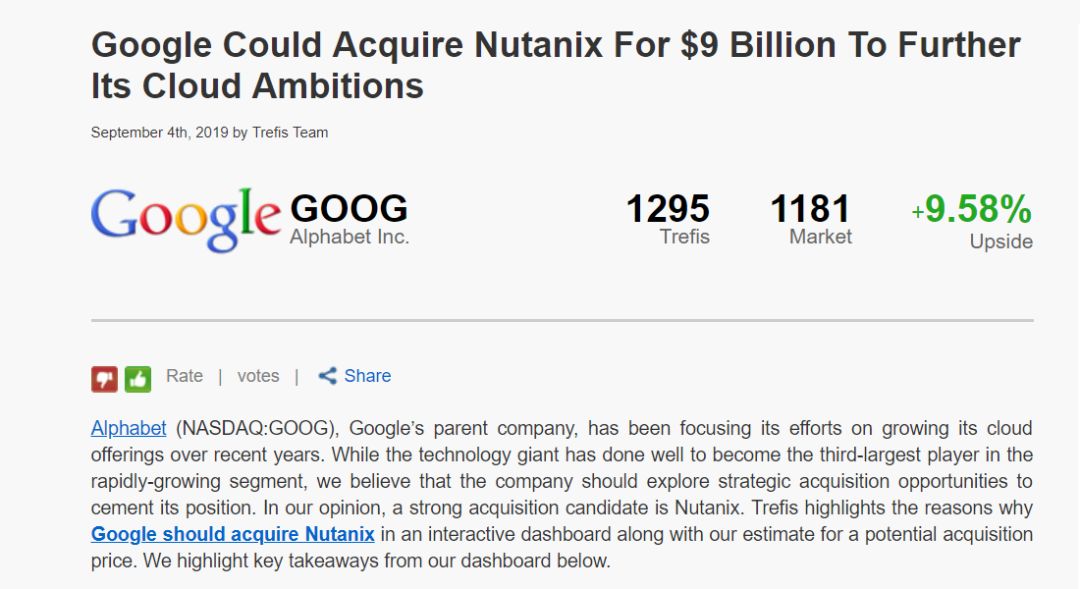 On September 5, 2019, Alphabet (Nasdaq Stock Code: GOOG), the parent company of Google, has been working on developing its cloud products in recent years. Although the technology giant has done well to become the third largest player in the rapid growth field, we believe that the company should explore strategic acquisition opportunities to consolidate its position. We believe that the strong candidate for acquisition is Nutanix. Trefis emphasizes why Google should acquire Nutanix in the interactive dashboard and why we estimate the potential acquisition price. We highlight the key points from the dashboard below. 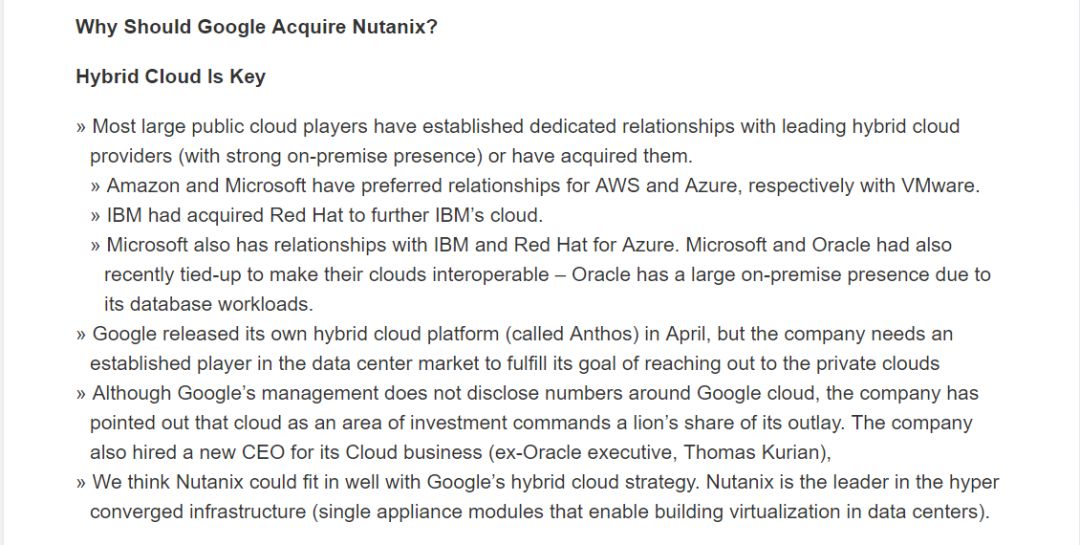 Why would Google take care of Nutjanx?

1. Most large public cloud providers have established specialized relationships with leading hybrid cloud providers (with strong internal collaboration) or have acquired them.

1) Amazon AWS and Microsoft Azure have an important partnership with VMware, respectively.) IBM acquired RedHat to advance IBM's cloud computing.3) Microsoft Azure also established a partnership with IBM and Red Hat. Recently, Microsoft and Oracle also began to bundle so that their cloud can interoperate, with a large number of internal collaboration with Oracle, due to the workload of the database.

2. Google released its hybrid cloud platform (called Anthos) in April, but the company needs a mature player in the data center market to achieve its goal of contacting private clouds.

3. Although Google's management did not disclose the data of Google Cloud, the company has pointed out that the cloud as an investment area accounts for the majority of its investment. The company also hired a new CEO for its cloud business (Thomas Kurian, former Oracle executive)

4, we think Nutanix is well adapted to Google's hybrid cloud strategy. Nutanix is a leader in superconverged infrastructure (a single device module used to build virtualization in a data center).

Links to the original text:

Related news
$9 billion! Google bought Nutanix
Why did Google's acquisitions fail over the years?
Nutanix launches multi cloud partner program in Chinese market
Hot news this week
Biden signed a chip and scientific bill, a video call of WeChat iOS internal test suspension window, the advanced CPU caused Win11 to be difficult to use, Huawei new machines enter...
How to regulate the "broken card" operation to crack down on electrical fraud to prevent "accidental injuries" with cards?
Musk's eyes! Lei Jun released a full -size humanoid robot Xiaomi self -developed strength explosion table
Japan has confirmed that China has overtaken the US for the first time in the world's top three indicators of scientific papers
iPad 10 will be absent from iPhone 14 conference: October appeared on Apple's last non -comprehensive tablet tablet!
Kuaishou TOB business Yu Bing: Self -developed chips or mass production after the end of the year, the video must be turned into light industry
The three major indexes of the US stocks opened sharply: ROBLOX fell more than 4%, Twitter and Tesla rose more than 3%
The global streaming media have increased the animation circuit is becoming a new "breakthrough" for Youaiteng
After selling Tesla for $6.9 billion, Musk said he was not selling it, but a survey said he was still selling it. The title of the world's richest man may not be guaranteed next ye...
Meizu Pandaer Great: All products are reduced by 200 and 30 -containing mobile phone cases, heat dissipation back clamps
The most popular news this week
The survey shows that nearly half of the US Android users consider changing Apple iPhone
New bottle of old wine! Industry insiders: No one has the best cost control than Apple
Amazon requires US regulators to withdraw votes: bypassing the company's harassment of Bezos to disturb operations
Pet dog infecting monkey acne suspected "Human Poor" American CDC Reform Control Guide
Space Launch System to Fly for First Time
Tencent's second-quarter net profit fell 56% from a year earlier to 18.6 billion yuan
Fabless customers cut back on chip orders affecting Q4 capacity utilization
Washington's suspicion of TIKTOK exacerbated: How will the Bayeon government weigh it?
Pinduoduo launched its cross-border e-commerce platform in the United States in September
Put an SSD in your phone: from 2,499 yuan