Microsoft has released a completely new to-do application. Do the old users of the Magic List stick to it?

Christian Reber, the founder of "Magic List" the other day, solemnly offered to Microsoft on Twitter to buy back his work and received a lot of responses from older users. It was not known whether it was coincidence or pressure. Microsoft released a new version of Microsoft To-Do (hereinafter referred to as To-Do) yesterday. 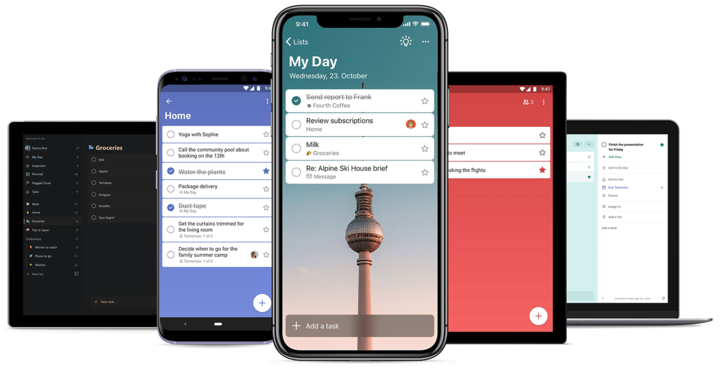 The new version of To-Do shows a full desire to survive, as the official promotional film says "We took the best of what you love", introducing a lot of wonderful list features, in order to make old users "feel at home." The implication is, "I've lived to be the son of your favorite wonderful list, and stop using the guy who will never be updated again."

At present, to-Do versions of Windows 10, iOS, Android, MacOS and Web have been updated to the latest version. 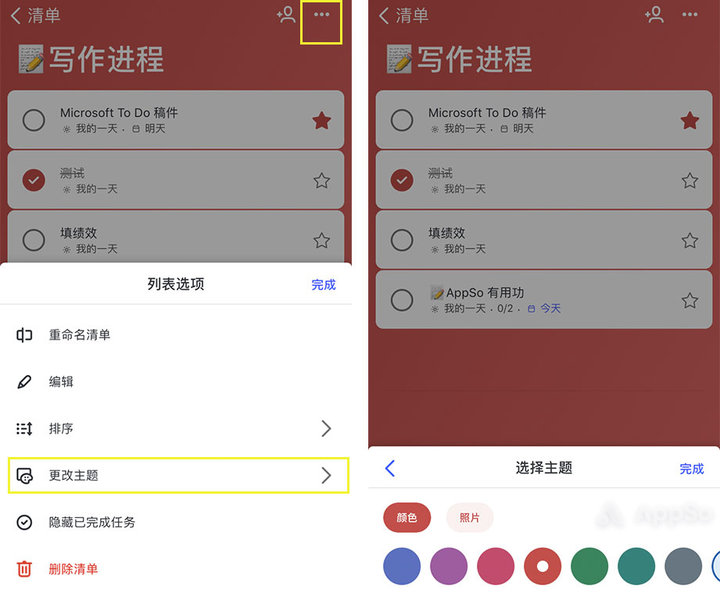 From the interface point of view, To-Do changed the previous version of the rough, whether it is the button, font or color are much more exquisite, and support for different task lists to set different backgrounds, click on the upper right corner of the task list. "

Of course, as an app, appearance is important, but the focus depends on whether it works. To-Do 's task management revolves around the "my Day" task list, which is equivalent to the "smart list" in the wonderful list.

"My Day" is initially presented as a blank day. You can add all the things you need to accomplish that day to the list. I don't know what to do today. Click on the bulb button in the upper right corner, the system will give suggestions based on the information of the task you completed the day before yesterday, the to-do list and so on. Click on the plus sign after the task to add it to the plan for the day.

One trick: Task lists start with Emoji when they are named, and the icons of the lists become emoji.

In fact, in August this year, To-Do has been a major update, filling in a number of previously missing functions, such as subtasks, list grouping, and so on. 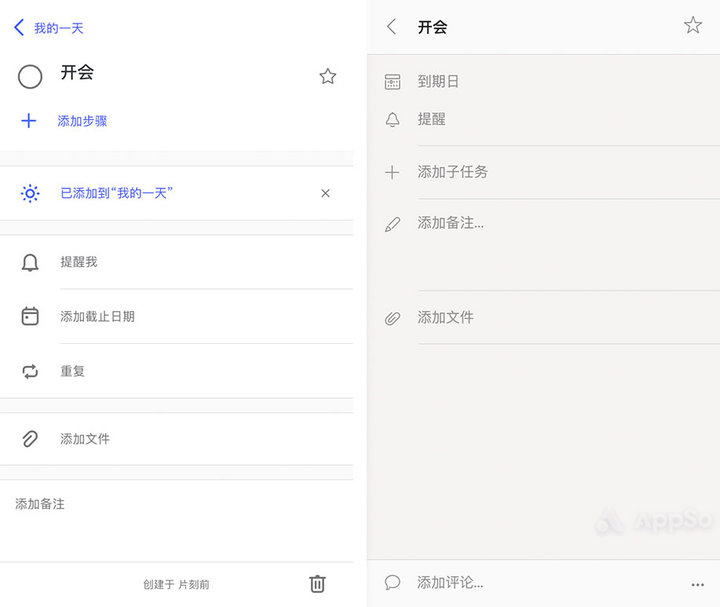 To-Do on the left and Fantastic List on the right

"Sub-task" is one of the important functions that the original To-Do lacks compared with the wonderful list. In To-Do, this function is called "step". When you open the task details, you can disassemble the steps on demand. It can be seen that today's To-Do has almost the same interface as the wonderful list. 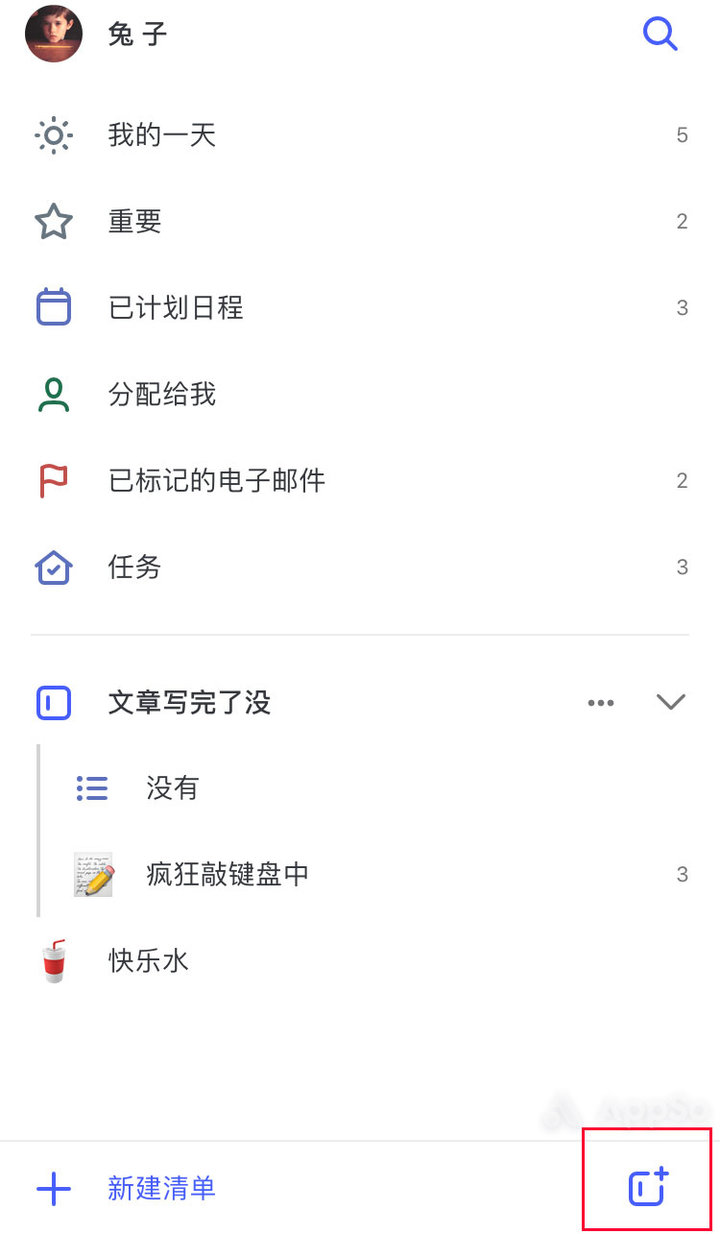 After clicking on the button in the lower right corner of the left taskbar to establish the grouping, you can group the list by dragging and dropping, or you can enter the list and click on the upper right corner. "

To-Do synchronizes marked messages for Outlook, which is turned off by default and needs to be turned on manually: click on the top user profile image on the task list 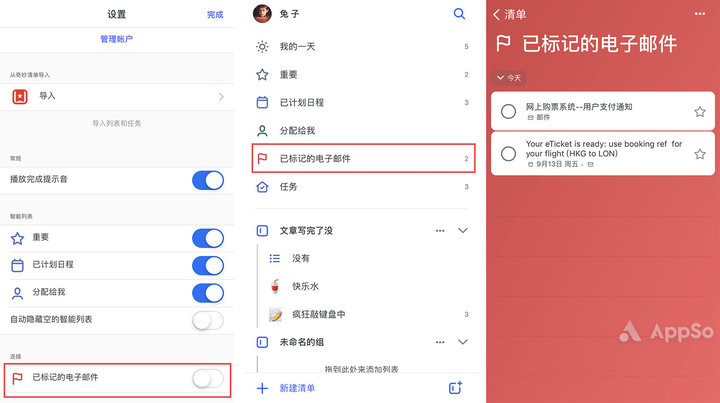 However, this feature serves as a reminder, and the content of the mail still needs to be skipped to Outlook.

In less than two major updates in a month, Microsoft's emphasis on To-Do is evident, and to-Do functionality is getting better and better, which also means that the magic list is getting closer and closer to leaving the stage of history.

Microsoft purchased a fantastic list in 2015 for between $100 million and $200 million, and founder Raeber joined Microsoft and continued to lead the application team. However, like many small teams acquired by big companies, Wonderful List can not escape the fate of being "assimilated" or even played badly. Two years later, the original To-Do developed by the Wonderful List team for Microsoft came out. According to the plan, this application will gradually replace Wonderful List, and Microsoft will provide migration channels for old users. 。 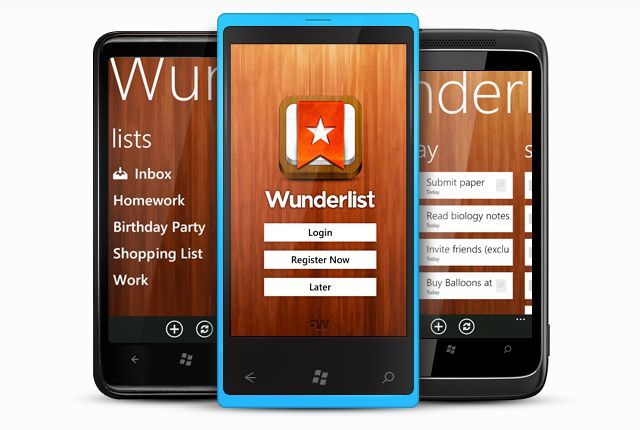 However, To-Do has been criticized since it came on the shelf. Many users complain that the new apps are far less useful than the fantastic list. In September of the same year, Reeber's departure from Microsoft also seemed to imply that the ideas of both sides were inconsistent. Last March, he explained on Twitter why the integration of the two applications was slow: Amazon's cloud service, AWS, was originally used in the Magic List and needed to be migrated to Azure after being acquired by Microsoft. "Everything needs to be rewritten (including integration into Exchange/Office), which is so time-consuming that both are delayed." Can be integrated.

In addition, many old users of the wonderful list are reluctant to migrate because of the bad experience of To-Do. The development progress is slow and users do not support it. The result is that the wonderful list has not been updated, the old users are lost, and To-Do has become semi-finished products and new users can not be retained. But Microsoft has said that once the To-Do functionality is developed, the magic list will stop servicing. 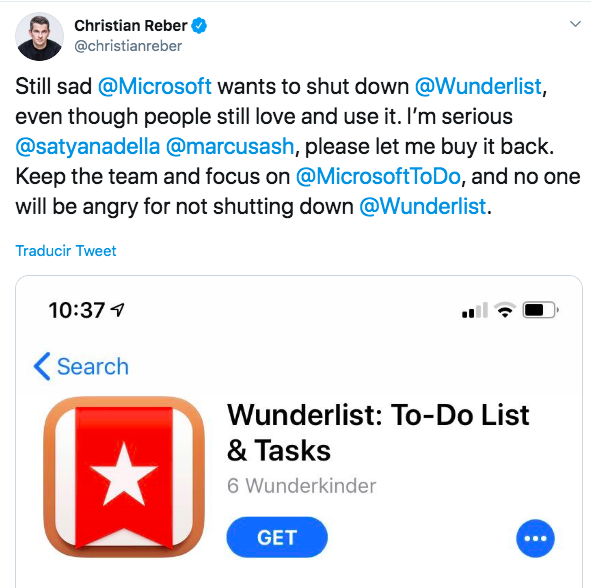 Although Microsoft did not give a specific time to close the magic list, Reeber apparently did not want this to happen. He said buying back his software was "a serious proposal" and listed development plans, including open source software, making software lighter, stronger APIs, and adding cross-team collaboration capabilities.

However, it's much harder for Reeber to get the list back into his hands than it was when he sold it. Although his comments give older users a glimmer of light, Microsoft's intention to replace the list with To-Do is clear from the fact that Microsoft released to-do updates immediately after his comments. 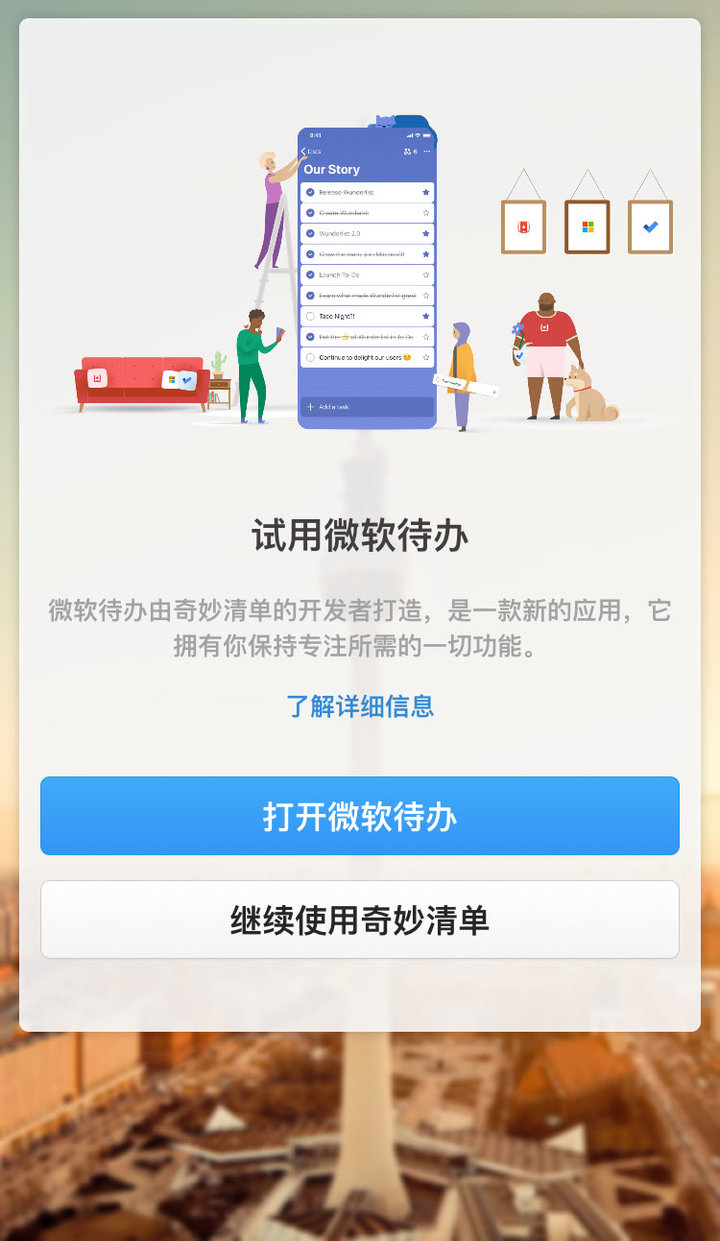 Overall, to-Do has been better at "inheriting" the benefits of the Magic List after several updates. The appearance of the new design is also impressive. The start-up and synchronization speed of mobile and computer versions are also satisfactory (I personally think the synchronization speed is much faster than Apple's own iCloud). If you are a loyal user of the Magic List, Consider moving.

You asked me how to import a fantastic list? Believe me, no matter you open the fantastic list or To-Do, you'll definitely see the migration hints, and you don't have to bother looking for them at all.

The picture is drawn from:Microsoft

Related news
Microsoft To-Do officially landed on macOS platform (figure)
Microsoft agent application To-Do officially login to macOS
Microsoft releases To-Do 2.0 to encourage users to migrate from wonderful lists
Microsoft has released a completely new to-do application. Do the old users of the Magic List stick to it?
Hot news this week
Alibaba: Shareholders SoftBank will settle in advance for advanced payment in advance involving a maximum of about 242 million ADR
Biden signed a chip and scientific bill, a video call of WeChat iOS internal test suspension window, the advanced CPU caused Win11 to be difficult to use, Huawei new machines enter...
Text message color, picture quality compression! Google calls out Apple for improving cross-device messaging
How to regulate the "broken card" operation to crack down on electrical fraud to prevent "accidental injuries" with cards?
Musk's eyes! Lei Jun released a full -size humanoid robot Xiaomi self -developed strength explosion table
Japan has confirmed that China has overtaken the US for the first time in the world's top three indicators of scientific papers
SoftBank Group announced the early settlement of up to 242 million forward contracts for ADRs in Alibaba, reducing its stake to 14.6 percent
iPad 10 will be absent from iPhone 14 conference: October appeared on Apple's last non -comprehensive tablet tablet!
Kuaishou TOB business Yu Bing: Self -developed chips or mass production after the end of the year, the video must be turned into light industry
The three major indexes of the US stocks opened sharply: ROBLOX fell more than 4%, Twitter and Tesla rose more than 3%
The most popular news this week
Fabless customers cut back on chip orders affecting Q4 capacity utilization
Washington's suspicion of TIKTOK exacerbated: How will the Bayeon government weigh it?
Pinduoduo launched its cross-border e-commerce platform in the United States in September
Put an SSD in your phone: from 2,499 yuan
China's largest general purpose drone! The first five flights were successful
IPhone 14 to be released alongside Huawei Mate 50: Which bangs do you choose?
Tencent's agent of the Russian war online game announced the suspension: Customs Customs in October
Will the heat this summer cause the winter to be extremely cold? Expert science
New Intel NUC Mini! First time with Core P 12 and a castrated version
Lenovo and Motorola are involved in the case! US ITC launched 337 surveys on mobile electronic devices