Qualcomm, a Wi-Fi black technology, gives me a glimpse of the future of wireless networks

Two days ago, the Wi-Fi Alliance announced the launch of Wi-Fi 6 certification program, just as Avan Er was in the U.S.Previous articlesAs mentioned above, this will be a new generation of communication technology as important as 5G. However, due to the lack of supporting devices and the high price of routers, it is difficult for most people to experience.

Now that Wi-Fi has become a necessity of life, whether Wi-Fi is fast and stable will even affect our quality of life. For example, playing a "King's Glory" at home on the weekend, if there is a wall or two away from the router, there may be occasional delays in Gokaton. 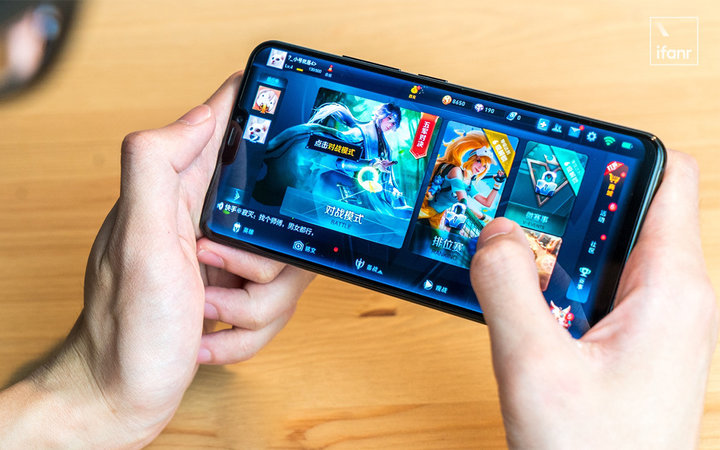 In this context, Wi-Fi technology is also evolving.

What is real-time dual-frequency Wi-Fi technology?

The so-called real-time dual frequency Wi Fi technology is simply to allow the mobile phone to connect to two Wi Fi at the same time, and realize network acceleration under the condition of constant bandwidth, also known as "dual Wi Fi acceleration".

Here "double Wi-Fi" refers to the two common bands of 2.4 GHz and 5 GHz that we usually connect to Wi-Fi at home. These two bands have their own merits. 2.4 GHHz Wi-Fi is characterized by strong wall-piercing ability, less speed than 5 GHz, and more interference from Wi-Fi.

However, 5GHz has the advantages of stronger anti-jamming and higher speed because it has more available channels, but its loss is relatively large when it passes through the wall.

It can be said that the family commonly used 2.4 GHz and 5 GHz bands have their own advantages. Generally, my connection habits are 2.4 GHz in the bedroom and 5 GHz in the living room.

If you compare the Wi-Fi channel to a highway, 5GHz has more lanes than 2.4GHz and allows more vehicles to pass at high speed.

2.4GHz has only 3 channels that do not interfere with each other, while 55GHz has 22 channels. The picture comes from: Zhihu

But the average mobile phone can only connect 2.4 GHz and 5 GHz in one band. Fish and bear's paw can not be both. Can we combine the advantages of the two bands?

This is what real-time dual-frequency Wi-Fi technology has to do, so that the two bands of Wi-Fi to form a complementary advantage, to achieve a higher rate, lower delay, more stable effect. 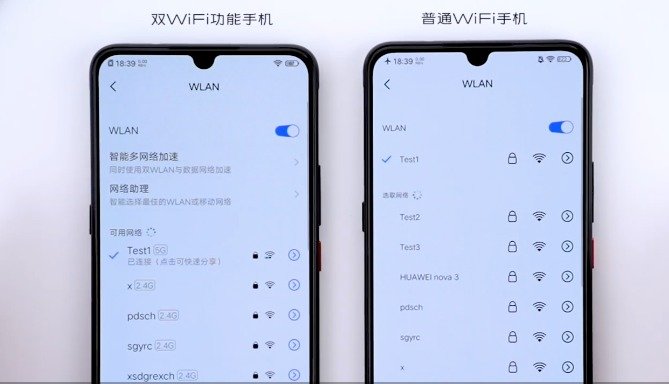 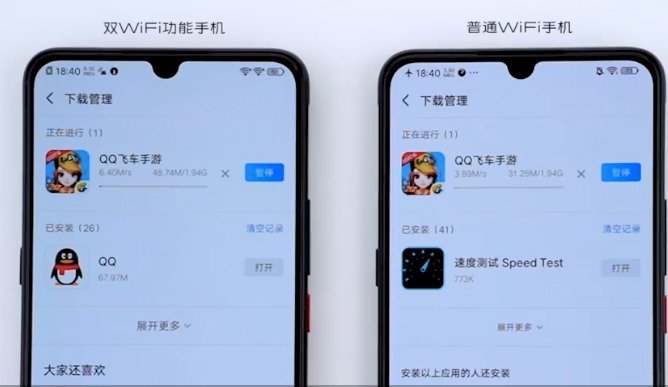 In terms of games, playing "King Glory" after the "dual Wi-Fi" function, we can see that the network delay is much lower than the single Wi-Fi connection, and it can keep green, silky and smooth, which can be said to improve the happiness of the Game Party in a straight line. 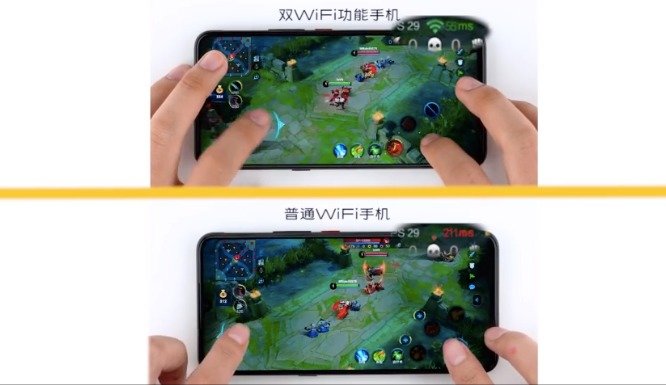 It is worth mentioning that real-time dual-band Wi-Fi technology is not only conducive to the download rate, especially for 10M small water pipe broadband users, but also the gospel of the Game Party.

Through the joint research and development of Qualcomm and Tencent, Tencent Hand Travel Accelerator has also been connected to real-time dual-band Wi-Fi technology, hoping to solve the real-time game's Carton problem by this function. At present, major head games can enjoy the acceleration effect of dual-Wi-Fi black technology.

When a Wi-Fi band is in trouble, more network transmission tasks are immediately handed over to another band, so that the mobile phone's Internet access rate remains stable and high-speed.

In addition to faster access to the Internet without card, real-time dual-band Wi-Fi technology also has a "secret weapon".

Now there are more and more connected devices in our home, except for mobile phones, flat panels and laptops, to smart televisions, smart speakers, and smart light bulbs. 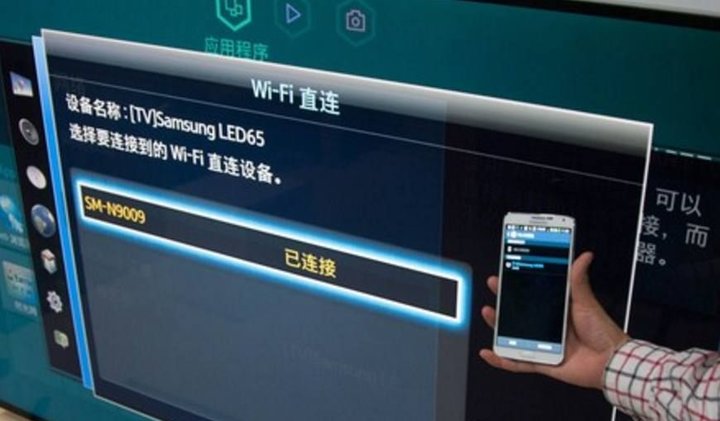 For example, in some mobile televisions, Wi-Fi is often used directly, but mobile phones can not access the Internet at the same time or because of the serious problems of time-division switching. Real-time dual-frequency Wi-Fi technology can make two bands work together, one is connected to TV, one is connected to the Internet, two are not delayed. 。

This technology is also very useful when digital cameras transmit photos to mobile phones via Wi-Fi. Users no longer need to disconnect when transmitting photos. They can share photos directly on social platforms while transmitting them.

At present, the mainstream mobile phone manufacturers such as Apple, Huawei and Xiaomi regard the Internet of Things as their future strategic focus. They hope to take the lead before the arrival of IoT-based interconnection. They also have higher requirements for the interconnection experience between devices. Real-time dual-frequency Wi-Fi technology may soon become the standard of mobile phone manufacturers.

Although real-time dual-band Wi-Fi can be used without dedicated routers, it still needs the cooperation of chip manufacturers, mobile phone manufacturers and application manufacturers. Currently Qualcomm has been supported at the platform level, and most of the mainstream Android manufacturers use Qualcomm chips, which also allows the "dual Wi-Fi" to land faster.

In the 5G era, the innovation of Wi-Fi technology is still important

At present, it seems that real-time dual-frequency Wi-Fi technology can bring significant improvements to slow network speed and unstable network scenarios. But when the faster 5G network and the popularity of Gigabit home broadband, is there no use for it?

This is not the case. According to data from the Wi-Fi Alliance, more than half of the world's data is currently transmitted through Wi-Fi. Even with the popularity of 5G, Wi-Fi is still badly needed in many indoor scenes, such as homes and businesses.

The Wi-Fi 6 mentioned earlier can achieve the same speed as 5G, more access devices, and lower energy consumption, while real-time dual-frequency Wi-Fi technology can bring these advantages to the extreme, so that the Wi-Fi experience can be fully improved.

Behind these Wi-Fi technologies, there are Qualcomm figures. In addition to the first "dual Wi-Fi" launched last year, Qualcomm M855 flagship mobile platform has also supported Wi-Fi 6 Ready, Qualcomm can be said to be the pioneer of Wi-Fi technological innovation. 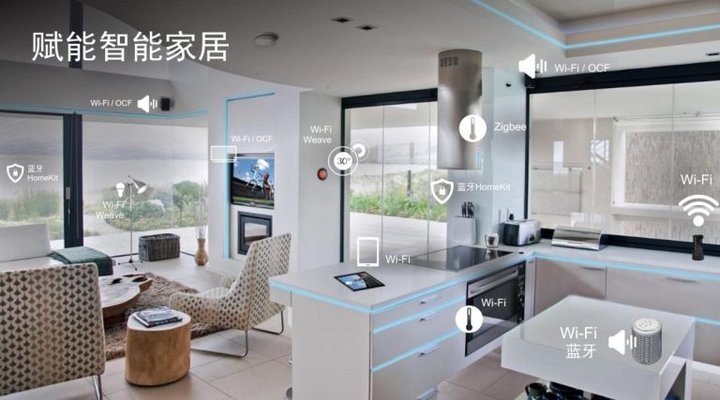 From a series of Wi-Fi technologies launched by Qualcomm in the past two years, we can see that the future of Wi-Fi is not only the improvement of network speed, but also the networking and interaction of a variety of intelligent devices.

In the future of interconnection, no matter which manufacturer's device will become the hub of smart home, it may be inseparable from these solutions of Qualcomm. The future importance of these Wi-Fi technologies in the field of wireless network is probably equivalent to the significance of the Miaolong processor to the Android flagship.

Related news
Huawei announced the launch of a new Wi-Fi product brand, AirEngine Wi-Fi 6, which has been deployed on a large scale.
EMUs are fully upgraded: 80% of China Railways have Wi-Fi high-speed Internet access!
Qualcomm, a Wi-Fi black technology, gives me a glimpse of the future of wireless networks
Xiaomi unveils the mystery of dual Wi Fi, which coloros 6 already supports
Invincible hand within a thousand yuan! Evaluation of the ax3600 of Xiaomi aiot router
Can't you tell between Wi Fi and WLAN? China Telecom Science Popularization
Qualcomm, Broadcom and MediaTek have developed Wi Fi 7 chips, and it will take 2-3 years for them to come out
Redefine high performance! An article about Qualcomm Wi-Fi 7
Wi-fi 6 is officially outdated! Wi-fi 7 routing/mobile is coming: This speed says goodbye to wired
Apple is behind? Intel Wi-Fi 7 is here: Twice the network speed
Hot news this week
China has found 35 known cases of the new zoonotic virus Langya
Losses in a single quarter of $ 23.4 billion a record, SoftBank did not carry the plunge of technology stocks and the devaluation of the yen
The prevention and control of the American Monkey epidemic has failed. What should I pay attention to?
Kuaishou launched a self-developed cloud intelligent video processing chip: The chip has been streamed successfully
The new product of Xiaomi MIX is coming: both internal and external dual -screen has been upgraded to make up for the previous generation.
Ministry of Public Security: Single telecommunications network fraud continues to cause 40 % of all electrical fraud cases
A new zoonotic virus, Langya, found in China has not yet been confirmed to be transmitted from person to person
A tech company in Shanghai has been fined 220,000 yuan for swiping orders to improve its ranking on Yelp
Special price "kill ripe"? Bike-sharing platforms have different prices for the same package for different users
Alibaba: Shareholders SoftBank will settle in advance for advanced payment in advance involving a maximum of about 242 million ADR
The most popular news this week
Studies have shown that the attacks by the game company have doubled in the past year
Apple's new iPad does not support 3.5mm headphone hole, Baidu map big update, anchor adopted two protected plants were checked, Rui Dragon 7000 series price stolen, these are the o...
A proposed ban on Internet addiction in California has failed
Industrial star attraction strategy to cope with the American semiconductor strangulation strategy
"Mother of the Chip" suffers! The United States blocked EDA to China: not so simple
8K Super Clear screen records Lingyue of China Space Station! Only 0.72 seconds
Sell to Tencent less than a year Sogou by the big purge: three major businesses are gone
After being suppressed by the United States, why did Ren Zhengfei thank you?
The fightback is coming! After ditching 34 Chinese suppliers, Apple was decisively rebuffed by two Chinese companies
Too sudden! The United States is clamping down again