Intel will launch two new processors in October, one is Core i99900KS, the full-core 5GHz processor, and the HEDT flagship of the Cascade Lake-X family, which is probably the processor layout this year.

Compared with AMD's promise to release a new generation of processors a year, Intel's CPU processor layout in the past two years has been a bit messy, mainly craft, complex architecture, and too many possibilities to combine, covering three areas: mobile, desktop and server.

Hardwareluxx website has compiled a route map of Intel CPU processor recently. The information is clearer, you can refer to it.

First of all, let's take a look at the processor roadmap of the mobile platform.

In the mobile CPU market, Intel has launched two kinds of 10-generation processors this year, including Comet lake-Y/U and Ice Lake-Y/U series, which are processed at 14 and 10 nm respectively. The core architecture of the CPU is Skylake and SunnyCove, respectively. The core structure of the CPU is also different. The 14-nm Skylake is Gen 9.5, and the 10-nm Ice Lake is Gen 11.

In 2020, there will be a 14-nm Rocket Lake-U series of processors with Skylake architecture and Gen 9.5 level verification.

10nm nodes have Tiger Lake and Alder Lake, in which the latter architecture, and the core is uncertain that, Tiger Lake's CPU is the next generation of Willow Cove, with Gen 12, which is Xe architecture and is expected to be available in early 2021 by the end of 2020.

The 7nm node will have a Meteor Lake processor, but the architecture, the kernel display is still uncertain, and it will go on sale in 2022.。 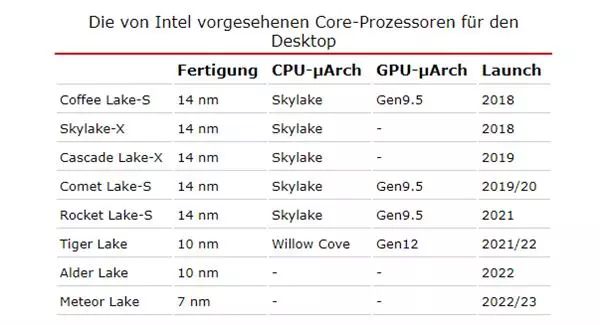 Desktop processors, the Coffee Lake-S,Skaylake-X series has nothing to say, now the main force, nine generations of Core Rui are also the product of coffee lakes, that is, the core number is different.

And then there's Cascade Lake-X, or 14nm Skylake architecture, and that's what was released in October..

On desktop processors, the 14nm process is the longest, until Rocket Lake-S uses it and will not be eliminated in 2021.

Hardwarluxx did not mention Ice Lake-S in the 10-nm process desktop processor. It jumped directly into the second generation Tiger Lake-S, and used the new generation CPU core Willow Cove and Gen12 to verify.

Server CPU, Cascade Lake was released in the first half of this year, and next year there is Cooper Lake, or 14nm process.

The 10-nm Ice Lake processor will be released in the second half of 2020, which is why Intel recently said it would introduce two generations of server processors in a year.

And then there's the Sapphire Raids,Granti Rapids processor, which came out in 2021, 2022. Using 10nm and 7nm processes, the CPU kernel architecture will also be upgraded to Willow Cove and Golde Cove, which is an updated generation of kernels.. 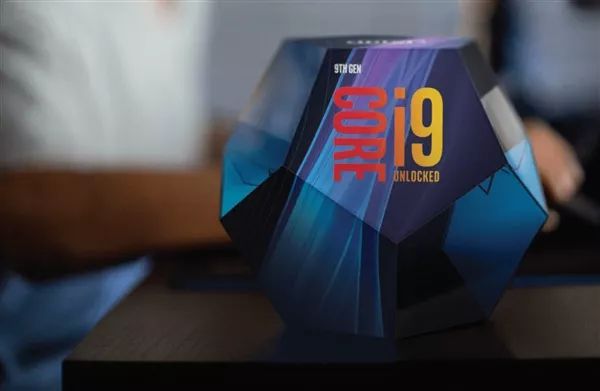 VMware is one of many early use plan participants in the product.

In particular, it is worth mentioning that:Intel is expected to be available by 2021. CXL ultra-high speed interconnection protocol, and memory-consistent FPGA interface is part of the Intel roadmap.

According to previous exposure, Intel's desktop platform Rocket Lake, which will be launched in 2020-2021, will also support PCIe 4.0.

AMD previously launched PCIe 4.0 on the Ruilong third-generation processor, the RX 5700 graphics card, and the 570 motherboard. Intel has always claimed that PCIe 4.0 is useless now, and Intel is also very cautious, emphasizing that PCIe 4.0 is not useful for games. 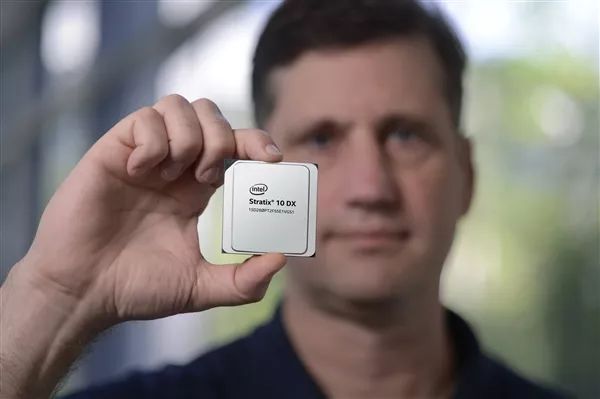 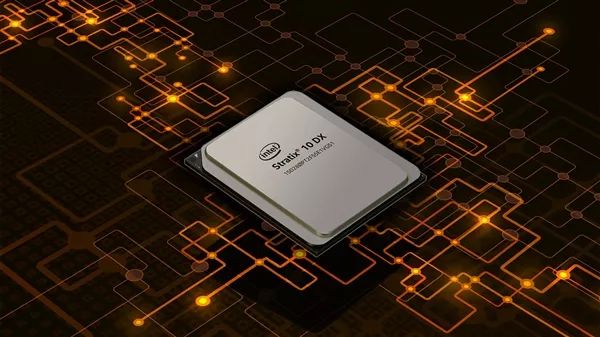 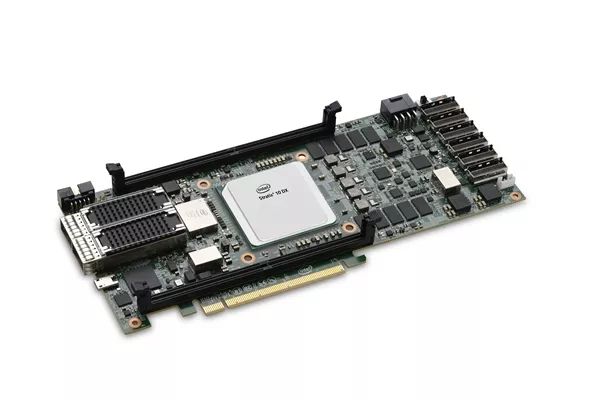 Prior to this, Intel had shipped the first Agilex FPGA, to be manufactured in 10nm process for the first time, and it was also the first FPGA product that integrated almost all the current innovative technologies of Intel, with heterogeneous 3D SiP stereoscopic packaging.PCIe 5.0 busDDR5/HBM/Aoteng DC persistent memory, eASIC device One API unified development interface, cache and memory consistency CXL bus, transceiver data rate is the highest 112 Gbps, currently the industry first. 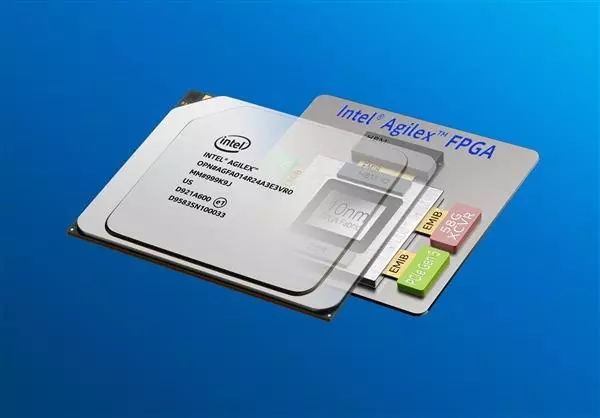 Related news
Intel finally admitted that 7nm was behind: he couldn't catch up with AMD in two years
Intel soul torture: 14nm is not good?
Intel roadmap: 14 nm will take up to 2021, 7 nm and three more years
Korean media: Samsung will OEM Intel 14nm processor
Samsung denies that it will manufacture 14 nm processors for Intel
Intel's second quarter revenue of $19.7 billion
Intel 7Nm announced delay: it is not ruled out that the supercomputing GPU chip will be contracted by three parties
Intel: recall of CPU Dashen, mass production of 7Nm in 2023, outsourcing of some chips
Intel Technology king returns: "7nm" ship 35 million, "1.8nm" ahead of schedule
Hot news this week
A small plane in the US has crashed into a 30-metre high voltage power line and got stuck: 80,000 people affected
Can recording others' wechat chat records be used as evidence? The Beijing Internet Court has an answer
Alibaba launched a new cross-border e-commerce platform in Spain, aiming to operate independently in the middle and high-end market
It's not just Huawei! Beidou has penetrated more than 20 industries and applied more than 15.5 million products
When pure water is used in China team to solve the problem of seawater hydrogen production: it is expected to become an original industry
A Tesla crashed into two cars in Taizhou, Zhejiang province, killing two and injuring one, police said
The appearance of Xiaomi's mini console is revealed for the first time: an all-metal body with a strong apple smell
Breaking the spell of "Android 3 year must card", the new Breguet mobile phone will be sold for the first time tomorrow: from RMB3499
Be careful with your phone for a long time! The aunt played with her mobile phone so much that her fingers got stuck
Google's Project Zero team accuses vendors of slacking after ARM GPU bug exposes Android upgrade woes
The most popular news this week
Why is the Apple Pencil 2 not supported? iFixit takes apart the iPad 10 to find out
Zte's experience proves that there is no way out of appeasement and peace can only be fought out
China's growing presence in the global high-tech sector is unacceptable to the US
Us to investigate Lapsus$hack, Microsoft, Nvidia and others were breached
From January to October this year, the number of global travel app downloads approached 2 billion, with China's Amap, Baidu Map and Railway 12306 taking the top three places
With the acquisition of Pulse, Mozilla will develop a new approach to machine learning
Did the United States achieve its goal? More than 40 suppliers went to the United States with TSMC
Microsoft may not be able to offer its Microsoft 365 service in German schools after two years of efforts failed
A record $50 million in compensation! In the final judgment of the dispute over the infringement of Minecraft by Mini-World, NetEase won the lawsuit
Manufacturers like Samsung and Xiaomi have been affected. Google has revealed a dangerous flaw that threatens millions of Android devices