6 Core 6 threads. For the first time in the three generations of Ruilong family, multi-threading is not supported. The frequency benchmark is 3.6 GHz and the maximum acceleration is 4.1 GHz. It integrates 3MB secondary cache and 32MB tertiary cache. The memory supports dual-channel DDR4-3200 and interface AM4.

In terms of performance, the official announcement is that high-quality special effects are fully available in popular games.Stable above 90FPSIt's okay to eat chicken smoothly.

There will be another one in the future.Ruilong 53500The specifications are basically the same as that of Ruilong 53500X. The main reason is that the cache capacity is cut in half, and the price is bound to be under 1000 yuan. 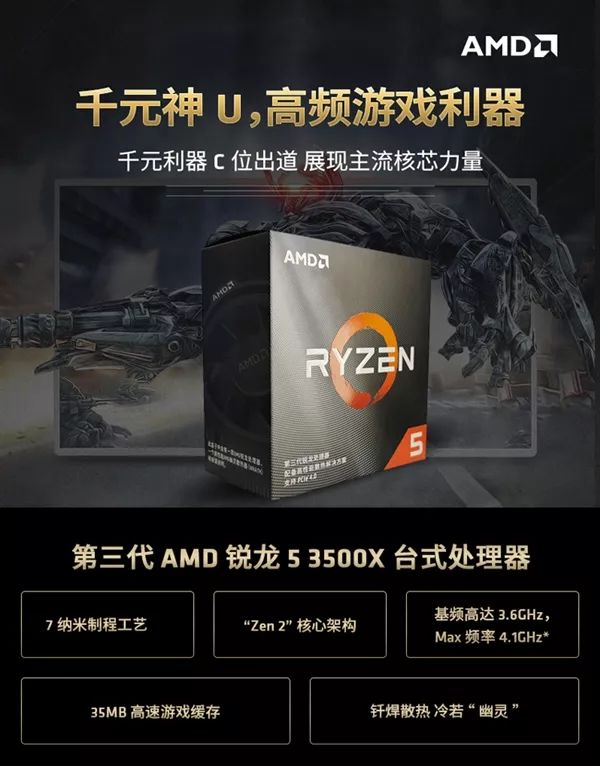 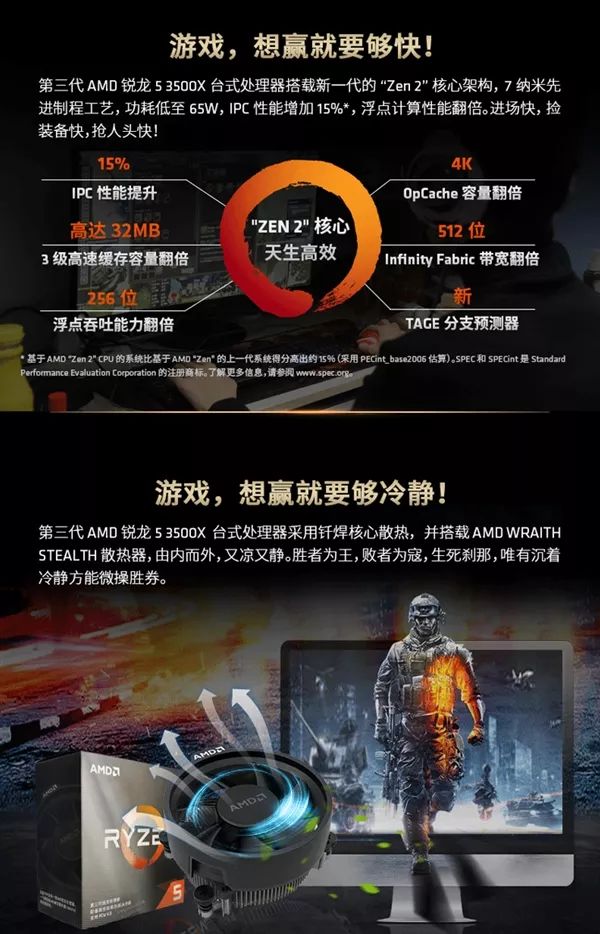 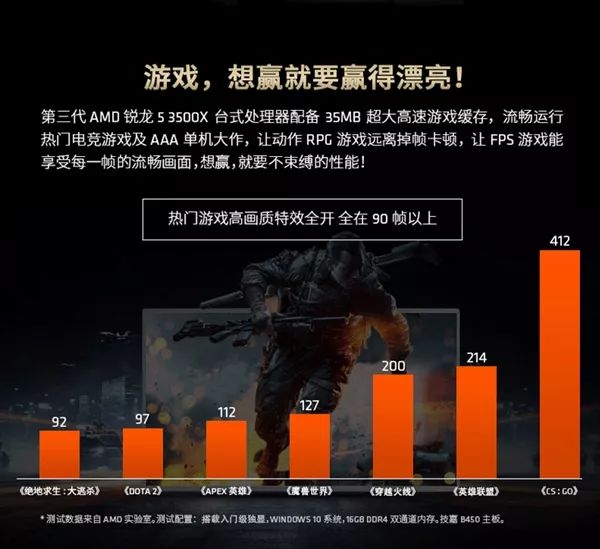 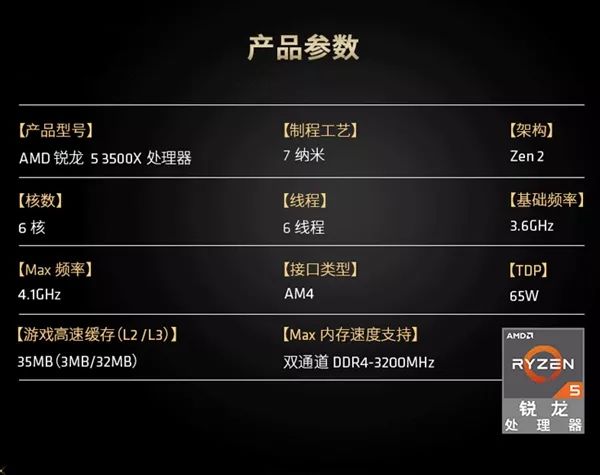 Speaking of AMD's 16 core 32 threads Relong 9 3950X, which was first built for the mainstream desktop market, it has been delayed to November. Officials are further adjusting its frequency and performance to meet player expectations.

Although it still has to wait for more than a month, howeverRuilong 9 3950X has appeared on the dealer's list. Interestingly, the OPN PIB shows 100-100000051WOF. The three letters of WOF at the end mean that there is no original fan. 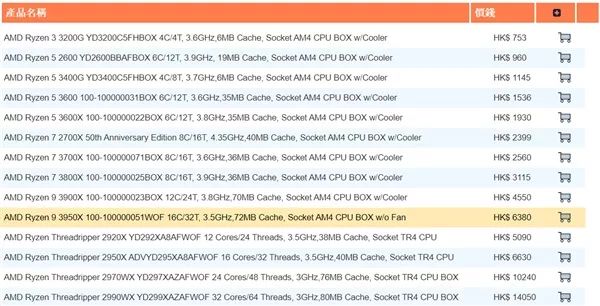 We know that each model of AMD in the three generations of Ruilong will be accompanied by an original radiator, different levels of radiators are also different, the higher the model, the better.On the official website of AMD, the box number of Ruilong 9 3950X is 100-100000051BOX, and the top-end ghost Prism RGB radiator is clearly marked.

Obviously, for these players, it would be a waste to buy the original radiator, so AMD specially prepared two versions, just hope that the version without radiator can be cheaper.

But can you imagine AMD going up in price?

In the past, Intel led the price hike. Last year, Intel just released the Ninth Generation Core Processor. Core i-9900K once went up to $600, and its long-term price was around $500. These two days, it fell to the historic low of $475.

Now the situation is different. It's the turn of the wind and water. This year, it's AMD's processor that leads the price increase. Although Ruilong 9 3900X is only the second flagship of AMD's 7-nm Ruilong 3000, it's still one of the best choices at present when Ruilong 9 3950X is postponed.A 12-core 24-threaded game processor can be purchased for a starting price of $499.。

Unfortunately, the supply of the Dragon 9 3900X has not been enough.It's been two months since it went on the market and it's still in the rush to buy. In the past two days, the price has gone crazy again. It's almost 800 dollars for both American and American eggs, and it's more than 800 dollars.。

Let's talk about the glittering Xiaolong in the data center.

Since returning to the high-performance CPU market with Zen architecture processors in 2017, AMD's X86 share has been increasing. The first two generations of 14nm and 12NM processors are warming up. This year's 7-nm Sharpson and Xiaolong are the main players. This time AMD has also caught up in performance.

In the server CPU market, AMD's share was worse than the desktop, with a minimum of 1 percent, but from 32-core Naples to 64-core Rome this year, the EPYC processor not only continued to surpass the core, but also caught up in performance. AMD officially released the EPYC 7002 series to set more than 80 world records. 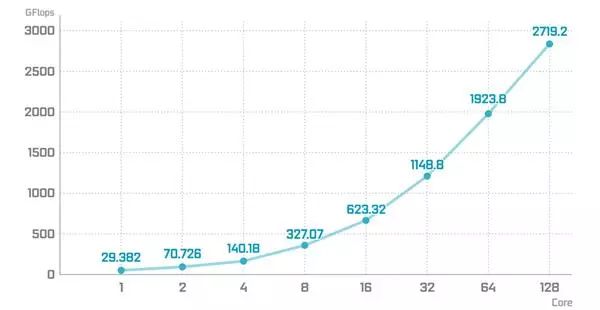 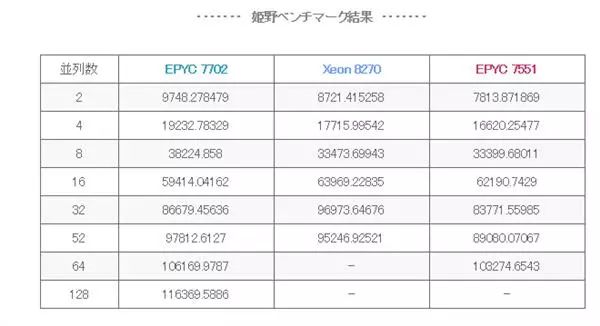 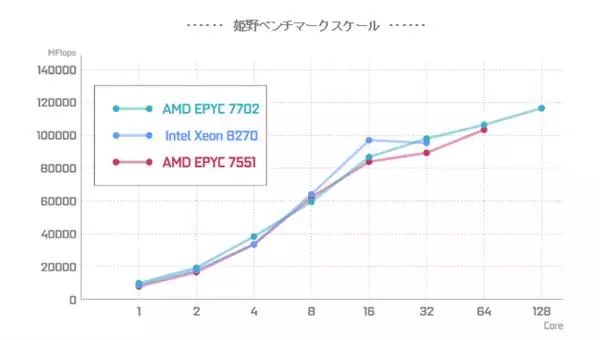 The Parallelism of the Himeno Benchmark Test

Compared with Intel's 26-core processors, HPL's performance is not much better, but the original article mentioned that this is because of the problem of AVX512 instruction set. AMD processors do not support this instruction set, but can still improve performance by violence through the advantage of core number.

In summary, on the EPYC 7002 series of processors, it can be seen that AMD not only greatly increases the number of CPU cores, but also the single-core performance is improved. As for follower competition, while the addition of the AVX512 instruction set is missing, the strategy for the core of the heap is also very effective, and is implemented in the case of a 20% cheaper CPU.

Related news
YES! AMD1000 yuan invincible U shiny debut, 16 nuclear supreme for the sake of users
Surprise officer sends multiple surprises to associate amd yes family beyond expectation!
AMD YES! 15 inch large screen surface laptop 3 in appointment
They say that AMD Yes is actually using N cards
Yes in capital! Endurance test of AMD 7Nm sharp dragon 7 4800u notebook for nearly 14 hours
AMD Yes！ New product announcement of redmibook: see you on May 26
Can mobile SOC's strongest disruptor join AMD and continue yes on the mobile terminal?
I changed a tube of toothpaste this year?! I think Intel is going to be yes
AMD Yes cool down! Intel retakes x86 processor market: 12 Generation Core too strong
One article to understand AMD's new flagship graphics card! Netizens call "AMD Yes"
Hot news this week
During the quarter, we signed a multi-year intellectual property patent licensing agreement with a major licensee. This positive result enables us to obtain more 5G patent licensin...
Win10 digital version will be discontinued: free whitewash is still available Microsoft has not been under the dead hand for 7 years
Microsoft posted $17.4 billion in non-GAAP net income on revenue of $52.7 billion in the second quarter of fiscal 2023
YouTube complained about: using offline return-to-work policy to illegally block contract workers from unionizing
India receives Radio Signals from Galaxies 9 billion light-years Away Astronomers: Aliens not involved
Beautiful country semiconductor ushered in the winter, US high enterprises inverted, our country market doesn't buy it!
Cybertruck skipped tickets again! Mass production of Tesla electric pickup truck will not wait until 2024.
Apple will relax measures to deal with COVID-19 's epidemic and encourage employees to go back to work
Huawei P60 Pro latest configuration chart revealed: variable aperture and satellite communications are on the list
Intel: 14 generations of Core in the second half of the year, and build a new architecture from zero next year.
The most popular news this week
ChatGPT after global explosion: Baidu announces similar AI service to be launched in March
Lei Jun announced the first major event at the beginning of the year: it is critical to Xiaomi!
Carry the cauldron! Three out of ten divorces are linked to one partner's addiction to their mobile phone, research suggests
The iPhone is No. 1 in China! Why do people prefer Apple to Android?
China develops starch and protein synthesis technology for corn stover: Costs drop dramatically
Technology tree point crooked? Toyota's new patent: hold the door handle can be sterilized
Eight satellites in eight hours! China rushed to Venezuela's relief efforts
Apple bet on mixed reality, but the selling point of the product is not enough.
Baidu is reported to launch an AI chat robot service similar to ChatGPT in March this year.
The most powerful SSD becomes the last song Intel retired Aoteng hard disk: 6 years of performance is still leading