Intel has just officially released a new generation of desktop burning Core X Series processors, codenamedCascade Lake-XFor enthusiasts, creative professionals, freelancers, design studios, etc., performance has improved by up to 7% compared to the previous generation and by up to 14% compared to three years ago. 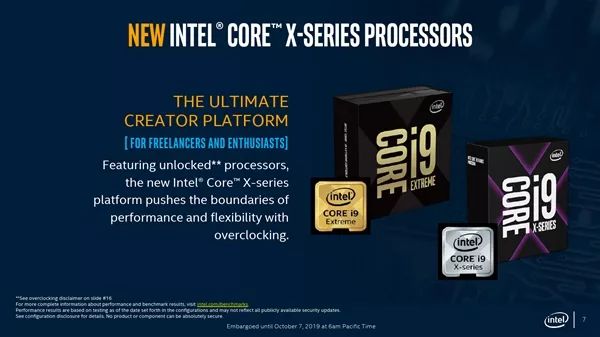 The new Core X series, like the previous two generations, is also based on 14nm technology and Skylake architecture, with a maximum of 18 core 36 threads. In addition to continuing to increase the frequency, the upgrade focuses on memory, PCIe, AI artificial intelligence, network and other aspects of a new look, while maintaining the LGA2066 interface, and continuing to match the X299 motherboard.

This generation of Core X continues to be fully supportedRuifrequency 2.0, Ruifrequency Max 3.0Two kinds of dynamic acceleration technology, the latter has been further upgraded and optimized to select one or more cores with the best physique to achieve higher frequencies, and has been deeply supported by Windows 10.The maximum acceleration frequency is 4.8 GHz, which is 300 MHz higher than the previous generation.

At the same time, comprehensive support. Intel Performance Maximizer (IPM) One-button Over-Frequency Tool(Previously only supporting the 9th generation Core K series), will try the processor's various frequency and voltage combinations, until the most stable parameters are found, the whole process of automation is easier, more reliable and more stable than manual overclocking, of course, the frequency and voltage will be relatively conservative in the end.

On the memory side, the rated frequency of the four-channel DDR4, is still increased from 2666MHz to2933MHzThe maximum capacity is up to256GB(a single 32GB).

The PCIe bus aspect is still the same.PCIe 3.0However, the total number of channels supported by the platform increased from 68 toArticle 72Among them, there are 24 X299 chipsets.The processor opens all 48 from 44.

AI fully introduced DL Boost deep learning acceleration. This is the first time that this function has come to the high-end desktop platform. AI reasoning speed is up to 2.2 times higher than that of the previous generation, compared with the platform upgrading of three years ago, up to 7.9 times.

On the network side, wireless supportIntel Wi-Fi 6 Gig, based on AX200 chipsetPlus ten generations of Core on notebooks, Intel is trying to popularize the rhythm of Gigabit Wi-Fi 6 and upgrade wired toIntel i225 2.5G is 2.5 gigabit networkThermal design power consumption is as low as 1.95W, and the price is only $2.4. 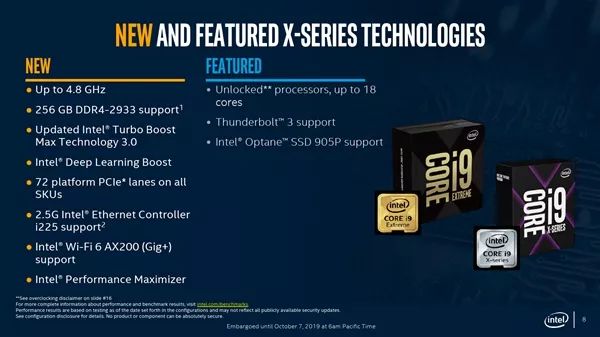 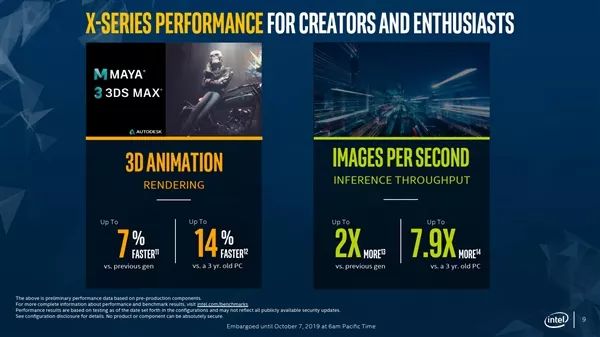 All four models can be unlocked and overclocked. They all support proud memory acceleration. The thermal design power consumption is 165W as that of the previous generation.

The new generation of core X series fever processors will be launched in November, and the X299 motherboard will also be upgraded. For example, Gigabyte has already seized three new products. 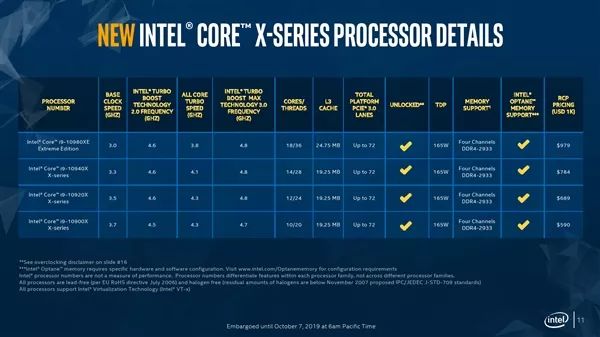 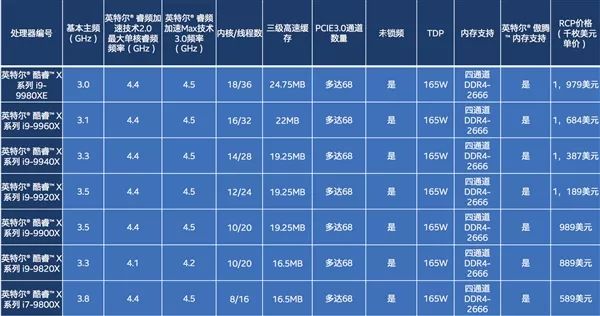 According to Intel, the aim of price adjustment is to be more reasonable and effective immediately. However, the integrated system and OEM manufacturer purchasing according to 1000 quotations will benefit first, and later will be passed on to distributors and benefit individual consumers. 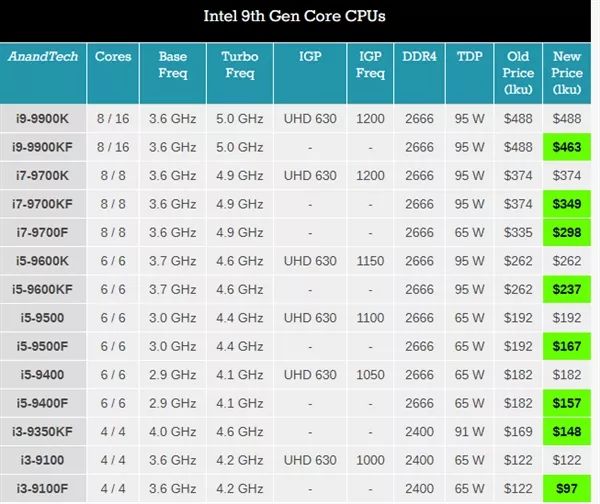 It should be noted that, although 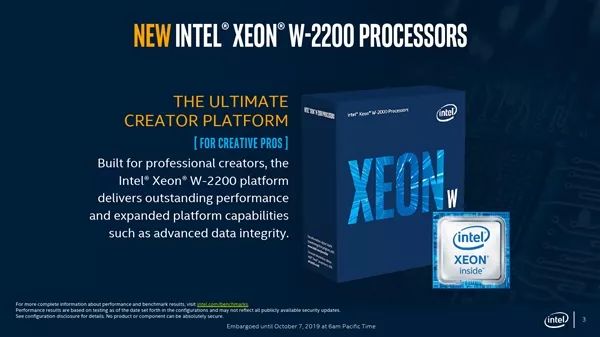 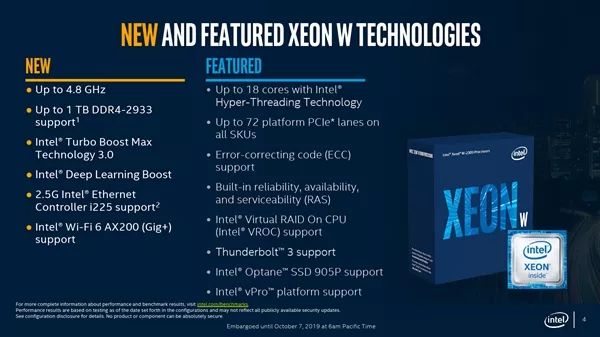 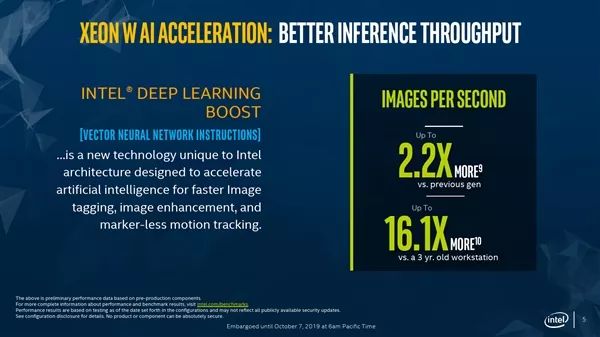 Zhiqiang W-2200 series products will be on the market from November. 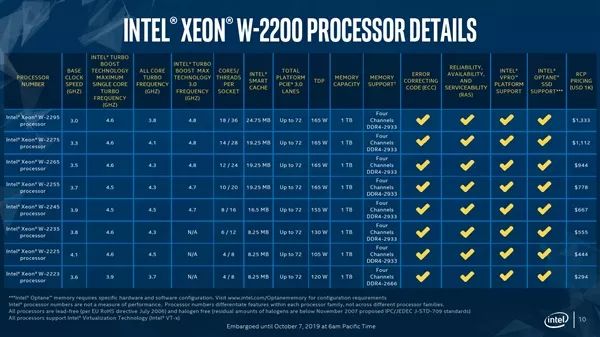 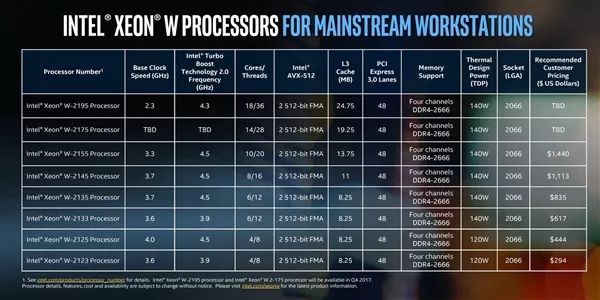 Related news
16-inch MacBook Pro will use Intel's 9th generation Coffee Lake Refresh processor
Intel new fever grade core X processor released, 9 generation Coffee Lake official drop 20%
Hot news this week
Titanium Media Publish Assesum: People's Bank: Digital RMB Winter Olympics pilot has entered the sprint phase; Tesla announced that 250,000 Powerwall energy storage power stations have been installed
Alibaba and Tencent have received more than half of the 43 antitrust fines, and lawyers say the penalties are likely to increase
Study on the sequelae of COVID-19 in the Chinese team: Shortness of breath, depression and other problems still existed nearly one year after discharge
Capital does not love SAIC, "flying" subsidiary, Jet Hydrogen Technology intends to go to science and technology board
Huawei redefines one of the three major communication networks of the underground communication network
Tencent responded to "APP to get ridiculous": Upgrade APP is now downloaded for user rights protection
Gree announced the implementation of the double-holiday work system Dong Mingzhu from the media voice netizen God reply
The approval of Sensetime's IPO gives the metasurverse concept another ride
Netease Cloud Music will soon be listed on the back of 200 million monthly live users how to make money
US media: If it is unable to quickly solve the problem of incomplete behavior in the company, the moving Blizzard CEO will consider resignation
The most popular news this week
Regulation of crypto assets is difficult
Xiaomi Motor settled in Beijing Economic Development Zone in the first half of the first half of the year
Tesla: Super charging network has covered Guangdong Province traffic trunk
Foreign manufacturers make IPHONE 13 Pro with Tesla accessories! Sold price direct retrogenization
Google had planned to launch the tensor chip for pixel phones in 2020
Huawei Heavy Machinery is re-incorporated! Generators except logo exactly
Samsung PCIe 4.0 hard drive upgrade: more heat sinks fully support PS5
New crown latest variament has emerged in early November: New York, USA has a bad feeling
Black Friday us stores face embarrassing situation! Got stuck in the neck
Vehicle positioning signal weak puzzle! To be completely solved by Huawei