IFixit dissolves Samsung Galaxy Fold: glue too much, it is not easy to repai

Samsung's Galaxy Fold Mobile has been released in a number of national markets since the news of IT's October 8th news adjusted. Compared with the previous version, the new Galaxy Fold will be more durable and iFixit has also previously disassembled Galaxy Fold, this time they have brought the latest version of Samsung Galaxy Fold.

Samsung Galaxy Fold is innovative, but on the first-generation product, the design flaw leads to an extended shipment. The cell phone uses a 7.3-inch fold screen of 2152 x 1536, with a pixel density of 362 PPI; and a 4.6-inch Super AMOLED secondary screen with a resolution of 1680x720 and a pixel density of 399 PPI.

In the case of a processor, the Samsung Galaxy Fold is equipped with a high-pass Teflon 855 chip, as well as a 5G version of the high-pass Teflon X50 baseband. The memory is 12GB and the storage space is 512GB.

Compared with other mobile phone products, Samsung Galaxy Fold obviously has many entry points that can be disassembled, including the gap between the screen and the fuselage, and the connection point of the folding hinge between the two parts of the phone. Of course, although it seems easy to disassemble, if it is really disassembled, do not start from these two positions. 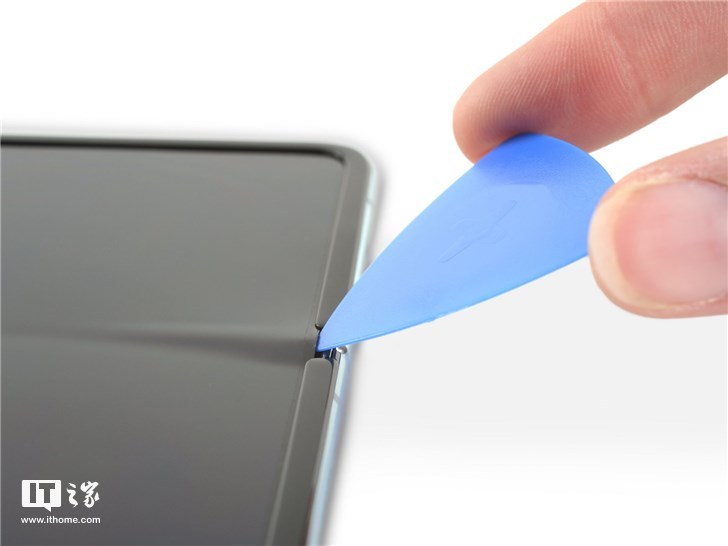 Of course, these two positions are obviously also easy to gray, it is better to use it carefully. 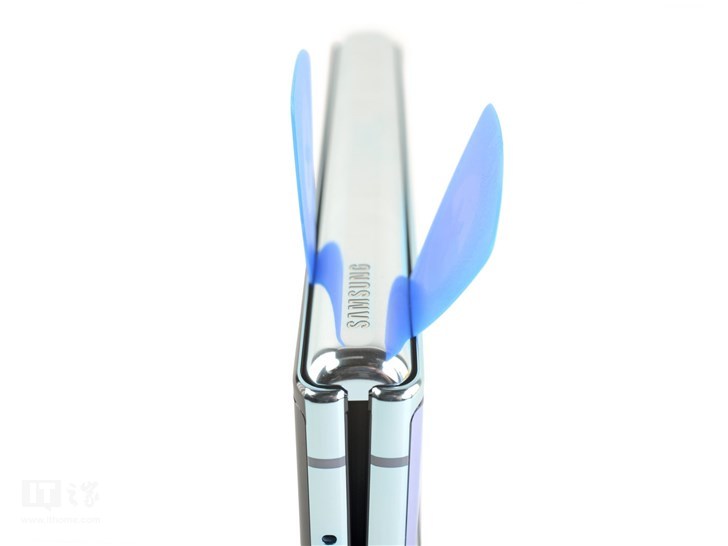 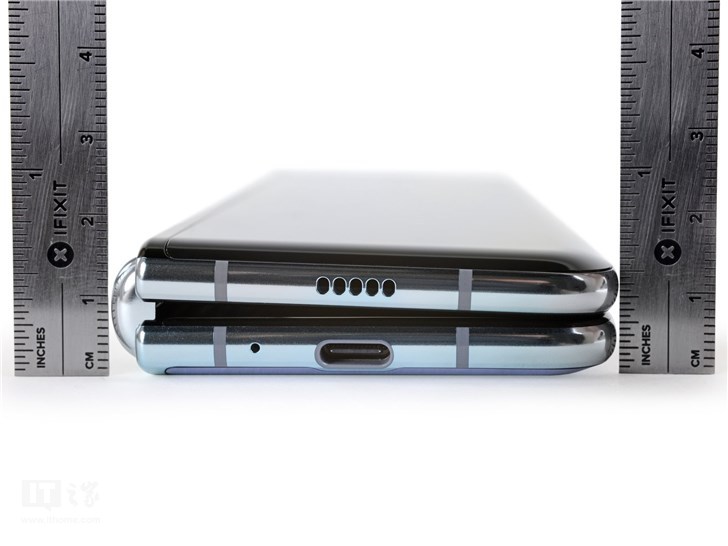 After the launch, Samsung Galaxy Fold mobile phone inside the upper right is a self timer camera, Samsung's 7.3 inch screen is not regular. 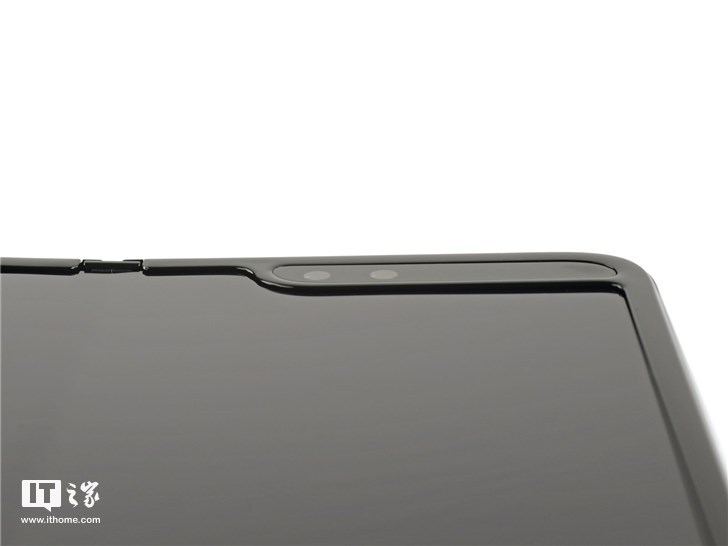 Even if the Samsung Galaxy Fold is folded once, the fold in the middle of the inner screen is also very obvious. 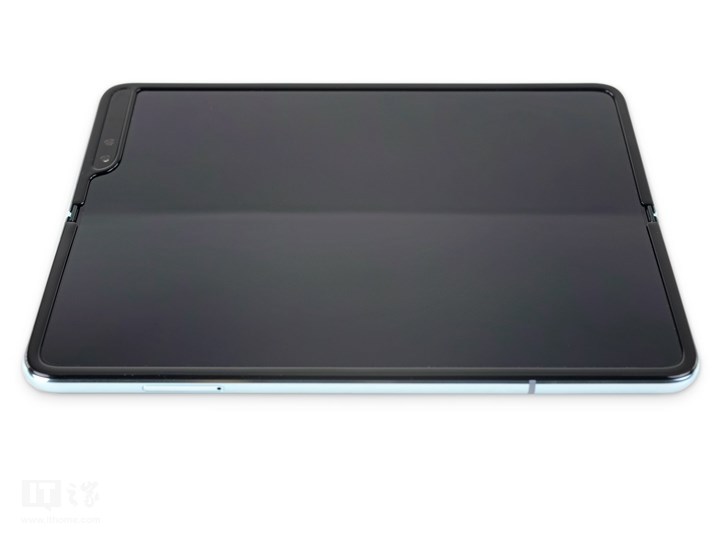 The first step is to heat the outer part of the shell, and the hinge part can not be disassembled directly. Unexpectedly, this glue is not so tight, as long as a little heat can take off the backplane. 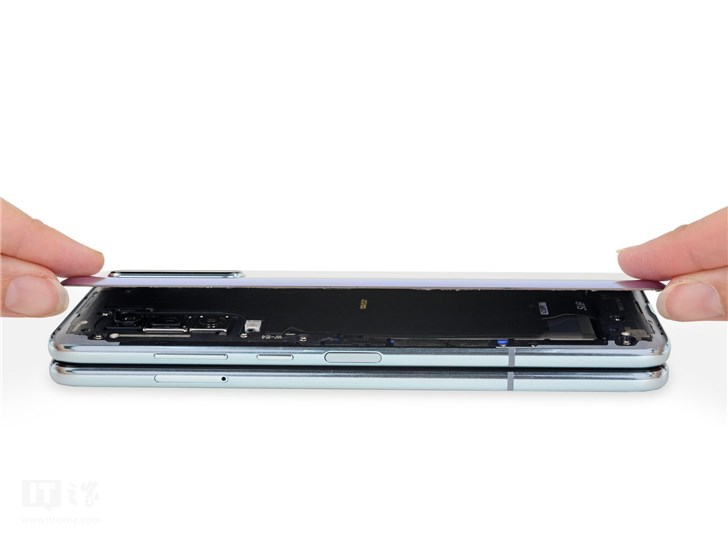 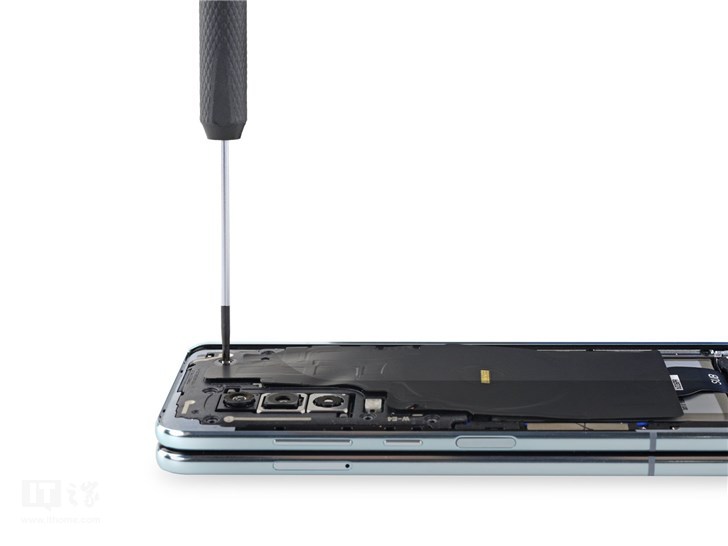 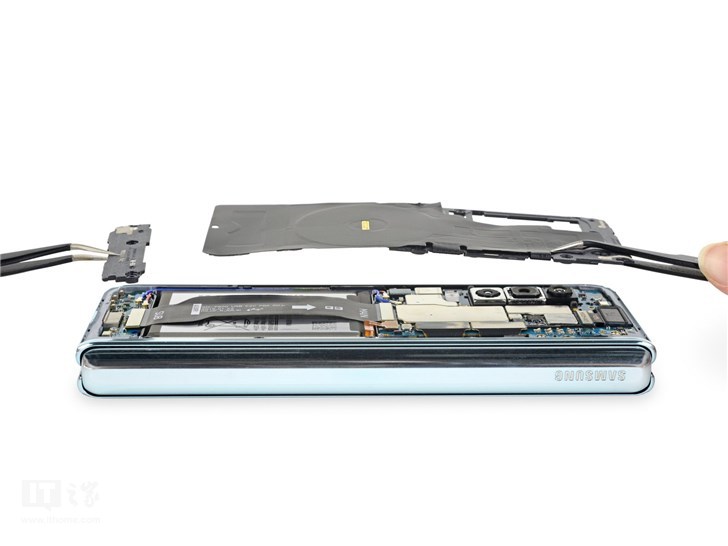 Take off the coil and antenna and we see that Samsung Galaxy Fold is very close to the average phone, except for no loudspeakers and vibrators. 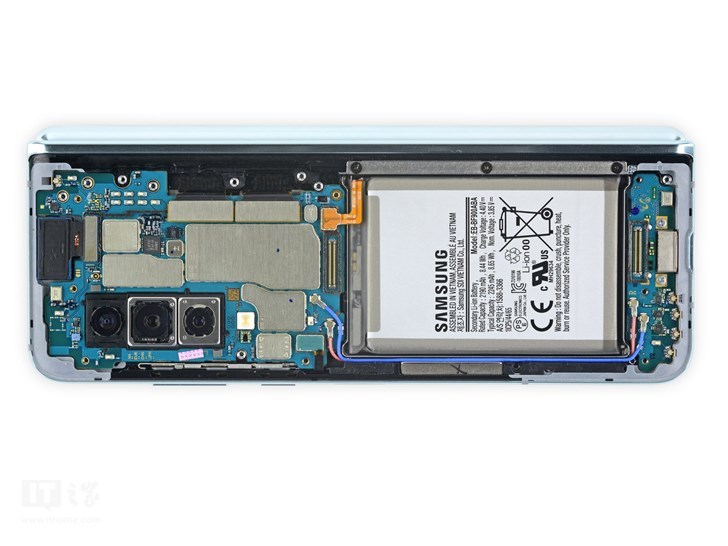 After heating, use the crowbar, pry open and you can see the other half of the motherboard. Be careful not to scratch the OLED screen when you remove the screen here.

The back of the screen is very simple, with only one S6SY761 touch controller developed by Samsung. This can be seen in recent Samsung mobile phones.

There are batteries in both parts, and a lot of adhesive is used between the battery and the phone, and it takes a lot of effort to remove it. 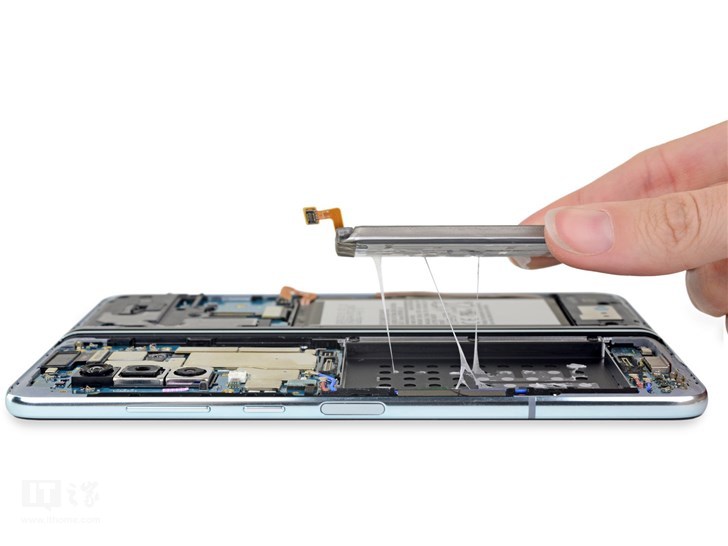 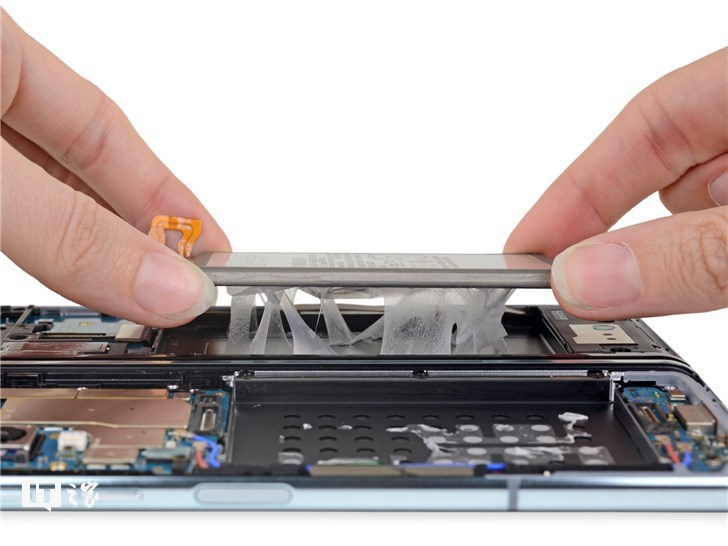 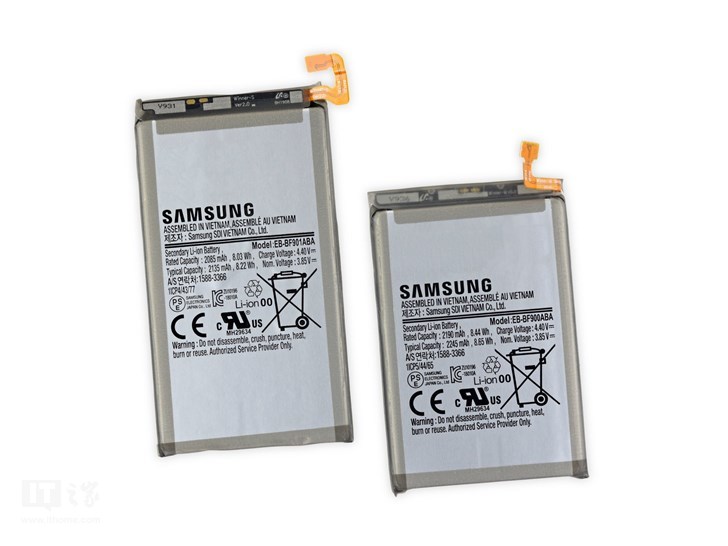 There are six cameras inside the Samsung Galaxy Fold cell phone, which is only seen on the Huawei P30 Pro. As the internal space of the mobile phone is relatively large, the main board can have a lot of things. 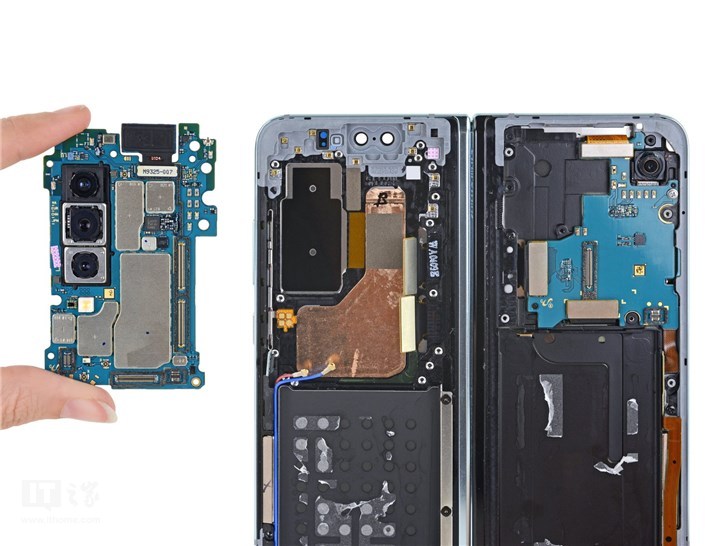 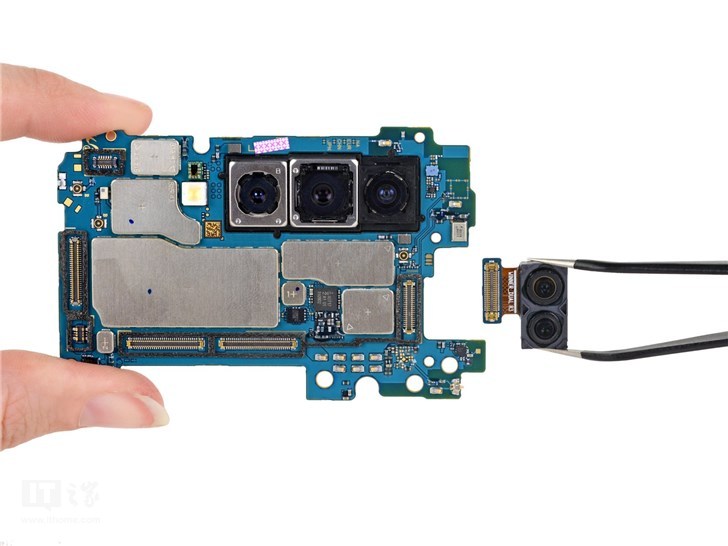 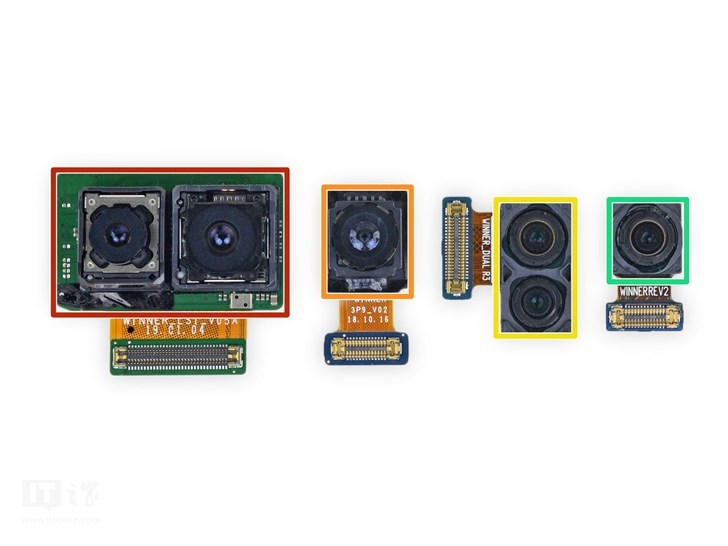 The left motherboard part is still relatively clean, the wiring part is concentrated on one side, while the other control chips are on the other side. 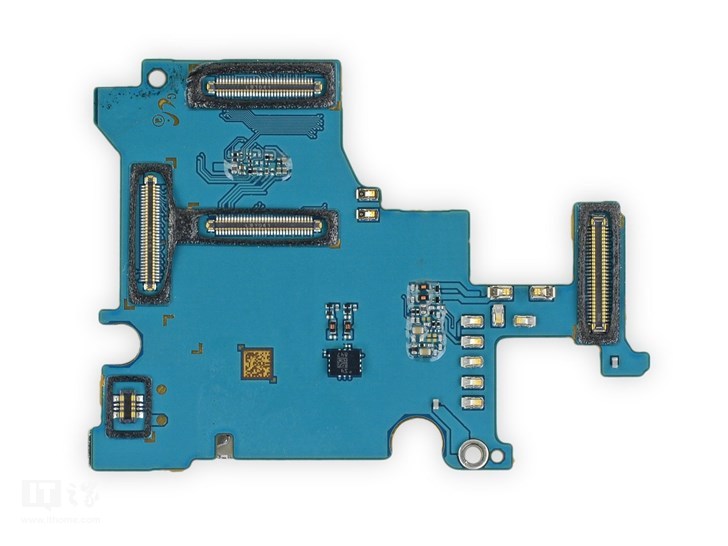 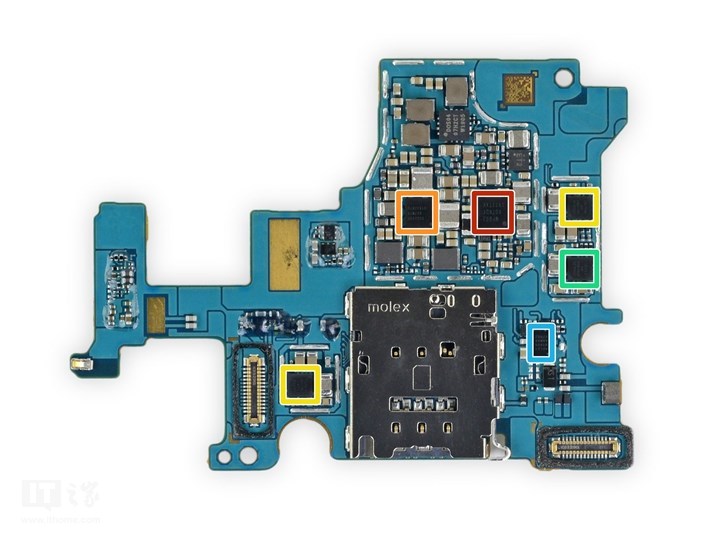 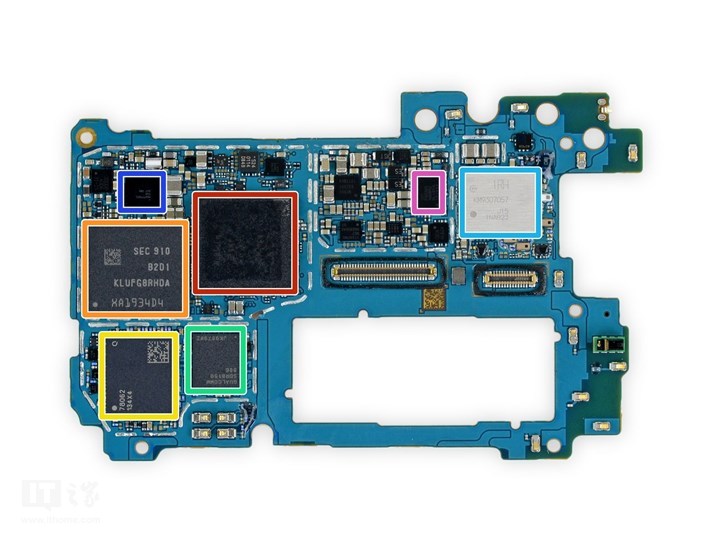 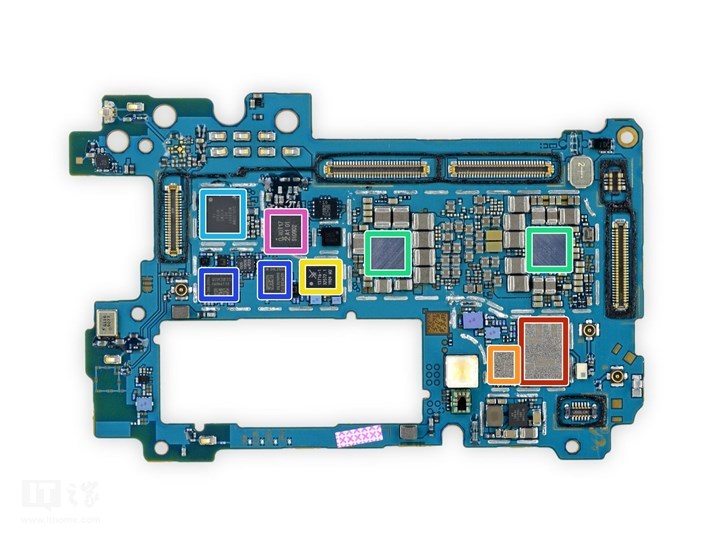 The motherboard is relatively easy to maintain, but the flexible screen can be said to be a big problem in disassembly.

The protective strip around the flexible screen is only bonded with glue, and it is not troublesome to disassemble it, but it does not rule out the problem that it will fall off for a long time. After disassembly, the collapsible OLED screen appears in front of us. The edge of the OLED screen is about 2 mm wide.

Next, we need to carefully separate the screen's adhesive with pry pieces so that the screen can be separated from the mobile phone frame.

There's an extra wide line on the left side of the screen after you take it apart. You should be more careful here. When we are here, Samsung Galaxy Fold is basically the most difficult part to achieve. 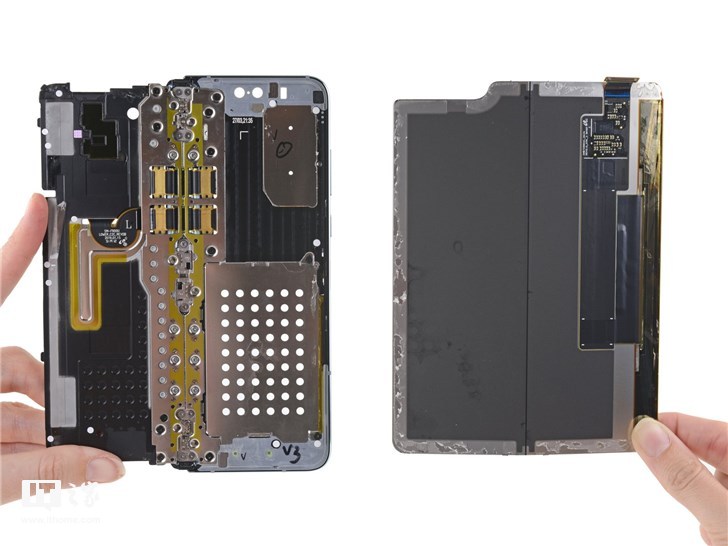 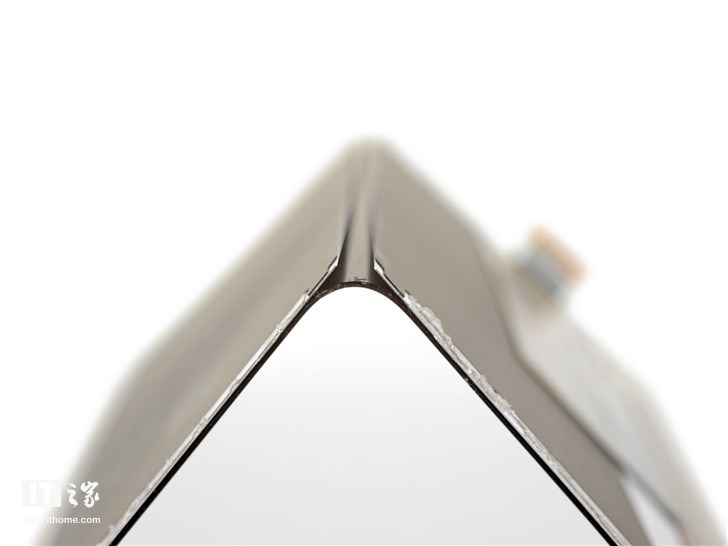 When the screen is removed from the fuselage, the creases on the screen are less obvious. Previously, the polymer film on the surface of the original Samsung Galaxy Fold was torn by users by mistake. This time, with the border protection, it is not so easy for users to tear it. 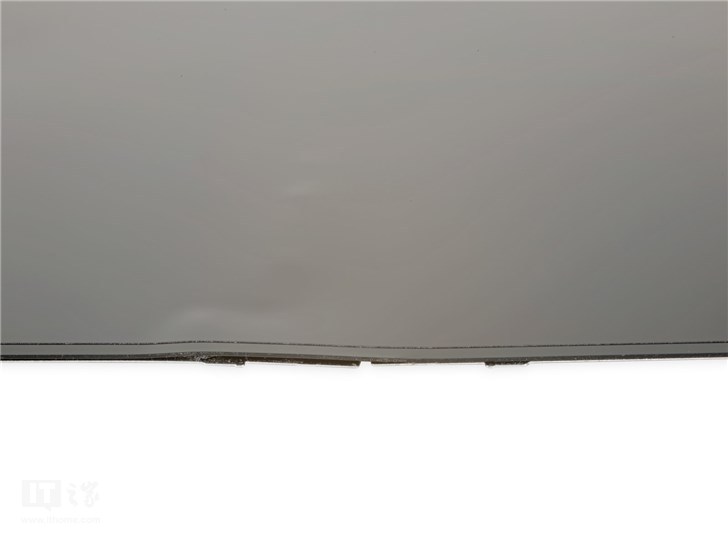 Of course, tearing it off means that the folding screen of Samsung Galaxy Fold is completely cold, and we are advised not to try. 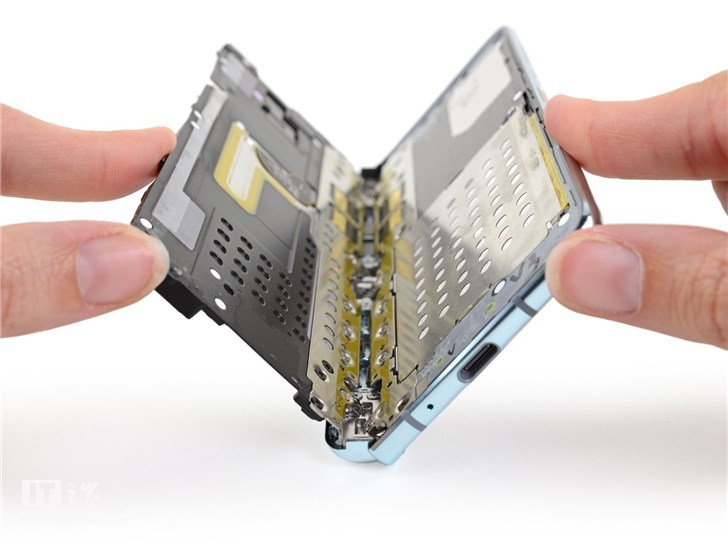 There are also two hinges fixed to the central axis at the top and bottom, with some space in the middle to absorb the torque caused by the flip. 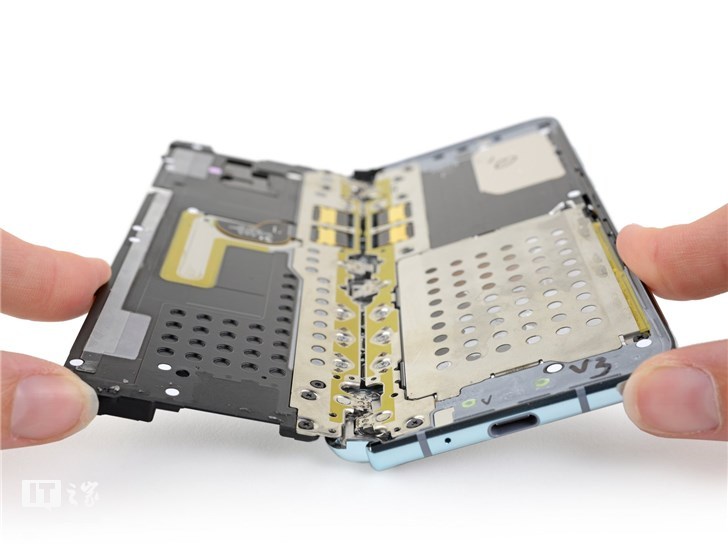 The hinges use the gear structure as a whole to ensure that the two part of the cell phone is synchronized. In addition, two flexible lines are buried in the hinge area to ensure the stability of mobile phone usage. 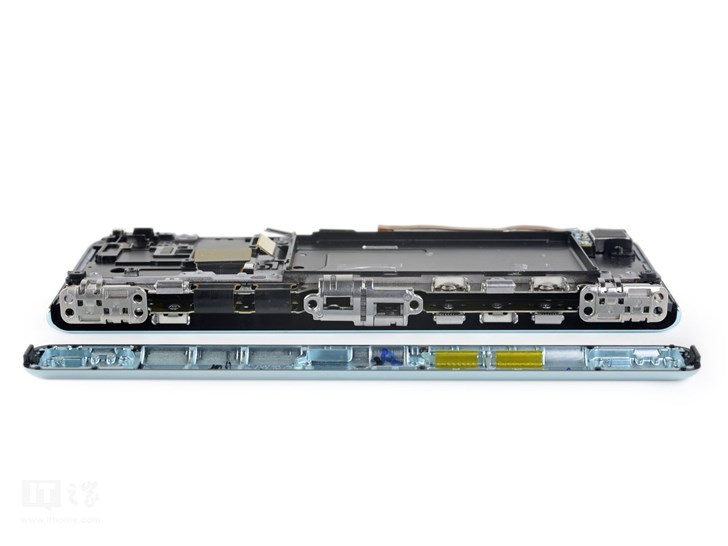 The following is a demo of the Samsung Galaxy Fold hinge section:

On the whole, Samsung Galaxy Fold looks very special. Of course, this unique shape is also very fragile. Although Samsung has adjusted the shape of Samsung Galaxy Fold, it is indeed a difficult problem to repair and disassemble it compared with other mobile phones. 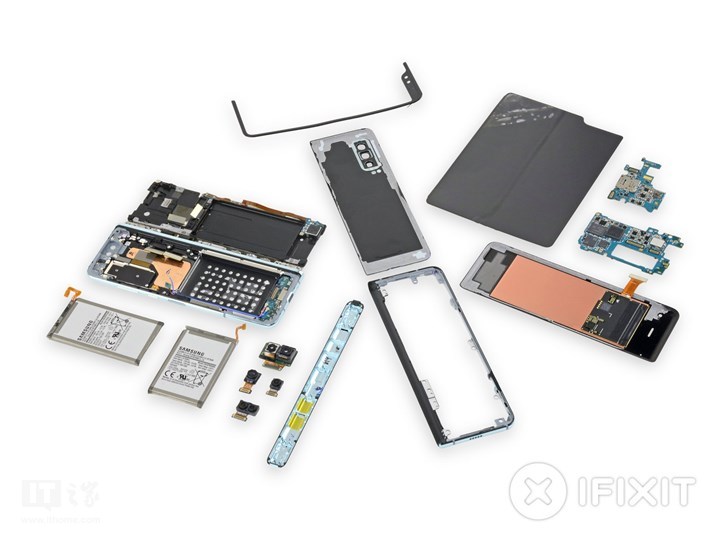 In addition, the internal use of glue, which makes maintenance difficult. The hinge part will wear and tear over time. It's very troublesome to replace this part. The main screen can't be protected by protective film, so once something goes wrong, it will cost a lot of money to repair. Fortunately, many of the contents of the motherboard are modular design, which is relatively easy to replace. Finally iFixit gave Samsung Galaxy Fold a 2-point repairability score.

Related news
What is the tragedy of Samsung Galaxy Fold? iFixit gives their opinion
Samsung Galaxy Fold atypical evaluation: it is better to talk about folding screen metaphysics
What should Apple learn from the failure of Samsung Galaxy Fold?
Next AirPower? Samsung Galaxy Fold has a lot of fate
New release date approaching: Samsung restarts Galaxy Fold official website reservation
Refurbishment! Samsung's new Galaxy Fold fold-screen mobile phone
IFixit dissolves Samsung Galaxy Fold: glue too much, it is not easy to repai
From huanzhugge to street overlord: the nostalgic artifact of the post-80s Samsung Galaxy fold alternative experience
Samsung Galaxy fold 2 exposure: higher screen share, more extreme
Samsung cooperates with Corning to develop folding glass: Galaxy fold 2 launched!
Hot news this week
Tencent Music rose more than 3%, and its average monthly revenue of more than 10,000 musicians in 2021 doubled, and NFT will generate revenue for musicians
China Telecom and Huawei jointly released "Super Time Frequency Fold" 5G Determine Network wireless key technology
CNKI is a wholly foreign-owned enterprise? A-share listed company Tongfang shares responded in this way...
Apple has increased incentives in China to up to 15,000 yuan after cutting the trade-in price in the US
Washing your nose with salt Water may Prevent COVID-19, experts warn
"Tmall responds to over 300 minus 50" to the hot search, netizens: Don't engage in Olympiad, less routine more sincerity
Gree Electric has nothing to do with Gree Real Estate! Dong Mingzhu reiterated that he did not do finance and real estate
Xiang responded to Tesla's lawsuit by saying he was dissatisfied with tesla's arrogant attitude but not defamatory
Microsoft has launched an adaptive mouse for people with disabilities that can be assembled as many parts as they want
After the release of the 2999 yuan new machine, it instantly became the hottest model in the headlines: dominating the list all night
The most popular news this week
The domestic screens are rolled to the 2K screen. Why don't Apple follow the roll?
Experts remind: Do not put disinfection pieces to the sewer, it is useless and harmful to disinfection outdoor outdoor disinfection
Flying Pig's new "Yunyou Museum" can watch the live broadcast of nearly 20 museums in China
DEEPMIND training more than 600 tasks such as chatting, playing games, and accumulating wood
4K display uses 240Hz for the first time! Samsung's new flagship display is coming
Accidentally found a new track! AMD Rayon 7 6800U batch arrived
Better iPhone signal! Apple has released a new official version of iOS
iPhone security big overturn, built-in chip low-power operation, after shutdown can still be tracked location
Hong Kong stocks popular technology stocks rose sharply: JD.com rose more than 9% Ali rose more than 8%
Yu Minhong: Strive to open source while reducing costs quickly, or New Oriental will die