On October 7th, from China and Britain, the study team published an academic paper called the "ultra-low emission standard" in the journal of Nature Energy. After a case study of China's air data from 2014 to 2017, It is concluded that, since 2014, China's ultra-low emissions (ULE) modification measures for coal-fired thermal power units have achieved remarkable results.

The results show that the emissions of SO2, NOX and other particulate matter from all types of thermal power units in 2017 are significantly lower than those in 2014, with the decreases of 65%, 60% and 72% respectively, leading the world and far below the world average level. This means that the target of ultra-low emission renovation has been overfulfilled, and the overall emissions of sulfur dioxide, nitrogen oxides and soot from thermal power plants in China have decreased by more than 60%.

Since September 2014, China has formulated a policy of "ultra-low emission transformation" for thermal power coal-fired units, the main source of pollution emissions, and plans to complete the transformation of 580 million kilowatts of coal-fired units by 2020, accounting for 71 percent of the total installed capacity in 2014. 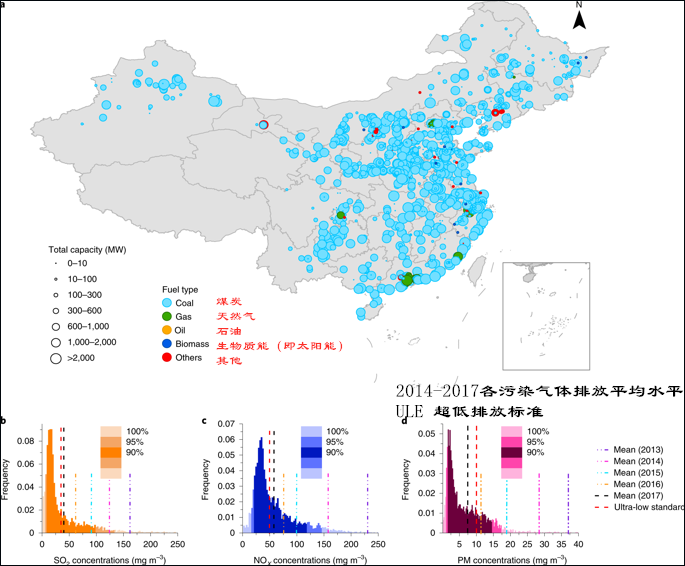 Distribution of power generation energy in China and comparison of average emissions with ULE standards from 2014 to 2017 (paper chart, the same below)

(Science Daily), an American academic media, published an article on the same day, "China is steadily meeting its 2020 emission target," reporting on the academic paper published in the journal Natural Energy.

In 2014, China formally introduced a policy of ultra-low emission (ULE) standards aimed at retrofitting coal-fired generating units to limit emissions of sulphur dioxide, nitrogen oxides and other particulates to 35, 50 and 10 mg/m3, respectively, according to the Science Daily, citing the paper.GasTurbine unit standard. This paper describes China's policy as "ambitious".

The results show that, despite the continuous growth of power generation in China, the emissions of SO2, NOX and other particulate matter from all types of thermal power units in 2017 decreased significantly from 2014, by 65%, 60% and 72%, respectively, from 2.21 million tons, 3.11 million tons and 520,000 tons to 770,000 tons, 1.26 million tons and 140,000 tons, respectively. This indicates that:2In 2017,The target of ultra-low emission renovation has been overfulfilledIn China, the emissions of sulphur dioxide, nitrogen oxides and soot from thermal power plants decreased by more than 60%.

The study found that, benefiting from the implementation of strict emission monitoring system and effective economic incentive mechanism and the promotion and upgrading of core ultra-low emission technologies, China had successfully transformed 590 million kilowatts of existing coal-fired power units into ultra-low emission units by the end of 2017, and exceeded the policy targets ahead of schedule.

Among them, the eastern region and large-scale units have the strongest policy pertinence, the largest proportion of installed units, and the most significant emission reduction efficiency; the western region and small-scale units have relatively broad policy pertinence, large space for technological improvement, and still have great potential for emission reduction.

The research team said that the successful implementation of ultra-low emission transformation in the thermal power industry is of great significance. Its emission reduction effect will effectively inspire the morale of haze control, and successful experience will directly promote the realization of haze control goals.

According to the Science Daily, this means that if all thermal power plants in China can meet ultra-low emission standards by 2020, China is expected to achieve further emission reduction. 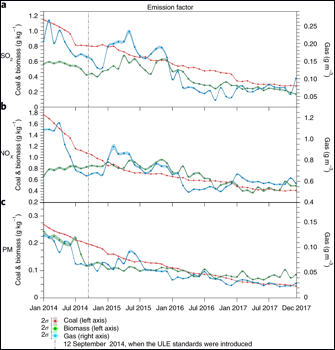 Emissions of polluted gases decreased year by year from 2014 to 2017, and ULE standard was adopted in China in December 2014.

The Sino-British Joint academic Group built a network of continuous emission monitoring systems (China) covering 96 to 98 per cent of China's thermal capacity for the first time between 2014 and 2017.

In addition, according to data from the newly established Continuous Emission Monitoring System (CEMS), previous methods for estimating China's electricity emissions have overestimated at least 18% and, in some cases, 92%. This error is explained in this paper: the data of previous studies originated from the pre-use of CEMS monitoring system, i.e. the pre-introduction data of ultra-low emission standards were assumed based on the pre-study principle, while the post-study principle was adopted in this study, all of which were real-time data.

The panel emphasized the importance and accuracy of ex post assessment, and said that CEAP system is currently open to the public, and will continue to present, organize and analyze emission reduction data from coal-fired thermal power units in China, hoping to provide technical and empirical support for other countries. 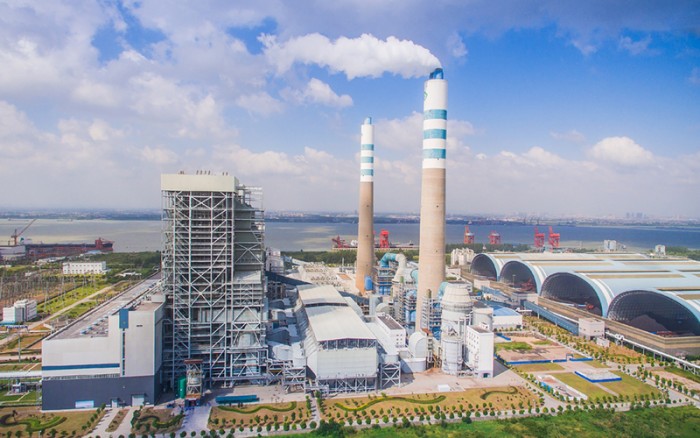 Dr. Zhifu Mi, one of the co-authors, from the Bartlett School of Construction and Project Management at University College London, concluded the paper by saying: "This is encouraging news for China and other countries that want to reduce power pollution. Coal is the most widely used fuel in China. It is very challenging to reduce the number of thermal power plants in a short time.However, these significant emission reduction results show that it is technically and economically feasible to maintain ultra-low emission standards for power plants, which is an important step in reducing air pollution."

Li Ganjie, Minister of Ecology and Environment, said recently that "the proportion of ultra-low emission transformation of thermal power has reached more than 80%", "the proportion of coal has been very high in the past, about 70% in 2011 and 2012, and 59% in last year, which is not easy". At the same time, Li Ganjie said that the situation of blue sky defense and air pollution prevention and control is still grim, and it is still in the stage of "feeding on the sky". We should have patience and perseverance in fighting a protracted war, including sometimes looking at problems objectively and with a common mind.

Related news
New version of energy ring released: the holes dug in the screens of Xiaomi 10 and glory 20 can also display the ring electricity
Glory high-tech products help team China's national team set out to show China's business card to the world
Hot news this week
Lu Jian, president of linkedin China, responded to rumors of the "closure of linkedin China" by saying that the company will increase its investment in China even if it does not reduce it
Samsung Motor announces end to flexible printed circuit board RFPCB business Without affecting iPhone production
I can't play! The official solution to the bug in Chinese Paladin vii was provided
The video asked Net-a-Lago to apologize
On New Year's Eve, a trio on a business trip will celebrate the lunar New Year in space: a first for the Chinese
The United States exposes the higher civilization of the universe: human beings are inferior to good ones
Rolls-Royce China SAO operation caused dissatisfaction wang Sicong message not to buy: official apology
Xiaomi appointed Li Xiao Shuang as a vice president of Xiaomi Motor, CFO Lin Shiwei, and the CEO of Stars
Bytes beat 9 billion yuan to acquire VR companies, then invest the chip, or to accelerate the layout "Yuan Universe"
Xiaomi intelligent clean ecological chain enterprises to pursue technology to complete 3.6 billion yuan C round financing
The most popular news this week
Tesla Q3 earnings reading: Record net profit on revenue Pressure on new Chinese cars is coming
Microsoft CEO NADELLA is most concerned about three things: ubiquitous computing, AI big model and virtual online
Nearly 80% of teenagers in Taiwan think cyber bullying is a serious problem, according to a survey
What opportunities and challenges brought to the financial industry?
Jia Yueting is paying back the money again! Faraday's future former employees in China receive a pay rise
The storage chip faucet is 119 times the first three seasons, the chairman reporter is born, "cattle scattered" did not lose the position.
The liabilities are still 95 billion Jue Ting pays, and FF China's front employee will collect salary and consistent with the in-service.
Wechat iOS version 8.0.16 release: Voice call interface will display the other party's circle of friends only after clicking
Interbrand world has a top 100: Apple, Amazon, Microsoft, Google, Samsung
Facebook is changing its name next week: But Mark Zuckerberg hasn't decided yet