The biggest difference between Raja: independent graphics card and N / A, chief architect of Intel, is it!

Recently, Raja Koduri in China gave an interview with a number of media, including the hardware world, to talk about Intel's strategy and product planning.

Raja again emphasizes Intel's long-standing transformation concept that we are rapidly moving from PC-centric era to data-centric era, in which heterogeneous computing is crucial.

At the same time, in the golden age of artificial intelligence development, the modern computing applied to artificial intelligence has increased more than 1 million times in the past five years, which is unprecedented, and the future growth can be said to be endless, and we are facing the connection of hundreds of billions of devices. 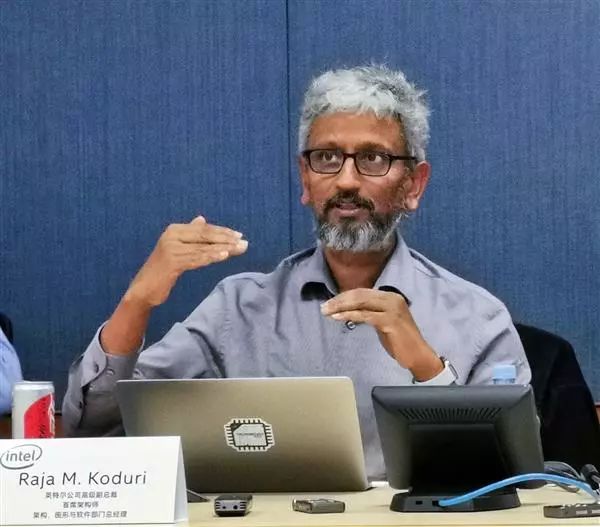 In the course of interactive exchanges, on the landing of the six pillars of technology strategy,Raja emphasizes the importance of the Chinese market, especially the software deployment of Intel in China has always been an important advantage. At the same time, it is also strengthening the coordination and integration between software and hardware. Only in this way can the development of the Chinese market and the growth of the industry as a whole continue.

At the same time, Intel's team of engineers in China is also very strong, which is an important advantage of Intel's continuous development in China, which is very consistent with Intel's recent proposal.。 Intel will take the Chinese market as a very important consideration for any new products in the future. 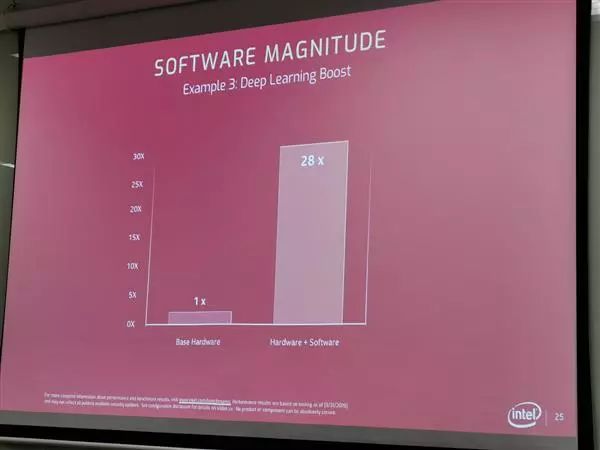 In terms of the most basic architecture,Intel now advocates the combination of SVMS, that is, scalar (Scalar), vector (Vector), matrix (Matrix), space (Spatial), corresponding to CPU,GPU,FPGA and accelerator respectively, and their combination methods are various. Intel's strategy is to encapsulate all these schemas.

From Intel's point of view, CPU is still the most important architecture and the most common one. Intel will continue to improve CPU performance and maintain its position as the strongest computing architecture.

Intel has been very successful in the field of FPGA, and has launched many important products. In addition, accelerator is also a very important driving point of Intel. They are more energy efficient and flexible.

Raja points out that whether customers need high performance or low power consumption, or are sensitive to cost, Intel has a complete product line that can meet different needs, and hopes to achieve a simplified process, through a unified software stack, unified API to meet all the needs of customers, which is what customers want: simpler.

to this endIntel builds oneAPI, to simplify and unify the innovation of cross-SVMS architecture from the software level by unifying and simplifying programming across architecture, and releasing hardware performance to the greatest extent by software, which can bring higher production efficiency and uncompromising performance to developers.

The one API will release a developer test version in the fourth quarter of this year, with more details. 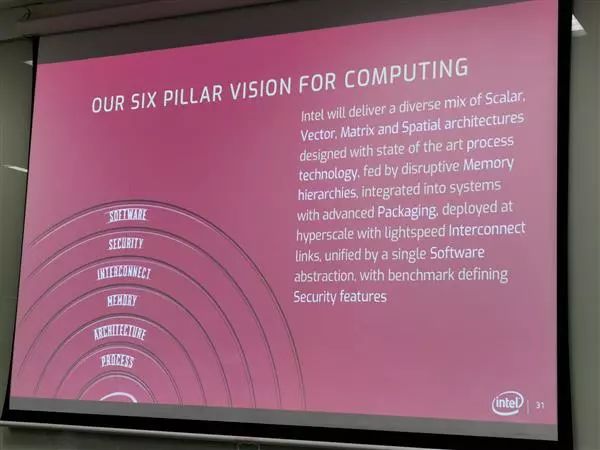 In the future product planning of Intel, the Xe architecture independent video card, which will be launched in 2020, is undoubtedly the most attention, and it is also a key topic of this exchange.

Raja points out thatIntel re-developed high-performance graphics cards in 2017, will be launched in 2020, which faces a lot of challenges, the biggest is to prepare mature software, there is still a lot of work to do. Intel has developed a good software for verification. CPU also has excellent historical experience and technical accumulation. It needs to learn from independent graphics cards, especially data center products.

With regard to the specific features and advantages of the Intel Xe GPU architecture, it will have to wait until the fourth quarter release, but Intel has announced one of the features of the Xe architecture, that is,At the same time, it includes two micro-architectures, one for high performance and the other for low power. At the beginning of the design of one API, Intel hoped to give full play to the best performance of Xe architecture.

Intel Xe's two microarchitectures are considered separately for data-center high-performance computing and consumer-level games, and the relationship between them is delicate, and there have been lessons in history.

For example, the top GPU products used in data centers will provide all functions, can achieve very high accuracy, including ray tracing will do very well, and in the low-end areas, there will be better for power consumption, efficiency optimization.

When it comes to light pursuit, it is undoubtedly one of the hot topics at the moment. Raja points out thatIntel is also a veteran player in the field of light tracking technology. It has invested a lot in the past decades and has a lot of experience.

What may not be known is that Intel has always been a leader in chasing technology throughout the Hollywood film production chain, using Intel's CPU and software for the past 10 to 15 years, and games are just one aspect of light pursuit.

For the next development of optical tracking technology, especially in the application of games, Raja stressed that it is necessary to first understand how the optical tracking technology that has been used for content production is realized and what experiences can be used for reference in GPU. Intel will introduce more consistent software solutions to meet the needs of different application scenarios by creating different application scenarios around content.

Different optical solutions of different vendors, based on different architecture, will have significant differences in performance, and will be affected by different workload. The workload and architecture are diverse,Intel's goal is to be the best in every area and to work closely with many software vendors in the industry.

Intel recently launched the Optical pursuit rendering Kit under the oneAPI framework, which has been used in a number of games, including Tank World, to provide excellent optical pursuit performance support.

What's the difference between GPU products and NVIDIA and AMD? Raja says the biggest difference is that Intel has the ability and confidence to provide a more consistent user experience, no matter on any device, which the other two can't do at all.

Intel promised with confidence,Over the next 10 years, we will see more structural innovations than we have seen in the past 50 years.. Let's wait and see! 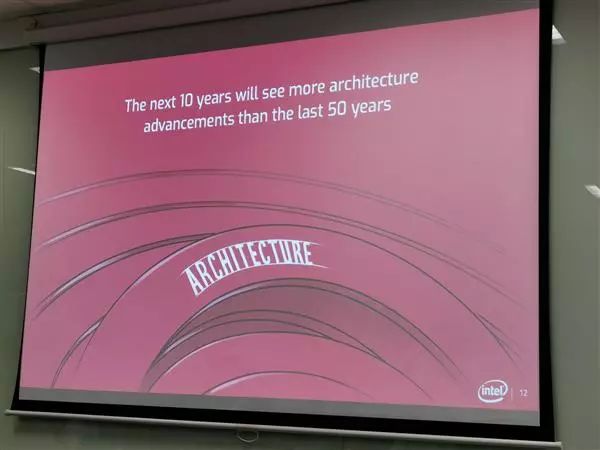 By the way, AMD's ray-tracing scheme is based on ProRender for creator and Radeon Rays for developer. The next generation of RDNA architecture will introduce part of the real-time game-oriented ray-tracing effect on hardware for the first time. In the future, we hope to achieve full-scene ray-tracing through cloud computing.

Sony made it clear when it announced PS5 a few days ago that it would support optical pursuit, and it used the AMD RDNA series architecture GPU..

We know that NVIDIA, Intel and AMD are all based on Microsoft DXR specification, regardless of software or hardware. But when AMD is available to game players is not clear. Maybe the drivers and codes are just for developers to reference and prepare.

The RX 5700 series of RDNA architecture has only been released long ago, and to see the next generation of RDNA should be in a year's time, just in time for Sony PS5 to appear.

Of course, AMD may be able to open up light tracing on existing RDNA architecture products, but without the efficiency of hardware unit support, it is conceivable that NVIDIA GTX 16 series is an example.

In any case, AMD's game is already in full swing, and so on. 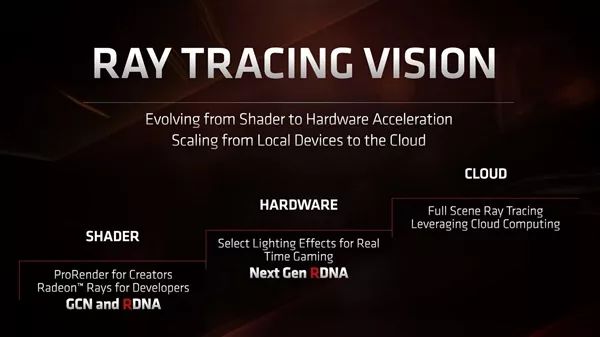 Related news
Raja, Chief Architect of Intel: There will be more optimization and upgrading of computing architecture in the next 10 years than in the past 50 years.
The biggest difference between Raja: independent graphics card and N / A, chief architect of Intel, is it!
Interview with Raja koduri: GPU computing's long cherished wish to realize oneapi unified heterogeneous computing at Intel
Amd RX 6000 overturns RTX 30 Intel vice president Raja sends congratulatory message: it's not easy
Raja koduri shared Indian philosophy and warned netizens: don't look for graphics card disclosure
RTX 3070 performance of Intel gun pick A/N two: graphics card price is expected
Hot news this week
The developer of the dating app Tinder has reached an agreement with Google over billing rules for its app store
Still did it! Canada has banned Huawei and ZTE from participating in the country's 5G network on "national security" grounds
Red Elf Lightning erupts in the Himalayas Spectacular Spectacle: Experts Reveal What Exactly Is This?
The founder of the Internet Quick Hand Su Hua was taken away for investigation, and the fast hand responded: the news was not true
Wang Xiang, president of Xiaomi, explained that a shortage of low-end chips is a major challenge in overseas markets
Or for Studio Display Pro, the release of Apple's 27-inch Mini LED-backlit Display has been delayed by October
Tencent Q1: The business service business has "slightly decreased" year -on -year, and resource centralized video cloud and network security | View financial report
One picture to understand! Blue Factory has issued 3 new machines in a row: self-developed chip blessing, the narrowest lower border
Sony released the active noise-canceling headphones WH-1000XM5, equipped with 2 chips and 8 microphones
Tencent established a smart technology company in Chengdu, and its business scope includes Internet data services
The most popular news this week
Xiaomi's first Leica flagship! Xiaomi Mi 12 Ultra's latest appearance map: the screen ratio is amazing
The founder of Xiaopeng Auto! He Xiaopeng uses "Keda Duck" to ask for help online
Not afraid of merchants "first rise and then fall"! 618 Taobao launched a new feature: one-click refund of the price difference
How does the Internet make People Copy each other
Fed Vice Chairman: The future digital dollar may complement the coexistence of stablecoins and commercial bank currencies
ZHANG Pingan, CEO of HUAWEI CLOUD: The value of data governance in China has not been fully tapped Data and AI should be accelerated
Shenzhen Atmosphere! The sales price of mobile phones, computers and other products is subsidized by 15%
Microsoft shows third -party components: Win11 chicken rib function is saved
No need to grab it! Sony announced an increase in PS5 shipments
Audi advertising poster photos only sell for 8 yuan? Photographers question the unreasonable use of the photo purchase