We expect the $29.6 billion-a-year business database market to shrink by 20% to 30% by 2021, arguing that Oracle will not be able to transform revenue sources fast enough (from traditional business databases to cloud-based ordering) to offset the downturn in the market, which is a traditional core of Oracle's revenue. 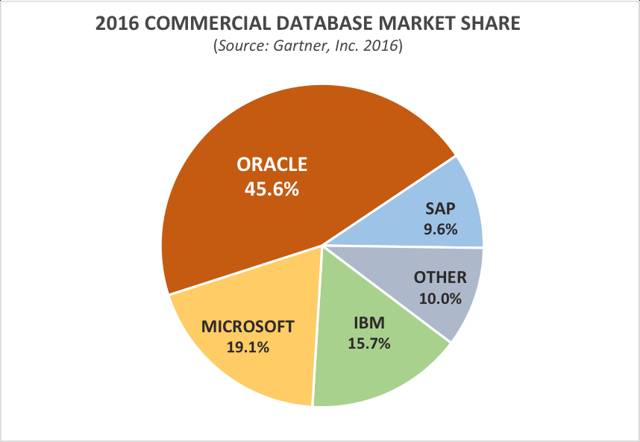 In the past two decades, the commercial database market is still one of the most stable and sticky areas in the IT industry, with Oracle, IBM and Microsoft sharing 80% of the market share. However, we believe that the pace and magnitude of the decline in this sector may surprise many investors.

Deflationary pressures that have affected the database market are just beginning to be reflected, including:

Revenue from database software accounted for about 36% of Oracle's total revenue in fiscal 2016 and about 55% of its operating profit. 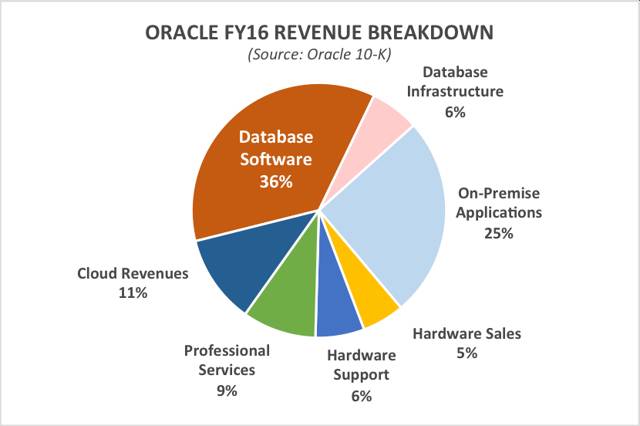 The company's projected decline in database revenue is clear, as well as its revenue from in-house applications, which accounted for about 25% of total revenue and 39% of operating profit in fiscal 2016. 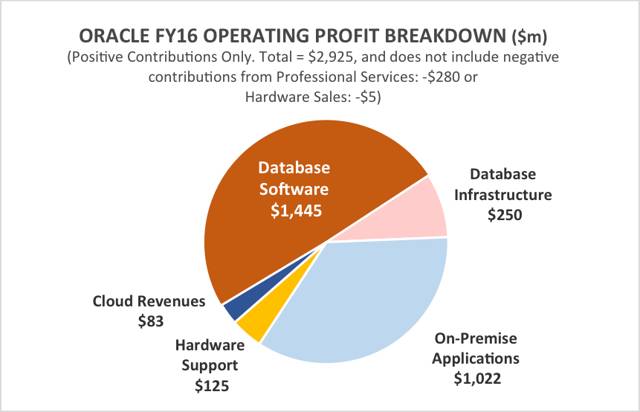 Microsoft and IBM will be hurt only slightly, as database software accounts for only about 5 per cent of each vendor's total revenue.

Specifically, we believe that Oracle needs to implement a more radical, faster organizational and cultural transformation and become a family.

For those who are more interested in technology, the following is a historical explanation of five interrelated trends that will collectively lead to a 20 to 30 percent contraction in the business database market by 2021.

With the exception of several initial SaaS products based on Oracle databases (Salesforce.com,NetSuite and Oracle itself), it is difficult to find a SaaS provider that uses any commercial database. For companies founded after 2005, the figure is almost zero.

Therefore, we believe that enterprise migration to SaaS / cloud is a very unfavorable trend for business database revenue. In addition, we are still in the early stages from client / server to SaaS / cloud. According to different research companies, the migration is only 10% to 25% complete, just beginning to affect more important mission critical applications (such as ERP), which are more likely to run on higher-end SQL databases (including those of Oracle and IBM, and a small part of Microsoft).

After SQL became the standard in 1987, its position in defining how to organize, search and sort data has been unshakable for 20 years. However, by the middle of 2000, the major technology companies began to encounter the limitation of SQL database in dealing with the absolute quantity and different structure of data. They wanted to keep, browse, analyze data and provide data to users / customers as needed.

Amazon, Google, LinkedIn and Facebook each develop and implement their own database software, which breaks the constraints of SQL standards and solves their own expansion problems.

In addition, each company soon released an open source version of the database. As a result, they developed a number of new open source databases in 2008 and 2009, leading to Guy, author of the next Generation Database

In view of the rapid growth of the number and types of data - this is due to the more abundant social media content, more social media users and the dramatic increase of automatically acquired Internet of things data. In addition, in view of the growing desire of enterprises to analyze the acquired data, we believe that the number of occasions suitable for NoSQL will soon far exceed that suitable for SQL.

The rise of these new use cases will promote large enterprises to adopt more open-source NoSQL solutions, and as a result, commercial SQL databases have become victims.

SQL database and schema on write do not follow Moore's law. Generally speaking, NoSQL databases need much more processor, memory and storage resources than SQL databases, even considering the fact that they relax many constraints on how SQL organizes data. Although NoSQL database architecture existed as early as 2005, at least in theory, there was not enough processing power, memory capacity and storage space at that time, so that they could be put into practical application outside the academic field.

In the 1980s and 1990s, when processor / memory / bandwidth resources were relatively scarce, it was actually necessary to comply with stricter SQL standards in order to ensure the performance and reliability required by enterprises to migrate applications from mainframes and minicomputers to more distributed, network-dependent client / server architecture, especially those that are more important mission-critical applications.

There is a price to be paid for the acceptable performance and reliability of SQL, mainly due to:

However, with the passage of time, Moore's law promotes the improvement of processing capacity, memory capacity and speed, storage capacity and speed, and network throughput, which makes users no longer need rigid SQL standards and write time mode methods, which will only continue. Therefore, with every Moore's law cycle, SQL and its resource-saving write time pattern method lose more and more competitive advantages, while NoSQL and its resource are relatively inefficient, but the extremely flexible read time pattern method becomes increasingly free from the constraints that hinder its adoption.

When SQL becomes standardized, traditional hard disk (HDD) is the only cost-effective storage medium that can be accessed in real time. Therefore, many basic codes written to SQL database software are designed to bear the disadvantages of HDD, such as slow speed of reading the requested data and transferring the data to memory, high failure rate at least compared with the main solid-state components of the system (such as CPU, memory and network throughput). Now that SSD is rapidly becoming a cost-effective alternative to HDD, the design of traditional SQL database software, and of course most of the code, is now unnecessary - and the compromise was made to accommodate a much slower HDD.

By contrast, many NoSQL databases have been developed to maximize the use of SSD storage media, which may be updated to take full advantage of more novel non-volatile memory technologies, such as Intel / Meiguang's 3D xPoint, which is on the market. We believe that, given the strong need to continue to comply with SQL standards and maintain their backward compatibility, SQL database vendors are unable to optimize their code for SSD as quickly as many open source projects, which puts them at a competitive disadvantage-this is Clayton

We are seeing more and more software tools and services designed to help enterprises migrate from commercial SQL databases. Over time, even the most important mission-critical applications running on Oracle or IBM databases are likely to be increasingly surrounded.

Although SQL databases from Oracle, IBM, Microsoft and other giants will survive for many years in some enterprises - again similar to mainframe, they will become increasingly marginalized and their costs will be reduced as much as possible. We see that many of these tools have become more and more mature in the Hadoop ecosystem, which has many methods to integrate with the SQL database, and / or put the SQL interface and query function on the NoSQL database. In our view, this scene is similar to the many methods that appeared in the early 1990s to integrate mainframe applications with PC and client / server applications.

Related news
Is the Ali database really better than Oracle?
Amazon completely removes Oracle Database: migration completed
Thinking behind AWS abandoning Oracle
The death of commercial database: Oracle facing difficulties
Oracle Wu Chengyang: Oracle is a cloud player
Hot news this week
Templates for creating new Twitter in the future? Musk's praise of WeChat has triggered a heated discussion on the whole network
Tencent Music's TME live will re-screen Jay Chou's concert on may 20 and 21
Sony's new LinkBuds S headset parameter exposure: only 4.8 grams of comprehensive battery life 20 hours
Weak demand in the mobile market! Domestic shipments of mobile phones fell 40.5% in March to a two-year low
Henan 4 village bank line cannot withdraw cash? CBRC responds! The public security organs have registered an investigation
Baidu: In 2021, an average of 56 billion malicious information of all kinds will be intercepted every year
"Chinese version of LV" is re -executed 680 million! Reporting the property clues of the chairman, up to 8.66 million yuan
Still did it! Canada has banned Huawei and ZTE from participating in the country's 5G network on "national security" grounds
Pig companies continue to increase technology, just launched the smart pig farm, another 100 million to set up a technology company
The Jingdong Express bulk order sent to Shanghai across the country is completely static? JD.com: Not true No such information has been published
The most popular news this week
The domestic screens are rolled to the 2K screen. Why don't Apple follow the roll?
B station was exposed to layoffs: involving games, overseas business, OGV and other departments
Continuous business adjustment? Ali has been exposed to many sectors layoffs, and the scale of spring recruitment has shrunk sharply
Exposure of Tencent's game business or layoff 10 %: CSIG business group has previously layoffs 15 %
Meizu 19 series coming? Meizu mobile phone appearance patent disclosure: the return of secondary screen
Jingdong crowdfunding 10000mAh mobile power supply: with Apple Lightning and Type-c dual wires
Mobile phone chip CPU energy efficiency ranking: it is comparable to A14
What can we learn about m& # 111nkeypox cases in many countries around the world?
Alibaba Daniel Zhang connects 300 platform merchants: do more practical things for merchants
At the age of 58, he was elected as the chairman of Everbright Bank! Former President of Bank of China and Construction Bank