For the future Zen 4 architecture, AMD has also publicly confirmed many times that it is in the process of design, the process is uncertain, and there is a high probability that it will advance to TSMC 5 nm. 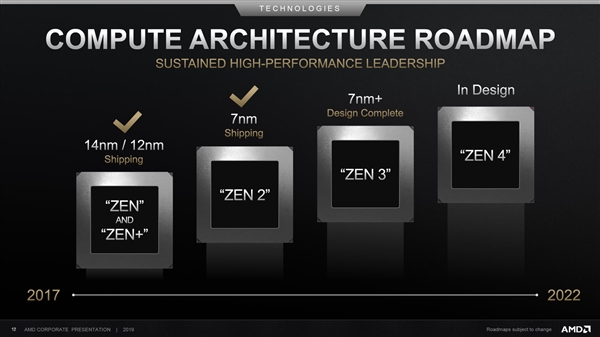 Mark papermaster, amd CTO, recently confirmed in a tubing video that the Zen 4 and Zen 5 architectures are being designed and developed by two independent teams, which is the first official recognition of Zen 5 by AMD.

The 7nm Zen 3 architecture will undoubtedly be the fourth generation Ruilong 4000 series on the consumer side, and the data center end will be the third generation Xiaolong codenamed "Milan" (Milan).

According to the information disclosed in the latest road map,The third generation of Milan Xiaolong has completed the streaming film in the second quarter of this year and is expected to be officially released in the third quarter of 2020.

Its basic specification is very similar to that of the current Rome second generation Xiaolong.It is also the DDR4 memory, PCIe 4.0 bus and SP3 encapsulation interface. It continues to maintain platform compatibility, and seems to focus on architecture optimization and performance improvement.

The next four generations of Zen4 architecture, named``Genoa'' (Geneva), will not be released until 2022, but waiting is worth waiting. At that time, a new SP5 platform will be seen, while the specific specifications are still in definition, but DDR5 memory, PCIe 5.0 bus will almost certainly be seen, and there should be more advanced InfinityFabric interconnect bus. 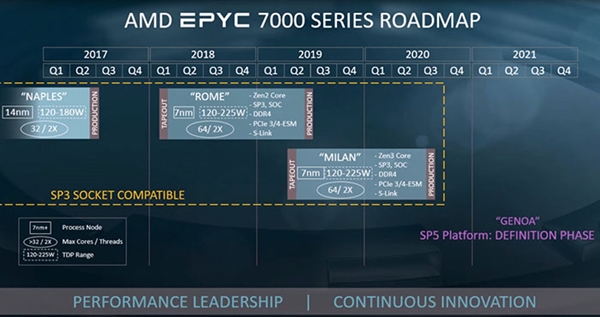 According to the current law, the Zen 5 architecture of the five generations of Xiaolong is basically locked in 2023.

As a result, between the Zen 3 / 4 architecture in 2021, at least the data center platform AMD has no new product. On the one hand, the design of the new platform will certainly take more time and effort, on the other hand, the old platform will have to maintain a long enough life cycle, which is more obvious in the field of data center.

In terms of competition, evenIf you can catch up with or even overtake in 2021, AMD will not be too anxious because of the rivers and mountains that have been laid down in recent years, not to mention the fact that the latter Zen 4 is definitely a super move.

In addition, Zen 5 may not be the last battle of Zen architecture.Maybe there will be Zen 6.. Even by the end of Zen 5, the successful architecture will last for five generations, at least six years, and live a long life. 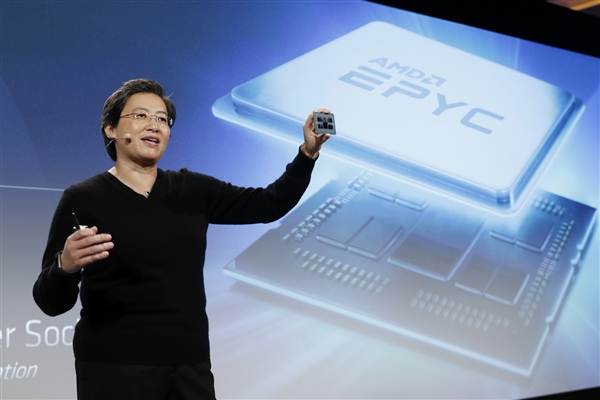 Related news
AMD confirms the Zen 4 architecture 霄龙 codename "Genoa": There is also Zen 5
AMD Zen 3 Architecture Design Completed: One Drag Four!
Amd Zen 4, Zen 5 architecture advancing synchronously: a new platform in 2022
The official confirmed that the Zen 5 architecture is one of the most longevity CPU architectures for AMD
Hot news this week
At least 29000 facilities were affected, and WeiUnicom announced that there were serious loopholes in QTS and QuTS hero.
The source code of the official website shows that the Microsoft Build 2023 developer Conference will be held on May 23-25.
The rendered picture of Meizu experience Center is exposed: there are cars and mobile phones to build 1000 stores.
Musk, the richest man in the world, also suffered a huge loss when he bought bitcoin by Tesla, who "cut leeks".
256G is not enough! Bloggers bought Xiaomi phone 512G has used up more than 300G: WeChat accounted for 70G
Xiaomi tablet 6 key specifications steal run: high brush domestic screen Snapdragon 870 can also play!
Beihang Professor unveils FIG Leaf, consumer anger, Why is advanced technology difficult to win user recognition?
Regret that the medicine is gone! Apple closes downgrade channels for multiple versions such as iOS on 16-15-12.
Only high-end models have? The exposure of the periscope camera lens is limited to the iPhone 16 Pro Max
Meta earnings release analysts: Snap turning profit into loss in the fourth quarter is good news for it and Google
The most popular news this week
Microsoft's new version of Bing appears briefly: full access to ChatGPT
Bill Gates: the history of ChatGPT is as significant as "PC or the birth of the Internet"
There is a character recognition function in Wechat, which is more convenient and practical than a dictionary! Have you ever used it?
EBay announced that it will cut 500 jobs, accounting for about 4% of its total workforce.
Why does the United States keep cracking down on Huawei, but we don't do anything to Apple?
Samsung promises firmware update to solve the problem of plummeting Pro SSD health value
AI such as CEO:ChatGPT, parent company of "GTA5", will raise standards in the game industry.
Huawei's entry into the electric bicycle Tailing official announced that the combination of strong and powerful forces will open a new era.
Huawei P60 appeared and ran: it was quite unexpected to carry the processor.
Yingchi set foot in the game display for the first time: 27-inch 2K screen, 165Hz high brush