And this situation, since the "sell-off" HNA failed to bear fruit, has become more and more prominent. This time, Li and Yu "scratched their faces" in the middle of the night and blamed each other, and their intensity was even more intense than ever. In the storm, how will Dangdang be affected? Where will the 20-year book ecommerce go after the storm? 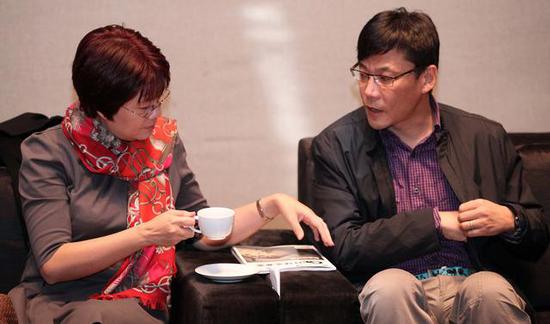 "Husband and wife shop" in the storm

Francis Chan, Yu Yu "tear each other" storm is still continuing, the cause of the 23 evening, Yu Yu "angry" Francis Chan's WeChat screenshot, spread on a number of social platforms, thus causing a stir in public opinion.

At noon on the 24th, when the official direction of the Daily Economic News reporter confirmed that the circulating screenshot of Yu Yu is "true."

Regardless of the storm, in fact, the contradiction between Li and Yu has long been made public. In an interview with the Daily Economic News in early 2019, Chen Lijun, vice president, said: "National Day has actually faded out of management for more than three years, and now Peggy (Yu Yu) is chairman."

"This is the result of the two men's consultation and our choice." Chen Lijun said, "Dangdang has a core. We don't care about the founders in order to be better. If we think Yu Yu is better at leading the company, we will choose her. The two husband and wife are also highly consistent in terms of negotiation. "

Now it seems that Li and Yu's "high consistency" has long been broken.

However, according to Kai Xinbao, Yu Yu and Francis Chan currently own 64.20 percent and 27.51 percent, respectively, making them the first and second largest shareholders in Dangdang, and still do not change to the objective reality of Dangdang's "husband and wife store."

From the beginning, Dangdang was the common crystallization of Francis Chan and Yu Yu. In 1999, Francis Chan and Yu Yu launched Dangdang, a former Peking University figure and a typical Wall Street "rich girl". The combination of the two made Dangdang full of imagination space for a while. Specific to the division of labor, the former is responsible for internal operations, while the latter involves capital operations.

Ten years of struggle, on December 8, 2010, Dangdang landed on Nasdaq, thus becoming the first B2C e-commerce in China based on online business and listed in the United States. On the same day, Dangdang's share price doubled from $13.91 to $29.91, with a market value of $2.3 billion. Since then, it has exceeded $2.6 billion.

However, on the eve of the listing, Dangdang encounteredJD.COMThe surprise attack of. Their base camp suffered a surprise attack, Francis Chan separated response, will "take retaliatory response."

Price war, advertising war, expansion war followed. After saying goodbye to "small and beautiful" and embracing a big and comprehensive strategy, Dangdang not only fell all the way down gross margins, but even lost money two quarters after it went public.

At that time, a former Dangdang management told the media that Dangdang's problem was precisely the swinging of strategy. Dangdang was known for its strategic conservatism in the industry and Francis Chan for saving money. Dangdang did not follow suit when JD.com dramatically expanded department stores and sales in the form of "loss-of-money financing." when VANCL got several times annual sales at a high advertising fee, Dangdang did not follow suit.

On June 29, 2012, tired of the battle, I settled in Tencent QQ online shopping mall Book channel, and four months later, I settled in tmall mall and officially quit the front-line platform battle. Li Guoqing tweeted: "yes. Who makes people have a lot of traffic? "

It's after the war, and it's killing me. However, this does not affect its 2013,2014 has rejected baidu and tencent out of the olive branch. Eventually, when privatised in september 2016, the market value was just $560 million, less than a quarter of its peak.

Cao Lei, director of the Electronic Commerce Research Center, once told the Daily Economic News that Dangdang also wanted to return to A shares after delisting from the United States, but the threshold for listing A shares was relatively high, Dangdang's development potential and profits were limited, coupled with strong rivals such as JD.com and Ali, it was almost impossible to list separately.

Dangdang was given a valuation of 9 billion yuan (say 7.5 billion yuan) in the "selling" of HNA. Compared with the US $560 million at the time of delisting, though Dangdang's market value has been greatly improved, compared with its unique past, Dangdang's golden age is gone forever. 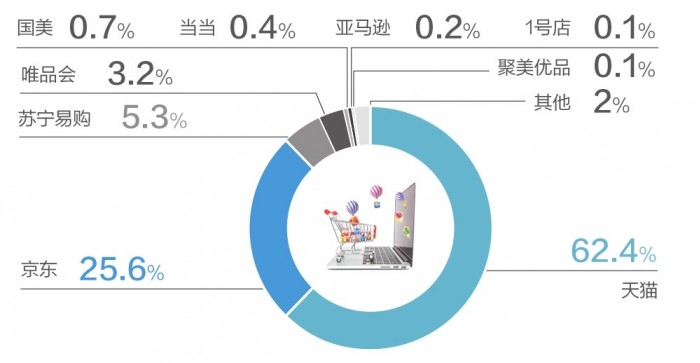 Data source of B2C market share of online retail in China in the second quarter of this year: Analysys Analysys Zou Li Cartography

Where is the 20-year old store going?

In the storm of Li and Yu, Dangdang, the 20-year-old shop, is lonely. The escalation of the contradiction between the two sides also hides the festive atmosphere of the original store celebration.

In fact, after privatization, Dangdang's financial situation can be said to be good.

According to Dangdang's forecast, operating profit can reach 610 million yuan in 2019, due to the capital situation, financial income will contribute another 100 million yuan. At the same time, Dangdang stressed that there is no debt.

In February this year, Yu Yu also told Caixin as Dangdang's "speaker" that there may be three directions in Dangdang's future: one is that Hong Kong is listed, but there is no timetable at present; the other is to learn.HUAWEIDo not go public and become a small and strong private company; third, meet the right buyer, consider selling or accepting investment again.

No matter what the development direction, 2019 is a "key year".

However, in the light of this storm, can Dangdang continue to be stable and far away?

Ding Daoshi, an Internet observer, told the daily economic news that after the incident, the whole capital market's confidence in Dangdang would decline. In this context, the expectations of partners, suppliers and consumers will be affected. At the same time, if both sides continue to release the "black material", it may increase the uncertainty of Dangdang's survival in the future.

He added: "if [Dangdang] wants to revive in the future, it should be completely separated from the two and the new directors should restructure the company structure, but it is very difficult for the time being."

"In fact, I don't think it has much influence, even let Dangdang return to the public opinion and public vision," Tang Xin, an independent analyst, told reporters. He further pointed out that the negative impact was only limited to the personal evaluation of the parties, which had little to do with the reputation of the enterprise, and believed that the storm would soon subside.

In addition, he said Francis Chan has left Dangdang and will have less influence on Dangdang in the future.

Zhao Fei, a Shanghai citizen (not his real name), also told reporters, "what's the impact of this?" it won't affect his continued purchase of books on Dangdang.

On the other hand, Francis Chan's entrepreneurial project, Reading sooner or later, has once again attracted attention. In Tencent's previous "aggressive dreamer," Francis Chan also introduced the project, saying that "sooner or later reading" outpaced Dangdang in three years at the earliest.

The reporter inquired and learned that the operation subject of "reading in the morning and evening" is "Tianjin wanjuan Book Network Technology Co., Ltd" (hereinafter referred to as Tianjin wanjuan book).

According to industrial and commercial information, the legal representative of Tianjin ten thousand volumes is Francis Chan, whose shareholders are Liu Haoyu, Francis Chan, Tang Xianhui, and the subscribing amounts of the three are 20 million yuan, 500000 yuan and 29.5 million yuan, respectively. In other words, the proportion of shares held by Francis Chan is only 1 percent, and the majority shareholder is Tang Zhihui. According to the data, Tang Yuhui is associated with Francis Chan in Shaanxi Dangdang Film and other companies.

Related news
Francis Chan has filed a petition with the court and Yu Yu divorced: asking for an equal share of Dangdang shares
Francis Chan, Yu Yu husband and wife tear each other Dangdang network 20th anniversary celebration adds to the worry
Li Guoqing staged "the temptation to go home ", Dangdang net: the farther you are the bette
Grab the official seal and seize the control of the company! Li Guoqing and dangdang.com jointly declared that they would fight against each other to the end
Li Guoqing: 20 years of entrepreneurship, deeply felt the biggest shame of the Internet
Progress of official seal incident of dangdang.com: Police judge that Li Guoqing has no illegal act
Hot news this week
Behind the exposed layoffs, China has praised the loss growth, and the stock price has fallen 67% in three months.
The news said that the Wi-Fi7 chip uses a 7/6nm process to stimulate QFN packaging and aging testing needs
Alipay life channel 20 million people see Wufu Sheng Xiaoka lottery live, fans: difficult for the public
The U.S. government is introducing new policies to attract international students in fields like science and technology
The U.S. Senate Committee passed the tech antitrust bill, and giants such as Apple and Google rose to the challenge
It has been exposed that it will be acquired by Tencent: the Black Shark 5 game mobile phone is officially announced!
China has successfully developed the world's lowest power phase change memory: a thousand times lower than mainstream products
Microsoft Apple Meta seizes the XR market, the Samsung of the fillet folding screen mobile phone or wants to catch up
K50 e-sports edition opponent is coming! A new Chinese phone released in February: it claims to be the best gaming phone
Station B Bilibili 2021 Top 100 UP Main Selection: 63% of new entrants, double the proportion of scientific and technological knowledge
The most popular news this week
7 years! The classic control panel doesn't die: Windows 11 takes another step back
All color renderings of the Samsung Galaxy S22/Plus/Ultra flow out
Indian smartphone shipments increased by 12% of China's reputation points near 68% share Samsung plans to add code
Three months after launch, Microsoft is "happy" with Windows 11: more successful than previous systems
Google announces the abandonment of FLoC: launches a new Topics API to replace third-party cookies
Reveal the "land Probe 1 A star" space autopilot: "time and space revisit" to predict geological disasters
Circle of friends can send more than 9 pictures weChat iOS version 8.0.18 official version of the new content public
Douyin push incentive plan: carry forward China's excellent traditional culture
Common software is spitted in an amazing: mobile phone app memory
A rocket launched by the United States 7 years ago was about to hit the moon and self-destruct: the speed was staggering