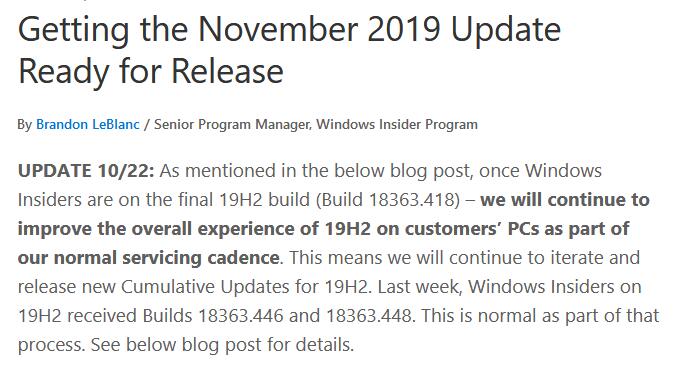 In the latest blog post, Microsoft is clear that it will continue to improve10 experience of novamber 2019 (version 1909) function update, promoting the version update of 19h2 with "regular service rhythm".

"This means that we will continue to iterate and release new cumulative updates for 19h2," the company said. In other words, build 18363.418 is not the final version obtained by consumers. When it was officially released in November, it was not clear which version number consumers would get. Microsoft explained in its October 22 update: "once Windows Insider members get the final version of 19H2 (Build 18363.418), we will continue to improve the overall experience of 19H2 on customer PC as part of our normal service rhythm. This means that we will continue to iterate over and release new cumulative updates to 19H2. Last week, Windows Insider members at 19H2 received Build 18363.446 and Build 18363.448. This is a normal link in this version change. "