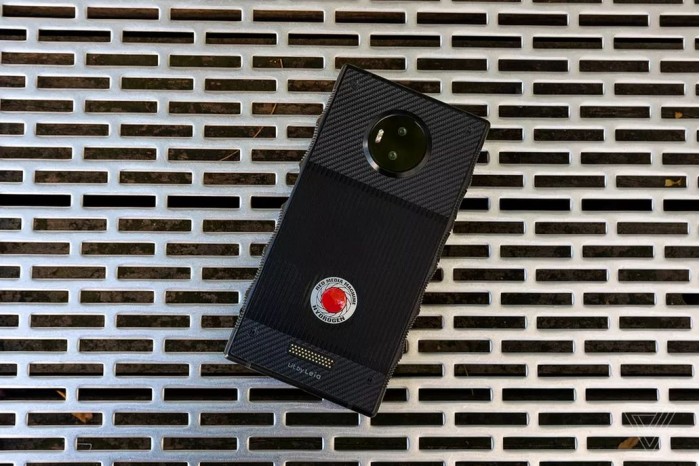 RED Hydrogen One is the first intelligence launched by REDMobile phone, retail $1295. It was first released in 2017, promising to use "holographic screen", top camera system and modularity fittings of a machineAnd other cutting-edge new technologies, but due to multiple delays until October 2018 in the beginning of shipment, and the response of users has been mediocre.

One of the highlights of red hydrogen one is that similar to moto mods, additional modules can be added on the back of the phone to expand the experience of using the phone. These modules were initially promised to go online by the end of 2019, but in March this year, all module pages were quietly removed from the red official website.

Then in April this year, the titanium version of red hydrogen one was finally released. In an interview in July this year, jannard said that the main reason for the multiple delays was an anonymous Chinese ODM (original design manufacturer), saying its products could not meet the demand of red, and the ODM "could not" solve the problem.

In July, jannad said that the focus of the current development has been on hydrogen two, and said that the camera module promised for a long time can be used on the first two generations of mobile phones. Hydrogen two is a collaboration between red and new ODM manufacturers, almost "from scratch". Jim jannard says the new ODM company is clearly better at creating and supporting the products we need.

Jim jannard said that the previous Chinese ODM manufacturer "cannot fully fulfill the company's requirements and fulfill the previous commitments". Now red is developing its own film camera module. The new camera module, known as Komodo, should "go far beyond" the one originally planned. Jannard said that although it could not compete with the existing high-end red camera, its goal was to "get the highest level of video camera image at a lower price."

Users who have already purchased hydrogen one need not worry, and jannad promised "continued support." In addition, jannad has also warmed up the Komodo 6K, a new camera to be launched by red, and will cooperate with hydrogen one in some way. But in any case, red's abandonment of the hydrogen mobile business is a disappointing outcome.

Related news
Brushing and shaking hands on the 43-inch vertical TV experience? Samsung launches The Sero TV (picture)
Tencent CSIG Creates Enterprise & Government Business Line
Hot news this week
Monkey acne cases have ranked first in the world that the United States has announced the emergency state of public health
Credit card points rule intensive adjustment online transaction points more "valuable"
High reserves and low cost experts: calcium ion batteries replace lithium batteries to stand up to the daily
Alibaba executives interpret financial results: the focus of the consumer side is no longer to attract new, but to do a good job in stratified operation
Losses in a single quarter of $ 23.4 billion a record, SoftBank did not carry the plunge of technology stocks and the devaluation of the yen
The prevention and control of the American Monkey epidemic has failed. What should I pay attention to?
Sources say Samsung's Galaxy Z Fold4 is going up in price: a 512GB top unit will cost more than 13,000
Is the micro -business headache? WeChat friends are suspected to have a big move: 7 can only be posted a week
Kuaishou launched a self-developed cloud intelligent video processing chip: The chip has been streamed successfully
The new product of Xiaomi MIX is coming: both internal and external dual -screen has been upgraded to make up for the previous generation.
The most popular news this week
Do you get enough sleep every day? Girls get the worst of it: Put down your phone
Baidu account online rename function: those unbearable network names can finally be replaced
The outstanding student secretary went behind the scenes and Gree successfully registered the trademark of "Pearl Feather Child"
Ali's largest shareholder sells 34.5 billion US dollars: completely losing the board seat
Meizu Pandaer Great: All products are reduced by 200 and 30 -containing mobile phone cases, heat dissipation back clamps
Domestic brands killed 5999 yuan folding screen phones this year bucked the trend: up 73%
Xiaomi House clerk was exposed to the official response of customers' mobile phone consumption
The laptop is almost burnt by the fire, but the hard disk data can be restored 500GB per day
China's first law bans mobile phones from schools: including children's phones and watches
The second China-led international standard for unmanned aerial vehicles has been officially released