Cook: there are now 1/3 or more Apple Store customers using the old for new program 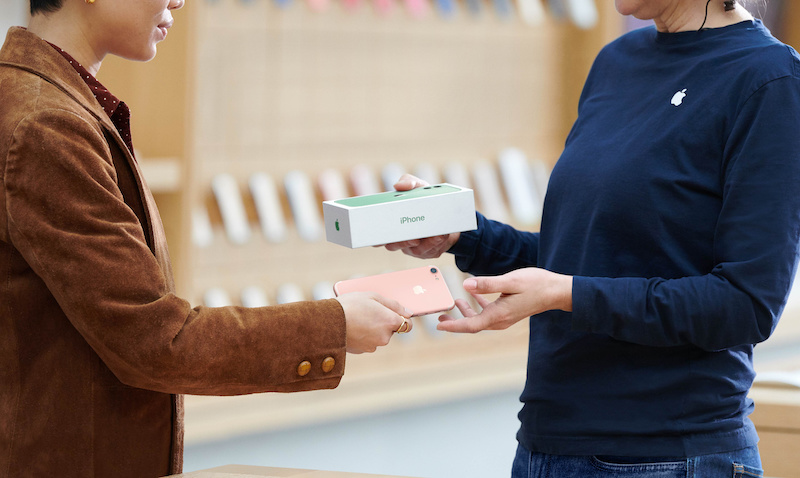 Apple has aggressively promoted it in its retail stores and websites. IPhoneold for new service plan。 Cook said the move was becoming more and more effective, noting that 1/3 or more customers visiting its retail stores ended up trading in exchange for old equipment for new equipment.

"This year, we're really getting consumers to think about trade in," he said. As many as one-third or more of the people who enter our store to trade, and that number is rising. " Apple's current discount in the U.S. ranges from a maximum of $100 for the iPhone 6S to $600 for the iPhone XS max, and varies in other countries.

When asked if Apple had any plans to encourage more third parties,partsAs manufacturers improve sustainability, Cook said Apple is considering introducing a label or label that indicates that a particular product meets certain environmental standards, whether the iPhone case or other products.

He said: "[... ]This is what we are talking about. I don't want to announce it in advance. " Environmental labeling may only apply to Apple Certified hardware, such as lightning data lines licensed through the MFI program.

Since this week, Apple has won an Ceres award for its sustainability initiatives. Since 2018, all its retail stores, offices, data centers and other facilities have been powered by 100% renewable energy. Apple also has a recycling robot called Daisy, which can disassemble 200 iPhone. units an hou

Apple has a more ambitious long-term goal of building a closed-loop supply chain that will be able to stop using mined raw materials and make new products entirely from recycled materials. Cook said he was "not worried" that Apple would eventually come up with a way to achieve this feat.

Related news
Apple Stores around the world will reopen on Friday
Cook: there are now 1/3 or more Apple Store customers using the old for new program
Tim Cook unveils Apple store in Sanlitun
What will Apple Store change in the future after 20 years of operation?
Hot news this week
The company announced the shipment data of 2021 Q1: the proportion of Huawei fell to the sixth place in the world at 4%
Sony's third generation noise reduction experience: comparable to the strongest combat power of real wireless noise reduction headphones
Henan satellite TV "Dragon Boat Festival wonderful tour" full version popular all over the network: netizens call content amazing
New people to do "new" business: preparing for the battle with Zhang Ying, a peach farmer in Yangshan
In depth cooperation with Huawei real hammer! BYD open recruitment of "Hongmeng development engineer"
An 18-year-old Japanese female painter is popular, and her painting level of mobile phone software is beyond imagination: beauty makes netizens sigh
In 618, big promotion came, beware of the trap of cheating by taking advantage of the official SMS of charging companies' platforms
Dragon Boat Festival colorful Luoshen amazing interpretation of underwater flying netizen: too beautiful, lost the language
Can you travel around the world without leaving home? Jingdong 618 Jingdong International gives you a fancy "flying" strategy
During the period of 618, Jingdong will issue a total of 10 billion consumption vouchers, which have benefited consumers in 14 places such as Beijing and Zhejiang
The most popular news this week
Yixin technology won the honor of "2020-2021 (4th) China IC unicorn"
Which brand of vacuum cleaner is better? Who should buy vacuum cleaners and floor sweeping robots at the same price?
Shenzhou Wentian wechat adds time limited status "rush"
A moment in history! The successful launch of Shenzhou 12
Airpods 3 will be launched this year! Apple executives hint: it may integrate the bracelet function
The first man after Bill Gates! Microsoft CEO NADELLA will also be chairman of the company: the first time in 20 years
Domestic mining fails Huaqing: the price of graphics card is falling
The couple's "love insurance" was refused when it was due
Good news! 360 government enterprise security group won the bid of 236 million yuan national network security industry base major infrastructure group project to build Zhengzhou security brain
Peng Xiaobo: China's rocket launch cost may be lower than SpaceX in 2025